Despite the global financial crisis and high-profile scandals, money continues to flow at the highest end of the art auction market. Anna Cristina Pertierra looks at why

Trust and clarity: auctioneer Tobias Meyer takes a bid of US$14.5 million for Matisse’s Nu Couché Vu de Dos at Sotheby's in New York in May 2006. Peter Foley/EPA 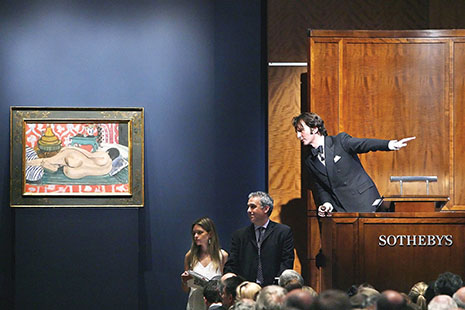 Trust and clarity: auctioneer Tobias Meyer takes a bid of US$14.5 million for Matisse’s Nu Couché Vu de Dos at Sotheby's in New York in May 2006. Peter Foley/EPA

The Dynamics of Auction: Social Interaction and the Sale of Fine Art and Antiques
By Christian Heath | Cambridge University Press | $115

THERE is a cosy and largely unremarkable genre of British daytime television, usually relegated to the early afternoon timeslots that busy people rarely notice, which revolves around the buying and selling of antiques and collectibles. Members of the public will search for antiques in various places (usually at markets, sometimes in their own homes), before bringing them to auction in the hope of making a small (often very small) profit. These shows are not at all glamorous. They are set in small towns and middle-class neighbourhoods and their presenters tend towards the eccentric. It is not uncommon for competitors to go home with just a few pounds, or even to end up making a loss.

But the programs do have a quiet allure, principally because the viewer is always aware that the next item might turn out to be worth a small fortune. For me, they evoke intense nostalgia; as a student in the deepest throes of procrastination, I would often sit on my ragged sofa, cup of tea in hand, and guiltily watch episodes of Bargain Hunt or Cash in the Attic, telling myself that I would get back to the thesis just as soon as I had seen how much the next teapot fetched.

The auction process lends itself well to television. Viewers quickly learn the backstory of any item brought to sale and then become invested in the outcome. As bids increase, suspense steadily builds; the process can be strung out, according to the requirements of the next commercial break, or swiftly culminate with the fall of the hammer. In the real world, too, auctions have become an increasingly popular way to buy and sell, and have come to dominate the trade in fine art and antiques. But what are the elements of auction that make it so compelling for both buyers and sellers, not to mention for the many people employed by the auction houses and their associated businesses?

This question is considered in quite some detail in Christian Heath’s new book The Dynamics of Auction. Heath, a professor of work and organisation at Kings College London, tells us that although auctions date back to the Romans, the structures and customs that we’re familiar with mostly developed in post-medieval Western Europe. By the first half of the eighteenth century, the British auction house looked more or less as it does today: having examined a detailed catalogue of goods for sale, buyers had their bids for furniture, merchandise, art or collectibles managed in a public process by an auctioneer. This stability of form means that auctions are a reassuringly familiar way of making sales at great pace and across a variety of situations.

In Heath’s words, “Auctions provide a solution to a social problem.” They offer a speedy and transparent way of selling goods using a process that can work equally well for items that sell for a few dollars or those worth a few million dollars. In contrast to some popular representations of auctions as dangerous or unpredictable, Heath emphasises how important it is for auctions to be seen as trustworthy and legitimate. These very public performances of buying and selling, played according to long-established conventions, render transparent the inherently unstable act of negotiating a sale between strangers for an item that may be unique. The trust and legitimacy comes not only from the reputation of the particular auction house, but also from the very specific actions and interactions that happen at auctions. The words, gestures and practices of everyone involved in the auction happen in particular and recognisable ways.

Heath provides several chapters of closely studied examples of how the people who make up an auction — the staff of an auction house and the potential buyers in the room — interact in a nuanced way to preserve trust and transparency. Auctioneers must practise a finely honed craft of managing bids: first enticing reluctant bidders, then accepting bids according to a strictly “first in” basis, working to “establish a run” back and forth between two bidders to move the price steadily upwards. Only when a run is exhausted will the auctioneer turn to other bidders waiting to jump in. Such rules are observed not only through words, but also through gestures, as auctioneers sweep their arms and move their bodies from left to right. Being attentive to bids can be made harder for an auctioneer by the equally nuanced physical behaviour of customers; while bidders obviously need to catch the attention of the auctioneer, they often want to keep others in the room from knowing their identity or level of interest. While overseeing the current run of bidding, an observant auctioneer will notice how a potential bidder in the audience moves his pen, or shifts her body slightly in preparation to raise her hand.

The auction’s need for clarity can be seen most vividly at the moment of the strike of the hammer. “It is not a sound that can be sustained,” writes Heath, “and serves to mark the precise moment at which the contract is concluded,” rendering the conclusion of the sale transparent to all in the room. With bidders having been warned by the auctioneer that a sale is imminent (in itself another chapter’s worth of discussion from Heath), there can be no going back once the hammer has struck.

As Heath explains, economists have for some time puzzled over one seemingly illogical aspect of the auction’s popularity: the winning bidder must always know that he or she has paid a higher price than anyone else thought an item was worth. Why, then, would a purchaser feel satisfied with the price paid? While there are occasional cases of buyers trying to backtrack, or pushing for the price to rise in smaller increments, on the whole the conventions of the auction seem to discourage this from becoming a problem. In practice, at least, the “winner’s curse” doesn’t seem to have diminished the popularity of auctions and auction houses.

Although recent years have seen several of Britain’s best-known auction houses take hits from the global financial crisis, and suffer the odd scandal, money continues to flow even at the highest end of the auction market, in the selling of art for many millions of dollars. While more established art markets may have receded, art is as subject as any other commodity to the trends of the global economy; the areas of fastest growth in high-end art are now largely prompted by the desires of wealthy buyers from Russia, Asia and the Middle East. The emergence of online auctions, and the introduction of online bidding as well as telephone bidding in the standard auction house, have also contributed to the globalisation of auctions in the contemporary era.

The Dynamics of Auction doesn’t dwell exclusively on the most expensive end of the auction market; much of the study concentrates on the more frequent sales of curios and collectibles in small auction houses across the smaller towns and regional cities of England. It is a careful and detailed book, but it does not make light reading for the casual browser. It is likely to be of greatest interest to researchers looking to replicate Heath’s methods for tracing and analysing the social moment of the auction. He and his team recorded video footage of hundreds of auctions across Britain, and studied the footage to identify what is common in the minute actions, gestures and inflections of phrases that make the auction what it is. The project represents a kind of sociology that retains a deeply empirical focus — working from extensive data to construct its argument — but which also understands the seemingly minor nuances of everyday interactions that we must all learn in order to participate successfully in social conventions. It is hard work to carry out — and not always easy work to read, even when written as clearly and structured as neatly as the work of Professor Heath. Much easier, perhaps, to sit back and watch another auction on the telly. •

Anna Cristina Pertierra is an ARC Postdoctoral Research Fellow in the Centre for Critical and Cultural Studies at the University of Queensland. 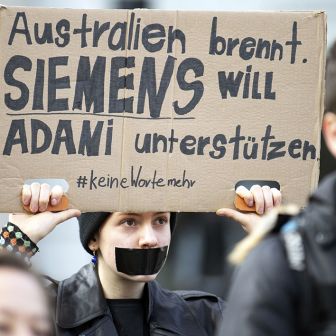 Correspondents How Australia’s love affair with coal looks from afar, and why it matters Klaus Neumann 4 February 2020 Europeans have been watching Australia’s bushfires and climate change policies with growing dismay 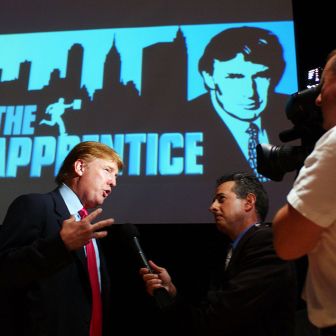 The land of the long white mirage 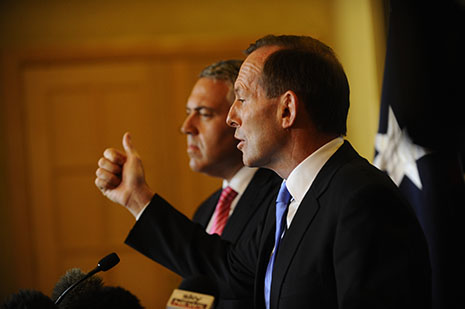