Wintry thaw on the Korean Peninsula

Can the major powers capitalise on the shift in North–South relations? 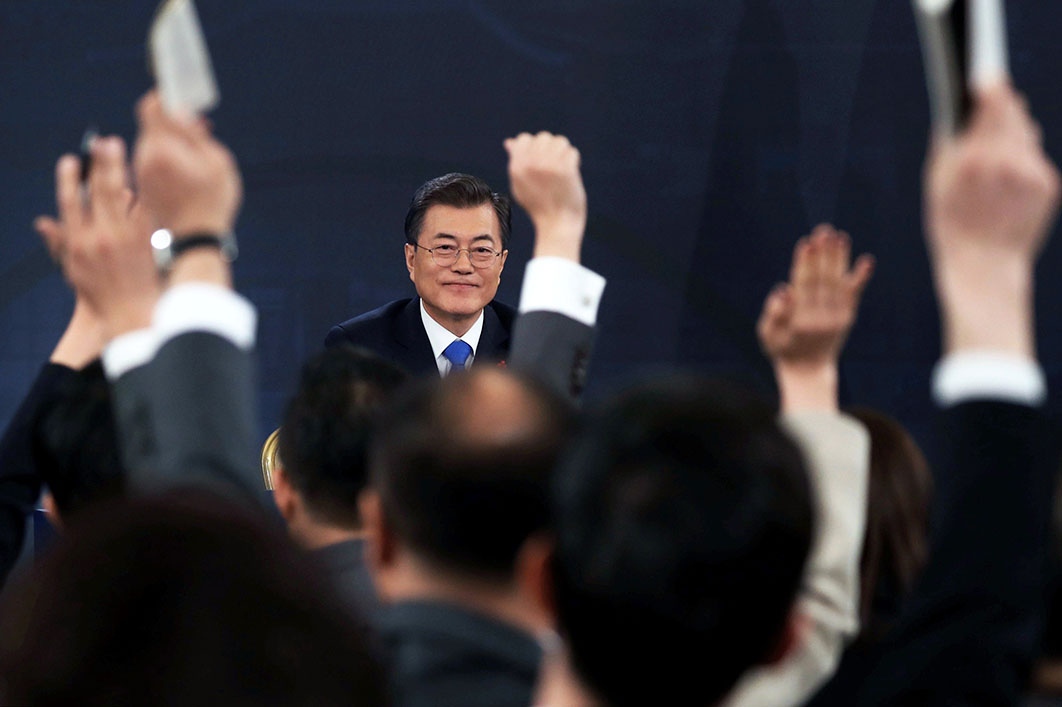 As tensions continued to mount late last year, and Kim Jong-un and Donald Trump traded insults and boasted about the size of their nuclear buttons, the international community was increasingly fearful that a miscalculation could bring the Peninsula — and the region with it — to a full-blown military conflict or, worse, a nuclear exchange. Then came Kim’s New Year message. While the North Korean leader vowed to proceed with his nuclear and missile programs, he also offered to talk with the South, ostensibly about the possibility of the North’s participating in the upcoming Pyeongchang Winter Olympic Games.

When they took place earlier this month, those talks resulted in a number of agreements. North Korea undertook to send athletes, an art troupe, a cheer squad, a Taekwondo demonstration team and a press corps to the Games. The two countries’ sporting teams will walk into the stadium under one flag during the opening ceremony and will form a single women’s ice hockey team to compete. North Korea has also agreed to restoring the military hotline between Pyongyang and Seoul and engaging in further discussions about other bilateral issues.

But the North’s delegation rejected any discussion of nuclear and missile issues, claiming that its weapons are aimed solely at the United States — not at its brothers in the South, or at Russia or China — and so fall outside the bilateral relationship. Nor did the North Korean delegation accept the South’s proposal to open talks on possible reunion of divided families.

So far, the Trump administration has endorsed the inter-Korean dialogue and welcomed the thaw. Washington also accepted Seoul’s proposal that the annual spring joint military exercises be delayed for fear that Pyongyang could regard them as a provocation and withdraw from the Games. Trump went further, taking credit for the resumption of the talks and claiming that his firm stance had contributed to the current thaw.

In turn, South Korea’s president Moon Jae-in praised Trump for his role in the run-up to the talks. He also pledged to work with the United States, and with the other major powers in the region — China, Russia and Japan — to bring about denuclearisation and ensure stability on the Peninsula.

The reduced tension, the momentum generated by the talks, and the prospect of future meetings on a range of issues — all are welcome developments that could also open the door for multilateral talks about the North’s nuclear weapons. But a number of difficult issues — emerging as well as outstanding — remain.

There is already concern that Kim Jong-un’s charm offensive is designed not only to gain breathing space to deal with the devastating impact of UN sanctions but also to drive a wedge into the US–South Korea alliance. As analysts have pointed out, the pattern is a familiar one: determined pursuit of nuclear and missile programs punctuated by occasional pauses and extending of the olive branch.

The concern over a potential split in the alliance is partly fuelled by the widely shared perception that President Moon is more inclined towards reconciliation and stability on the Korean Peninsula than towards a more hard-edged drive to dismantle the North’s nuclear program, at least to the extent that the latter threatens the former objectives. As one of the brains behind the “Sunshine Policy” of the early 2000s under then president Kim Dae-jung, Moon places greater emphasis on carrots than on sticks in dealing with Pyongyang.

And with good reason. Despite its rather precarious position, North Korea presents a reckless and at times rather irrational posture to outside observers in order to conceal its deep fear of external threats. Internally, its “military first” strategy is seen as crucial for the regime’s survival. And threats to attack its stronger enemies using more or less suicidal means do serve as strong deterrence to attacks on the North. Its conventional capabilities — let alone its chemical and biological arsenals, and emerging nuclear capacity — could inflict enormous damage on South Korea. The Moon administration faces the same dilemma as its more conservative predecessors: what would be the acceptable cost — and likelihood of success — of an armed attempt to neutralise Pyongyang’s nuclear program?

Until recently, Washington’s calculus has been different. For the best part of the last twenty-five years, the United States has not seriously considered striking a grand bargain under which North Korea would feel sufficiently safe that it would willingly trade nuclear weapons for peace and the security of the regime. Half-measures have failed to convince Pyongyang to give up its nuclear weapons, and the regime’s own repeated breaking of pledges has only reinforced the perception that it can never be trusted. In the absence of such a deal, the North continues to improve its nuclear weapons and missile systems and is getting closer to (or perhaps is already capable of) posing a direct nuclear threat to the United States.

Washington’s other options are limited. Notwithstanding some of the more outlandish suggestions about how to subdue Kim Jong-un, military options are no longer viable, and would certainly be extremely costly. Trump’s sometimes bombastic rhetoric has not helped; indeed, his ridiculing of Kim Jong-un and his irresponsible reference to “totally destroying” North Korea have backfired spectacularly, prompting Congress to question his authority to wage nuclear war.

How long the current rapprochement between the North and the South will last is anyone’s guess. Seoul’s apparently enthusiastic embrace of Kim’s Olympic proposal has touched off strong opposition at home. Already, violent protests in South Korea have led President Moon to plea for understanding — and Pyongyang to demand apologies and, later, withdraw from the planned pre-Olympic cultural event.

But the concern over a potential split in the US–South Korea alliance may be unfounded. After all, South Korea’s security remains deeply anchored in the alliance, both militarily and in diplomatic terms. The more pertinent question now is how to seize the opportunity created by the cooling of tensions and work with the other key powers to bring about a long-term solution to the North Korean nuclear issue. It’s hard to see Australia taking any role in making the thaw more permanent, especially when Canberra seems so closely aligned with Washington on security matters at the moment, but the international community can ill afford to miss out on yet another chance. •

Jingdong Yuan is Associate Professor of International Security at the University of Sydney.