Books | Are Labor and the Greens divided by their common ground? 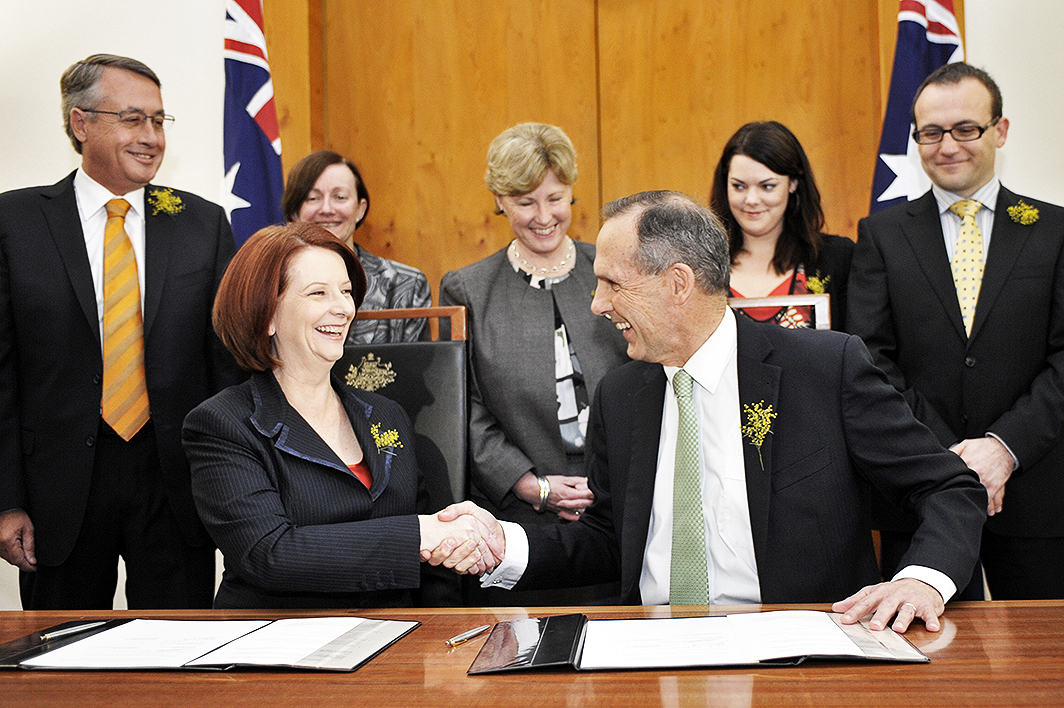 Australia essentially has what political scientists call a two-party dominant political system, with the Liberals and the Nationals generally acting as one. Minority governments are consequently rare nationally, and Greens support for minority governments rarer still. But it happened after the 2010 election, when the voters deserted an unpopular Labor government but didn’t flock to the Coalition, leaving neither party able to form government on its own.

The Greens did very well, winning a share of the balance of power in the House of Representatives and the full balance of power in the Senate. If Australia had a multi-party system, as New Zealand and Sweden do, the spectacle of Labor seeking support to form a minority government, even from the Greens, would have been thoroughly unremarkable.

By many accounts, Julia Gillard, the caretaker prime minister, did a remarkable job of locking in the backing needed from the Greens and the independent crossbenchers, Andrew Wilkie, Tony Windsor and Rob Oakeshott, to retain government. With confidence-and-supply agreements signed in return for policy concessions, that success ushered in one of Australia’s most productive governments, as measured by the amount of legislation passed. But it was precarious and under constant attack.

In Whitlam’s Children, political scientist Shaun Crowe takes a close look at what working together meant for Labor and the Greens. For the new government, working with Greens MP Adam Bandt meant working with an MP who had just taken the seat of Melbourne, which Labor had held for more than a century. This highlights one of the key challenges for Gillard and her colleagues: the fact that the Greens aren’t in parliament to work with Labor but rather, according to Greens stalwart Bob Brown, to replace it.

Social democratic parties in New Zealand and Sweden have faced the same threat and lost a share of their vote to the Greens and others over the past twenty years. Nevertheless, they have repeatedly asked the Greens to support their minority governments — most recently, in both New Zealand and Sweden, rewarding the Greens with ministries, and in Sweden adding in a formal coalition partnership.

If they’re faced with the opportunity to work together again in government, it’s to be hoped that Labor and the Greens will learn from Crowe’s insider research. The implications of his opening observation — that both parties claim Labor icon Gough Whitlam as their inspiration — is tempered by the book’s fairly blunt characterisations of the ideological, policy and political differences between the two parties.

The Greens are an ecology-centred party, with aspirations to relative purity, whereas Labor is a transactional centre-left party. The Greens are more committed to post-materialist politics and principles, whereas Labor favours “parliamentary majorities” and pragmatism. The trade-off between jobs and the environment is often a sticking point.

The book very usefully revisits the history of Australia’s party system, including the decades of multi-party politics, of which the Coalition is the last relic. Australia’s party system may seem stable, but it has been “punctuated by periods of disruption and change,” Crowe writes, often the result of strong ideological or personality splits. This retelling is compelling, comprehensive reading.

Having dealt with the Labor–Greens ideological dynamic and the party system, the remainder of Whitlam’s Children presents the responses of more than forty members of both parties to questions about the nature of their relationship. Most of those Crowe interviewed had direct experience of the Rudd and Gillard governments as leaders, ministers, MPs or senators, and they demonstrate a capacity to reflect on that experience and what it means for the future.

The Labor interviewees are not necessarily anti-environmental, but they see the Greens as impotent and naive, while the Greens see Labor as weak and unprincipled — hardly the basis for good working relations. Relations on the other side of politics, between the Liberals and Nationals, are often strained too, but are regularly smoothed over by the renewal of the closely guarded Coalition agreement after each election.

After the indecisive 2010 election, both caretaker prime minister Julia Gillard and opposition leader Tony Abbott were cautiously optimistic about being able to secure the support to form minority government. In Windsor’s Way, though, independent Tony Windsor details how much more professionally, astutely and honestly Gillard dealt with that task than did Abbott.

Ideological politics is typically brushed aside at moments like these. Functional negotiations set out to establish which parties and independents can work together, how closely, and in return for what. Concessions, often included in agreements, must typically be made by the larger party if it is to have any hope of attracting support.

Crowe’s retelling of the experience of the 2010–13 government in the words of Labor and Greens party members is an original and valuable contribution to the public record, with lessons for the future. Labor–Greens relations were sorely tested, but the interviewees generally saw the government as a policy success, as well as being “ambitious, proactive and savvy in parliament.”

Crowe finds that the Labor MPs were mostly proud of the Gillard government’s achievements. Greg Combet, for example, sees the prime minister as an excellent negotiator in challenging circumstances, and believes the government to have been capable in its dealings with the crossbench. Lisa Singh is proud of “life-changing” legislation — in the disability, broadband, climate change and education policy domains, for example — being passed in “a very short space of time.”

But there were downsides. The language used in attacks on the government, much of it levelled by Tony Abbott and the conservative media, was toxic. The parliamentary schedule was stressful. The instability and lack of control was burdensome. Julia Gillard’s leadership was eroded in public until she lost the confidence of the party. Kevin Rudd then led the government to a seventeen-seat loss and the opposition benches.

Even so, Greens MP Adam Bandt has high praise for Julia Gillard. In fact, the Greens were pretty positive about the experience of minority government, even though their vote dropped significantly afterwards. In their view, obtaining the balance of power means being able to deliver policy outcomes, and they generally see the Gillard government as “uncommonly progressive” and “uncommonly productive.”

Whitlam’s Children also details the views of Labor and the Greens on climate change, which saw the introduction of carbon pricing; on refugee politics, which saw Labor pursue deterrence despite the Greens’ vehement opposition; and on mining taxes, which saw both parties pursuing, but failing to achieve, a fairer sharing of the wealth generated by Australia’s natural resources. These were testing policy domains, where reform was exceptionally challenging.

In 2018, Australia is suddenly experiencing minority government again, so it is worth asking, as Crowe does in Whitlam’s Children, what it takes for Labor and the Greens to work together. There are ample lessons to be learnt, not only from the Gillard government but also from the decades of experiences of minority governments in Tasmania and the Australian Capital Territory, where Greens have held ministries. It is only a matter of time before this occurs on the national stage. •

Kate Crowley is Associate Professor of Public and Environmental Policy at the University of Tasmania.