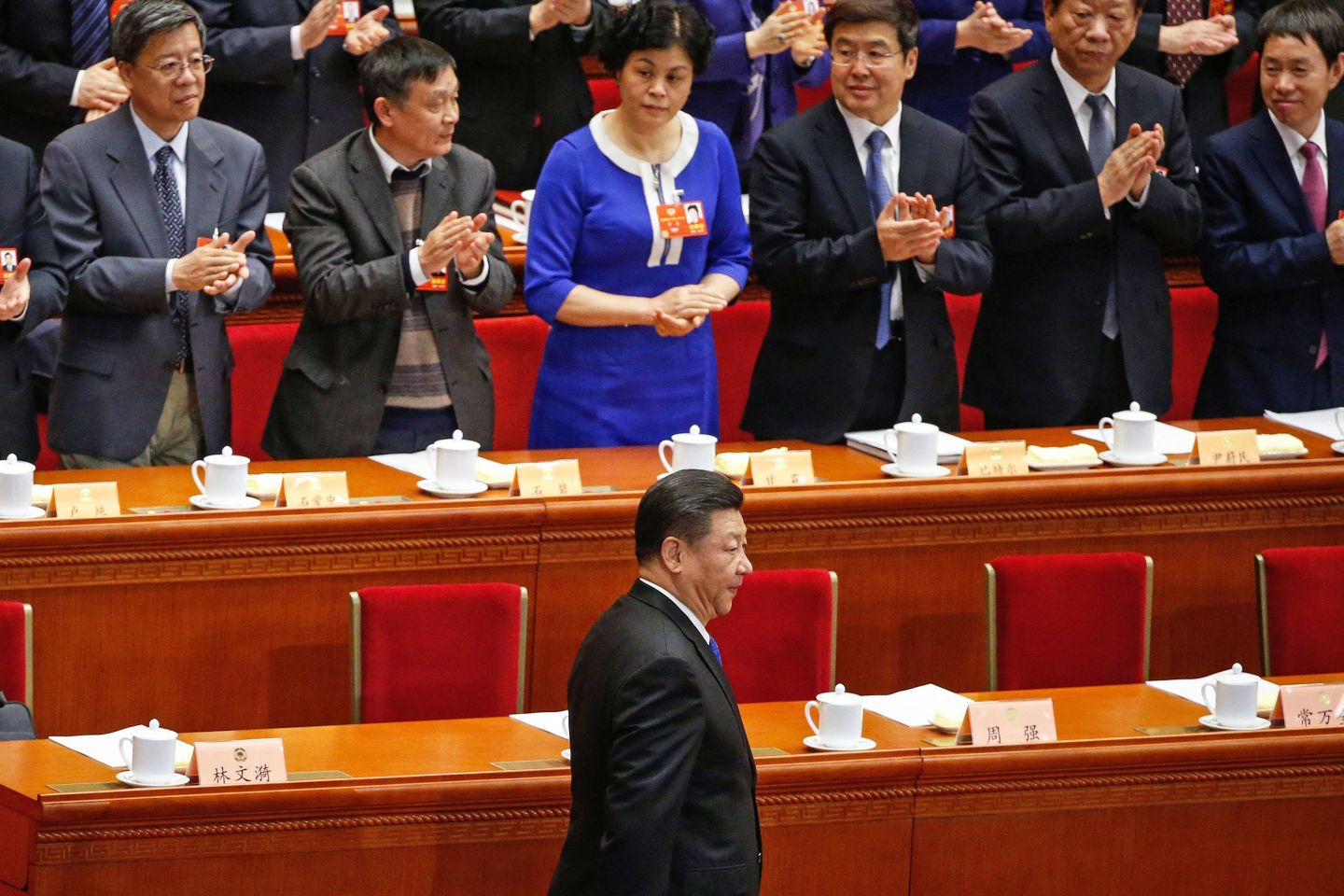 Under Xi Jinping’s leadership, China is widely seen as a strong, stable country in a process of rejuvenation under one-party rule. The world frets about the Middle East and even about the European Union; faced with Donald Trump’s maverick leadership, it worries about the future of the United States. But China seems like a still pond, its surface broken only now and then by ripples from less reassuring undercurrents. The general assumption is that Xi and the Communist Party are looking solid.

Like most assumptions, this one says as much about our own unease and fears as it does about what it seeks to describe. We see a stable, strong Xi and a stable, strong China because we want to — and in the current uncertain geopolitical plight, because we need to — rather than because they are actually there.

The lengthy critique of contemporary China published on 24 July by Xu Zhangrun, who teaches law at Tsinghua University in Beijing, reminds us, first of all, that there is never a good time to stop paying attention to what is happening there, wherever else we might be distracted. As academic Gloria Davies pointed out in her book published a decade ago, Worrying About China, the history of Sino-anxiety is a long, honourable one, and has been proved plenty of times to be prudent and well founded.

Xu’s taxonomy of issues, and possible prescriptions, gives voice to a particular strand of domestic criticism of Xi Jinping’s leadership. We knew that these uneasy observers must be there, but for most of the last few years a remarkable silence has reigned, so near-complete that it has been unsettling. Can everyone have lined up behind the party’s new strategy so completely? Where is the often chaotic and scrappy China of the past, with its many discordant voices? Has Xi’s dose of nationalism and promised national resurrection been so effective in closing down dissent?

Xu’s essay confirms that the anxiety was always present, and has indeed intensified. His diagnosis is hardly novel, though it is elegantly put and comprehensive — as comprehensive as Xi’s ideology aims to be. Points about property rights, the lack of meaningful political reform, wasteful diplomacy and foreign aid, and official arrogance and malfeasance are made with caustic precision. Xu has simply cried out that the emperor is unclothed, and that Xi’s anti-corruption campaign has been, at best, a performance, with the party carrying on unchanged behind the scenes.

Xu points to the inconvenient fact that lies at the heart of Xi’s leadership. Despite the lazy assumptions about this being an era of neo-Maoist politics, the current party elite is working in a wholly different context. In the pre-1978, pre-reform era, the social contract in China was brutally straightforward. Under Mao’s charismatic leadership, the party created its own reality (with often disastrous social results) through its control of the press, and did so with minimal accountability.

Contemporary China, by contrast, is extraordinarily fragmented, with a billion different individualised networks created by social media, and a middle class focused relentlessly on what works for them. It’s not that they are brainwashed and made docile by party messages — it’s that they have in many ways moved beyond believing anything larger about the society around them. They buy into a strong, powerful China because it means security and wealth. They like the status this gives.

If the party and its leaders look like they are delivering on that promise, then all is fine. But if they falter (as has seemed to happen under Trump’s tariff assault), then all bets are off. The Chinese have become followers of the market and, unfortunately for the party, the market has infected not just economic life but also ideology, values and politics. Despite the party’s efforts to construct a Great Wall between the economy and the rest, the economy will always have a strong political dimension. Xi Jinping and the party are servants of this new China, and their frenetic activity and anxiety partly reflect this understanding.

The standard response from the party elite to an essay like Xu’s would be to consign it to the box marked “intellectual griping” or assemble the usual repressive machinery and close down the debate. But Xu’s prescription for the future includes many points that must have resonance. Particularly pointed are his observations about the need to restrain elite political power before it starts to eat into itself and repeat the mistakes of the past (with the difference that the costs of failure are now so much higher), and the need to change China’s diplomatic habits, which are proving wasteful and creating ambiguity rather than real friendships.

But there is a deeper problem. In his magnificent book, A Treatise on Efficacy: Between Western and Chinese Thinking, French philosopher and sinologist François Jullien talks of the fundamental difference between Western and Chinese thinking. The former tends to focus on action and intervention; the latter prioritises process and transformation, and strives to perceive deeper currents early on, deal with them, and achieve a positive outcome. The Communist Party, with its importation of Western Marxist thought, somehow married the foreign notion of intervention and action (to create a perfect socialist society through revolution) with a belief in slow, organic transformation. Mao, the great alchemist, tried to reconcile these two traditions in his 1937 essay, “On Contradiction”; it was a matter of living with the paradoxes until, one day, they worked themselves out.

Xu’s essay points out something important about this “great working out.” At some point, the attitude of the Communist Party, fuelled by its alien intellectual roots, could reach breaking point. Ideologically, it continues to pay lip service to a set of ideas (as Xu points out, the Politburo sets aside a day each April to study The Communist Manifesto), while the larger society tolerates its eccentricities because it delivers material results.

But Chinese society is moving into an era in which, as those material benefits become increasingly widespread, issues of meaning and value will come to the fore and demand something more than simple economic solutions. Xu has delivered a warning, and at least had the courage to present some solutions. Those who try to suppress his views can’t complain if and when a calamity comes. As Xu says in conclusion, “That’s all I’ve got to say now. We’ll see what Fate has in store; only Heaven can judge the nation’s fortunes.” ●

Kerry Brown is Professor of Chinese Studies and Director of the Lau China Institute at King’s College, London, and Associate Fellow at Chatham House on the Asia Pacific Programme. His new book, China’s Dreams: The Culture of the Communist Party of China and Its Secret Sources of Power, will be published by Polity Press in September.