Is the world big enough for both of them, ask Kerry Brown and Marya Shakil 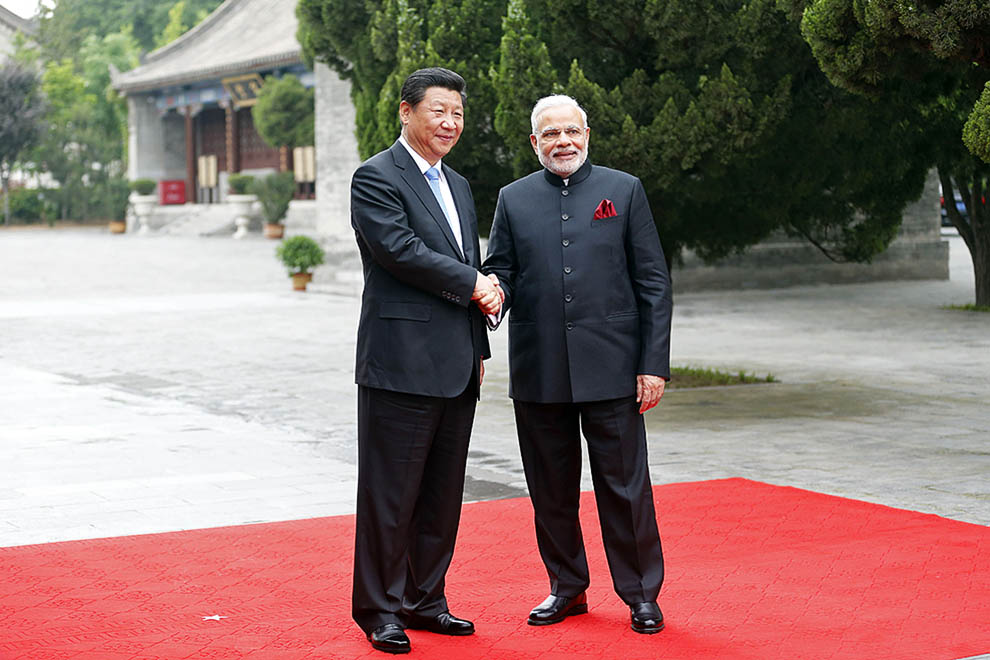 Twin ambitions: Chinese president Xi Jinping with Indian prime minister Narendra Modi during their visit to Daci’en Temple in Xi’an, China, in May last year. This was the first time Xi Jinping had hosted a foreign leader in his hometown of Xi’an. Sheng Jiapeng/CNSPHOTO/ChinaFotoPress via Getty Images

In September 2014 India’s Gujarat province received an unusual guest. For the first time an Indian prime minister was hosting a head of state outside the capital, New Delhi, and the guest concerned was Xi Jinping. Narendra Modi, chief minister of this province for over a decade before becoming prime minister, was showcasing his success story to his Chinese counterpart. As the day unfolded in full media glare, the decorated banks of the river Sabarmati witnessed the flowering of a camaraderie with historic import. The personal chemistry spoke volumes, and a year later Modi made the return journey to Beijing.

But Xi and Modi already had more in common than might have met the eye. In important ways they capture the ambitions of their two countries: they are both populist leaders, and they are both appealing to public sentiments of national rejuvenation and a desire for a central place in the global order. At issue is not the scope of their mutual ambitions, but whether Asia, or for that matter the world, is large enough for both of them.

Take Xi, for instance. Since being appointed general secretary of the Communist Party in November 2012 he has launched an extensive anti-corruption struggle that has threatened to turn into an all-out purge of any party, military or state-owned-business elites who might cramp his style. So far, it is not entirely clear whether he is an autocrat or the faithful servant of the party. But one thing is certain: his use of direct language, his speeches about a “China Dream” and his globetrotting (thirty-nine countries in two years) show plenty of ambition, whatever might be behind his actions. Modi has almost equalled this energetic record, with thirty-seven foreign trips across five continents during the same period.

Xi has proved adept at portraying himself, domestically, as being on the side of ordinary Chinese. This Chinese New Year he was shown, Maoist-style, working in the Chinese countryside among farmers. In 2014 he made a widely publicised visit to a simple dumpling shop in Beijing. He also, reportedly, took a taxi with some advisers soon after taking power. This attempt to reduce the vast distance between the public and the party leadership was initially refreshing, and so too was his willingness to speak more directly to ordinary citizens and the outside world. The problem is that a cult of personality is starting to emerge.

Modi is similarly bold and expansive. He too needs to ensure that the reforms he has promoted in the last year don’t get lost in domestic conflict and legislative standstill. The crucial goods and services tax legislation, touted as the biggest tax reform since India’s independence, has been blocked by opposition in parliament. The land acquisition and rehabilitation bill, important for achieving his “Make in India” dream, is also caught in domestic political conflicts.

In very different ways, Modi and Xi insist on remaining in control of one key area: the media. Through the early part of this year Xi has been demanding that state television, radio and news outlets stay loyal. For Modi, the tactic is different, even if the end – political control – is the same. As well as broadcasting a monthly radio program, Mann Ki Baat (Talk from the Heart), Modi is the master of social media: the platform, the medium and the message are his, not the opposition’s. With 18.1 million followers, he is the second-most-followed Twitter politician in the world after US president Barack Obama. This is a formidable weapon to turn against the opposition. His opponent, Congress Party leader Rahul Gandhi, took to Twitter much later; and by then Modi and his tweeting army had managed to dominate the discourse completely.

Modi’s aggressive use of social media bypasses the traditional media. India, the world, his ministerial colleagues and the government’s bureaucrats came to learn through Twitter rather than any official announcement that Obama was to be chief guest at the Republic Day celebrations in 2015. He has opened his government to public participation through contests for slogans, logos, taglines and other creative inputs. But in a country where the literacy rate is still a dismal 70 per cent, political communication like this only generates an illusion of democratic participation, and can easily appear self-serving.

Xi heads the party, military and, as president, the country. He has been appointed chair of a number of small but all-important committees whose policy input runs across almost every area of government. His cluster of close advisers creates the impression that the country is being run not by the Standing Committee of the Politburo but by Xi’s own cabal. Modi’s control over the Bharatiya Janata Party and the government is similarly complete. Most decisions are made directly by his office, on several notable occasions without keeping the relevant ministers in the loop. Like Xi, he is a compulsive workaholic. He is already being called an autocrat in India – someone who doesn’t trust the calibre of his ministers.

Are we seeing two parallel cases of political self-aggrandisement and nationalism rising before us? And, despite the reassuring sight of them making friends during 2014 and in 2015, can we be confident they will be able to coexist happily? For Xi, after all, the objective is clear and simple: regional economic dominance (China is already well on the way to that) followed quickly by political dominance. China wants to be the centre of Asia, restored to what its current leaders believe is its historically rightful place. Would Modi sign up for that vision? It’s hardly likely. For him, national regeneration and restoration of India to its rightful economical and political place is at the top of the agenda.

The world really needs to take more notice of the relationship between India and China. By the next decade, they will together be home to 2.7 billion people, almost two-fifths of humanity. And the emergence of a middle class in both countries will be central to global growth, as will their governments’ contribution to solving environmental problems.

Between them, Modi and Xi constitute an informal G2. If they get their relationship right, it will be an extraordinarily powerful combination. But history is not on their side. Will their hunger for success encourage them to break this mould and conduct the relationship in new ways, or will it make them even sharper rivals?

Kerry Brown is Professor of Chinese Studies and Director of the Lau China Institute at King’s College, London. Marya Shakil is Associate Political Editor with CNN-IBN in New Delhi and a Chevening Fellow.