Books | Is there a pattern to the presidency of Indonesia’s Joko Widodo? 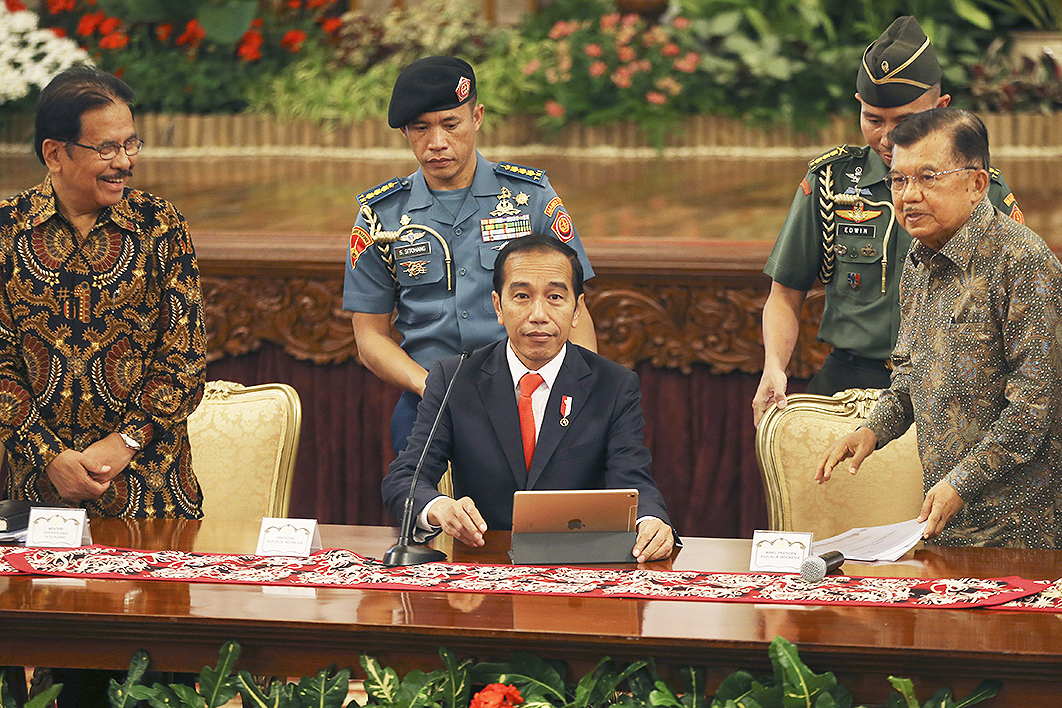 Man of Contradictions: Joko Widodo and the Struggle to Remake Indonesia
By Ben Bland | Penguin | $12.99 | 192 pages

When Indonesia was gripped by its largest wave of student protests for twenty-one years in late 2019, the historical echoes were strong. Protests like these had played an important part in toppling two presidents, Sukarno in 1965–66 and Suharto in 1998 — in the first case, helping to usher in decades of military rule; in the second, helping to dismantle it. Little wonder that the new round excited such attention.

This time, the students were opposing parliament’s attempts to gut Indonesia’s anti-corruption commission and government actions they believed would endanger civil liberties. They were also protesting against a president who, just a few short years earlier, had been lauded by many Indonesians — perhaps even by many of the protesters — as Indonesia’s democratic saviour.

Joko Widodo, or Jokowi as he is more commonly known, was elected in 2014 bearing high hopes for a renewal of Indonesia’s democratic life. Part of the reason he attracted such expectations — and a large part of the appeal he offered to ordinary Indonesians — lay in his background and biography.

Unlike most national politicians in Indonesia, Jokowi’s origins are relatively humble. He came to national prominence not as a result of dynastic connections, wealth or bureaucratic networks but because he had built on his significant personal success as a furniture trader to become the popularly elected mayor of Surakarta (widely known as Solo), a mid-sized city in Central Java. He also had an appealing simplicity of personal style that distinguished him from most public officials, and he revelled in opportunities to interact with ordinary citizens.

It was these characteristics that swept him from provincial Java to the governorship of Jakarta and, finally, the presidency in the space of two short years in 2012–14.

Indonesia’s pro-democracy activists, for their part, were attracted to Jokowi not so much for his personal qualities — though many liked him — but because they were repelled by his opponent. Prabowo Subianto was a hot-tempered former military man (and one-time son-in-law of President Suharto) who had been expelled from the military straight after the collapse of authoritarian rule because troops under his command had kidnapped a number of activists, several of whom never reappeared. In 2014, Prabowo was offering Indonesia the iron hand of “strong leadership.” His fiery speeches were the opposite of Jokowi’s charmingly lackadaisical public events.

If Jokowi’s candidacy offered the promise of democratic renewal, or even deepening, Prabowo’s threatened a return to strongman rule. Many Indonesia specialists — myself among them — were relieved when Jokowi prevailed in the bitterly fought presidential election campaign of 2014.

Fast-forward five years and the student protests of 2019 made it clear that hopes in Jokowi’s democratic potential had been dashed. Most Indonesia specialists now agree that Indonesia is undergoing democratic regression, though there is debate about how far and how fast it is travelling.

The country is obviously not returning to full-blown authoritarianism à la Suharto: elections are free, fair and fiercely fought; the media is largely unburdened by the rigid controls that constrained it during the Suharto years. Overall, Indonesia is still far more democratic than it was under Suharto. Yet Jokowi is leaning increasingly heavily on the military to get things done, and harassment of anti-government activists has increased.

Those student protests? They quickly faded, partly because of what Marcus Mietzner, one of the leading analysts of contemporary Indonesia, describes as “systematic intimidation efforts by state agencies.” And Prabowo Subianto? He ran again as Jokowi’s opponent in the 2019 election, adding a heavy dose of Islamism to his authoritarian-populist appeal, and lost again, only to be invited into government within the space of a few months by Jokowi and put in charge of the defence ministry. Rather than drawing a line between himself and Indonesia’s would-be strongman, Jokowi has given him one of the most powerful posts in the country.

One way of approaching this problem is suggested by the title of Ben Bland’s short and highly readable biography of Indonesia’s president: Man of Contradictions. According to Bland, Jokowi not only embodied Indonesia’s democratic hopes and then dashed them; he also combines all sorts of contradictory characteristics and features. He is an enthusiast for foreign investment, for example, but also strongly protectionist. He wants to rid Indonesia of corruption but believes harsh action can slow investment decisions. He was the ultimate political outsider but now runs the presidential palace like an “imperial court.” And so on.

There’s a long tradition of emphasising paradox and contradiction in analysing modern Indonesia. Writers frequently proclaim that Indonesia defies analysis, that the country is unique, or that analysts, as Bland puts it in his final chapter, “keep getting Indonesia wrong.” In the past, it was common to leaven such observations with clichés about the inscrutability of the Javanese, which, to its author’s credit, this book mostly avoids.

Instead, Bland, who was a Financial Times correspondent in Jakarta during the crucial years, draws not only on the latest academic analysis of Indonesia but also on a rich vein of his own reporting. He had the opportunity to observe Jokowi up close, and was able to interview him and many of the key players repeatedly, producing many gems of insight. (One such moment comes during an interview with Prabowo Subianto in which the former general and presidential candidate, explaining that he loves animals more than humans because the former never tell lies or engage in betrayal, offers a revealingly bleak insight into his own psychology.)

In fact, it’s doubtful that Indonesia is any more contradictory, or any harder to understand, than any large, complex country. (Who can claim truly to understand the United States these days?) The problem is more that outsiders rarely put much effort into trying to understand it, so its political system and dynamics remain largely mysterious even in a neighbouring country like Australia. In this regard, Bland is performing excellent service by introducing Indonesia to what, it’s to be hoped, is a new set of readers.

A more simple explanation of Jokowi and his evolution is suggested by Bland’s own analysis. Far from being a “man of contradictions,” the individual who emerges from this account is a remarkably straightforward character driven by a set of quite legible and overwhelmingly practical goals.

This man wants to improve the economy and raise living standards, and is willing to subordinate other purposes to that vision. He loves infrastructure. To the extent that he thinks about democracy — and the evidence Bland presents suggests that he generally doesn’t — he has a homespun vision that mainly involves leaders who are close to the people delivering what the people want, which is mostly improved living standards.

In a BBC interview earlier this year, a journalist asked Jokowi how often he thought about issues such as human rights, democracy and the environment. His response was that of a man of action: “If I work, I truly focus,” he said. “I don’t want to work on everything. This is a big country, so you need to focus, and prioritise, to focus above all. In my first term, I focused on infrastructure, in the second term we are focusing on human resource development. Maybe after that environment, innovation, and then human rights. Why not? I can’t work on everything, it’s not that I wouldn’t want to, but I like to focus my work, to work on priorities.”

Leaving aside the obvious objection (Indonesian presidents serve only two terms, so when exactly is he going to focus on these other issues?) the unreflective nature of the response is quite characteristic of a man who views governing as a technical exercise and, in Bland’s words, has “surprisingly little to say about the big questions of modern Indonesian history.”

As Bland explains, Jokowi’s outlook is quite comprehensible in the context of his background and life experiences as, first, a man of business and, later, a small-town mayor who fixed tangible problems of urban government. “What has struck me is how little he has changed from his days as mayor of Solo,” Bland writes. Jokowi is also a product, it might be added, of the education system of the late Suharto years — a system that discouraged critical thinking and tended to narrow rather than widen students’ perspectives on the world.

Thus, though Jokowi has “lurched back toward Indonesia’s authoritarian roots,” he has done so not because he has deeply authoritarian views (though Bland notes that he readily falls back on Suharto-era tropes about the incompatibility of political opposition with the cooperative nature of Indonesian culture) but because “he was reaching for any practical levers of power that might help him achieve his aims.” The parties that sit in Indonesia’s parliament and constitute Jokowi’s governing coalition are obstreperous and demanding; military officers offer a can-do approach that Jokowi finds appealing.

At one point, Bland refers to academic analyses that try to understand Indonesia’s political evolution as part of the wider global democratic recession, which most democracy specialists agree has been under way for more than a decade. Bland seems to dislike such efforts, because in Indonesia, as he puts it, “the direction of travel is overwhelmingly being driven by domestic factors.” This is obviously true, but much the same can be said of most countries where democracy is in decline.

In fact, the picture of Indonesian democracy — and of Indonesia’s leader — that emerges from Man of Contradictions is one that is rather typical of the current global moment. As Bland is at pains to point out, Indonesia’s democracy remains vibrant in some respects: elections in particular are competitive, even if the space for criticism has narrowed and authoritarian-era political players such as the military are moving back into the political game.

Such a mixture is not uncommon in the contemporary world; indeed, political scientists have coined numerous terms — electoral authoritarianism, hybrid regimes, illiberal democracy and the like — to try to come to grips with it. From Brazil to India, from the Philippines to Turkey, governing systems that combine electoral competition with illiberal political controls are increasingly the norm.

Jokowi the man is also a leader who seems made for this moment. He is not a fire-breathing populist like Rodrigo Duterte of the Philippines, nor an extravagant narcissist like Donald Trump of the United States. But he does share some of those leaders’ inclinations, including their attraction to the military, their elevation of nationalism over other ideological commitments, and their belief that political obstacles to economic goals can be pushed aside without too much concern over liberal niceties.

In fact, many of the world’s leading democracies are ruled by leaders who are less than fully committed to democracy’s principles. In this respect, Indonesia may not be a land of contradiction after all, but a place remarkably in tune with our current zeitgeist. •

Edward Aspinall is a Professor in the Department of Political and Social Change, Coral Bell School of Asia Pacific Affairs, Australian National University.