A hard landing for the ABC’s version of soft diplomacy 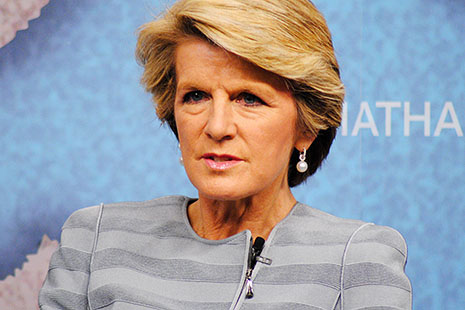 THE AUSTRALIA NETWORK, the ABC’s international television service, has been in the Coalition’s sights – and, not coincidentally, in the Murdoch press’s sights – since 2011. That was when the Gillard government awarded the ABC a ten-year contract to deliver international TV, bringing a definitive conclusion to a ludicrously mismanaged tender process.

So it came as no surprise when the Abbott government axed the network in Tuesday night’s budget. The decision came despite the fact that the ABC Act requires the national broadcaster to transmit news, current affairs, entertainment and cultural programs “to countries outside Australia” in order to “encourage awareness of Australia and an international understanding of Australian attitudes on world affairs” and “enable Australian citizens living or travelling outside Australia to obtain information about Australian affairs and Australian attitudes on world affairs.”

The government hasn’t proposed changes to the Act to remove this requirement; rather, it has removed the financial means for the ABC to fulfil this role in television. It would obviously have been more honest and proper to seek a change in the ABC legislation rather than attempting to bypass parliament by administrative fiat.

The budget decision is the culmination of a sorry sequence of events. In his last great gift to the Coalition as foreign minister, Kevin Rudd decided to open the tender process for the international broadcaster to commercial broadcasters. With a single exception, no other country that broadcasts internationally outsources its service to the private sector. The exception was Australia under the Howard government. In July 1996, within months of its election and without warning, the government announced the intended privatisation of Australia Television, as it was then called. The decision, made without any preparatory work by any section of the bureaucracy, came as a complete shock to ABC management.

When a decision was announced in July 1997, Kerry Stokes’s Seven Network was the successful tenderer. But three years later Seven stopped the service because it couldn’t make a profit. When foreign minister Alexander Downer called for a fresh round of tenders, the ABC was not among the applicants. To his credit, Downer approached the national broadcaster, and it was ultimately awarded the contract.

But the idea of outsourcing international broadcasting was not dead. In Kevin Rudd’s tender process, the ABC faced competition from Sky News, whose owners are the same Seven Network that bailed out in the late nineties, and Rupert Murdoch, who in 1994 had removed the BBC’s news from his pay TV offering in China in order to please the Beijing regime.

Rudd’s assessment team preferred the Sky tender. Cabinet asked it to reconsider, and again it opted for Sky. (Its grounds for doing so have been kept secret under commercial-in-confidence provisions.) The Gillard cabinet intervened, handing carriage of the tender to communications minister Senator Stephen Conroy; then, seeking to lock in the national broadcaster’s position, it added a provision under which only the ABC or its associated companies could provide government-funded international services. As a result, amending legislation will be needed to allow Sky or any other commercial broadcaster to participate in a new tender process.

Sky News, which has become a valuable part of the Australian news mix, had every reason to feel aggrieved by Labor’s follies, and received a payment from the government as compensation.

The grounds on which Rudd’s committee decided in favour of Sky should now be made public. We might discover, for example, that some provisions were loaded against the ABC. It may be that one condition was for the tenderer to provide extra funds from elsewhere, but if the ABC diverted funding from elsewhere in its budget it would contravene its governing legislation. Similarly, the ABC would be wary of arrangements with other broadcasters that might compromise its editorial independence. We don’t know if such considerations were a factor, and that leaves a hole at the centre of this important episode.

But the botched process was clearly a turning point in Coalition attitudes. According to prime minister Abbott, “We’ve had for a long time very serious issues about the Australia Network tender process. Twice the tender process gave that particular operation to someone other than the ABC, and then, because of leadership problems inside the government, the decision was changed. And the Audit Office itself has said that the whole thing was badly done.”

IT ISN’T clear that the Australia Network could have done anything to redeem itself in the eyes of the new government. In 2014, the ABC won the most extensive access afforded to any Western broadcaster in China, with the Australia Network to be made available to the entire Chinese population. But even such an unprecedented achievement counted for nought.

As a selection of her recent comments shows, foreign minister Julie Bishop has been the most frequent critic of the broadcaster. “It is meant to be a tool of public diplomacy and I am concerned by the level of negative feedback I receive from overseas,” she said in one interview. “Given some of the recent incidents – for example, the Snowden allegations, and now these allegations about the navy’s treatment of asylum seekers – is the ABC fulfilling its contractual agreement?” It’s not a question of the ABC promoting its news programs in the region, she insists, “it’s actually meant to be fulfilling the Australian government’s foreign policy objectives.”

Her first line of criticism has been what she perceives as a lack of quality. When I see such criticisms I am reminded of Woody Allen’s quip that he first went to Hollywood in reply to an ad saying, “Wanted: boy, part-time, to direct Ben Hur.” The mismatch between impossibly high ideals and pathetically limited resources is not uncommon in the public sector. The Australia Network broadcasts every hour of the day, every week of the year. By my reckoning its contract of $20 million works out at around $2300 an hour, a pittance in TV broadcasting terms. It only survives because of synergies with the wider ABC, to which it pays a fee of $6 million to air its programming. In turn, it has three correspondents based in Asia whose work is available to domestic ABC news.

If perceptions of quality are notoriously subjective, then it is equally difficult to get objective measures of value for money. Even reliable ratings figures for international broadcasters in the Asia-Pacific are hard to find. According to a 2010 Lowy Institute report, internal ABC figures put the network’s total reach at over thirty-two million viewers. “After nine years of relatively stable funding levels, Australia Network has managed to achieve a penetration in the region (particularly in the Pacific) which positions it as a genuine challenger to its international counterparts,” the authors observed. The audience figure also needs to be assessed against a background of overseas students contributing more than $14 billion to the Australian economy last year, with tourism another big earner.

Bishop’s second line of criticism is that she wants the news coverage to conform more closely to the government’s policies. In 1980, in the Dix Inquiry into the ABC, departmental spokesman Kim Jones first articulated Foreign Affairs’s view that whatever temporary embarrassments may be caused by the ABC’s international broadcaster Radio Australia, maintaining its independence is the key to its credibility, and hence to its effectiveness. This has remained the department’s official view, even if individuals have sometimes been tempted to be less liberal. Terms such as public diplomacy and soft power have entered the international relations lexicon, but if the ABC’s international broadcasters are to play a fruitful role then editorial independence will be the indispensable precondition.

In 1989, following an inquiry into Radio Australia (of which I was a member), the ABC board affirmed that “Radio Australia should, through its own performance, show a nation which allows an open flow of information, which nurtures broad debate on policy and holds its government accountable through close and critical examination of its actions.” According to the board, “News and informational features should project a national broadcaster capable not only of independence from government, but also with standards of accuracy which bear constant examination.”

DISCUSSIONS about Australia’s national interest are often conducted in overly narrow terms. As a middle-level power, Australia’s scope for international influence is affected by its capacity to use transnational channels to project itself. Within the dynamic Asia-Pacific region, many of Australia’s comparative advantages lie in our high educational standards, the richness of our cultural life, our expertise in media and journalism, and the cosmopolitan and democratic nature of our society.

International broadcasting is a relatively cheap means of projecting these features and values. It may sometimes benefit Australia directly, by increasing trade in educational services, for example, but more often it will be indirectly, by making potential trade partners and customers more receptive to examining Australian options. Presumably, it also helps to give Australian values more resonance internationally.

It follows that serving the national interest in this way must not be compromised by any shortsighted pursuit of particular diplomatic or commercial goals. The credibility of an international broadcaster is hard-earned, but easily squandered. •