A long ride to a narrow victory?

The polls suggest that a big win is out of Malcolm Turnbull’s reach, writes Norman Abjorensen. So what happens if he scrapes back into office? 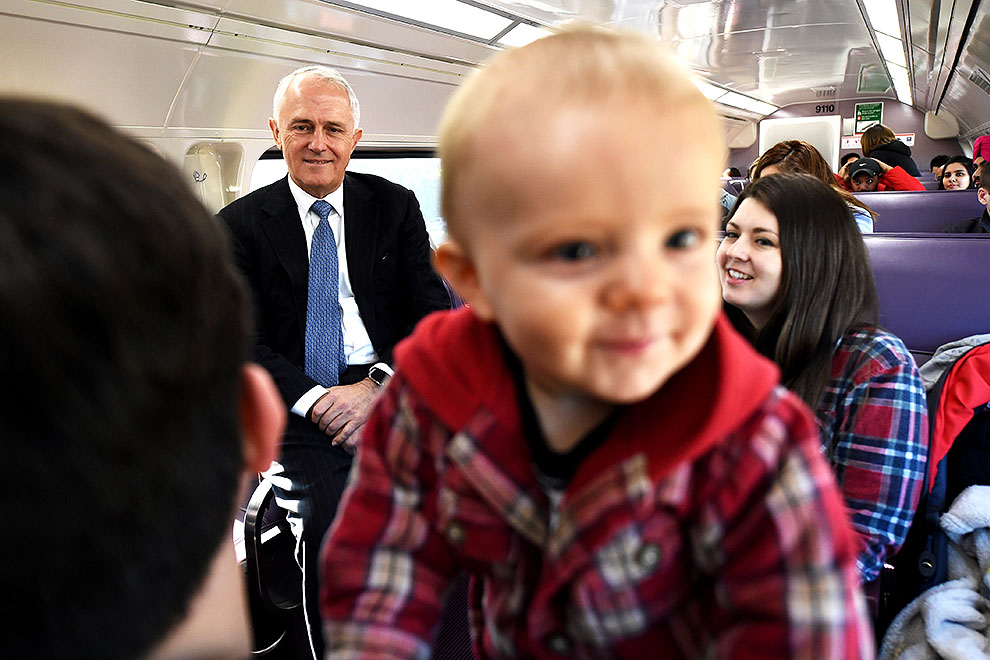 On the line: prime minister Malcolm Turnbull talks to commuters, including seven-month-old Clark Johnson and his mother Angel, on a train trip from Sydney’s CBD to Emu Plains in the western suburban seat of Lyndsay, on Monday this week. Tracey Nearmy/AAP Image

A Coalition government re-elected on 2 July – which, unless the polls shift, is by no means assured – will depend very largely for its composition and policy direction on the size of its majority. A clearcut win for Malcolm Turnbull would strengthen his hand in putting his own stamp on the government – something he has been unable to do since he toppled Tony Abbott just over eight months ago. A narrow victory would create a series of headaches.

Turnbull has been saddled with an electoral mandate dating back to 2013 and a largely Abbott-selected ministry, and has retained policy settings all but indistinguishable from those of his predecessor. To break the Abbott shackles, he will need to keep seat losses to a minimum; otherwise, he will struggle to shore up his legitimacy within the Liberal Party and reshape the government more to his liking.

Events since he took over last year have not gone according to the script. The supposedly most popular politician in the land, who was expected to steer the Coalition ship away from the dangerous reefs where Tony Abbott had taken it, has struggled to reorient the government. The very real danger now for Turnbull is that a narrow win will enable the Abbott supporters, of whom there are many, to accuse him of squandering the 2013 mandate.

A win by a mere handful of seats, which now looks the best Turnbull can hope for, will do nothing to consolidate his hold on the job, and the party’s conservative wing will be encouraged to seek to regain the leadership. In these circumstances, we can expect another turbulent three years.

Malcolm Turnbull had little room to manoeuvre after he took over as prime minister. Clearly, Tony Abbott could not be retained in the ministry, and nor could his chief henchmen, Eric Abetz and Kevin Andrews – and that was no loss. Yet the circumstances didn’t allow him to make wholesale changes. To placate Queensland, for instance, where his stocks were not high, he was forced to retain the plodding Peter Dutton (and even defend Mal Brough to an absurd degree).

A narrow win might well entail having to accommodate both Abbott and Abetz. While this would be an understandable and pragmatic move, it would hobble him considerably.

The Senate contains another set of problems. On current indications, it is difficult to see how the Coalition could make inroads there; indeed, the Labor Party and the Greens have a chance of coming close to a majority.

This is not just a legislative constraint on a re-elected Turnbull government, but also an existential issue. Without being able to appeal to the Liberal Party’s conservative base as Abbott did, the PM has sought to shore up his position with the business community, where he is much more at home and on familiar ground.

To do this, he must deliver on a crucial promise to this constituency and restore the building industry watchdog, the ABCC. Because it was the trigger for the double dissolution, he would be obliged to take the ABCC bill to a joint sitting of both houses of parliament. If the election result goes down to the wire then the combination of a slender majority in the House of Representatives and no majority at all in the Senate might well leave him short of the numbers to pass the bill.

Apart from losing the election, this would be the worst possible outcome for Malcolm Turnbull. With the conservative base generally loathing him, he would also be seen by the business community as unable to deliver the goods. His position, though not untenable, would be far from secure, and certainly uncomfortable.

With the backbench offering little talent for him to promote, a returned Turnbull government might well look very much like the present administration: Scott Morrison at Treasury, Julie Bishop at Foreign Affairs, Marise Payne at Defence and Mathias Cormann at Finance. If Tony Abbott were to return – and this might well be a price the prime minister pays for peace in the short term – then Health, where Abbott has served before, might be an option. (But the most recent example of a defeated prime minister returning to cabinet – Kevin Rudd after the 2010 election – might still be fresh enough for Turnbull to resist any such comeback.)

Peter Dutton, under the circumstances, will probably be safe, although he would be unlikely to stay at Immigration. Peter Hendy, should he retain Eden-Monaro, is a likely (and worthy) candidate for ministerial promotion, although his key role in helping Malcolm Turnbull wrest the leadership from Abbott has made him persona non grata with the conservatives, and they might well exercise a veto of sorts.

One thing that just might strengthen Turnbull’s hand after a narrow election win is that a large number of marginal seats that would go in a swing of 4 per cent are held by those generally regarded as conservatives: Russell Matheson (Macarthur), Michael Sukkar (Deakin), Brett Whiteley (Braddon), Luke Howarth (Petrie), Natasha Griggs (Solomon) and Karen McNamara (Dobell). Whether this will reduce the power of the conservatives within the parliamentary party remains unclear.

In terms of policy, a narrow win for Turnbull is likely to see little change – and the current budgetary situation offers little scope for fresh initiatives.

It is not just Malcolm Turnbull’s fate on the line at this election; so too are political precedents. Should Labor win – and that is by no means entirely out of the question – it will mean the first one-term government ejected since the Great Depression and the first time a first-term opposition leader makes it to the Lodge. •

Norman Abjorensen’s most recent book is The Manner of Their Going: Prime Ministerial Exits from Lyne to Abbott (Australian Scholarly Publishing).