A party too divided to rule 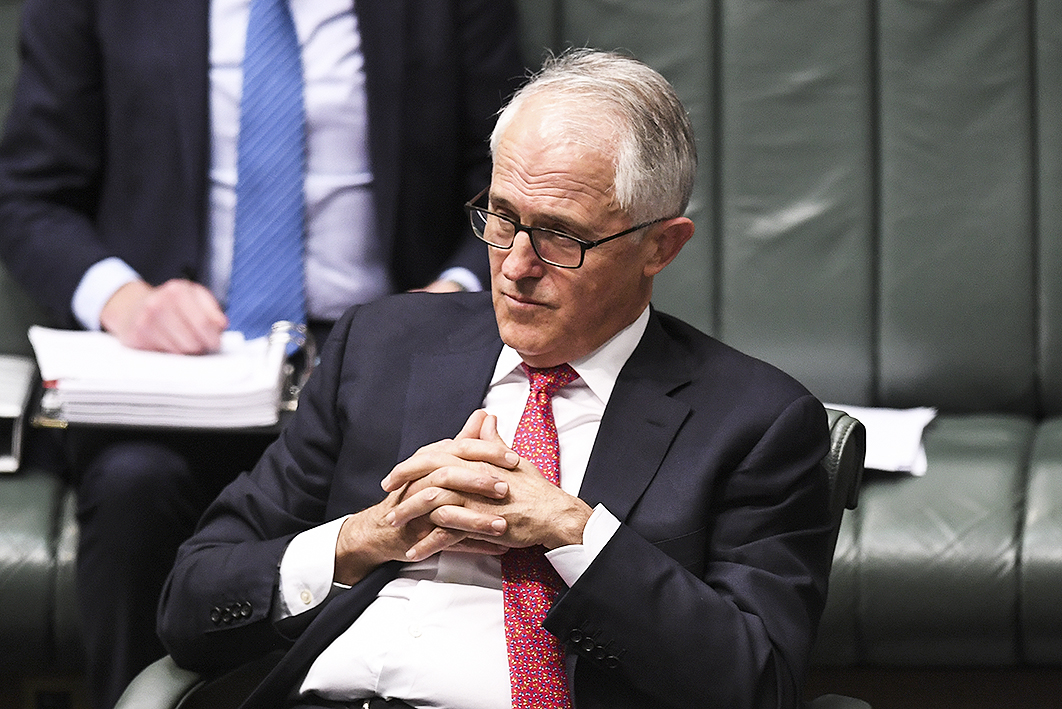 The Liberal Party is in crisis. The risk is that whoever emerges as its leader — and maybe that will be neither Malcolm Turnbull nor Peter Dutton — could take over a party and a government too divided to lead Australia anywhere.

In politics, disunity is death. Labor is already an odds-on bet to be in government within months. A disunited Coalition could be facing a long period in opposition.

That is now its normal place in Australian politics. In the thirty-five years since Bob Hawke led Labor to victory in 1983, Labor has governed most of the time, at national level and in all six states. The Howard era was the outstanding exception; but John Howard has been the only Liberal leader since 1983, federal or state, to win more than two terms.

But why did this happen? How did a Coalition that dominated Australian government for most of our history become so divided that it cannot agree on a policy to tackle climate change — an issue that is not even a partisan matter in most Western countries?

All parties of any size are coalitions of people with differing views. The larger the party, the wider the range of views. There’s nothing unusual about that; Robert Menzies too had his dissidents. There will always be some on the left of the party and some on the right; that’s natural. It’s a question of how their differences are handled.

In the Liberals’ golden era of the fifties and sixties, leaders were in a strong position to shape the terms of consensus on issues. The party rooms were full of men who had served in the war and were used to respecting authority. Politics was less intense, and leaders had more time to spend with ministers and backbenchers, define the consensus, and make it stick.

The Liberals and the Country Party of the time were parties of the centre right. Menzies was not averse to compromise. When he retired as prime minister, the journalist Alan Reid wrote that to call Menzies a conservative was to stretch the meaning of the word to the limit. “On his record, probably the most accurate description of him within the framework of domestic politics is that he is a cautious reformer,” Reid wrote.

John McEwen, the dominant Country Party leader in that era, achieved one of the greatest transformations of Australian policy when he persuaded his party and the Liberals to set aside their strong anti-Japanese feelings in 1957 to approve a trade agreement with Japan. Labor, which claims to be the internationalist party, opposed the deal, but McEwen — in the end, backed by Menzies — had the courage to take on his own side of politics and make them see that realities had changed, and they had to let go of their old antagonisms and move on. Labor eventually followed.

Thirty years later, another conservative was the first political leader to take seriously the risks of climate change. Margaret Thatcher was a cultural warrior of the first order. But she was also a former researcher in chemistry, the first British prime minister with a science degree. As PM, she was instrumental in setting up the intergovernmental panel on climate change — although later, in a retirement that sadly ended in senility, she changed sides to line up with her fellow cultural warriors.

But the example she set in office stuck. Britain under its conservative government today is phasing out coal and has become a global leader in renewable energy. Germany under chancellor Angela Merkel, another conservative, is now generating almost 40 per cent of its power from renewables.

France under its last conservative leader Nicolas Sarkozy had similar ambitions. The United States, of course, is on a totally different path, but it is alone in that.

So why is Australian conservatism so different? It’s hard to disagree when Norman Abjorensen argues that part of the problem is that contemporary conservatism has no “cohesive set of beliefs or values,” and can unite only in opposition to others’ policies.

Tony Abbott is a prime example: as a student politician in the seventies, his crusade was against feminism. As opposition leader, he crusaded against an emissions trading scheme (and much else). And now, as a Liberal backbencher, his crusade is against the man who overthrew him as prime minister, Malcolm Turnbull.

When rising temperatures forced climate change onto the political agenda, the reaction of most Australian conservatives — and crucially, John Howard — was to treat it as pure politics. Global warming was a core issue for their political opponents: that in itself was reason to reject it. Taking action would hurt the interests of Coalition donors in mining and related industries; that too was reason to reject it.

What science told us was irrelevant. Geologists like Bob Carter and Ian Plimer were paraded by conservatives as if they were experts on atmospheric physics and chemistry. A culture of denialism took root, dignified as “scepticism” — which it wasn’t, as sceptics are open to evidence, and the denialists weren’t. The evidence of global warming is now overwhelming. But how many of those Howard-era “sceptics” have accepted that evidence?

Howard himself did in his last year or so in office, persuaded by his department head, Peter Shergold, and his ebullient young environment minister, Malcolm Turnbull. He and his cabinet committed Australia to an emissions trading scheme. (Alas, in retirement, Howard, like Thatcher, has slid back into the camp of the cultural warriors and denialists.)

The Coalition’s commitment to act against climate change was shallow, and grew weaker as Kevin Rudd cynically used the issue to try to divide the opposition rather than seek national unity on “the greatest moral challenge of our time.” Rudd never condescended to negotiate with the Greens, and negotiated with the Coalition only when it became clear that he needed its numbers to get the bill through the Senate. It was too late. The Liberal party room dumped Turnbull as leader, and Abbott became his successor, pledging to block emissions trading or anything like it.

On the eve of that party-room vote, I wrote in the Age:

Make no mistake. The division that has opened up in the Coalition on climate change could cripple it for a decade. This is the worst threat to Coalition unity in our lifetime… Whoever leads the Liberals, there is only one way this dispute could end. One day, all of them will have to agree that global warming is a problem that governments cannot ignore, and support emissions trading or a carbon tax to fight it.

I got two things wrong. Like most people, I expected Joe Hockey to emerge from the party room as the new leader. And I assumed that the Coalition would have a showdown long before now to end its denialism and forge a genuine climate change policy. That has been postponed, so that the decade in which disunity on climate change will cripple it has only just begun.

It’s easy to blame Turnbull for this. But many others share the blame — above all, three successive leaders of the Nationals, who have insisted that Turnbull take little or no action. The main victims of climate change in Australia, as we are seeing, are the farmers. For decades they have been the Nationals’ core constituency. But in the past decade, their political leaders have betrayed them to cosy up to the big money of the mining industry.

Lest we forget: when Malcolm Turnbull was elected Liberal leader in 2015, the Nationals’ leader, the otherwise sensible Warren Truss, demanded that he foreswear real action against climate change as the price of maintaining the Coalition. Turnbull, too eager to smooth the waters after his victory, promptly agreed. Possibly he felt he could renegotiate the deal from a stronger position after the 2016 election. Or possibly, he just wanted to be prime minister, and didn’t care what it took.

The ostrich faction of the Liberals is also to blame. The hotter the climate gets, the more of them seem to retreat into denialism. In most of Australia, the Liberals’ shrinking party branches increasingly comprise a narrow base of cultural protesters rather than the broad base of mainstream Australians they had when national development was the issue.

Whoever leads the Liberals into the next election will confront the same dilemma as Turnbull. Australia is the second-biggest emitter per capita of greenhouse gases in the G20, behind only Saudi Arabia. In Paris, Abbott pledged to reduce Australia’s total emissions in 2030 to at least 26 per cent below 2005 levels. We cannot walk away from that.

Turnbull could have handled it much better. In hindsight, he must regret allowing the Nationals to tie his hands as the price of becoming PM. Nothing has damaged his credibility with voters more than his endless retreat from the commitments on climate change that once defined him in our eyes. He has survived this test of party-room support, but he will need a lot of luck or inspiration to get out of this escape room.

Turnbull was the Liberals’ big opportunity. He won them the 2016 election, and no other leader was more likely to steer the party back to the centre-right position it occupied in Menzies’s time. That is impossible now.

Both the Liberals and the Nationals need a new John McEwen, willing to sit down with his own MPs and senators and, by persuasion or banging heads, get them to see that realities have changed, and they need to let go their old antagonisms, and move on.

That could be a decade away. Until then, the Liberals and Nationals appear headed for another spell in opposition, and it could be a long one. •

Tim Colebatch is a regular contributor to Inside Story, a former economics editor and columnist for the Age, and the biographer of former Victorian premier Sir Rupert (Dick) Hamer, the last Liberal premier to win more than two elections.