A political solution to a populist problem?

Four months after the national election, Sweden finally has a prime minister again

Sweden has only recently come to experience the far-right populist insurgency that has dominated political debate across Europe in recent years. The rise of the far-right Sweden Democrats party is testing the electoral system and challenging the country’s longstanding commitment to democratic values, civil public debate, multiculturalism and the liberal world order.

The sharp rise in support for the Sweden Democrats in last September’s election pushed the seven mainstream parties into a complicated months-long stalemate. The far-right party won enough seats to stop both the left bloc (the Social Democrats, the Left Party and the Greens) and the Alliance (the Christian Democrats, the Centre Party, the Liberals and the Moderates) from commanding a parliamentary majority on their own.

Last week, Social Democrat leader Stefan Löfven responded in kind, reviving an old collaboration with the Centre Party (formerly the Farmers’ Party) in what could be seen as a form of left populism. After drawn-out negotiations between the seven party leaders, and several special national party conferences, Löfven finally moved and won a confidence motion in parliament. He is now appointing ministers and preparing to assemble a legislative program.

The Sweden Democrats first cleared the 4 per cent hurdle for parliamentary representation in 2010, securing 5.7 per cent of the national vote and twenty of the 349 seats. The other parties immediately resolved to quarantine the newcomer: none of its parliamentarians was appointed to any committees, and mainstream politicians refused to appear on TV panels with its leaders. The Alliance government, led by the Moderate Party’s Fredrik Reinfeldt, governed on a knife edge: had the 156 members of the left bloc agreed to accept the support of the twenty Sweden Democrats they might have moved a successful no-confidence motion. But the Social Democrats upheld the quarantine and allowed the Alliance to govern.

The 2014 election result severely tested the quarantine strategy. On the one hand, the Sweden Democrats’ vote more than doubled; on the other, the Alliance was outpolled by the left bloc. The Alliance might have continued governing had it been prepared to treat the Sweden Democrats like any other party and negotiate its support. But two of the Alliance parties, the Liberals and the Centrists, remained adamantly committed to quarantining the far right. Their small and diminishing voter base also made them most reluctant to risk going back to the polls, which was what Löfven was threatening to do as caretaker prime minister.

Just before Christmas 2014, Löfven finally persuaded the Alliance parties to accept a left-bloc government in return for what amounted to caretaker policies on the environment, taxation, defence and welfare. But not all Alliance members were happy. Many Moderates and Christian Democrats thought the far right should now be counted as a de facto part of the right bloc; after all, far-right voters were represented in parliament and entitled to have their views heard. Pressure built, and by the end of the parliamentary term the Christian Democrats had renounced the December 2014 agreement and the Moderates had begun to flirt with far-right policies on crime and immigration.

When Sweden voted again last September, support for the Sweden Democrats increased greatly, to 17.5 per cent of the vote and sixty-two seats, rivalling the figures recorded by the largest of the old parties of the right, the Moderates. The Sweden Democrats were now the third-largest party in parliament, and it was even more difficult for the Moderates and Christian Democrats to exclude them.

With just one less seat than the left bloc, and expecting at least implicit support from the Sweden Democrats, the new Moderates leader Ulf Kristersson insisted that he was entitled to form government. But the Sweden Democrats wouldn’t play along, and announced they would only support a budget that cut immigration and the refugee intake. Within the Alliance, meanwhile, the Liberals and Centrists insisted on upholding their election pledge to continue to block far-right influence over policies and budgets.

This brings the story up to December, when the Moderates and Christian Democrats managed to pass a budget proposition that relied on Sweden Democrat votes and Liberal and Centrist abstentions. With this “blue–brown” constellation further undermining the Alliance, Stefan Löfven managed to persuade both the Centrists and the Liberals to abandon their other pre-election pledge to maintain their coalition with the Moderates and Christian Democrats. In return, Löfven and his Social Democrats made significant concessions, promising to explore legislation to reduce workers’ rights and introduce market rents for newly built public housing. The first of these pledges particularly antagonised the unions, and both pledges provoked opposition from the Left Party, which is expected to do all it can to delay the reforms.

Löfven also quietly went along with an insistence that the Left Party would have no influence over policy. In her public pronouncements, Centre Party leader Annie Lööf attempted to soften her party’s decision to leave the Alliance by insisting that the Left, as former communists, were anti-democratic and should be treated like the Sweden Democrats. This argument undoubtedly played well with her party colleagues, who at a recent national conference agreed to endorse the new agreement with the Social Democrats and Greens.

For his part, Left leader Jonas Sjöstedt has publicly assured Löfven that his party absolutely wants to see a Social Democrat rather than a Moderate as prime minister. The Left can live with exercising no influence over budget negotiations, he said, but it will insist on influencing other legislation and would vote against both liberalised employment rights and market rents for new public housing. If the far right agrees with that opposition, which might well be the case, then the Left’s twenty-eight votes in parliament would be enough to sink the reforms.

Has Stefan Löfven created a kind of left populism in Sweden? It’s true that January’s agreement with the Centre Party rests on policies wholly unlike the left populism of Syriza in Greece, Podemos in Spain and similar constellations of socialist and communist supporters in other European countries. But it does have something in common with farmer–worker populism in the United States in the 1930s (personified by Senator Huey Long, along with performers Woody Guthrie and Pete Seeger) and in Sweden itself, when the Social Democrats and the Farmers’ Party “cow dealt” (horsetraded) during 1933–40 and 1949–60.

In 1930s Sweden, the Social Democrats agreed to impose tariffs on agricultural imports that would increase the price of food for the workers but protect jobs in rural areas, while the Farmers agreed to extensive social insurance–financed unemployment benefits. The deal extinguished spot fires among farmers and workers with Nazi sympathies, and laid the foundations for a great expansion of the welfare state after the second world war.

Naturally, the common ground between this month’s agreement and those earlier deals doesn’t lie in the substance of the policies. Increased global trade, much larger public sectors, and several generations of widespread education mean that today’s context is vastly different from that of the 1930s or even the 1950s. The common ground lies in what the political theorist Ernesto Laclau calls the logic of populism, in which a political grouping puts itself (or him- or herself) forward as a representative of “the people” who fights “enemies” of the people.

“The people” not only includes plebs, hooligans, sans-culottes, geckoes, deplorables, working families and any number of mobilising names for “ordinary” people, but also ropes in a range of other groups (the forgotten middle class, students, small entrepreneurs, retirees and so forth) believed to be railing against unsatisfied demands. The “enemies” can include monopolies, corporations, banks, finance capital, capitalism more generally, the United Nations, international Jewry, corrupt officials, mainstream politicians, established parties and, more generally, liberal elites, political correctness, and the political class, or “the establishment,” in the media, universities, think tanks and the public service.

Whether left or right, or an incoherent mix of both, the logic of populism involves constructing a “people” from a series of partial claims, within which the claims of a core group prevail over the others. This is why a common enemy or common threat is so important: it papers over differences within “the people.” (Of course, the logic of populism — the process of constructing a whole from a series of differing parts — arguably applies to any form of democratic politics.)

One important difference between the contemporary Social Democrats and their earlier counterparts is that in the 1930s they made great use of a conservative label for the welfare state — a folkhem, or “home of the people.” This term reverberated powerfully throughout the country, and continues to constitute a force for integration and equality among citizens.

Resistance to the tide of far-right populism might be useful common ground for the latest worker–farmer alliance, but it is a negative argument against a common enemy. If the new agreement is to withstand intense scrutiny and offer anything like a solution to a Rubik’s cube of contrary interests and diverse perspectives, then the Social Democrats will also need a positive argument.

Linking the manufacturing sector more closely to the ideals of a green economy is one possible candidate. Reconstructing the Swedish “people” as something like “smart environmentalists” would obviously test the patience and rhetorical skills of Stefan Löfven or any future Social Democrat leader, but its benefits could endure in the same way that the early welfare-state policies of the 1930s did. In the meantime, the January agreement seems set to last until the next election in 2022. •

Andrew Vandenberg is Senior Lecturer in Politics and Policy Studies at Deakin University.

Looking forward to constitutional reform by looking back at Uluru 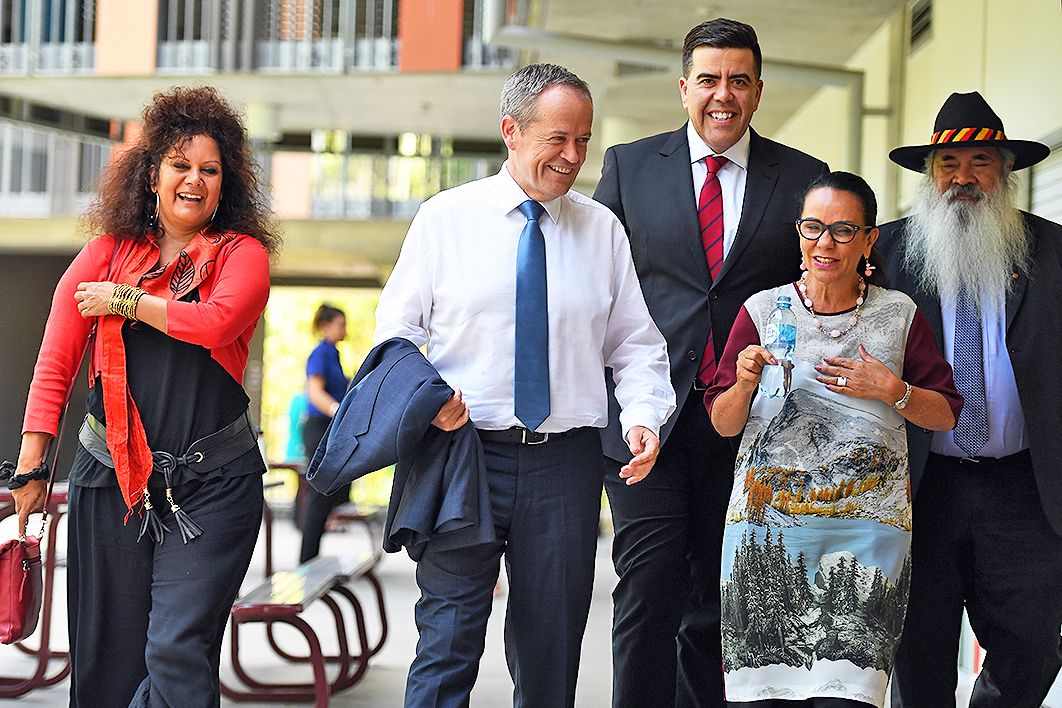