A very British summer on your ABC

ABC TV has returned to normal programming, but the dominance of Britain lingers on 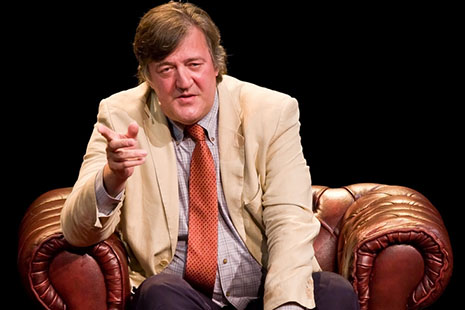 Has any Australian figure ever been so indulged by the ABC? England’s Stephen Fry (above).
Photo: Haags Uitburo/ Flickr

In a recently released policy statement the ABC’s managing director, Mark Scott, and his head of television, Kim Dalton, declared that the corporation would prioritise the “funding, presentation and programming of Australian programs.” Given the dominance of British programs on the network, the commitment was welcome news. If ABC1 is the corporation’s flagship then it frequently sails with the Union Jack at the top of its mast. Indeed, ABC television vies with the monarchy in perpetuating the colonial relationship with the old imperial heartland.

The dominance of British – and mainly BBC – productions was particularly pronounced over Christmas and the New Year period and overwhelmingly so during the three-hour peak viewing time between the end of 7.30 and the late news at 10.30. Over those six weeks Australian programs were on the screen only a little over 10 per cent of the available time. On twenty-nine of the forty-two nights in question there were no locally made programs at all. None! At one point, seven nights in a row passed without anything Australian on the screens during those hours. There was a second period of five nights without anything local to watch. Over the six weeks only twelve Australian-made programs were shown during peak time, several of them repeats. During four weeks in January, seventy-eight British programs were screened and only nine locally made ones.

By any measure this was an extraordinary situation – a complete failure to present Australia to the national audience during a holiday period when presumably people had more leisure time to watch television. It also raises the larger question of whether the ABC makes enough product to be able to represent and interpret Australia to the world.

It is interesting to speculate about how a visitor over the holiday period would have fared if she had sought to learn something of this country by watching the national broadcaster during the peak viewing period. Many evenings would have passed without her hearing an Australian accent. She would have concluded that the quintessential Englishman Stephen Fry was a pivotal figure in local cultural life: he headed up a weekly panel program, his travel adventures were screened on four nights and on one Saturday evening he was allowed to hog the screens for ninety minutes while being interviewed before an audience at the Sydney Opera House. Has any Australian public figure ever been so indulged by the ABC? Our hypothetical tourist would have left Australia with the impression that she had visited a county rather than a country.

The lack of Australian programs might be accentuated during the holiday period but it is symptomatic of a larger, more general problem. Regular ABC viewers learn more about British than Australian history, archaeology and heritage, landscape and wildlife, architecture, planning and design. Perhaps more importantly, we see more British than Australian programs that might be characterised as contemporary sociology – programs that deal with consumer issues, social relations, schools, hospitals and other institutions. And then there are the travel programs, often dominated by ageing British chaps who see the world through British eyes.

The galling aspect of all this is that many such programs could be made in Australia by Australians. They are not the highly expensive costume dramas that the ABC cannot realistically afford to make. The frustration of ABC staff must be acute as they see program after program brought in from Britain, the like of which could be made here, and which they know many Australians hunger for. The country’s large and able community of documentary film-makers must surely feel, with much justice, a sense of betrayal.

Does all this matter to the management or the board, I wonder? Are they ever embarrassed by the Union Jack on the mast head? Do they ever feel uncomfortable when night after night ABC screens are dominated by British programs? The ABC never bothers to indicate, as SBS routinely does, the provenance of its programs. It is as though it doesn’t think it matters – that British and Australian programs are easily interchangeable, that what is of interest or concern over there will evoke the same response and be equally relevant here, half a world away.

The comparison with SBS is instructive in other ways as well. Both networks show many non-Australian programs. But the difference is that SBS is cosmopolitan and as a result reflects contemporary multicultural Australia by screening programs from all over the world. The ABC, meanwhile, refers back to the long-lost British Australia of the age of Empire. This must surely be the explanation for the continuing dominance of British programs. But there is a further, more humiliating symptom of the colonial subservience. It is not as if the ABC and the BBC had an equal, reciprocal relationship. Almost all the cultural traffic is in one direction, following the old imperial lines of communication and authority. Does the BBC often take ABC programs I wonder? It is certainly unthinkable that any British television channel would show little but Australian programs, as a matter of course, night after night.

Clearly the ABC has not outgrown its origins, dating from 1932 and the Indian summer of Empire. It was at birth a “thoroughly imperial artefact,” in the words of the corporation’s historian, Ken Inglis. For many years Australian accents were shunned on air and imperial benefactors paid for ABC staff to train at the BBC in pursuit of a conscious policy of strengthening ties and perpetuating Dominion subservience. Over the years many senior positions were taken by expatriates from the BBC.

It is easier to understand the present situation of the ABC if we consider the development of many of Australia’s cultural institutions, which moved from deference to independence over the course of the twentieth century. The orchestras, the universities, the galleries, theatre companies and the courts all freed themselves from the imperial embrace. ABC radio followed a similar trajectory, and in the process created a network which, on any measure, outshines the BBC. Will ABC television continue to be the last of our great cultural institutions to fully reflect contemporary Australia at a time when Britain becomes of less importance to us politically, economically and diplomatically with every year that passes?

Will it change? Probably not any time soon. The ready access to affordable British programs slows adaption and limits innovation. Government could speed up the process in two ways. More money is obviously essential. But it would be useful to apply a new system of quotas. We are familiar with ones that mandate Australian content. Perhaps the ABC should be forced to accept an upper limit on the number of British programs that can be shown. By that means we might during future holiday periods be able to watch Australian-made programs. It would be a welcome and refreshing change. •

Henry Reynolds’s latest book, A History of Tasmania, was published in October by Cambridge University Press.

From the archive The premier, the crime boss and the ABC Margaret Simons 2 September 2021 Renewed allegations of corruption in 1980s New South Wales have reawakened strong feelings
Close