A virus in search of a host

Martin Wolf offers the best explanation of how the financial crisis came about and what it means for the future, writes Michael Gill 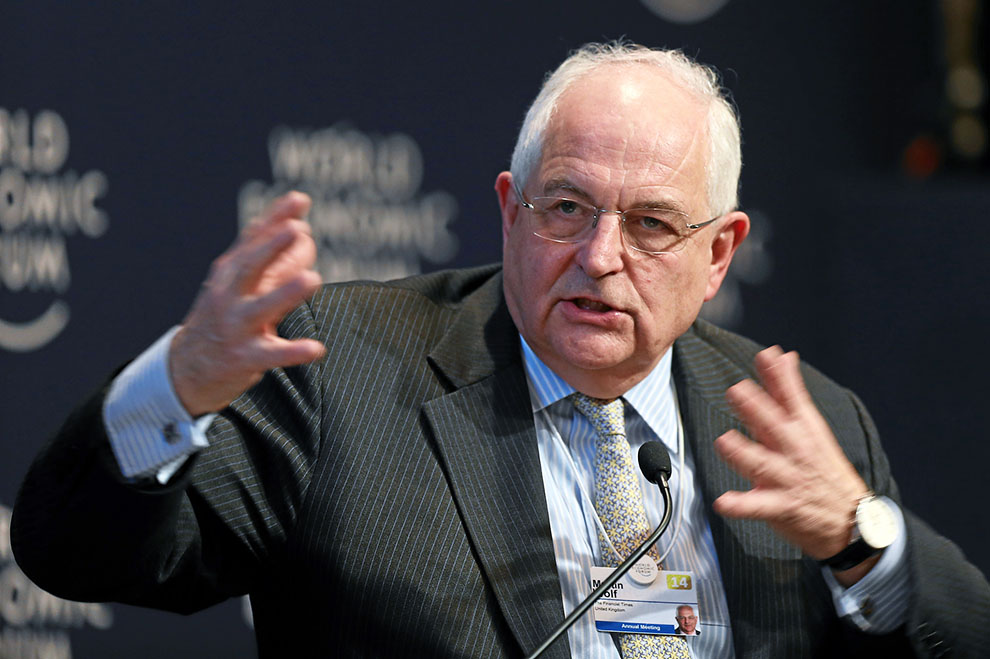 The Shifts and the Shocks: What We’ve Learned and Have Still to Learn from the Financial Crisis
By Martin Wolf | Allen Lane | $49.99

Singer-songwriter Pharrell Williams might have nailed the idiom of our era in his hit single “Happy.”

It’s a simple matter to reel off the remarkable features of Australia’s good life. The often irascible Institute of Public Affairs has even gone to the trouble of compiling evidence of how well our lives are lived. Too good to be true!

Wages and employment have been robust – so much so that Australia tops the Economist’s league table of wage gains since 2002. House prices have climbed to remarkable levels, a strong dollar has made imports cheap and our public finances are the envy of the world – so much so that Australian governments have developed a Magic Pudding offer for every poll: a turkey in every pot.

For more than two decades we have enjoyed strong economic growth, low inflation and rising prosperity. It has been a double boom in a country where booms are a cultural heritage. We have seen turmoil in the world’s finances of such force that it bears an acronym more tired than KFC, yet Australians have breezed on.

Lately, however, the nagging doubts that afflict those of a cautious mind have gathered momentum. The surrender of large parts of traditional manufacturing after a long attrition might well have been brought on by strong foreign exchange rates and domestic wages, but it woke a few people up. A slide in confidence is finally raising doubts about Australian economic exceptionalism.

Doubts about the efficacy of Australia’s housing market and the sustainability of related household debt are longstanding. Most commentary tends to the view that debt is concentrated in wealthy households and is therefore manageable. But while it is clear that household savings jumped sharply when the financial crisis hit, average household debt remains at about 150 per cent of average incomes – a level roughly double what it was at the turn of this century.

Lately, the worries have been sharpened by lower commodity prices and doubts about China’s ability or willingness to sustain the stimulus from which Australia has drawn comfort. And the rose-coloured glasses have gone missing.

On 14 October, RBA assistant governor Guy Debelle gave a speech on volatility in financial markets in which he noted that there wasn’t much. We should expect that to change, he said, possibly violently:

If I had told you that there were heightened tensions in the Middle East and Eastern Europe, uncertainty about the turning point in US monetary policy, a succession of strong US job numbers, uncertainty about the future direction of policy in Europe and Japan, as well as increased concern about the strength of the Chinese economy, you would not be expecting that to make for a benign time in financial markets. But that is what we have seen for much of this year.

Debelle went on to describe some of the conditions apparent in the markets, and their evident inertia in the face of what are otherwise volatile influences. He noted that markets had built-in rules and mandates that tended to bust any instinct to go against the flood when the dam of confidence breaks. “So there is a fair chance that volatility will feed on itself,” he said. “One should always be careful of looking for too much rationality in trying to understand market dynamics. Given the lack of rational arguments for the current state of affairs, trying to rationally explain how it will unwind is also going to be difficult.”

As if to underline the point, world markets immediately went into a funk, though it’s fair to say that Australian markets remain comfortably ensconced in their extended happy hour.

Debelle’s remarks highlight the unstable character of global economies revealed since 2007. They highlight the fundamental volatility, opacity and excess leverage of global financial markets. And they add immediacy to any doubts one might have about the efficacy of the systems that supposedly manage economic welfare and stability.

All of which makes this an ideal time to question where we are and what’s what, six years after the financial crisis set in. Many books have been written about the hows and the whys: racy Wall Street yarns about Federal Reserve governors, Wall Street honchos and American presidents wrangling in panelled rooms; finger-pointing morality tales; and some useful accounts of people who tried to head off trouble but were drowned out. But until recently I had not read a book that gave me a full understanding of what went wrong.

Martin Wolf’s The Shifts and the Shocks does that job with erudition and lucidity. The Financial Times’s highly regarded economics commentator elevates our view of this financial trauma, asking purposeful questions about what we all have been thinking. He makes it clear that it’s mostly the thinking that is a problem.

There’s no easy way to summarise Wolf’s nuanced argument, which starts and finishes with issues of imbalance. At the heart of things is an unresolved excess of savings, the result of rich nations growing too slowly to absorb their wealth and poorer nations growing without great resort to others’ capital. Because governments have been brainwashed into paring back their own role as investor, we have had a long period in which capital was very cheap and its effects were transmitted globally. End result: increasingly large volumes of one-way traffic in capital markets. A virus of debt in search of a host.

Despite ample evidence that this was a big problem, the regulators of global finance became increasingly complacent. This may have had something to do with the gigantic profits and salaries that flowed from rising leverage. Or it may have been the naivety of people like Federal Reserve governor Alan Greenspan, whose unwavering belief in the self-correcting discipline of capital markets evidently overrode otherwise plain signs of trouble. The party was out of control, but Greenspan kept filling the punchbowl.

President Bill Clinton’s decision to repeal key “affiliation” sections of the Glass–Steagall Act was in many ways a watershed. Glass–Steagall, a product of the Great Depression, was simple and effective. Its principal impact was to prevent commercial banks having affiliations with security-trading firms. And while that limitation had been watered down over the years by regulators’ interpretations, Clinton’s declaration that Glass–Steagall was “dead” came, sadly, at a time when a hearty application of its intent would have had huge practical value.

Wolf’s contribution to this plain formula (cheap money plus indiscipline = mayhem) is largely about ideology. He explains that economists, regulators and legislators have been corralled into thinking of the economy without thinking about finance. They ignore ample evidence of the natural tendency of finance markets toward excess and volatility. (Hence Greenspan’s infamous apologia to a US Congressional committee in 2008: “Those of us who have looked to the self-interest of lending institutions to protect shareholders’ equity, myself included, are in a state of shocked disbelief.”) So here we are.

Wolf isn’t alone in arguing that we need to be more realistic and less ideological in handling the issues of economics (no small order!), but he also makes it plain that the conditions that created the crisis persist.

What’s to be done? Wolf spends a lot of time on possible improvements in the regulation and management of financial markets. Australians might like to read those thoughts with the Murray inquiry into the financial system in mind, and especially the debate over capital adequacy. One of Wolf’s central concerns is that the role of creating money has moved from governments to commercial banks, and it’s certainly the case that Australian banks are not limited in their financing by domestic factors. I had the impression that Wolf would like to see the deposit-takers wound back through measures that might look like Australia’s old liquidity controls, applied by the central bank through adjustable statutory reserves and liquidity measures. This would be radical, but it would certainly bring us back from a situation in which any bank failure would automatically trigger a public finance crisis.

Wolf makes good points about public finance, which is at the heart of the savings glut. He thinks governments need to engage directly in managing excess savings so that the financial-market beast can’t gorge to excess. But that would require a very big shift in thinking because most of the relevant countries are committed to limiting public expenditure, regardless of the state of the economy. On which note, we should keep an eye on the global infrastructure initiative that is bouncing around in G20 talks.

I came away thinking about the futility of our domestic debate’s narrow focus on government finances. Wolf might as well have specified the fragility of Australia’s position, with a considerable private debt weight, household debt reflecting high property prices and a banking system with a heavy reliance on international savings. He didn’t, but his observations had immediate resonance for an Australian reader.

Essentially, we have a global financial system that promotes trade in assets and has developed the means to create money at will. It’s true that most wealthy or emerging countries are ageing, throwing off excess savings that exacerbate the financial system’s inherent flaws. Governments could do more, though, by directing excess savings to dealing with global infrastructure deficiencies or similar purposes, which would balance away the savings glut and avoid the risks of massive and unpredictable volatility. But that would require fundamentally different thinking.

The financial crisis struck without apparent warning, its epicentre in what is supposedly the most sophisticated financial centre in the world. The shock was such that people in New York who actually work in capital markets were parcelling their savings from bank to bank to obtain the protection of government deposit insurance. To put it mildly, this is not at all what’s supposed to happen. Greenspan admits “disbelief” and Guy Debelle has confirmed that opacity, irrationality and absence of certainty about large risks remain characteristic of financial markets today. Martin Wolf offers practical and relatively simple propositions for change. But he left me wondering whether it will need another depression before we get back to reality.

As Dorothy would say, we are a long way from Kansas. •