His leadership again under threat, the prime minister is locked in a potentially terminal embrace with his party’s right, writes Peter Brent 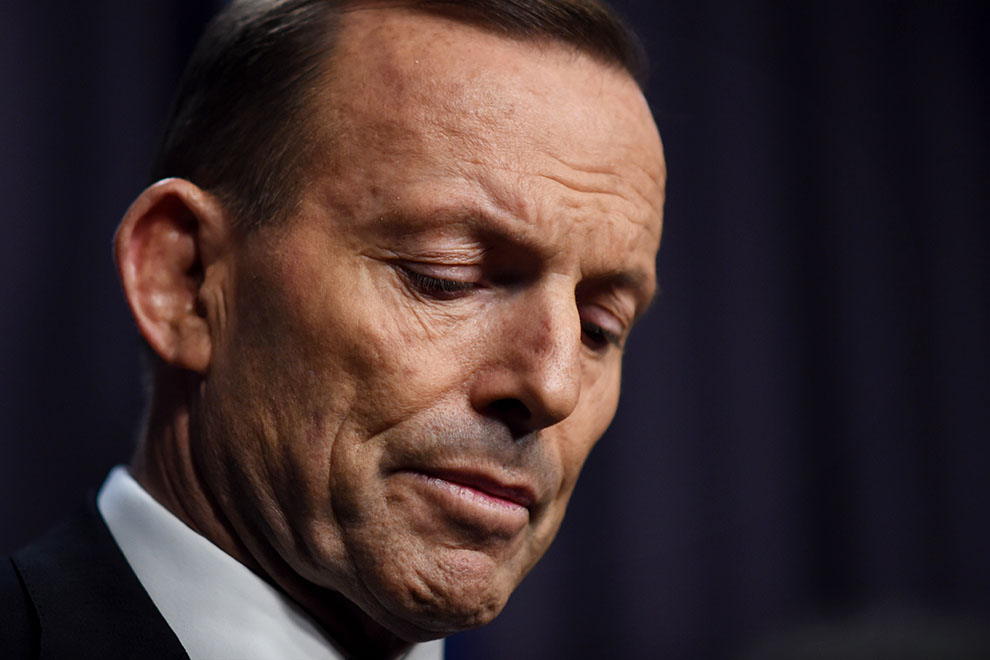 There aren’t many votes – either way – in same-sex marriage. A negligible number of people would change their after-preferences support for a major party solely on this issue. Yes, the fact that we lag behind comparable countries is getting embarrassing; it makes the Coalition appear stuck in the last century. But John Howard showed that being a fuddy-duddy didn’t have to be politically terminal.

Still, when the postmortems on Tony Abbott’s prime ministership are delivered, this week’s manoeuvre – the joint party-room vote, the sudden idea of a referendum next term – will figure prominently. And if this parliament runs its full length, those postmortems will likely be written before the next election. Yet it was Abbott’s insecure hold on his position that drove him towards this backflip.

Before continuing, please allow a pedantic terminological indulgence. Despite the almost uniform reporting, “referendum” and “plebiscite” mean the same thing. Using the first to describe a vote to change the constitution, and the second for other matters, is a wholly Australian, and quite recent, invention, possibly evolving out of the 1977 national anthem vote.

So, for example, the 1916 and 1917 non-constitutional conscription votes were mainly referred to as referendums at the time. Ireland’s May referendum was constitutional, while Greece’s in June was not, but “referendums” they both were – or “plebiscites,” if you prefer. (And, yes, the plural of referendum is referendums.)

Abbott’s announcement that there will be a referendum on same-sex marriage next term contradicts his reaction to the Irish result three months ago. Because a referendum represents the opponents’ best chance of shunting this change off to the never-never, I interpreted his words in May as a tacit acknowledgement of the inevitability of recognising same-sex marriage and an indication of a willingness to preside over that eventuality, most probably through a Coalition conscience vote. Perhaps he also understood how divisive and ugly a referendum could become.

What has changed is the prime minister’s hold on power. In May, after a relatively successful budget, political life appeared quite rosy. This week his unpopularity, and the reasons for it, are as evident as they have ever been, and talk has returned to his mortality.

Back in Julia Gillard’s bleakest months in the job, the fact that the detested (by caucus) Kevin Rudd was her only feasible replacement actually prolonged her tenure. (Rudd had indicated that he would wreck the joint if the party tore her down and put someone other than him up.)

A variation on a watered-down version of that dynamic plays out today. If Abbott only had Malcolm Turnbull to contend with, life would be easier. The right wing of the party room, and many others, can’t stand Turnbull. Each of his public flutters of the eyelid might increase his popularity in the community but it drives support in the party room downwards. And only one of these groups decides the Liberal leadership.

But other people want Abbott’s job – people like Julie Bishop and, just outside the field of vision, Scott Morrison, who outflanks the prime minister on the right. And the right is where Abbott’s remaining support is.

Morrison has stated he is against recognising same-sex marriage. Bishop is undeclared. Both, importantly, argued at Tuesday’s joint party-room meeting that the matter should be settled by plebiscite/referendum. This being the dream outcome of the opponents of change, Abbott presumably felt he had no choice but to jump on board.

So, as government plans stand, the forty-fifth parliament will see two referendums (the other to recognise Indigenous Australians in the constitution) – but not, according to the prime minister on Wednesday, at the same time. Each will conservatively cost the taxpayer over $100 million, dwarfing the $22 million price tag for the 2014 WA half-Senate election (and we all remember the fuss made about that).

A referendum held with the next general election would be much more efficient and cost-effective, but this is a political deck-clearing exercise. With the Coalition majority so at odds with community sentiment on the issue, they want it discussed as little as possible during the campaign.

And a referendum with an election would stand a greater chance of success because, not to put too fine a point on it, the less discussion there is about same-sex marriage in the lead-up the closer the circumstances will resemble the environment in which opinion polls show huge support.

A standalone referendum, on the other hand, would create the space for cascading, tub-thumping horror stories. Around two-thirds of Australians are in favour of recognising same-sex marriage, but most referendum topics in this country start off popular and end up failing. Usually it’s because the question is vague and distant and seen as gratuitous. Neither the republic in 1999 nor banning communism in 1951 fitted that description, yet even they too conformed to the pattern. (Scientific polling did not exist for the 1916–17 conscription referendums.)

A wise person once said that Australians, more than most, get apprehensive at the prospect of change but then adapt to it with relative ease. A constitutional referendum on same-sex marriage would be easier to defeat than a non-binding one, because concerns could be generated about tampering with the delicate balance in our founding document. In 1999 purported “direct electionists” urged Australians to vote “no” to the republican model on offer and hold out for a better one; they then declared the issue settled and off the agenda once the ballots were counted. An easy “no” argument on a gay-marriage constitutional referendum could riff off that example: urging people to reject constitutional change as a step too far, holding out the promise of a non-constitutional referendum instead, but never actually delivering it.

But what if a (non-constitutional) referendum on same-sex marriage succeeds? Can we be sure it would result in legislative change? Will all its fierce parliamentary opponents vote against what their gods and consciences tell them? After all, Abbott stated this week that the current term is the last in which MPs will be bound by a party vote. Or will they abstain?

Abbott’s leadership is in a classic tailspin. As with Gillard towards the end, maintaining a grip on the position leads him to placate unrepresentative sections of his party, which further estranges him from the mainstream electorate and sizeable chunks of party MPs.

Unless Abbott springs a double dissolution this year. That’s his best chance of survival. Then he can cross that referendum bridge when he arrives at it. •