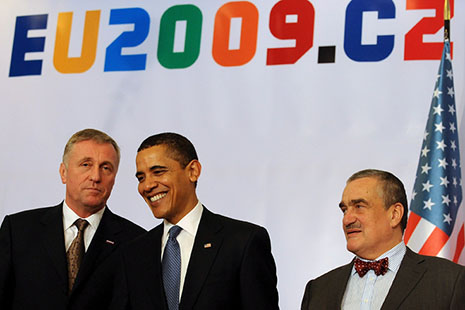 ALTHOUGH BARACK OBAMA has moved quickly to point US national security policy in a new direction, change will not be as radical as his more lofty rhetoric has suggested or his more ardent followers hope. Despite significant differences between them, it’s likely there will be more continuity between the Bush and Obama administrations than is commonly imagined.

This is partly because US security policy is entrenched within a presumption that Washington’s strategic primacy is essentially benign and must be perpetuated. This idea has deep roots in the nation’s history, political culture and psychology. Moreover, it’s a presumption that Obama has neither the inclination nor the political room to shake America free from.

Sure, the concept of “soft power,” which mostly means diplomacy, will be emphasized over “hard power.” Less grating language will be used to smooth over the menacing tones attached to Bush’s idea of military dominance. But the notion that America should remain top dog will continue to mark the Obama presidency.

This strategic primacy rests on four pillars: nuclear deterrence; conventional military superiority; a capacity for armed intervention in troublesome countries; and (implicit in those three) a readiness to use force. How does Obama approach these four pillars? The packaging has certainly been altered, but in some areas the substance of policy is being more adjusted than transformed.

Regarding the first pillar, nuclear deterrence, Obama sounds sharply different from his predecessor. The new president has abandoned Bush’s sometimes asinine refusal to engage with the arms control agenda. Obama considers much of the neoconservative opposition to this agenda to be ideological ranting, damaging to both US interests and the global common good. His repair work will include an effort to charm, inspire and cajole Congress into ratifying the nuclear test ban. He also wants a treaty to verifiably end the production of weapons-grade fissile material, and he is working with Russia to reduce nuclear forces. He has also hinted Washington will abandon its option for nuclear first-use. Finally, the president says he’s aiming for the abolition of nuclear weapons, a declaration intended to ensure next year’s summit of the Non-Proliferation Treaty starts off on the right foot.

These are all positive measures which should provide badly needed ballast and direction to global non-proliferation efforts. But before we get too carried away, a few points should be made. First, Obama is not the first US president to proclaim the abolition of nuclear weapons as a goal. Second, in his recent Prague speech Obama claimed too much in saying he is starting the task of reducing America’s nuclear arsenal; this task was begun many years ago, with presidents Bush senior, Clinton and Bush junior each making large cuts to America’s bloated Cold War nuclear forces. Third, between today’s grim reality and a possible nuclear-free tomorrow are many obstacles (such as getting a non-platitudinous United Nations consensus about how to handle North Korea) as well as pressing distractions (for example, the global financial crisis). Fourth, Obama has understandably insisted that Washington retain a strong nuclear deterrent for the foreseeable future. It’s unsurprising he says abolition might have to wait until after his lifetime.

The second pillar of US strategic primacy is conventional military superiority. This means ensuring the balance of power is heavily weighted towards Washington – or, more accurately, ensuring there is an overwhelming imbalance in America’s favour. Here Obama will mostly let the Pentagon keep following its familiar track. Some outrageously expensive weapons will be cut as Obama tries to bring the Defense Department’s budget under control. Aspects of the strategic guidance given to Pentagon planners will be revised. But don’t expect to see US defence spending dipping below twice the combined totals for Russia and China. Contrary to some messages coming out of Washington, most of this sum has nothing to do with combating terrorists. The military tools for fighting al Qaeda and similarly minded groups cost only a fraction of the US$650 billion-plus in annual defence spending Obama has asked from Congress (which is, by the way, US$100bn more than the Pentagon spent three years ago).

Nevertheless, Washington’s capacity to fight in “non-traditional” operations, such as combating terrorists and insurgents, has obviously become a key focus of military planning; it must now be counted as the third pillar of strategic primacy. Here Obama has made serious attempts to differentiate himself from Bush. He has announced troop withdrawals from Iraq. He’s marked-out the moral high ground by ordering the eventual closure of Guantánamo Bay prison and ending torture-as-policy. He is emphasising support for civilian state-building in Afghanistan. Most importantly, compared to Bush, Obama seems far more capable of winning the war of ideas with al Qaeda. He has a better story to tell, and a better way of telling it. Much of the world hopes Obama’s deft handling of the contest over competing narratives to be enough to swing the struggle decisively away from Islamist fanatics.

But Obama doesn’t enter this contest with a clean sheet of paper; it has Bush’s smudge marks all over it. And much more pain is to come – over sixty US soldiers and numerous civilians have been killed in Iraq and Afghanistan since Obama took office. There will probably still be many American troops in Iraq at the end of next year; more troops are going into Afghanistan; and Obama has signalled a willingness to continue, and perhaps escalate, the bombing of parts of Pakistan.

Much of this activity is about hunting down terrorists and helping democracy take root in unlikely terrain. This can be viewed as an honorable effort to do the right thing for bloodied nations in desperate need of help. But there’s an additional aspect to the story, which brings us to the fourth pillar mentioned above: a readiness to use force (against rogue states, rebels, pirates and so on) as a signifier of primacy. Counter-insurgency is now partly about preventing a collapse of American credibility. An unsettling implication here is that over the coming years American soldiers will be killing and dying in Afghanistan partly because before them other American soldiers have killed and died. Put another way, it will be about searching for ways to vindicate earlier sacrifice and demonstrate that Washington is still in the business of being a superpower.

Today, counter-insurgency represents the pointy end of US strategy. Strip away the euphemistic jargon and this type of operation calls for Americans to use violence to restructure sometimes recalcitrant societies in far-away lands. This can be dirty and frustrating work. It’s easy to imagine circumstances emerging which suck in more US soldiers, or tempt officers on the ground to escalate the destructiveness of their operations. There is no guarantee Obama will be able to control the dark and messy side of these conflicts; he knows they have the potential to go off-script and drain the life out of his administration. The matter is complicated by the fact that in Iraq and Afghanistan the commander-in-chief finds himself at different points along a counter-insurgency spectrum. In Iraq there seems to be a tendency towards letting local events take their course; in Afghanistan, the United States looks more like it is trying to take control of events. But is either approach sustainable? All we know for sure is that the challenges promise to require awkward decisions over the next few years about how to manage the nexus between military power and foreign policy.

To sum up: Obama’s project to re-shape American national security policy is a welcome change in direction but isn’t as radical as some people think; furthermore, he is working within considerable constraints. For example, he can signal an eventual shift away from nuclear deterrence, but he can’t complete the move himself; if this move is ever made, it will be made by a future president. In addition, Obama does not, and shouldn’t be expected to, show any sign of surrendering US conventional military superiority. Finally, Obama is working in a world being shaped partly by intrastate conflicts, some of which seem to require the wielding of US military force.

Given all of this, it will be difficult for the president to meet the enormous hopes that have been invested in him as the symbol of a new, better and less militarised global order. Although Obama appears more able than most to handle the challenge, he has to balance the ideals of his supporters with the putative requirements of US strategic primacy. His task is complicated by the fact that upholding primacy over the coming years will have implications for the use of force which are still unfolding and certainly can’t yet be fully defined. •