After Paris: where now for carbon pricing?

Carbon trading might have been given just a small part in the Paris agreement, writes Rebecca Pearse, but it was already time to move on 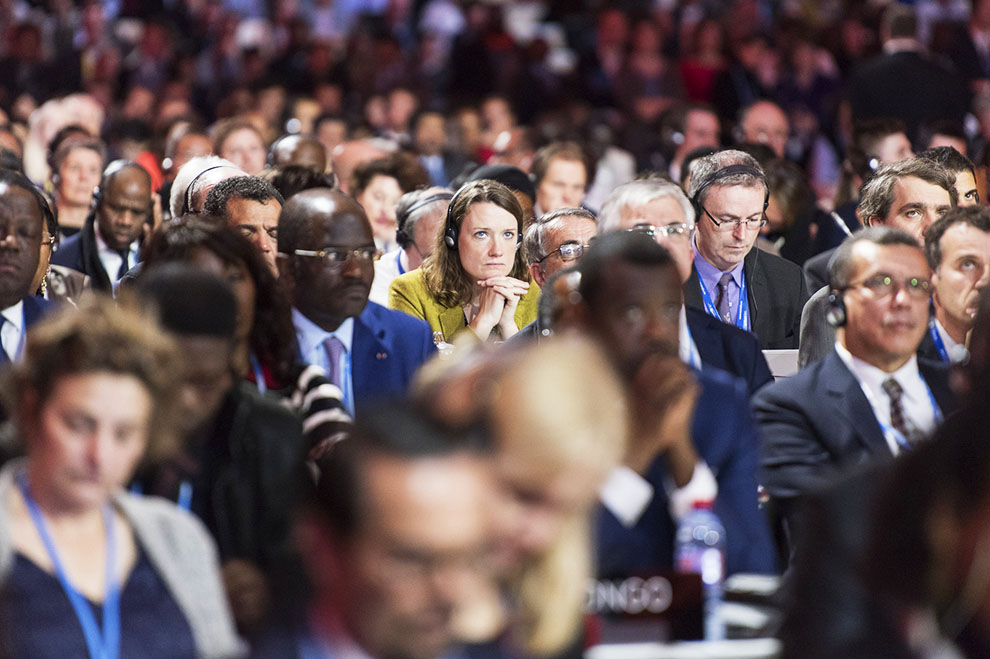 The Paris Agreement includes no explicit reference to carbon trading, offsets, or other forms of carbon pricing. Mark Garten/UN Photo

Since the 1990s, carbon pricing has been a political tool in efforts to bring nations together in a multilateral climate deal. Diplomats, economists and environmental campaigners have looked to pricing mechanisms – in the form of emissions trading and offsetting – as a means of brokering agreement between governments, with business, and in domestic parliaments.

The argument for carbon trading and other market mechanisms is that they are more efficient than simply requiring companies to use specific low-carbon technologies, or imposing legislative bans on high-carbon activities. Economists argue that market mechanisms provide “least cost” emissions reductions that won’t compromise economic growth.

In practice, though, they don’t match the picture of markets in economics textbooks. During twenty years of experimentation, carbon markets have been troubled by regulatory failures and flawed by a mistaken equivalence between different parts of the carbon cycle – between fossil fuel emissions and land-based emissions, for instance. Nor have carbon prices created anything more than marginal changes in the cost structure of production. In the context of complex governance failures in energy markets, including Australia’s National Electricity Market, they are relatively weak instruments.

Carbon trading is particularly weak when we consider the historical relationship between fossil fuels (the largest source of greenhouse gases) and global markets. The International Energy Agency, Oxford University researchers, and Carbon Tracker have all demonstrated that billions of dollars in fossil fuel assets and infrastructure will have to be written off if we are to stay within the 1.5–2°C range. We need much stronger government action to ensure a just transition to alternate energy sources.

The Paris Agreement aims to kept global temperature “well below” a 2°C increase on pre-industrial levels, and to “pursue efforts” towards 1.5°C. While the strengthened temperature goal is something to celebrate, the question of exactly how the world will stay within a 1.5°C limit is up in the air. Pre-conference country reports to the United Nations add up to more like 3–4°C warming, and although national pledges will be reviewed every five years there is no requirement for nations to follow through with tighter controls.

The agreement includes no explicit reference to carbon trading, offsets, or other forms of carbon pricing. But in its euphemistic language it does sketch out a new voluntary mechanism for carbon trading. Article 6 outlines a mechanism designed to “contribute to the mitigation of greenhouse gas emissions and support sustainable development” and obliquely describes carbon credit trading as “ly transferred mitigation outcomes.” The new mechanism will be a voluntary instrument, with different combinations of nations able to choose to create linked carbon-trading and offset schemes.

This is much more ambiguous phrasing than in previous UN agreements. The 1997 Kyoto Protocol, for instance, explicitly set out three “flexible mechanisms” in its text: emissions trading, the Clean Development Mechanism, and Joint Implementation (two offset schemes). The UN offset programs were one outcome of that agreement, as were the regional EU emissions trading scheme and the numerous other trading schemes across the world. The Paris Agreement will supersede the Kyoto Protocol in 2020, and existing UN offset programs will be folded into the mysterious new mechanism.

The agreement also notes that carbon trading should not be the only game in town. Article 6 refers to the importance of “integrated, holistic and balanced non-market approaches” to national efforts. A parallel debate has arisen on the question of a separate new mechanism for land carbon offsets, which was not agreed to in Paris. Although the Coalition for Rainforest Nations has been arguing in favour of a new forest offset scheme, Tuvalu and Brazil have opposed it. But land carbon offsets, like Australia’s “carbon farming” projects, may be included in the new market mechanism created by the Paris Agreement.

Article 4 of the agreement aims to “achieve a balance between anthropogenic emissions by sources and removals by sinks of greenhouse gases in the second half of this century.” This language opens up the possibility of forest offsets, as well as geoengineering techniques like carbon capture and storage or ocean fertilisation. Using land carbon offsets to create “carbon sinks” will not compensate for continued exploitation of fossil fuels, however, and conservation projects and unproven technologies like biochar could have unforeseen effects.

These worries aside, it is important to recognise that carbon trading is not the politically attractive option it used to be. Numerous countries and regions, including the European Union, Brazil and New Zealand, argued for carbon trading to be including in the Paris Agreement. They had support from big oil and coal, the World Bank, and the International Monetary Fund. But resistance from elsewhere has weakened the appetite for carbon trading ly.

A significant part of the reason why carbon trading is marginal in the Paris Agreement is the strident opposition from Venezuela and Bolivia to any mention of market mechanisms in the post-Kyoto agreement. They have opposed carbon trading because it shifts responsibility for emissions reduction towards developing countries.

Carbon trading has also encountered opposition in diverse local and national locations. Social movement groups and affected communities in developing countries have opposed carbon trading and offsetting. And, for entirely different reasons, conservatives have campaigned against carbon trading in Australia, the United States and Canada.

In Australia, conservatives oppose carbon trading because it (potentially) involves government action to limit fossil fuels. But the content of the debate has become more confused than a simple matter of energy preferences. In the long, bitter debate over carbon pricing in Australia, conservatives leveraged the contradictions and shortcomings of carbon trading in an attempt to delegitimise it. They targeted the risks associated with offsets, the failures of the EU carbon market and the regressive impact of carbon pricing. These are real distributive issues that warrant serious political discussion, but Australian political leaders preferred to exchange cynical half-truths.

The Paris Agreement will not deliver a carbon market that comes even close to the ideal trading regime economists have been after. What we are likely to see after Paris is a patchwork of emissions trading and offsets schemes that won’t reduce emissions on the scale necessary.

This is why policy-makers and others engaged in this debate should move beyond a fixation with carbon prices and stop making narrow political points about the potential reintroduction of emissions trading. No doubt the experiment in carbon trading will continue, and Australia looks interested once again in “cheap” offsets. But carbon pricing will become increasingly marginal to the debate as the case for energy market reform develops.

Meanwhile, interest in direct regulation is resurging. The Stockholm Environment Institute has been developing the case for “supply side” climate policy that involves governments in placing restrictions on fossil fuel developments. If successful, the Australia Institute’s campaign for a global moratorium on new coal mines would help keep the required volume of fossil fuels in the ground. Community groups are also seeking to democratise coal and gas licensing and planning processes, including insisting on their right to say no to companies. Public investment in renewable energies and reform of our broken electricity industry are also long overdue.

Rebecca Pearse is a Research Associate at the University of Sydney. Her PhD thesis was a critique of the long, unruly debate over carbon pricing in Australia between 2007 and 2014.

For better or worse

In the wake of the Ian Macfarlane affair, Peter Clarke talks to Brian Costar about Barnaby Joyce, Malcolm Turnbull and the balancing act that keeps the Coalition afloat 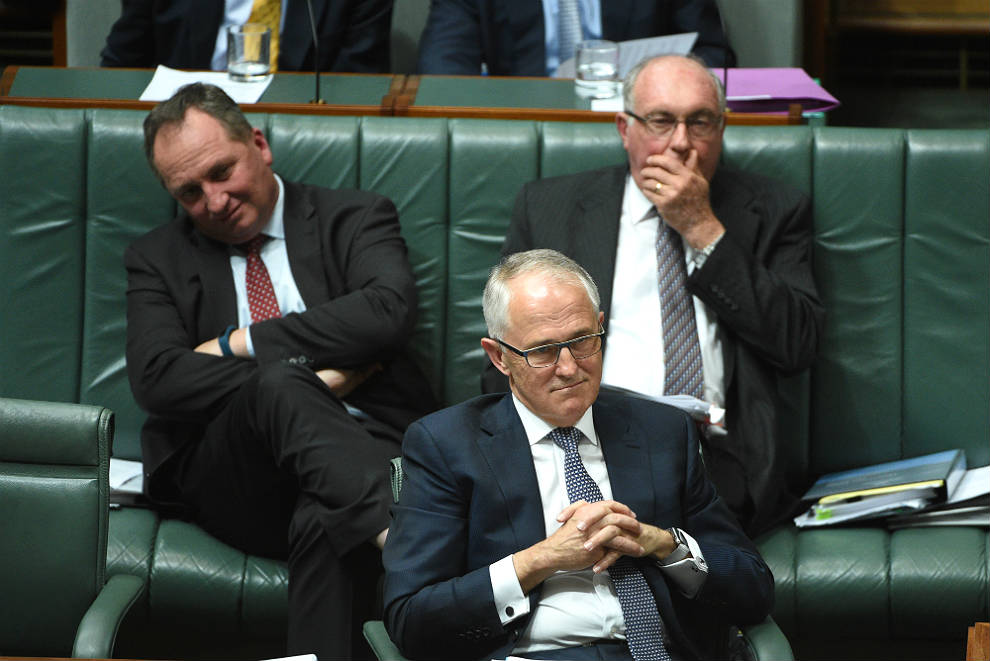