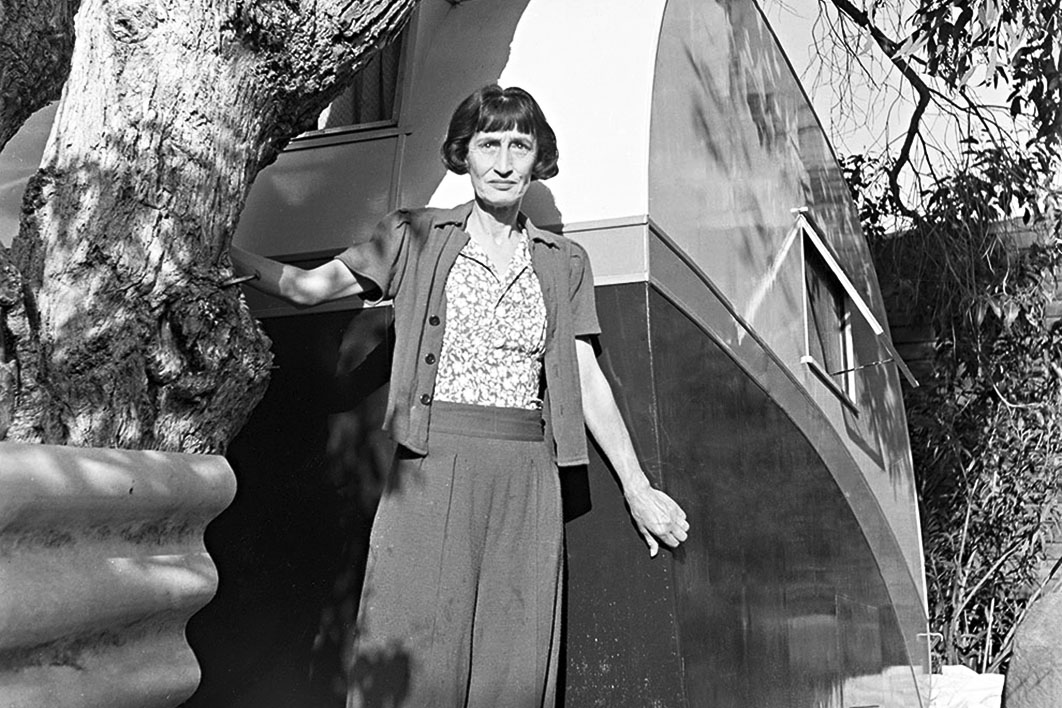 Into the Loneliness: The Unholy Alliance of Ernestine Hill and Daisy Bates
By Eleanor Hogan | NewSouth Books | $34.99 | 448 pages

Settled communities have long memories. But nineteenth-century immigrants to Australia had the scope, and often the need, to reinvent. For some women, a shaky start as a domestic servant or a governess in rural Australia might lead to a self-created past and a better future. The humiliations of a deserted wife could be obliterated.

Among the self-inventors were poet Mary Gilmore and ethnographer Daisy Bates. Hungry for recognition, these women adjusted the facts so as to become living legends.

Mary Gilmore’s biographer, W.H. Wilde, author of Courage a Grace (1988), came close to giving up on his subject because she so often strayed from the truth. Her habit of placing herself at the centre of national events she hadn’t witnessed was disturbing, as was her proprietorial attitude towards Henry Lawson. Claiming to have rejected Lawson’s love, she represented herself as his literary mentor. The strain of Wilde’s adjustment to his wayward subject can be seen in the pages he devotes to “Dame Mary’s fabrications.”

Ben Hall, the bushranger Gilmore claimed had rocked her cradle, was shot three months before she was born. Her father wasn’t the heir to a baronetcy. In her self-promoting essay “Henry Lawson and I,” she listed basic skills in which she had instructed a seemingly unlettered Lawson, claims easily demolished by the record of all that he had accomplished before he met her.

Having done his biographer’s duty in patient sleuthing, Wilde was left to question Mary Gilmore’s motives. Talking about his problems to poet and academic Dorothy Green, he found ways to understand his subject’s self-inventions. Green saw Gilmore as “a neglected woman” whose letters show that, for all the acclaim she had won, she lacked recognition of her femininity or her intellect. “To turn a woman into an Earth Mother figure,” wrote Green, “to transform her into bronze in her own lifetime… can obscure the reality of the woman as effectively as overt neglect.”

Mary Gilmore’s fabrications are brought to mind by a splendid new biography of Gilmore’s contemporary, Daisy Bates. The fantasies of Gilmore’s “Henry Lawson and I” were harmless enough. Those of Daisy Bates, in My Natives and I, were dangerous and destructive.

Eleanor Hogan, the author of Into the Loneliness, interprets Daisy Bates through one of Bates’s disciples, the writer, journalist and intrepid traveller Ernestine Hill. Their relationship began in adulation, moved into doubt, conflict and betrayal, and ended in a renewal of the protectiveness that the Bates legend inspired.

Hogan asks her readers to travel with Bates and Hill into “the Great Australian Loneliness,” where she is herself the shadowy third in the journeyings she describes. As a shrewd investigator, she questions Ernestine Hill’s assessment of Bates’s work with the Aborigines and her contribution to the myth of “Kabbarli,” their benign grandmother figure. In what might seem a digression, she also discusses her own experience as a sole traveller across the Nullarbor. She speaks of the invisibility of a forty-something single woman. Feeling little in common with the grey nomad couples she encounters, Hogan found that the upside of invisibility is “a sense of weightlessness, the freedom to roam about and observe other people, other places.” Bates, Hill and Hogan all welcomed the embrace of solitude.

When Ernestine Hill first met Daisy Bates in 1932, Hill was in search of a good story to sell to the Adelaide Advertiser and other newspapers. For Bates, this “quick and clever journalist” seemed to have dropped from the skies to organise her rambling memoirs into a readable series of newspaper articles.

Hill was drawn to the eccentric, charismatic Bates, who showed the fragility of her seventy years. Carrying a black umbrella, dressed in a tight-waisted dark serge suit, and wearing a panama hat, veil, tie and gloves, Bates never compromised the formality of the period in which she had been brought up. Living in her own tent, pitched beside Aboriginal camps, she made voluminous notes on tribal languages and customs. Although she was never given the official recognition she coveted, she won the title of Kabbarli or “Grandmother” to the Aboriginal people. Sensing a useful ally, she made Ernestine Hill her prophet.

Hill’s first article on Bates was heedless and deeply offensive. The Sunday Sun published “Cannibalism on East-West” with a subheading “Black Baby Saved from Being Eaten.” To Hill’s shame, the family “feast” she described was a fantasy. The suspect mother reappeared at the camp carrying her “bouncing baby boy.” Hill had to backtrack and to become more wary of Bates’s stories. With such an appalling start, how was it that the alliance between Bates and Hill persisted? More important, how could the Indigenous people tolerate Bates’s presence in their lives?

Part of the answer to the first question lies in the similarities between the two women’s life stories. Both had created a past to suit a solitary life. Bates claimed to belong to a privileged landowning Protestant Ascendancy family in Ireland. Her family home was in fact her father’s bootmaker’s shop in a main street tenement, and she blotted out her Catholic schooling as a “charity” pupil. When her short-lived marriage to the celebrated “Breaker” Morant ended, she met another spectacular horseman, Jack Bates, and had a son. When Bates departed, Daisy signed the contract for a third marriage, which was soon over.

Three failed marriages, two of them bigamous, must have been humiliating. But her subsequent life in the desert freed her from Victorian respectability and gave her status. Her son was collateral damage.

Ernestine Hemmings had an affinity with desert places. Daughter of restless parents who moved between Mackay and Thursday Island in her early childhood, she was convent-educated in Brisbane. After this intelligent, enterprising young woman began working for Smith’s Weekly in Sydney, she met Robert Clyde Packer, founder of the Packer media industry, with whom she had a son, Robert, in 1924. For the sake of respectability, she invented a husband and took the name of Hill. Packer died without making provision for her or their child. The experience — a lonely ordeal for Ernestine — appears to have been crucial in her later life as a freelance journalist. It led her to the desert and to Daisy Bates.

From their first meeting, Bates exploited Hill. Most of the work for the book that turned Bates into a living legend was done by Hill but never acknowledged. The Passing of the Aborigines was a huge success when it appeared in book form in 1938. As a self-taught ethnologist, Bates had a good deal to offer. Her years of observation, turned into messy notes, had obvious value, but without the order and clarity that Hill brought to the enterprise it is unlikely that any publisher would have been interested. As its title indicates, Bates and Hill thought of the Indigenous people as a dying race. Bates’s chosen mission was to smooth their passing and to keep a record of how they had lived. This appealed to many white people: whatever sense of guilt they might have felt for invasion and exploitation could be transformed into a self-sedating pity.

The pattern that emerges as Hogan examines the relationship between Bates and the Aboriginal people is deeply damaging to the idea of a protective Kabbarli figure. Bates had a horror of miscegenation. Did she collaborate with police to remove mixed-race children from their families? Hogan finds the evidence “patchy and inconclusive” but concludes that Bates’s writings about racial purity and her “notions about Aboriginal women killing their children” helped create a public ethos that sanctioned child removal.

Consistently self-promoting, Bates doesn’t deserve the reputation she won from her long years in the desert. Hill must bear responsibility for colluding with her, and so must the newspapers that carried Bates’s stories of cannibalism. Eventually, Hill recognised the wrong done by the white invaders but she could never cut herself free from Bates.

Hogan was astonished to find that the people of Oldea nevertheless loved and protected Bates. Puzzling over Hill’s capacity to forgive Bates for stealing her literary work, Hogan found an analogy in the Aborigines’ attitude to their duplicitous Kabbarli. Like other white women, Daisy Bates claimed the central role of spokesperson and protector. Look closer, Hogan suggests, and you find a reversal of roles. Daisy was the needy child, not the kindly grandmother.

Ernestine Hill, late in life, had a vision of mutuality between the two peoples. And Hogan, self-described as “more misfit than missionary” in her journeyings, experienced warmth and openness in her relations with Aborigines. Could we be friends, she asked, in spite of our history? At the least, Hogan believes, Daisy Bates should be remembered for what her story reveals about how European women related to Aboriginal people. Expunge her from the record as a self-seeking racist and we will be evading much that should be faced and understood.

Shrewd and forthright in her judgements, Eleanor Hogan isn’t punitive. Like Bates and Hill, she responds to the strange beauty of the desert landscape. Her book offers a superb portrait of the undeserving Daisy Bates and the deeply compromised Ernestine Hill. •

Brenda Niall is the author of five award-winning biographies.