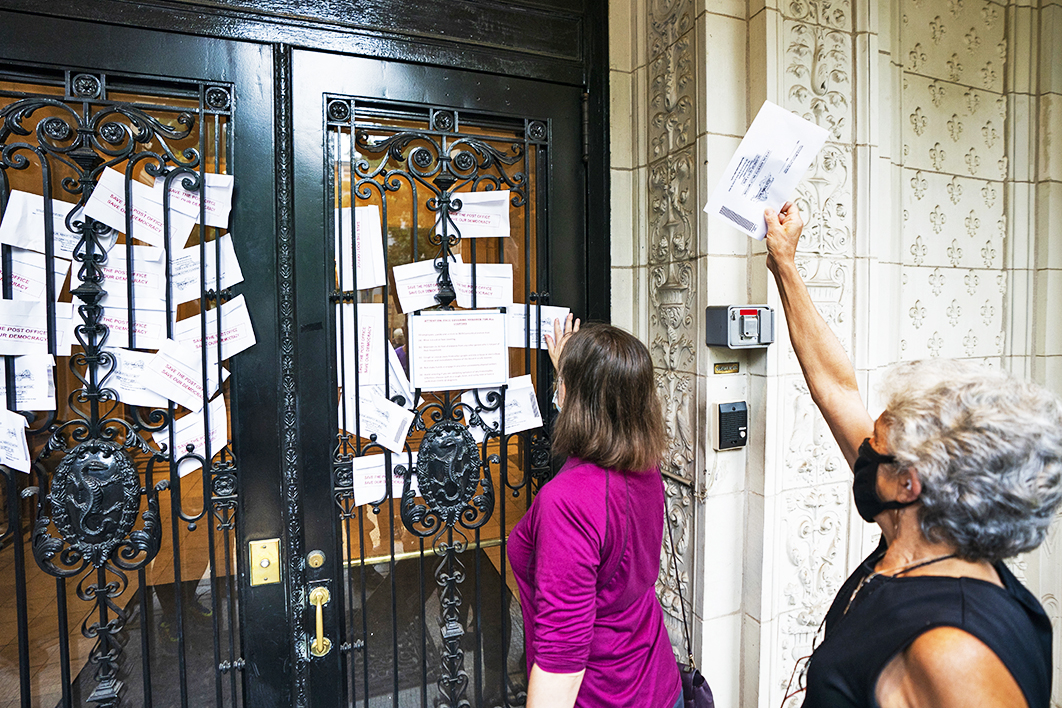 Protesters leaving envelopes labelled “Save Our Post Office, Save Our Democracy” at the apartment of Donald Trump’s postmaster-general, Louis DeJoy, at the weekend. Jim Lo Scalzo/EPA

Are you confused by Donald Trump’s claims about the evils of “mail-in” voting? It’s “horrible” and “corrupt,” he insists, yet “absentee voting” is just fine.

We Australians are particularly likely to be scratching our heads, because we have something called “absent voting” that is nothing like what Americans (and in fact most people beyond our shores) mean by “absentee voting.”

In Australia, “absent voting” is the act of lodging your vote on election day at a polling place outside your own electorate but in the same state or territory. (These days, with the liberalisation of pre-poll voting, it can also be done during the early voting period.)

“Absentee voting,” on the other hand, is defined by the International Institute for Democracy and Electoral Assistance and the ACE Electoral Network as a “mechanism by which voters are enabled to cast a vote which does not involve their attendance at a polling station on the day or days fixed for voting.”

But “absentee voting” signifies something more specific in the United States: it’s what Australians call “postal voting.” The elector fills in an application form and sends it to the authorities, and if his or her reason is deemed acceptable a ballot paper is returned to the elector to fill in and send back. (Australia also has a permanent postal voter list; people on that don’t have to go through the application process every time.)

The trend around the world (at least where postal voting is used) is to relax the constraints on postal voting. Especially in wealthier democracies, people are demanding it because it’s more convenient.

But hang on, Trump has no problem with “absentee voting.” In fact he votes that way himself because he’s registered in Florida but spends a lot of time elsewhere (including Washington, DC).

So what’s this diabolical “mail-in” voting he claims to be so worried about — the thing he’s doing his best to block by interfering with the postal service?

One of the problems with discussing the American electoral administration is its decentralised nature. Each state does things differently. (Some things even differ county by county; recall Palm Beach, Florida’s moment in the sun in 2000 with its “butterfly ballot.”)

“Mail-in” voting seems to be a recent term that refers to one of two arrangements: either every registered voter in the state receives an application form, or that step is skipped entirely and everyone gets a ballot paper.

This is what Trump claims keeps him up at night. Despite his utterances, though, his battle does seem to be against postal voting as such.

How widespread will postal voting be in the year of Covid-19? It seems that most American states are relaxing their postal/absentee voting rules in response to the virus, with some allowing anyone who applies to vote by mail, some sending application forms to all voters, and some simply posting out ballots to everyone on the electoral roll. California, the most populous state, is in the last category.

Now, Trump’s main intention is to sow doubt about the result of the election, as he did throughout 2016. It’s also believed that Democrat supporters are more likely to vote by mail this year than Republican ones because they are less likely to view Covid-19 as “fake news.” And experience shows that Democrats disproportionately suffer hours-long queues if forced to vote in person, which discourages turnout. On the other hand, people in rural areas rely on postal voting more than urban voters, and rural voters are mostly Republican supporters.

The cuts to the postal service have, in latest news, been postponed until after November, but a low turnout, whatever the cause, would serve the president’s purpose in delegitimising the outcome.

Still, many conspiracy theories contain a grain of truth, and it’s true to say that postal voting does offer greater potential for fraud than in-person voting. Most developing countries — in our neighbourhood, Papua New Guinea, Timor-Leste and Indonesia — don’t allow it (except for very limited categories such as members of the armed forces) because of the risk of vote-buying and coercion. (Also, in the first two of those countries at least, the postal services aren’t up to the task.)

In colonial Australia the introduction of the Australian ballot in the 1850s held up postal voting for half a century, for the same reasons. But today the danger of bribery or coercion is no longer seen as serious in wealthy nations like Australia and the United States.

It must be said that Americans are not good at running elections. Sending ballots to everyone seems less than ideal. Keeping track of them all will be difficult, and the process will render secrecy optional rather than mandatory. Out of the tens or hundreds of millions, some people will fill in their housemate’s or partner’s ballot. All elections see hiccups around the edges — officials accidentally mark off the wrong name, elderly people vote more than once — and when the full panoply of humanity is involved, stuff will happen, and yes, some people will behave maliciously.

But at a large-scale, organised level? Trump has claimed that mail-in voting means “thousands and thousands of people sitting in somebody’s living room, signing ballots all over the place.” In theory this is possible, but it’s also possible under the more limited “absentee” voting he uses himself. “Thousands and thousands” sounds too small to make much of a difference — no one knows in advance which states will have the razor-thin results — and mass fraud involving significant numbers would be very unlikely to go undetected. Hundreds of thousands of people would let it be known they didn’t get their ballot papers, or that they were told they’d already voted when they hadn’t.

For four years Trump has been complaining about allegedly widespread cheating, particularly in his bête noire, California, which supposedly robbed him of that national vote plurality. It’s nonsense, but he’ll do it again between now and November, and then again afterwards.

More broadly and in the longer term, government-run postal services in many countries seem headed for extinction. In Australia, our corporatised version just gets slower and slower. Who sends letters anymore? The obvious and seemingly inevitable fix is to allow voting by scanned ballot via email, or more generally to enable internet voting, but these suffer the disadvantages of postal voting and then some, notably the potential for wholesale security breaches.

When it’s over, Covid-19 will have left its mark on the way we do many things, in some cases simply accelerating existing trends. An uptick in the use of postal and other forms of convenience voting is likely to be one example, and not just in America. •

The ghost of Lang Hancock

Once again, a Western Australian government is at war with a stubborn mining entrepreneur 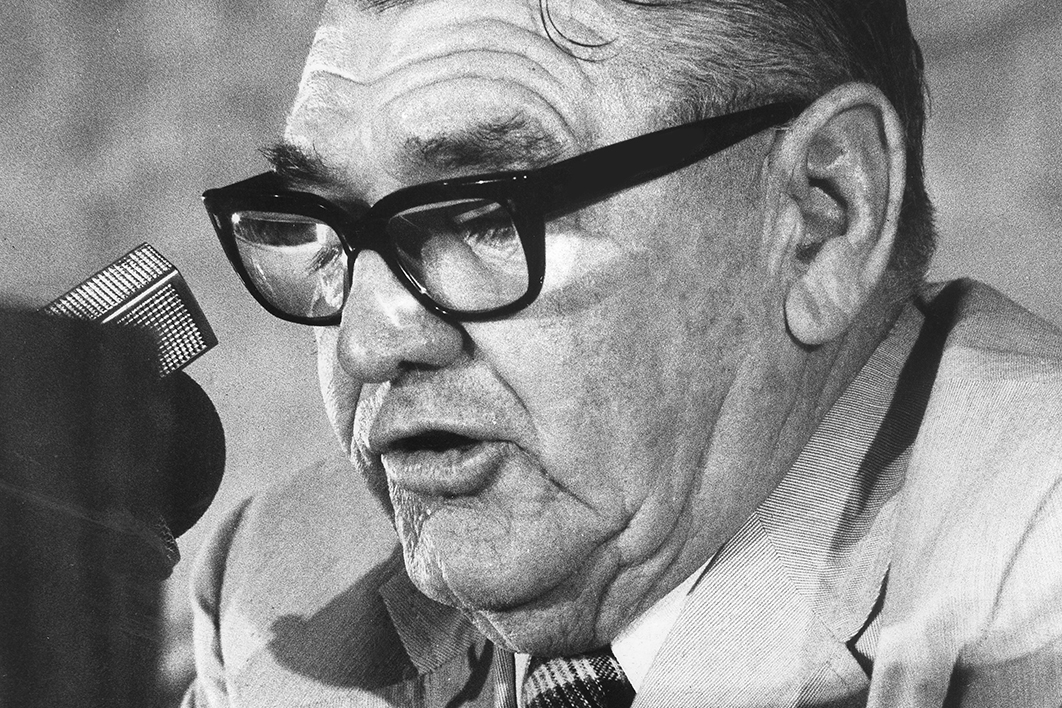