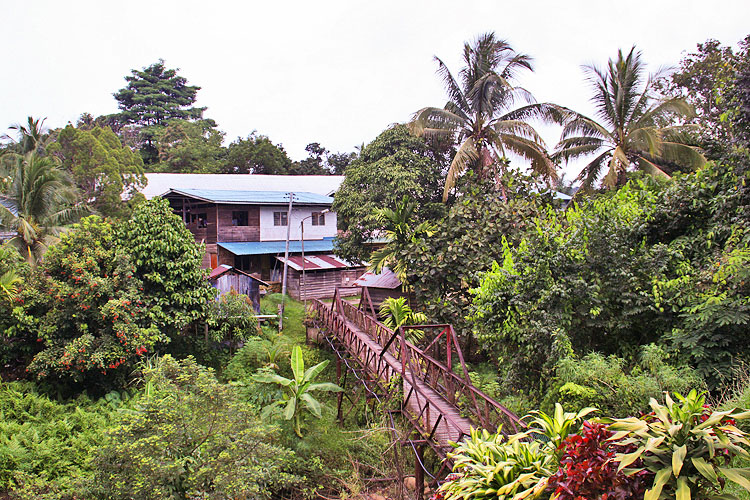 In Long Tungan, an indigenous community in rural Malaysia, local resident Ajan has recently started to experiment with solar electrification. Several medium-sized solar panels on the roof of his stairwell are connected to a cluster of interconnected car batteries. “It powers the light during the night and the television in the evening,” he says, “and in the daytime the fan and the fridge.” He opens the fridge to demonstrate that it is cold inside. “We can even run the washing machine. Only sometimes, when the weather is not good, I need to start the generator as well.”

In this part of Sarawak, not connected to the national electricity grid, small-scale solar electricity is proving successful where larger projects have failed. For Ajan, the experiment is certainly paying off. “I only bought this a few months ago, but the cost was not that high. For one panel, including the battery, I pay around 300 ringgit. The smaller ones are only 250. This whole setup cost no more than 1000 ringgit.” At this price, two large panels with batteries and an inverter can pay for themselves within a month or two, depending on usage. This means that solar installations have become affordable even here, where most people have little income other than from cash crops and their children’s remittances.

Downriver, the community of Long San is also looking to small-scale solar, after years of failed projects by the Malaysian government and non-government organisations to bring electricity to the area. At present, Long San’s clinic, airport, and primary and secondary schools (which serve the whole region) all rely on diesel or petrol generators. Fuel has to be hauled in from the coast via logging roads, a drive of at least four hours in good weather. Villages in this part of Sarawak are only accessible via logging road, like this one near Long Julan, Baram. Christine Horn

In 2009, the Malaysian government agreed to fund a mini-hydroelectric project in Long San, to provide electricity for the whole community. Cables were installed across the village and switches fitted in each house. But after a reported RM2.4 million (A$760,000) had been spent, the project was abruptly abandoned. It was part of a pattern of failure with mini- and micro-hydroelectric projects – sometimes including solar installations – in Sarawak’s rural communities.

Then, as part of the Sarawak state government’s project to build twelve hydroelectric “mega dams,” a dam on the Baram river was proposed, which would have seen Long San under one hundred metres of water by 2020 because of its location within the reservoir area. But after months of protests and blockades, the dam project was finally put on hold this year. People in Long San and the surrounding villages point out that the hydroelectric dam would not, in any case, have provided the area with electricity. The Bakun dam, a hydroelectric project in Sarawak completed in 2011, caused the resettlement of thousands of indigenous people, but in their new resettlement site people still rely on generators, with the electricity transmission lines from the dam looming overhead.

Over the past two years, Long San has begun to develop solar power options. At first, small solar-powered devices, like radios and LED lanterns, appeared around people’s houses. Then, people started using solar panels just larger than an A3 sheet of paper and connected to a battery with an integrated inverter smaller than a shoebox. These can power several LED light bulbs for a whole night. More recently, larger panels have become available, which can power other electrical devices as well.

What has made solar panels available at this price, and how has the technology become accessible to people in this remote region?

The answer lies a couple of kilometres south of Long San, in a place locally known as Kilometre Ten, or Kilo Ten, otherwise known as the Samling Baram Central Base Camp. It is the local headquarters of the biggest logging company operating in the area, Samling Timber Sdn Bhd. Kilo Ten is a village of its own, with accommodation for workers and their families, shops, canteens and several restaurants, a church, a nearby veneer factory, a helicopter pad, various mechanics workshops, and the company’s local offices. The size of the camp suggests the scope of Samling’s operations in the area. During the day, logging trucks laden with the relatively scrawny leftovers of decades of timber extraction make their way past the camp to the central log pond. Samling has been a feature of people’s lives here for years. According to one estimate, 30 per cent of households in rural Sarawak have no access to grid electricity, and must run their own generators, like this one at Long Moh, Baram. Christine Horn

The source of the blossoming solar electrification in the area, however, is only loosely affiliated with the camp itself, and has in fact recently been banished from its previous location near the workshops. In a small cluster of shops, now in a shack outside the camp gates, a team of four or five Chinese shopkeepers display their stock for company employees and others passing through on the main logging road adjacent to the camp. These shops and their products have provided solar technology to the area for over two years.

The shops offer all the electrical goods that people in rural communities need, and more: from tinted headlamps for hunters to karaoke machines; from rechargeable fans to remote-controlled drones; and, yes, solar panels. The panels come in different sizes and are sold together with all the necessary parts, including the inverter, battery, cables, and four LED light bulbs with fittings. Several USB ports for charging phones are integrated in the battery case. One shopkeeper helpfully points out the technical details, and shows customers images on her smartphone of the products in use. She comes from a small town in China and goes back every Chinese New Year to see her children. Her husband also works in Kilo Ten, but she does not say how both of them came to be here. Every day, she and her colleagues sell solar equipment to the people passing by on their way to the villages. Battery and inverter tucked away in a kitchen in Long Selaan, Baram. Christine Horn

The success of the solar technology sold at Kilo Ten can be attributed to the fact that it is cheap, easily installed and readily replaced if broken. Peter, a local from Long Mekaba, a village some way upriver from Long San, put it this way: “I bought the panel and the battery for my house, but I didn’t expect it to last long. The quality does not seem to be that good. But it has already lasted for two years. And even if the battery breaks, for example, I can just get a new one at the shop.” As for the cost, Peter said that it was not a big problem. “They are really cheap. If you buy this kind of thing in Marudi [a bigger town nearby] or in Miri [the main city in the area], you will pay at least twice what you pay at Kilo Ten.”

The supply strategies of the Kilo Ten shops probably leave a bit to be desired, which may well account for the competitive prices. In any case, these shops have been the key to the rapid uptake of solar technology in the region. They have made the technology available at a price people can afford, in a central location that is easy to access because the main road passes by the camp. The low prices allow local people to take the risk of investing in a new technology, even if they don’t know whether it will pay off. The different options available allow each family to buy a system that is tailored to their needs and budget. Although these children in Long Loyang are watching a TV powered by a generator, the spread of solar could one day provide cheaper, more secure power. Christine Horn

The story of rural electrification in Long San and the surrounding area suggests that the technology is already a viable alternative for local people. For governments in developing countries, as well as non-government organisations and researchers in the field, this may mean that it is time to look beyond community-based options – which can suffer from a range of problems, such as misappropriation of funds, faulty planning and tricky maintenance – and instead focus on promoting cheap and readily available solar devices to encourage individual solutions. In this way, individuals are empowered to control each step, including investment, installation, maintenance and repair.

For Ajan, the investment in solar energy is going to pay off soon, but not everyone has caught on yet. Most people in rural Sarawak still use generators, but things could be changing. •

Raine Melissa Riman and Christine Horn are part of a larger research team investigating internet and mobile phone use in rural Sarawak. Raine is based at Swinburne University of Technology’s Sarawak campus as a Research Associate and Christine is a Postdoctoral Research Fellow at Swinburne’s Melbourne campus.