An old-fashioned kind of guy

Despite the Brexit shock and a discouraging shift in the polls, Bill Shorten performed capably at today’s Press Club lunch 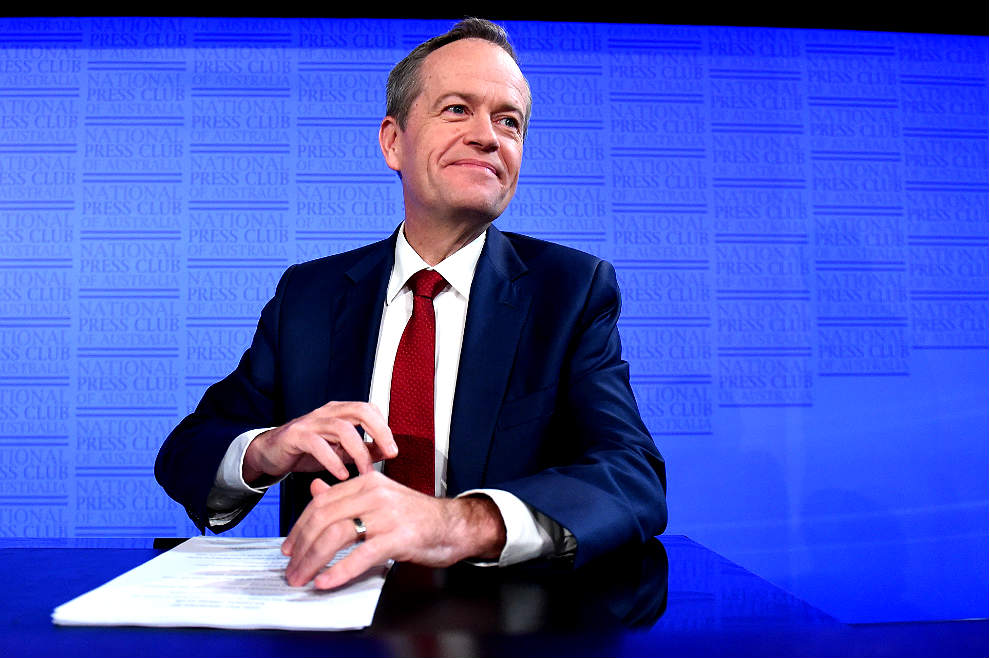 Bill Shorten believes he has found the defining quotation of the 2016 election campaign. Campaigning in Queensland earlier in the week, Malcolm Turnbull had answered a journalist’s question by declaring, “What political parties say they will support and oppose at one time is not necessarily ultimately what they will do.” This is Shorten’s gotcha moment.

If it’s meant to be the equivalent of John Howard’s “Beazley’s black hole” accusation in 1996 or Mark Latham’s aggressive handshake in 2004, or even “the real Julia” moment in 2010, then the Labor leader is surely in some difficulty. As the ABC’s Sabra Lane pointed out during Shorten’s final National Press Club appearance in Canberra today, Turnbull’s statement was an attack on Labor’s backflipping, not an admission of his own intentions.

Does this suggest a measure of desperation? Possibly so, but Shorten’s Press Club speech was otherwise a fairly assured performance. He conceded that the Coalition’s claims about Labor’s plan to run higher deficits might pose some dangers, but minimised the differences between the two parties. His references to Brexit also indicated a fear that Turnbull’s call on electors to vote for the Coalition and stability has been hitting home.

Shorten’s response was to argue that what Brexit actually shows is the danger of leaving people behind in an age of globalisation. The Brexit vote was a protest against inequality and marginalisation by voters who felt they had been forgotten. Shorten called for “inclusive economic growth,” a “fair go all round.” This was a sensible effort to grapple with an unfortunate intrusion of an asteroid-like object into the Australian election campaign, but it seems like the damage has already been done. It mightn’t be 9/11 – fortunately – but it will surely have helped the incumbent round up some waverers at a time when the parties remain close in the opinion polls.

The Press Club speech had a strongly personal note – not to the point of solipsism, but suggesting that Shorten wants to stamp his own interpretation on his term as opposition leader, and on the eight weeks of the campaign itself. Some in the media, he said, had written him off back in September when Turnbull overthrew Tony Abbott. But he had responded by travelling around the country, getting “back to basics,” talking to ordinary voters in town hall meetings and community gatherings. It’s an image of Shorten as a man of the grassroots, a return to the methods of the union organiser, listening and talking – he even got in a reference to the Beaconsfield mine disaster, the moment when he entered the consciousness of many Australians for the first time.

This is an old-fashioned image, quite different from any Labor leader of the recent past; democratic, populist even, the Labor leader as a man there to represent those who can’t ask a question in parliament and don’t have a slot on Sky (to paraphrase Shorten). There is little doubt that this is an authentic self-image, even if it does have a ring about it of a man who knows he’s up against it: one seeking to produce an early draft of history; a draft – perhaps – that he might need in order to persuade his party that he should be kept on after the election (as he should be, as I’ve previously suggested in Inside Story, assuming at least an honourable defeat on Saturday).

Shorten also presented as the can-do man, with an “old-fashioned focus on good public policy” and a desire to restore that “Hawke model of consensus.” He will work with the Senate. He will include the opposition.

All the same, consensus is not to be mistaken for convergence; he’s keen to place more daylight between Labor and the coalition than has been customary in many recent elections, and notably in Labor’s last real victory: 2007. He would introduce a marriage equality bill as the first legislation of a Shorten Labor government, rather than wasting money on a plebiscite. He criticised the Coalition’s proposed $50 billion company tax giveaway. He condemned trickle-down economics as a worthless legacy of the Reagan and Thatcher era. He even raised the spectre of a 15 per cent GST, suggesting that this was really what Turnbull wanted most amid the shambles of his switching between ideas about tax reform a few months back. He continued the “Mediscare” attack on the Coalition, moving away, just a little, from the abstract rhetoric of “privatisation” and pointing to the manner in which government cuts were imposing greater burdens on the ill in a supposedly universal system of insurance.

There were no great surprises in the substance of Shorten’s speech, or in the image he projected: that of the underdog repeatedly written off but refusing to give in. In question time, he was no more or less evasive than one might expect – and some of the questions, in any case, were so complex that it’s hard to imagine anyone outside the parliamentary press gallery engaging with their substance.

It was the vibe of this performance that mattered, not the detail. And Shorten presented as an old-fashioned sort of guy who’d stand up for the ordinary man or woman in the street not quite convinced that this is the most exciting time to be alive. •

Frank Bongiorno is in the School of History at the Australian National University.