Another day closer to a result

We’re starting to see the shape of the next parliament more clearly, says Peter Brent 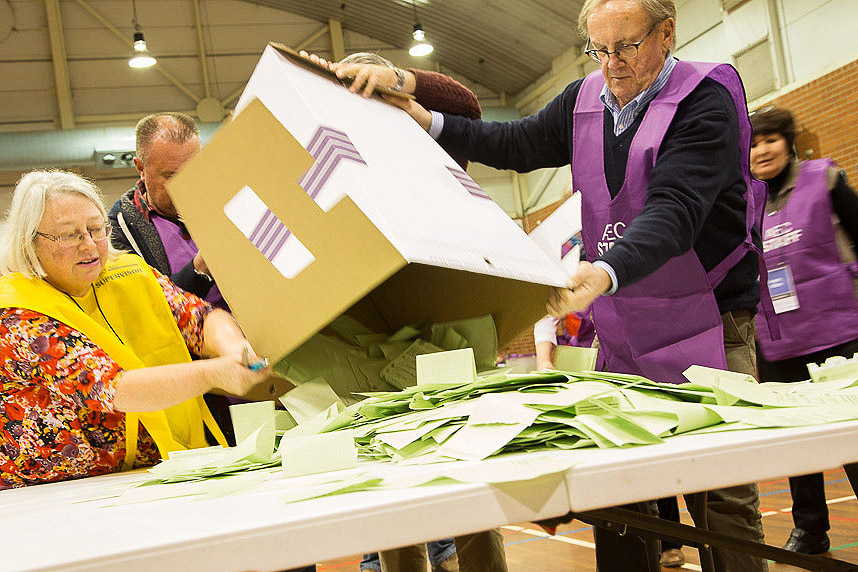 Before the surge: the election night count had a larger pro-Labor bias than usual. Australian Electoral Commission

With approximately 78 per cent of the electoral roll (or around 85 per cent of likely turnout) counted, combined primary votes for Labor and Coalition parties at Saturday’s election sit at just 77.3 per cent.

The fact that almost a quarter of the electorate cast a primary vote for a minor party or independent can rightly be cast as further evidence of the continuing decline in attachment to the old parties.

The depleted major-party vote is not the main cause of the close overall seat outcome, though. It contributed a little in the sense that five seats going to “others” makes a hung parliament slightly more likely. But the same sized crossbench in 1996 didn’t prevent a Coalition landslide.

Nor is the close tally a function of the fact that the national two-party-preferred vote is hovering around 50–50 on the Electoral Commission’s website. Apart from the incomplete count across the country, this total comes from only 136 electorates. When all 150 are fully counted, the Coalition’s vote should land on about 50.5 (and Labor’s on 49.5), and that vote just happens to disaggregate to a close electorate contest this time.

For context, in 1998 John Howard famously survived, with eighty seats out of 148, despite managing the lowest winning aggregate two-party-preferred vote on record, just 49.0 per cent; in uniform terms, another half a per cent or so for Labor (giving them a total of 51.5 per cent) would have produced a hung parliament. In 1987 the Hawke government was re-elected with a very big seat majority (eighty-six out of 148 seats) from 50.8 per cent of the vote.

Incumbent governments usually do well in the aggregate vote–seat equation, but not so much this time.

Note also that the five “others” would have been seven had the Liberal Party retained its longstanding policy, only abandoned in 2013, of placing the Greens ahead of Labor on how-to-vote cards across the vast majority of lower house seats. Friendly Liberal cards would have delivered the Greens Batman (definitely) and Wills (almost certainly) on Saturday, on top of Melbourne.

If this parliament does remain hung, the Liberals may regret that decision.

As the count drags on, the stronger-than-anticipated surge in Coalition support this week has two chief causes. Most important is the record high proportion of postal votes, partly fuelled – perhaps – by a particularly energetic Liberal Party postal vote campaign. In 2013, postal votes accounted for 8.3 per cent of the formal vote; they will probably hit 9 per cent or so this time. So far, those counted (predominately in close seats and certainly not a random sample) have leant to the Coalition (relative to the rest) even more than postal votes have in the past.

The other, minor cause is absent votes – those cast on election day, away from home, but in the same state. Counting for these only began on Thursday. Absent votes traditionally favour Labor, but they have declined as a proportion of turnout because many who in the past would have cast one are instead pre-polling and so having their vote tallied on election night. They look like dropping from 4.7 per cent of 2013 votes counted to (at a guess) 4.4 per cent this time.

All in all, the election night count had a larger pro-Labor bias than it usually has, and it looks like the 2016 seat outcome will be more like the 1990 result (seventy-eight seats for an incumbent government) than the 2010 one (seventy-two seats).

It is unlikely, though not beyond the bounds of possibility, that the Coalition will hit seventy-eight. That would probably represent the mid-point of pre-election general expectations, including the commentariat consensus, and would render this week’s flurry of fourth-estate fuss and bother about getting it so wrong rather obsolete.

The barrage of criticism fired at prime minister Malcolm Turnbull from his own side since Saturday night, however, can’t be undone.

The national published polls got the result pretty much right. The individual seat surveys, both for publication and leaked by parties, didn’t cover themselves with glory – but then they rarely do.

(It can be argued, however, that party polling accurately estimated the quantum of seats that would change hands, if not the specifics. So in Queensland, Petrie stayed with the LNP against expectations, while Longman, it appears, has bolted. In New South Wales Gilmore was considered in play but Labor got Macquarie instead.)

While the Senate looks set to contain a very big crossbench, it is too early to call Turnbull’s double dissolution a blunder. A half-Senate election would have seen Dio Wang, Ricky Muir and Glenn Lazarus remain, and they have been troublesome for the government. All appear to have departed. Yes, there’s Pauline Hanson and Jacquie Lambie, but the lower quota enabled two or three Nick Xenophon Teamsters to gain a place, which, provided they remain cohesive, can be expected to be relatively government-friendly.

We will have to wait and see.

This writer, having anticipated a big Coalition win, will not attempt to explore the whys of this result. Except to note that we should be wary of received reasons that quickly consolidate after every outcome.

Apart from anything else, had the AEC’s counting practices been different, producing an unexpected skew towards the Coalition on Saturday evening – say, a lower house haul in the low eighties – which was whittled down as the week progressed, that would have facilitated a very different commentariat reaction.

The two recent Labor state victories, in Victoria and Queensland, were subsequently explained by old-fashioned grassroots, door-knocking union campaigns. It seems this always works a treat – except when it doesn’t (as in New South Wales and Tasmania).

Similarly, the true power of the “Mediscare” campaign will remain an unknown. But complaints from senior Coalition figures of its being unfair for the opposition to “lie” to voters are more than feeble.

Both major parties run untruthful scare campaigns when they can. We don’t have to go back to earlier campaigns to find a Coalition example; instead, note this year the government’s thundering that Labor’s housing policy would smash mums’ and dads’ portfolios and cause a run on the stockmarket.

The Coalition is traditionally better at conjuring these horror scenarios.

Labor just got one right this time. •