Much of the James Bond style comes down to the music 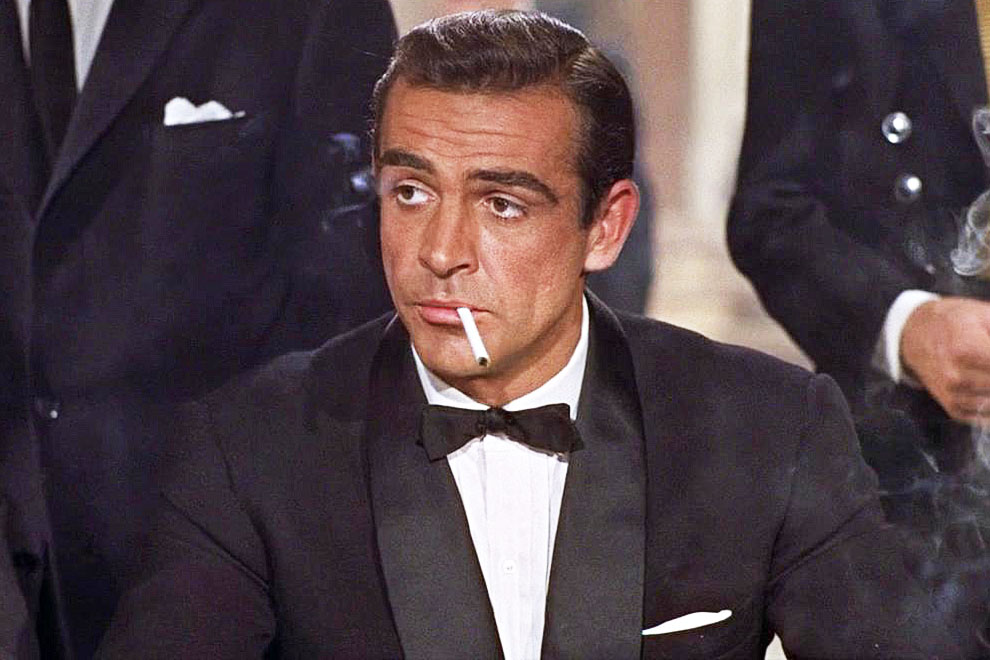 The Beatles? Sean Connery as James Bond in Dr No.

It is only at the end of their fascinating, shrewd and often quite funny book, The James Bond Songs, that Adrian Daub and Charles Kronengold admit they are not “superfans” of either the songs or the films. Had they failed to confess this, we would never have guessed. Their knowledge of the Bond franchise – literary, cinematic and musical – is thorough and well-informed, and their ability to make connections suggests they have spent much of their lives in the company of Agent 007.

I wouldn’t call myself a “superfan” either, but I like the songs – especially the early songs – and I’ve always liked the films. I know I shouldn’t, and I know the reasons why; but I do, and I’m looking forward to Spectre, the twenty-fifth movie in fifty years. I don’t expect it to be a great film – none of the previous twenty-four was – but I anticipate two hours of classy, mindless, entertainment.

I saw my first Bond film in the cinema in 1965. I was eight years old and had been taken by my grandmother. The film was Thunderball, and what I recall most was a scene in which Bond arrives at his hotel to find a woman in the bath. She asks if he will pass her something to put on, and Bond hands her a pair of sandals. My grandmother roared with laughter at this, then had to explain to me why it was funny. Even as I attempted to visualise a naked woman stepping from a bath, I remember feeling quite proud that I now understood a grown-up joke.

And, of course, there it is in a nutshell: Bond films are aimed at grown-ups with a mental age of eight. They have goodies and baddies, fast cars and corny jokes, so why should we care if the plots don’t make sense? Not that an eight-year-old would have noticed, but back in the 1960s the films were also full of casual sexism and racism, and they still have their moments, even if these aren’t as jaw-dropping as in some of the early films. In Goldfinger, Bond dispatches a masseuse called “Dink” with a slap on her swim-suited bottom because he and his American counterpart, Felix Leiter, are about to have “man talk.”

Studied political incorrectness was always part of the show. In the opening, pre-credits scene of For Your Eyes Only, Bond, in a helicopter, picks up a man in a wheelchair and drops him down a chimney stack. It’s true the man in question has been remotely controlling the helicopter and wishes Bond only harm, but it’s the image of him and the wheelchair disappearing down the gasworks chimney that lingers. For Your Eyes Only was released in 1981, the UN International Year of Disabled Persons.

So, given the expensive cars, dangerous stunts and off-colour jokes, the sexism, racism and laddish obsession with gadgets, the question is what do Sean Connery or Daniel Craig have that Jeremy Clarkson doesn’t? The answer, in a word, is style, and as Daub and Kronengold point out, much of that comes down to the music.

We think of Bond’s style as being up-to-the-minute – especially in terms of the gadgets – but in most regards, he’s an old-fashioned fellow, and this is nowhere more true than in his musical tastes. In Goldfinger, he insists that drinking 1953 Dom Perignon at a temperature above 38 degrees Fahrenheit just isn’t done. It’s “as bad as listening to the Beatles without ear muffs.” This was 1964, the height of Beatlemania.

In the 1960s, Bond songs were distinguished by their chromatic harmonies and melody lines, which were largely absent from contemporary pop but common enough, the previous decade, in the standards sung by Frank Sinatra with the Nelson Riddle Orchestra and in the jazz-laced movie themes of Elmer Bernstein. Monty Norman’s “James Bond Theme,” particularly after James Barry supplied its opening power chords, belongs in such company, and many of the films’ individual songs follow suit with harmonic and melodic borrowings from the theme.

The familiar four-note Bond motif starts on the fifth note of the scale, creeping up to the minor sixth, then the major sixth, then back to the minor sixth; in the key of E that is: B – C – C sharp – C natural. It’s everywhere in the films, including the songs, from “Goldfinger” (which Daub and Kronengold call the first real Bond song) to “Skyfall.” The rising fifth is also prominent in the songs’ melodic lines (“Gold–FIN–ger,” “Diamonds Are For–ev–ER,” “Sky–FALL”); sometimes it’s a falling fifth (“For Your Eyes On–LY”). The songs, like the films, are formulaic, and at their most successful when sticking to the formula.

Daub and Kronengold explain that the Bond songs were always from another age, structurally resembling the traditional love ballad or murder ballad. The authors posit Brecht and Weill’s “Mack the Knife,” with its picaresque tale of a glamorous villain, as a prototype for the song “Goldfinger.” This was the only Bond song explicitly about a Bond villain. More commonly, it is hard to say who or what the songs are about, apart from being vehicles for repeating the name of the film. Who is the “you” in “You Only Live Twice”? Who is the “he” in “Thunderball”? The latter might be Bond himself, though, if it is, then it’s difficult to explain a line such as “His needs are more, so he gives less.” (Actually, it’s difficult to explain that line in any circumstances.)

In the 1970s and 80s, the style of the songs shifted towards mainstream pop, though it was still out-of-date pop (Paul McCartney, post-Beatles, and Carly Simon). However, in the 1990s – an era of retro nostalgia – Bond’s songs recaptured their original qualities, from the brassy chromaticism to the strident, torch-song tones of Gladys Knight (“Licence to Kill”) and Tina Turner (“GoldenEye”) standing in for Bond’s ur-voice, Shirley Bassey (“Goldfinger,” “Diamonds Are Forever” and “Moonraker”). We must remember, however, that those Bassey songs were themselves nostalgic, emblematic, like the man himself, of a mode of behaviour (suave, chivalrous, sexist), a sense of style, and indeed an empire that had all but slipped away.

The subtitle of Daub and Kronengold’s book is “Pop Anthems of Late Capitalism” and this is a trope to which they regularly return. Their contention, echoing economist Joan Robinson’s view that modern capitalism’s sole function is “to keep the show going,” is that the Bond franchise likewise has only one purpose, which is to continue. When Tom Jones sang “His fight goes on and on and on” in “Thunderball,” he might have been anticipating Margaret Thatcher’s vow before the 1987 British election.

Yet if, as the authors argue, the Bond films and their songs reflect late capitalism – certainly both have had their ups and downs over the past half-century – one imagines capitalism will see Bond out. When they do finally stop making the films, it will be another small nail in capitalism’s coffin. •

Composer Andrew Ford presents The Music Show on ABC Radio National. His books include The Sound of Pictures: Listening to the Movies, from Hitchcock to High Fidelity. His interview with the authors of The James Bond Songs can be heard here.