Diane Austin-Broos responds to Tim Rowse's review of her book, A Different Inequality 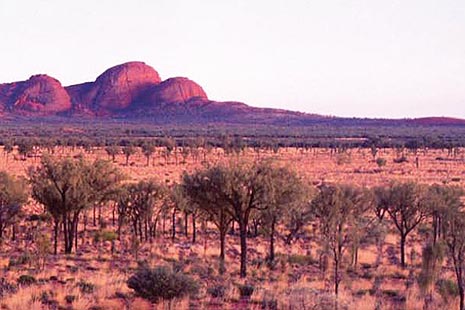 Detail from the cover of A Different Inequality. Matt Lauder Photography

IN HIS review of my book A Different Inequality, Tim Rowse’s opening paragraphs ridicule my concluding remarks concerning education as a political focus for those who support remote Aboriginal communities. Given that education is a central if not pre-eminent concern of most Indigenous leaders, both regional and national, not to mention the numerous parents I have met on outstations and in Central Australian regional towns, one wonders where Rowse is coming from. Let me clarify the matter by stating my book’s central themes, which Rowse does not enunciate. Readers should turn to the book itself for my critique of the neo-liberal right on education and other matters, which Rowse also fails to mention. My focus here is on a critical position alternative to Rowse’s flawed politics which seem to ostentatiously neglect education and employment policies for remote Aboriginal youth.

The book addresses anthropology and its method as it pertains to policy that bears on remote Aboriginal life. As economist Bob Gregory has remarked, the book is about the ideas behind policy rather than policy-making as such. I wrote it not simply because I am an anthropologist but also because, among the disciplines in universities, the accumulated knowledge of remote Indigenous life is probably greatest in anthropology. At the same time, prominent anthropologists have complained in recent years that they have been sidelined in policy-making. Other writers have suggested that, with the rise of wise and forceful Indigenous leaders, anthropology is no longer required. That is not my view. As I remark in the book, I criticise the discipline in order to defend it.

The book considers two debates, one within the academy and one within the public domain. One is a “post-colonial” debate within universities, in which historians and some exponents of Indigenous studies have argued that anthropology is disinclined to consider Aboriginal people as historical subjects long involved in struggles for political and cultural rights and material well-being. Certainly, and with some notable exceptions, writing on these matters has not been prominent in anthropology. The second debate pertains to remote Aboriginal communities, a debate that preceded and has continued since the Howard government’s Northern Territory Intervention in 2007. This debate is not about the Intervention as such. Rather, it concerns the forms of policy, largely economic, that are relevant to remote Aboriginal communities. The two debates have a characteristic in common. While the post-colonial one is sustained by critics on the left, and the remote communities debate mainly by critics on the right, both take anthropology to task for too little attention to pervasive forms of change among Aboriginal people.

The first of three major themes in the book concerns a central component of this change: the inclusion but marginalisation of remote Aboriginal people in the Australian economy that was and is an integral part of their initial forced inclusion in the Australian state. Phrased differently, my argument is that the anthropology of remote Aboriginal life should be more historically oriented because the vast majority of remote Aboriginal people no long sustain a hunter-gatherer economy as such. Anthropology 101 teaches us that when such a change occurs, there will be other major changes that will often not be smooth or pleasant for the people involved. Indeed, remote Aboriginal people struggle daily with conflicting forms of value that occur between different generations and between different spheres of life. Understanding this fact is crucial to understanding the daunting epidemiology that most communities exhibit today. In his recent book, Jonathan Hunt, a doctor with extensive remote community experience, ascribes this epidemiology directly to economic marginalisation, as does the Indigenous leader and anthropologist Marcia Langton.

The second major theme of the book is that, during the last thirty years or so, anthropologists have invested extensively in a politics of difference at the expense of a politics of economic inclusion or equality. The flagship of this politics of difference has been land rights and native title. Where land rights is concerned, and notwithstanding the legislation involved, a telling argument can be made that its advent had as much to do with an expanding mining industry and United Nations pressure as it did with a government propensity to respect cultural difference. In short, the orientation of the nation state has always been, sometimes in spite of itself, towards assimilation. This has made the defence of cultural difference a pressing task for anthropology. Moreover, the discipline found its principal niche in the role of providing expert witnesses for the many land claims that occurred under federal legislation in the Northern Territory. This role of defending cultural difference, however, also threw the burden of anthropological work away from socioeconomic change and towards cultural continuity. Defending this land rights culture and its social corollary – the establishment of small and remote “homeland” communities – has become the pre-eminent concern of many anthropologists. Indeed the prominent view has been that one cannot defend Aboriginal cultural difference without defending its required environment – remote and small-scale communities. For this reason anthropologist Jon Altman, whom Tim Rowse supports, has argued against the pursuit of what he calls “statistical equality” in employment for remote Aboriginal people living in homeland communities. “Policy realism,” he states, dictates that the majority of these communities can never reach levels of employment that are comparable to those elsewhere in Australia. Moreover, given that in the last thirty years out-migration has been very modest, different types of policy option should be found for these communities.

Altman’s argument has some merit but it also has some problematic aspects. First, such a position does not canvas the cost in terms of health of his policy stance. Second, it does not consider the political ramifications, let alone the economic ones, of very limited mainstream education for remote Aboriginal youth who are not only culturally different but also citizens of the Australian state. The neglect of this education’s importance for grassroots self-determination is troubling. (As part of recent consultations on revisions to the constitution that would truly include Indigenous peoples in Australian society, an agreement-making facility has been canvassed – including the capacity of individual communities to make agreements with federal government. What possible meaning can this process have for remote Aboriginal youth who are functionally illiterate?) Third, Rowse, like Altman, seems to identify the statistical fact of little out-migration over the past thirty years with the absence of aspirations among remote community youth. Noel Pearson remarked in 2000, “The gulf between the dreams that Western media inspires in our young – and [their] real capacity to fulfil even modest aspirations – is vast… Can we see a future where our young people move successfully between both worlds [and with] complete facility?” In short, to what extent does lack of a relevant education shape the current statistics on migration? And fourth, nor does this position address the degree to which government transfers, in the form of pensions, welfare and the like, obviate the need for migration as they simultaneously induce anomie, substance abuse and its attendant ill-health. An entirely appropriate defence of Community Development Employment Projects can turn toxic if it does not also canvas demonstrated downsides. Lack of attention to these issues reveals a privileging of the politics of difference over the politics of equality. My argument is that if anthropologists wish to be heard on the matter of cultural difference, they need to take inclusion in Australia’s economy more seriously.

A third theme in the book is that anthropologists interested in policy need to address the full range of remote communities including Hermannsburg in Central Australia, where my links go back to the late 1980s. Although it is the site of extensive historical change, Hermannsburg is also the service hub of a very large network of outstations or “homeland” communities. A simple and direct way of responding to this site’s history is to acknowledge that labour market approaches to employment, including mainstream education to expand capacities, should be given at least equal weight with the community-based approach favoured by Rowse and Altman.

There are a couple of reasons why many anthropologists struggle with this prospect. Notwithstanding Pearson’s observations, mainstream education, like out-migration for employment, is seen by many as assimilationist. An aspiration for “employment parity” among remote Aboriginal people is seen to assume that “assimilation is inevitable.” But does this mean that generations of employed Aboriginal and Torres Strait Islanders resident in eastern, southern and western Australia are simply “assimilated” – or do they sustain family, land and community dynamics that make them still distinctive peoples? Should anthropologists foreclose on possibilities such as these for at least some among those who live remote?

A second reason why many anthropologists struggle with this proposal is that they are accustomed to thinking of self-determination in terms of corporations that defend cultural difference. They are unaccustomed to thinking about the economic issues in self-determination. Neither do they reflect on whether or not a form of politics coincident with high rates of functional illiteracy in many communities can be called a “success” in self-determination terms. It’s true, as Rowse observes, that I do not propose specific policies on education. Rather, I describe it as an appropriate focus for a politics that seeks to extend self-determination at the grassroots level. Anthropologists, with their knowledge of cultural difference, can be of assistance here. My book suggests that this type of input would be more useful than continuing to defend a limited and limiting politics that sounds good in the academy but falls short in the lived experience of remote Aboriginal people. •

Diane Austin-Broos is Emeritus Professor of Anthropology at the University of Sydney.

Directors of the Liberals

Fifty years ago Australia’s major parties had limited resources and few staff. But one party had an edge over the other, writes Don Whitington in this essay first published in Nation in October 1961

The prime minister, Sir Robert Menzies, at a press conference following his return from an overseas trip four years after the article was written. W. Pedersen/Australian News and Information Bureau/National Archives of Australia 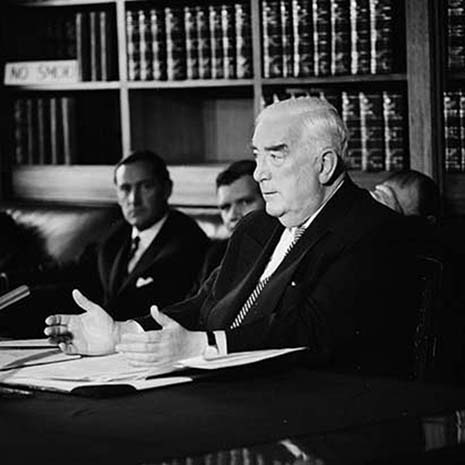 The prime minister, Sir Robert Menzies, at a press conference following his return from an overseas trip four years after the article was written. W. Pedersen/Australian News and Information Bureau/National Archives of Australia