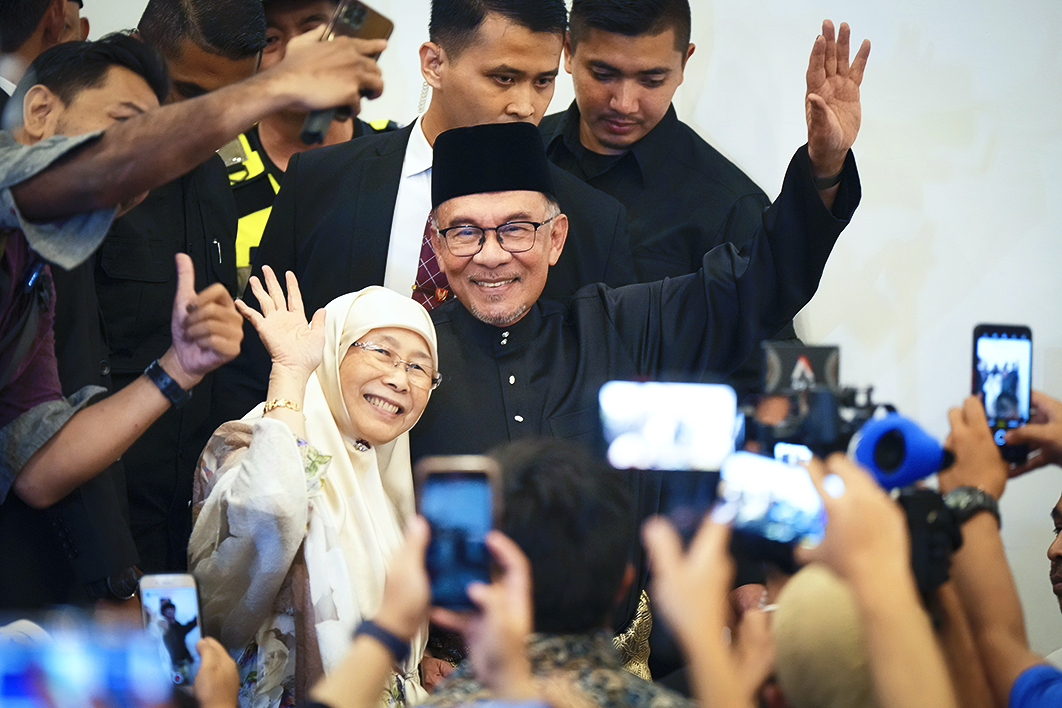 It was a declaration of war from a man who ought to have been resigned to defeat and surrender years earlier. Anwar Ibrahim stood in the dock of the Malaysian Federal Court in Kuala Lumpur and railed against the three robed judges who stared at him in stunned silence across the colonial-era chamber.

“Justice is courage, the courage of conviction,” Anwar seethed on that day in July 2002. “God willing, the day of justice will return, and I call on the friends of justice to remain steadfast. We shall clear the rubble — the corruption and injustices Dr Mahathir left in his trail — and we will build a democratic and just Malaysia.”

Moments earlier, the judges had delivered a preposterous verdict, unanimously rejecting Anwar’s final appeal against a fifteen-year prison sentence for corruption and sexual misconduct. It was a verdict that ignored emphatic denials by the supposed victims of abuse, a police report dismissing the allegations as baseless and the discrediting of critical forensic evidence. It was roundly condemned by legal experts around the world and by foreign governments, including in Washington.

Anwar’s defiant words seemed more pitiful than prescient in that moment. It would take more than twenty years for his promised day of justice to return. His appointment this week as Malaysia’s tenth prime minister after the mid-November general election closes the circle on a titanic struggle between the man once called the father of Malaysian politics and his wayward son that has consumed the country’s politics for a generation.

In 1997, Mahathir Mohamad had been Malaysia’s prime minister for sixteen years. Anwar Ibrahim was the deputy he had recruited, groomed and anointed as his successor. Their partnership fell apart spectacularly in the aftermath of the 1997 Asian financial crisis.

As finance minister, Anwar had committed to austerity measures suggested by the International Monetary Fund to rescue the battered Malaysian economy. But Mahathir, who claimed the cause of the problem was a conspiracy by global financiers, backed a slew of lavish bailouts for failing Malaysian corporations, not least his son’s shipping company. Anwar also angered Mahathir by beginning to tackle widespread corruption in the government and — as many Malaysians cheered the fall of Indonesia’s Suharto regime in May 1998 — embracing political and social reform.

Mahathir abruptly sacked Anwar that September. Three days later, police used tear gas and water cannons to break up the biggest protest rally in Malaysia’s history as more than 50,000 people took to the streets of Kuala Lumpur in support of Anwar. Malaysia’s reformasi movement was born.

That night, Anwar was arrested and detained. A week later he appeared in court with a black eye, the result of a beating in prison by police inspector-general Rahim Noor. (Rahim was later jailed for two months for the assault.) Anwar was eventually sentenced to six years’ jail for supposedly abusing his ministerial position by directing police special branch officers to pressure witnesses to retract allegations he’d had sex with his family’s driver and an illicit affair with the wife of his private secretary. (Both homosexuality and adultery are criminal offences in Malaysia.) A subsequent trial saw him also convicted for the alleged sexual offences themselves.

The Federal Court decision to uphold those verdicts in 2002 came despite evidence that Anwar’s driver had three times denied having sex with his employer and compelling evidence that police had threatened witnesses and manipulated evidence. The appeal judges also ignored an admission by police special branch chief Mohamad Said bin Awang that in 1997 — a year before Anwar’s sacking — he had sent a report to Mahathir dismissing the allegations of sexual misconduct as a whispered smear campaign.

Mahathir’s confected crucifixion of Anwar would do much more than brutally derail the career of a charismatic leader who had promised, since his earliest days as a student activist, to build a cleaner, fairer and more racially egalitarian Malaysia. It paved the way for even greater levels of cronyism and corruption within the ruling Malay elite, culminating in the kleptocracy of Najib Razak’s nine-year prime ministership from 2009 that presaged a twelve-year prison sentence. It also robbed the country, Southeast Asia and the world of a democratic and West-friendly Muslim leader committed to building a better order.

The day after emerging as leader of the most successful coalition in Malaysia’s latest general election, the now seventy-five-year-old Anwar told reporters gathered outside his home, “This you need to learn from Anwar Ibrahim — patience, wait a long time, patience.” Patience indeed. And extraordinary determination.

Anwar would spend a total of almost ten years in prison and be double-crossed a second time by Mahathir Mohamad before achieving what he believed was his destiny, and what his legions of devoted supporters among younger Malays and the country’s often marginalised Indian and Chinese minorities had long hoped for.

Anwar’s first years of imprisonment ended in late 2004, a year after Mahathir stood down as prime minister, after Malaysia’s Supreme Court overturned his conviction for sodomy. On his release, Anwar was still barred from politics but resumed de facto leadership of a resurgent opposition that went on to make a strong showing in the 2008 general election. The United Malays National Organisation, which had dominated Malaysian politics since independence in 1957, lost fifty-eight of its seats while the People’s Alliance, led by Anwar’s wife Wan Azizah, increased its numbers by sixty-one. After his ban ended, Anwar was returned to parliament in a by-election in April 2008 and resumed formal leadership of the opposition.

During the 2013 general election campaign Anwar drew massive and jubilant crowds to his rallies across the country. As I travelled with him on part of the journey, he spoke eloquently about his determination to change Malaysian politics. “The last fifteen years have certainly changed me,” he said. “You talk about freedom or reform. It is not the same when you understand what it is to be denied your freedom. My passion for justice is far more pronounced now… I can’t allow this to continue.”

His alliance would win the popular vote in that election with 50.9 per cent against 47.4 per cent for the ruling coalition, but was again thwarted by an entrenched gerrymander and allegations of widespread electoral fraud.

Nationwide protests led by Anwar rattled the government. Early the following year, as he was poised to contest and capture the premiership of Selangor State, Najib Razak dusted off the old Mahathir political playbook. On 7 March 2014, the Court of Appeal overturned Anwar’s earlier acquittal, unanimously declaring the High Court had failed to “critically evaluate” the evidence submitted by a government chemist. It rushed through a fresh sentence of five years’ imprisonment, once more disqualifying Anwar from political office. A year later, the Federal Court upheld the decision and he was sent back to jail.

Three years later, the man primarily responsible for Anwar’s torment came in search of a breathtaking favour. Now at war with the rest of the UMNO old guard, Mahathir Mohamed cut a deal with Anwar to unite their followers in a new coalition to contest the 2018 general election. Under the agreement, Mahathir would return to the prime ministership but would hand over to Anwar after an interim period.

Mahathir’s strategy worked. The new alliance led by Anwar’s Pakatan Harapan (Alliance of Hope) — its leader still behind bars — won a simple majority and Najib’s Barisan Nasional coalition was relegated to opposition. After being sworn in as prime minister, Mahathir engineered a royal pardon for Anwar. But it surprised few — including most likely Anwar himself — when Mahathir stalled and then reneged on his promise to surrender the leadership. Their coalition collapsed after twenty-two months.

If Anwar’s path to power has been strewn with landmines, the road ahead may be similarly treacherous. While his reformist Pakatan Harapan coalition won eighty-two seats in this general election to emerge as the largest political grouping, he remains well short of a majority in the 222-seat national parliament. After days of wrangling in which the rival conservative Malay alliance Perikatan Nasional, with seventy-three seats, claimed it too was poised to forge a majority with minor parties, Malaysia’s King Sultan Abdullah stepped in and appointed Anwar as prime minister.

While incumbency gives Anwar a clear advantage, and he is a highly skilled negotiator, the deep and often bitter divisions in Malaysian politics mean success is not guaranteed when the numbers are finally put to the test in the parliamentary vote of confidence the new leader has promised to call on 19 December. Not least of his challenges will be the strong electoral showing of PAS, the Malaysian Islamic Party, which is opposed to the development of a more pluralist society, an essential element of Anwar’s vision for the country.

It is more than poetic justice that Anwar’s final ascent to the top of Malaysian politics has coincided with the end of Mahathir Mohamad’s political career. The general election was a humiliating repudiation of the man who had been an irrepressible force in the country’s politics for more than half a century, including serving a total of twenty-two years as prime minister.

The ninety-seven-year-old Mahathir — who had boldly proposed himself for a third term as leader and boasted to journalists that he had a good chance of winning — came fourth in a five-way contest in his electorate on the resort island of Langkawi, this time running under the banner of his own Pejuang Party. In his first election defeat in fifty-three years in politics, Mahathir also lost his candidate’s deposit after failing to secure a minimum of 12.5 per cent of the vote. •

Mark Baker is publisher of Inside Story. He reported Anwar’s trials and jailing as Asia Editor of the Age.