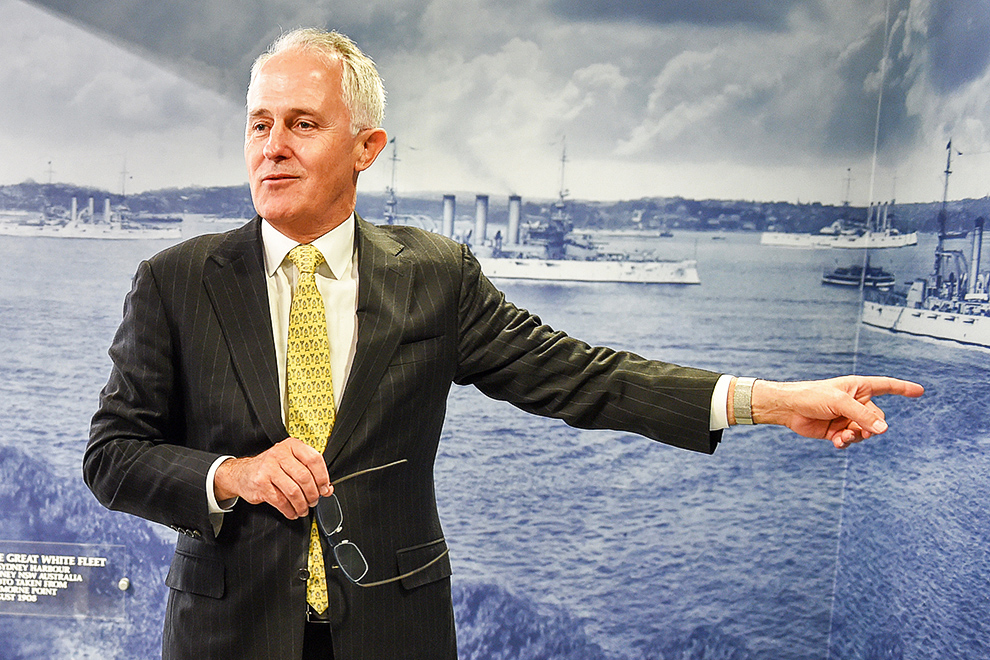 Times change: prime minister Malcolm Turnbull in the Anzus hall at the Pentagon in January this year. Clydell Kinchen/US Department of Defense

John Hewson wanted to run a totally positive election campaign. But when he put it to a vote of his shadow cabinet, he found himself the lone supporter. The Liberal Party went ahead with negative television advertisements and Hewson spent the last weeks of the 1993 campaign at rowdy rallies, spruiking his Fightback! policies. In the dying days of the campaign, amid a light shower of squishy foodstuffs, Hewson had “the catch of the series”: an egg on the fly, just before it could splatter all over his white shirt.

Hewson saved the egg but lost the election, and the Coalition joined the Labor Party in its less-is-more approach to campaigning. Policy as political communication, which had broadly defined the Liberal Party’s approach between 1985 and 1993, was largely abandoned by both sides. That kind of detail wasn’t the way to win elections; it exposed oppositions needlessly to the scrutiny of the media and the vast resources of government.

Despite the rise of small-target strategies, though, oppositions still like to boast that they have “the most comprehensive policy plan in living memory,” often with little evidence and a lot of wilful ignorance of their own party’s history. Labor is the latest to make this claim, but with more justification than any opposition since 1993.

Why has Labor abandoned the small-target orthodoxy? The reasons lie in the changing incentives at play in our politics.

It is increasingly obvious to parties and voters that the policy-making orthodoxies of the past forty years are eroding. Just as mid-1970s stagflation underscored the fact that postwar policies had become increasingly ineffectual, recent near-zero interest rates across the globe have demonstrated the limits of a near-universal commitment to market-oriented policies.

This phenomenon is not new. Over decades, policy paradigms erode under the weight of inconsistencies and failed policy experiments. As old ways of doing things appear increasingly ineffectual it is only natural that new ideas are more likely to be of interest to voters. Australia is at such a moment now.

From the early 2000s until the global financial crisis, politics was largely about managing the windfall of a once-in-a-century minerals boom. Political decisions focused on distributing excess wealth and calibrating policies to make sure there were “no losers.” In the main, governments didn’t need to take on established interest groups or, worse still, challenge their own party base. This was the politics of managing a comfortable status quo and it demanded a certain set of political skills.

As the old orthodoxies broke down, both parties struggled to recalibrate. Labor’s troubles in government stemmed from an inability to exploit the power of incumbency to prosecute its policy agenda. The Coalition’s frontbench might have been more experienced, but many senior members of the Abbott–Turnbull governments had cut their teeth in the prosperous years after the Howard government had undertaken the majority of its difficult reforms.

Arguably, Labor appears a little more comfortable as it gropes towards a new framework. In government it made a case, often poorly, for paid parental leave, a price on carbon, needs-based school funding, the National Disability Insurance Scheme, the National Broadband Network and the need to embrace the “Asian century.” These are the politics of recalibrating the functions of the state, the relationship between citizens, economy and environment, and relations between women and men, taking account of the unstoppable impact of telecommunications technologies on our lives and work practices.

By contrast, the Coalition won the 2013 election by promising sound financial management, a return to the “relaxed and comfortable” years of the Howard era, and a reform agenda to be presented in 2016. Yet, as some commentators have noted, its vision for the future is confined to a $50 billion tax reduction for business and a pledge to maintain stability. This isn’t surprising; recalibrating policies at this moment is in many ways more difficult for the Coalition than for Labor. It is faced with the retreat of the neoliberal tide and growing advocacy from global financial institutions for modest income and wealth redistribution and state intervention. After the Coalition’s near-victory in 2010, the necessary internal debate was largely put aside for the sake of party discipline.

In this sense, is it any wonder that Labor has chosen to put policy ahead of arguing for its economic credentials and management of the status quo? It’s difficult for Labor to out-compete the Liberal Party in perceptions of economic competence. As the inheritors of the Australian conservative tradition, the Liberals are often (but by no means always) satisfied with simply keeping the “irresponsible” Labor Party away from our national treasure.

Indeed, Labor has often invested in policy and ideas as a means to rebuild credibility. Gough Whitlam used this approach in the late 1960s and early 1970s. Bill Hayden used policy as a means of demonstrating competence and responsibility after the governance scandals of the Whitlam government. Neither were quick fixes, and Labor spent several terms advocating its alternative agenda without winning elections. Realistically, though, it’s hard to see what alternative Bill Shorten has – particularly when there is a growing sense that Australia is running out of coasting time.

Another factor contributing to Labor’s focus on policy is its personnel. With an economic team dominated by Chris Bowen and Andrew Leigh, and Jenny Macklin holding the big-spending portfolio of social services, Labor has policy wonks in key positions.

Other structural factors have also made the ground more fertile for Labor’s bigger-target approach. The digital media landscape is maturing. Both parties learned quickly to use the twenty-four-hour media cycle to tell negative stories, and to use insurgent tactics against incumbents. Yet government and opposition have frequently failed to prosecute a positive policy agenda that requires longer conversations and engagement with voters.

In this election, the parties appear to have made some headway in targeting different messages to specific audiences rather than relying overwhelmingly on TV advertising and endlessly repeating a few key messages for voters in marginal seats. The focus of elections may still be on the marginals, but parties have a use for so-called “rational voters” (those interested in policy details): they target them with factual information in the expectation that those voters share it with their friends on Facebook and around the weekend barbecue.

The speed of the news cycle and the rise of social media are eroding the capacity of leaders to centralise and control messages. Authenticity is increasingly important and the technology exists to allow MPs to communicate directly with their constituents. In these circumstances, it is unrealistic to believe that simply repeating talking points will be enough to win over voters who are increasingly considering alternative voting options. With any luck, we have witnessed the high-water mark of centralised control of policy-making and political communication in one person’s office.

Now that the campaign has made a distinctly negative turn, it remains to be seen if Labor can convince a majority of voters to return it after a single term in opposition. Although it’s unlikely we will ever see the likes of Fightback! again, the incentives for parties to provide details of their alternative visions for the future are increasing. Policy nerds, prepare for some fat years. •

Marija Taflaga is a PhD Candidate in the School of Political Science and International Relations at the Australian National University.

Farewell to the spirit of 1967

The rise of “deficit metrics” and the federal government’s retreat from Indigenous affairs have reversed the direction set by the historic 1967 referendum, writes Patrick Sullivan

“I always describe it as paradise“: a sign outside the former Aboriginal mission at Erambie, near Cowra. Laurie Bamblett 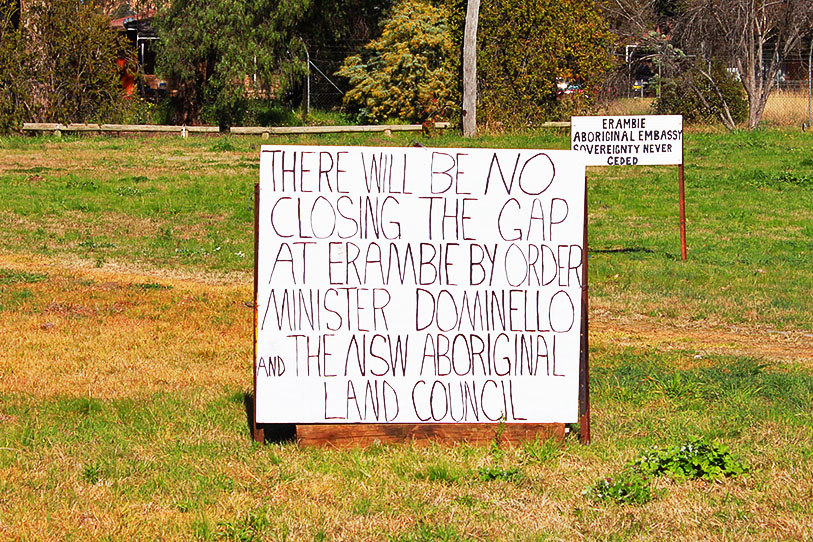 “I always describe it as paradise“: a sign outside the former Aboriginal mission at Erambie, near Cowra. Laurie Bamblett