Back from the fiscal cliff – but now what?

Can Barack Obama turn the chaos in Republican ranks to the advantage of the Democrats, asks Lesley Russell 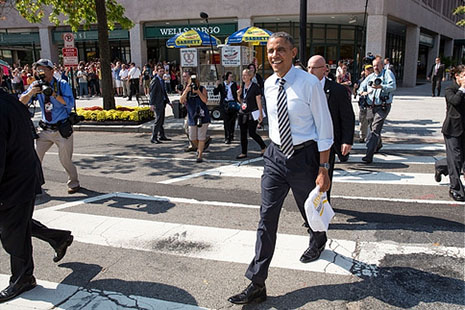 No fall in popularity: Barack Obama goes out for lunch during the shutdown.
cmccain202dc/ Flickr

BARACK Obama’s success in staring down Congressional Republicans and winning a short-term funding reprieve raises two key issues. Can the president and Congress reach some long-term agreements on the budget? And can the president use his victory to revitalise his second term and win back the House of Representatives for the Democrats in 2014?

The Republicans have taken the hit for the chaos that extended well beyond Washington DC and the 800,000 federal workers who were furloughed. Research and clinical trials were interrupted, food programs to needy children suspended, and the closure of national parks and tourism sites played havoc with tourists and the businesses that depend on them. By some estimates, the shutdown cost taxpayers US$24 billion – a major economic hiccup that achieved nothing but rancour.

The GOP’s favourability ratings in Gallup polling have fallen to 28 per cent, the lowest recorded for a political party since records began in 1992. Rush Limbaugh, Karl Rove and other high-profile conservatives have denigrated Republican tactics. While the shutdown was arguably more about ideology than tactics, even the ideology was fuzzy. Conservative representative Marlin Stutzman (R-Indiana) summed it up when he said, “We’re not going to be disrespected. We have to get something out of this. And I don’t know what that even is.”

The true source of Washington dysfunction lies with Tea Party lawmakers and their ability to hold the rest of the Republicans hostage to their illogical demands. Around 49 per cent of Americans now view the Tea Party unfavourably, according to Pew Research. But Tea Party members are defiant, with negotiation seen as the soft option. Lost in delusion, they have concluded that “moderate” Republicans such as Senate leader Mitch McConnell caused the shutdown defeat and must be voted out of office.

The Pew poll shows that Senator Ted Cruz’s popularity has soared among Tea Partiers, rising from 47 per cent in July to 74 per cent today. This highlights one of the real conundrums facing the Republicans: the fact that behaviour disapproved of by most Americans is often seen favourably by the party’s conservative base. By contrast, while President Obama’s approval rating is low at 44 per cent, it is the same now as it was just before the shutdown. By a twenty-four-point margin (53–29), voters blame Republicans, not the president, for the shutdown.

Already it seems that Republicans, in their determination to avenge their humiliating loss, have taken their eye off the ball. While their focus should be on the work of the Budget conference committee, headed by Republican representative Paul Ryan and Democrat senator Patty Murray, such hard, bipartisan work to find long-term budget solutions holds no interest for most conservatives.

It’s not clear what their strategy will be in mid January when the government runs out of funds again, or in mid February when the debt limit will need to be raised once more. Will the GOP risk another government shutdown and a debt-ceiling fight to try again to extract concessions on Obamacare and other social programs? It could be a dangerous tactic in a mid-term election year, with most Americans tired of the esoteric battles.

For now, Republican lawmakers have turned their attention to the problems with the health insurance exchanges, a key element in expanding health insurance cover under Obamacare. Destroying Obamacare remains, after all, their signature policy idea.

Many of the exchanges – specifically those few built and operated by individual states – have worked well from the very beginning. But because many Republican state governors refused to set them up, the federal government is providing a central exchange for thirty-six states. The good news is that the HealthCare.gov website has been inundated with people looking to purchase affordable health cover; the bad news is that the site has been unable to cope with the numbers – an estimated 14.6 million visitors in the first ten days – and there are other glitches in the $400 million system.

The administration has not been very forthcoming about how and when the problems will be fixed, or about how many people managed to purchase health insurance. At an event this week at the White House, the president conceded there was no way to sugarcoat the issues. He reiterated that the Affordable Care Act should not be perceived solely as a website, although easily enrolling the uninsured is a central element of the law, and he defended the roll-out problems. “We did not wage this long and contentious battle just around a website,” he said. “We waged this battle to make sure that millions of Americans in the wealthiest nation on Earth finally have the same chance to get the same security of affordable quality healthcare as anybody else.”

Now the race is on to fix the problems before they begin to discourage less motivated purchasers – the young and healthy people essential to keep down premiums in the exchanges – and in order to meet key deadlines. Uninsured Americans have until 14 December to enrol for plans that start on 1 January 2014, and those not enrolled by 31 March risk fines under the Obamacare mandate.

These problems also undermine Obama’s argument that government is capable of working effectively to improve Americans’ lives – an issue at the very heart of the political divide in America.

House speaker John Boehner is back in attack-dog mode, claiming that “the House’s oversight of this failure is just beginning” and that “Congress is going to get to the bottom of this debacle.” The new target is the health and human services secretary, Kathleen Sebelius, whom the Republicans are calling on to resign. She has declined to appear in front of a House Energy and Commerce Committee hearing titled “Implementation Failures: Didn’t Know or Didn’t Disclose?” – one of at least three House committees expected to hold hearings as part of a renewed Republican attack on Obamacare.

What this approach seems to signal is the Republicans’ acknowledgement that they will not be able to defund or declaw the healthcare reform law through budget negotiations. But once again the GOP is in danger of running counter to majority public opinion, which is slowly but surely coming around – perhaps more for what Obamacare offers than for its philosophical underpinnings.

According to a recent CNN/ORC International survey, 53 per cent of voters either support Obamacare or say it doesn’t go far enough in reforming healthcare. That aligns with the latest ABC/Washington Post poll, which finds that 46 per cent support the law and 54 per cent either oppose it or are unsure of their feelings about it. The second bloc breaks down into 33 per cent who want to repeal Obamacare and 20 per cent who oppose the law but want it to go ahead. That means a total of 66 per cent either support the law or oppose it but want it to go forward.

ALL in all, 2013 has been a difficult and not very productive year for the Obama administration. Little progress has been made on the priorities the president laid out in his State of the Union address in February: a new jobs plan; infrastructure investments; an increase in the federal minimum wage; a guarantee of quality preschool education for every child; and new background checks for gun purchases.

In his speech after the shutdown and debt ceiling crisis, Obama declared that Washington “has to change” and appealed for greater cooperation between the political parties. He indicated that he wants to move not just on the federal budget but also on issues such as immigration reform and a farm bill. (Interestingly, he did not bring up gun control or climate change.) But there is little optimism that any of these issues will come up for debate in the short term; at this stage, a debate on immigration reform could be yet another political disaster for all sides.

The hope now is that the midterm elections in November 2014 could see the Democrats take back the House of Representatives. Historically, the party in charge of the White House loses roughly ten to fourteen seats in the House in a midterm election, but in the wake of the government shutdown a majority of voters see GOP control of the House as a bad thing for the country. The CNN/ORC International survey also indicated that three-quarters of Americans say that most GOP members of Congress don’t deserve to be re-elected because their policies are too extreme. Fifty per cent of registered voters questioned said they would vote for the Democrat in their district, with just 42 per cent backing the Republican. That eight-point Democratic margin is the same as in a recent NBC News/Wall Street Journal survey and close to the nine-point advantage for the Democrats in a recent Quinnipiac University poll.

But with more than a year to go until the midterm elections, there’s plenty of time for these numbers to change. Voters’ memories are short, new issues will arise, and the state of the economy will be decisive. Another factor that gives the GOP solace heading into 2014 is that after redistricting, most Republican districts are safer today than they were in 2010. This could mean that the 2014 House races would see the election of even more conservative candidates than those currently serving.

Recently big business has indicated that it will act to support pro-business Republicans in primaries against Tea Party Republicans and has been outspoken about the Tea Party’s lack of support for their leaders McConnell and Boehner. There is dissatisfaction that the GOP is ignoring the business community on issues like immigration, jobs and infrastructure, and Democrat leaders have been quick to remind business that it was Republicans who shut down the government and threatened a sovereign debt crisis. Where big business chooses to put its political campaign donations in the year ahead will be critical.

The Democrats need a swing of only seventeen seats in the 435-seat House. For the first time in the 2014 House election cycle, recent analysis by the nonpartisan Cook Political Report puts more Republican seats “in play” than the seventeen Democrats would need to win control. The mathematics is difficult but not impossible. It may all hinge on whether the Republicans force another government shutdown early next year. •

Lesley Russell is a Research Associate at the Menzies Centre for Health Policy at the University of Sydney. She was Inside Story’s Washington correspondent in 2008–12.

Charmian Clift’s Peel Me a Lotus has inspired Australian women travel writers for over half a century, but the result has been a quite different kind of writing, says Susan Carson 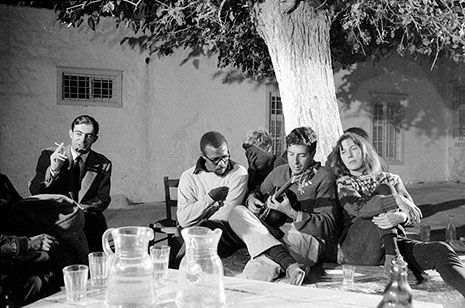