Before it was time

A young Western Australian catches a glimpse of Gough in 1969 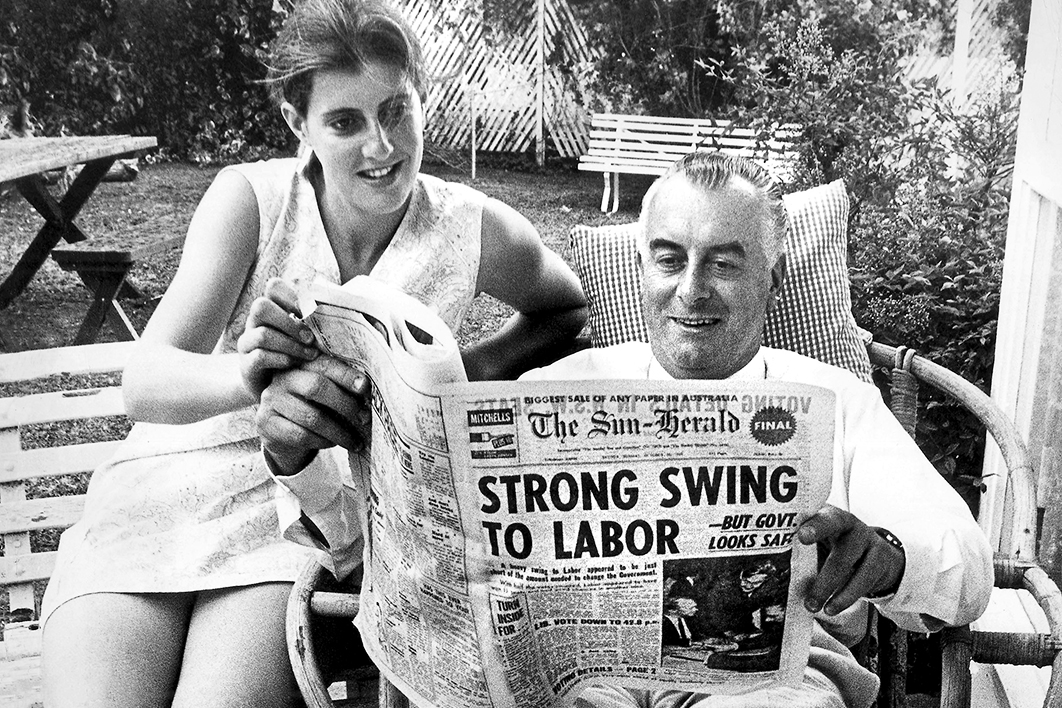 The reward: Gough Whitlam and his daughter Catherine in Cabramatta after Labor’s strong showing at the national election later in 1969. George Lipman/Sydney Morning Herald

The fiftieth anniversary of the election of the Whitlam government prompts me to recall my first sighting of Gough Whitlam in action. Seeing the Labor leader speak during the April 1969 Curtin by-election campaign didn’t require much effort on my part: the event was at the Subiaco Civic Centre, a five-minute stroll from my home on what was probably a balmy Perth autumn’s night.

The by-election had been brought on by the resignation of the sitting Liberal member, external affairs minister Paul Hasluck, to become governor-general. At any other time, Labor would probably not have bothered to run in this very safe Liberal seat. Indeed, Labor had not run a candidate for Curtin even in the 1963 general election.

Such a cop-out would have been anathema to Whitlam. He had campaigned impressively in two by-elections in 1967, his first year of leadership, and regarded such events as opportunities to spread the party message to a citizenry that had not elected a federal Labor government since 1946.

Nineteen sixty-nine was also a federal election year. Having narrowly won a self-inflicted caucus ballot to reassert his leadership the previous year, Whitlam needed to perform strongly and pull off a decent swing at the election. While a Labor victory was almost in the realm of fantasy, winning just a few seats here and there was unlikely to cut it: too many enemies in his own party were ready to use a weak result as a good reason to turn up the heat on Whitlam.

Australia’s involvement in the Vietnam war, and the use of conscripts to fight there, remained major issues, and while it is almost certain that Whitlam referred to them that night in 1969, my only abiding memory of his address was his criticism of the inequities and inefficiencies of Australia’s federal system. What especially stuck in my mind was his scathing description of how different state governments ordered different railway rolling stock from different countries when some coordination and cooperation would make more economic and practical sense. It didn’t exactly bring the (sparsely populated) house down, but it wasn’t without impact either.

Whitlam is associated so greatly with emotion and passion (especially after 1975) it is easy to forget that in opposition he spent much more time criticising the government for its inefficiency and ineptitude than decrying its moral failings (although sometimes it was both) — or that his enduring critique of Australian federalism’s shortcomings was something of a magnificent obsession. Even on conscription, his criticism was often as much about its inherent inefficiency (a view traditionally shared by many in the military) as about its violation of liberty and its cruel impact on those whose lives it took or damaged beyond repair.

What of the Curtin by-election? The seat was retained by the Liberals’ Vic Garland, who would go on to achieve ministerial office in the governments of William McMahon and Malcolm Fraser. But Labor achieved an estimated two-party-preferred swing of 7.9 per cent, closely matching the national swing of 7.1 per cent that Whitlam secured later that year in the general election.

That result set the stage for victory in 1972, although to regard it as inevitable is to ignore the risks Whitlam had to take, the best examples being the decision to launch a federal intervention into Labor’s left-controlled Victorian branch in 1970 and his visit to the People’s Republic of China in 1971, when Australia still recognised Taiwan as the real China.

The “inevitable” tag also ignores the modest nine-seat majority Labor achieved in 1972: the win was no landslide, and it is near certain that only Whitlam within federal Labor’s parliamentary ranks could have brought the conservative domination to an end.

That night in April 1969, I walked home reasonably impressed. But my impression would have been of little use to Whitlam: the voting age was twenty-one and I was too young to vote in 1969 — and indeed, even in 1972. •

Paul Rodan writes on politics for Inside Story.