Between the devil and the deep blue sea

The weekend’s boat tragedy makes the need for regional cooperation more urgent than ever, writes Savitri Taylor. The good news is that real progress has already been made 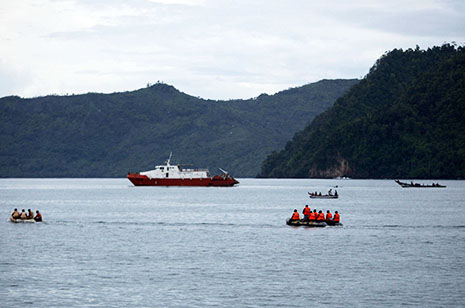 Members of a search and rescue team looking for survivors of the sinking boat off the Indonesian coast on 19 December. Juni Kriswanto/AFP

DESPITE the ordeal after their boat sank off the coast of Java on Saturday, some of the surviving asylum seekers have told journalists that they will board another boat – most likely just as overcrowded and unseaworthy as the one that sank – and try again to reach Australia. Why would they take this kind of risk yet again?

Between 2007 and 2009, Sandra Gifford and I led a research project that included interviews with asylum seekers and refugees living in Indonesia, the last country of departure for most people arriving here by boat. We discovered that asylum seekers and refugees don’t necessarily want to make Australia their home. They just want to have a home: a place where they can live in safety, support themselves with dignity, give their children a future through education, and belong. The knowledge that they had a realistic prospect of being resettled in a country that could fulfil these needs would have been enough to enable them to bear short-term insecurity. In fact, if these basic human needs could be fulfilled in Indonesia, they would have been happy to settle there. Unfortunately, neither a home in its true meaning nor the hope of one in the future can be found in Indonesia, or in most other countries in our region. Australia is one of the few exceptions to that rule.

The survivors of Saturday’s tragedy are nationals of Afghanistan and Iran. In all likelihood, they are refugees within the definition set out in the Refugee Convention and its Protocol. Under existing Australian law, if they do eventually manage to make it here by boat they will be able to seek and receive the protection Australia has promised under those treaties. Because the prospect of receiving protection in Australia is seen as a major reason why asylum seekers make the risky sea voyage, the federal government and the opposition would have us believe that the responsible thing to do is to persuade these people that they will not be given protection here.

The government’s preferred means of sending this deterrent message is the arrangement it struck with the Malaysian government on 25 July, which provided for the transfer to Malaysia of up to 800 people arriving irregularly in Australia by boat. Transferees would be given the opportunity to have asylum claims considered by the United Nations High Commissioner for Refugees, or UNHCR, in Malaysia and, if found to be refugees, would have access to resettlement “pursuant to UNHCR’s normal processes.” In keeping with the “stop the boats” rationale, the two governments agreed to ensure that transferees would not receive any processing advantage over other asylum seekers and refugees in Malaysia.

According to the latest figures, 95,300 refugees and asylum seekers were registered with UNHCR in Malaysia at the end of October 2011. The vast majority of all refugees and asylum seekers in Malaysia are members of Burmese minority groups and are therefore unlikely to have the option of repatriating at any time in the foreseeable future. Equally unlikely is repatriation of members of three other sizeable refugee groups in Malaysia: Afghans, Iraqis and Somalis. Because the Malaysian government refuses to contemplate local integration as a durable solution for the refugees it hosts, resettlement is the only option for most. Even at a projected rate of between 9000 and 10,000 resettlement departures per year from Malaysia, though, transferees will typically face a wait of many years for resettlement.

It may well be the case that a credible threat of being consigned to a hellish limbo in Malaysia would lead to a significant reduction of irregular boat arrivals to Australia. But that hypothesis cannot be tested unless and until the government manages to procure passage of the Migration Legislation Amendment (Offshore Processing and Other Measures) Bill 2011, overturning the High Court decision that currently prevents the implementation of the Malaysian Arrangement.

What the Malaysian Arrangement – or the Pacific Solution, to which the Coalition wishes to return, or any other extraterritorial processing arrangement – cannot resolve is the insecurity in the countries asylum seekers flee from and in most of the countries they flee through. For as long as this insecurity remains, any asylum seekers we manage to dissuade from travelling by boat to Australia will simply be diverted into equally irregular, equally risky routes to other more distant places where protection can still be found, or they will suffer and die in the “transit” countries in which we have ensured they remain trapped.

It is beyond the capacity of Australia or any other single country to solve that underlying problem. What is needed is regional cooperation or perhaps even global cooperation.

The good news is that there has been real progress made towards refugee protection cooperation in our region through an intergovernmental process called the Bali Process. As explained in a previous article, the Final Co-Chairs’ Statement of the Fourth Bali Regional Ministerial Conference, adopted on 30 March this year, sets out a non-binding Regional Cooperation Framework, or RCF, covering four main areas. First, people-smuggling syndicates should be eliminated and governments should promote and support opportunities for orderly migration. Second, wherever possible, asylum seekers should have access to consistent processes for assessing their claims, whether through common arrangements across the region or through regional assessment arrangements. Third, people found to be refugees should be offered durable solutions. Fourth, people found not to be in need of protection should be returned home, preferably on a voluntary basis, in safety and with dignity. The statement also gives regional officials the task of implementing the RCF “in conjunction with UNHCR and IOM” – the International Organization for Migration – “as appropriate through bilateral and multilateral arrangements.” Although the RCF is primarily a framework for border control cooperation, the incorporation of protection-related principles into the framework was a step forward for our region in which very few states have become parties to the Refugee Convention or Protocol.

Both the Australian and the Malaysian governments portrayed the Malaysian Arrangement as a practical implementation of the RCF. But the plan disregarded the protection-related principles of the RCF, which did not encourage the hope that the RCF would lead to improved refugee protection in the region. Notwithstanding the bad precedent set by the Malaysian Arrangement, though, it may still be possible to improve refugee protection in the region by building on the RCF. At a meeting in June, the Bali Process Steering Group considered a discussion note prepared by UNHCR and decided to recommend the creation of a Regional Support Office, located somewhere in South East Asia, operating under the direction of Australia and Indonesia in consultation with UNHCR and IOM. The purpose of the proposed office is “to facilitate the operationalisation of the [RCF].” The steering group also decided to recommend the creation of a working group “to further discuss and provide advice on the operationalisation of the [RCF] including the pilot-testing of joint activities in areas such as: processing and case management; resettlement and burden sharing; and return to countries of origin with respect to selected caseloads.”

In October, senior officials from the Bali Process countries decided to proceed with the establishment of a Regional Support Office, subject to the agreement of the process’s co-chair ministers. The officials also welcomed two proposals from Australia for projects that the office could take on: “a regional data harmonisation initiative” to “promote further harmonisation of information management between States and international organisations with a view to enhancing data collection, supporting further analysis and reporting, and facilitating information sharing and dialogue,” and a “voluntary repatriation capacity building and support project.” Unfortunately, neither of the Australian proposals necessarily have much to do with refugee protection. On the other hand, if UNHCR is able to nudge the Regional Support Office towards projects designed to put the refugee protection elements of the RCF into operation, then the region may yet start moving in the right direction. •

With the right leadership Burma could undoubtedly use its position between China and India to its advantage, writes Nicholas Farrelly 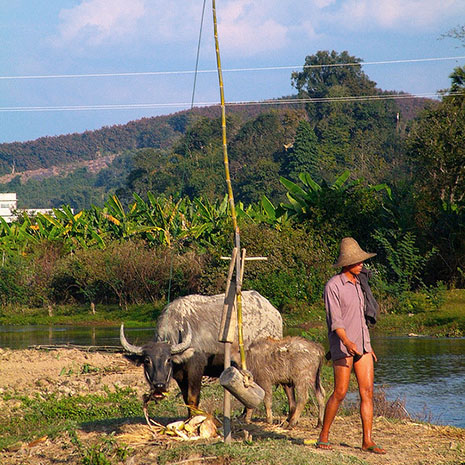