Beyond the political duopoly

Election 2019 | If the banks can change, imagine the scope for cultural reform in politics 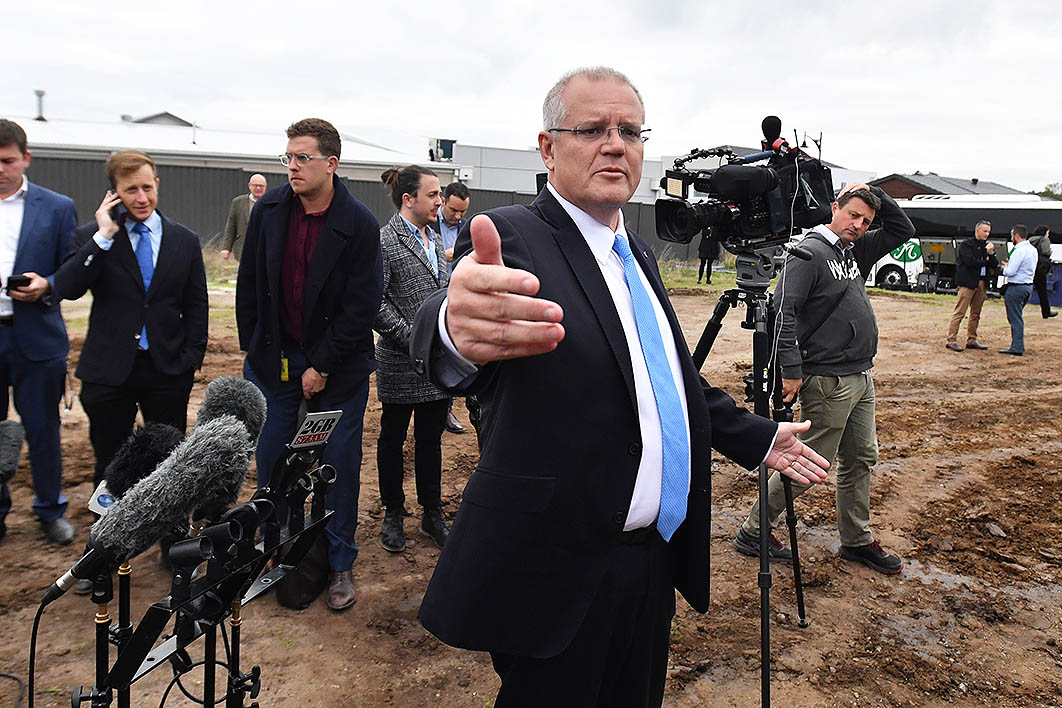 Election campaigns hide at least as much as they reveal. Voters who are paying attention could be left with the impression, for example, that Scott Morrison and Bill Shorten are warm and cuddly personalities.

Well, perhaps on their good days. All successful politicians have some ability to charm voters. But both these leaders are highly ambitious, driven people who have clawed their way to the top over the odd dead body. As former NSW premier Neville Wran once put it, in a comment applicable to all political parties: “You get nothing in the Labor Party without getting up to your armpits in blood and shit.” Morrison, as a former NSW director of the Liberal Party, and Shorten, as a factional numbers man, have both done their share of political bloodletting.

Both are believers in former Labor powerbroker Graham Richardson’s “whatever it takes” brand of politics. Morrison cemented his reputation within the dominant right wing of the Liberal Party with his brutal approach to refugee policy as immigration spokesman in opposition and as immigration minister in government. In 2011, he even complained about the Labor government’s decision to pay the airfares of relatives to attend the funerals of asylum seekers who had drowned off Christmas Island. Shorten twice dropped any pretence of loyalty to the leader by switching his support, and that of his followers, from Kevin Rudd to Julia Gillard and, later, back to Rudd.

The same applies to those still trying to claw their way up. Energy minister Angus Taylor holds the provincial NSW seat of Hume with a margin of 10 per cent, but that doesn’t stop him playing his politics hard. He has made several threats of legal action over matters that should be part of legitimate political debate. One concerned media coverage of a company that was registered in the Cayman Islands and of which, according to his official biography on the parliamentary website, he was co-founder and director before he entered parliament. This was the parent company of the one that benefited from an $80 million water purchase by the federal government, although by then Taylor says he had long severed ties. This week, he or his office tried to stop the distribution of a leaflet critical of his record, particularly on climate change, by claiming a technical breach of the Electoral Act.

Then there are the big issues that neither side wants to talk about. The Reserve Bank’s latest economic forecasts suggest a slowing economy, casting doubt on both sides’ promises of budget surpluses for this and following years. It brings to mind the projected budget deficit of $9.6 billion — huge in those days — with which Treasury confronted the Hawke government straight after it came to office in 1983, making the campaign promises of both sides unaffordable. There had been a hint during the campaign that the budget might blow out, but it didn’t suit either side to bring it into the debate, apart from a fleeting reference by Hawke just before polling day.

As for the impact of the current trade war between the United States and China, which has the potential to blow up the world economy, let alone the implications of China’s rapid rise to superpower status, forget it: the election campaign is fully occupied with weightier matters, such as shovelling money into marginal electorates.

At least the majority of adult Australians get to have their say in elections, discouraging parties from merely pandering to their base. The virtue of compulsory voting is that it forces people to exercise their right in a democracy.

True, that seems a strange argument — compelling people to exercise a right? And it is not strictly true: the only real compulsion is to get your name marked off the electoral roll and be given ballot papers.

After that, in the privacy of the polling booth, you can do what you like, including voting informal and making rude comments on your ballot paper, as some do. Though not that many: the informal vote in the last federal election was 5.1 per cent for the House of Representatives and 3.9 per cent for the Senate, suggesting that most people take their obligation seriously. But another almost 14 per cent of eligible voters didn’t bother to vote, whether by not enrolling, by not getting around to voting or by deliberately deciding not to.

Nevertheless, a valid vote of around 80 per cent is a significant statement about participation in a democracy. Compulsory voting means more people pay more attention to elections than otherwise, though how many is a moot point. It is no more a burden or an infringement of rights than the requirement to pay taxes or send children to school. It spares parties and candidates from the expensive and time-consuming chore of trying to persuade people to vote. And it generally means that more than just a minority of adults decide who governs them, unlike in the United States.

But compulsory voting does have its weaknesses. It is not compulsory to take an interest in politics, and an increasing number of people do not. In last week’s Essential poll, conducted twelve days before the election, 16 per cent of voters said they had not been paying any attention to the election, 29 per cent that they had been paying little attention, 36 per cent some attention and 19 per cent a lot. Those figures may change as polling day draws closer but perhaps not by much, judging by past elections.

The biggest factor in Labor’s favour is the sentiment that it’s time for a change. There is no shortage of factors to support this feeling: Liberal leadership instability; infighting over policy and in particular the inability to reach a coherent position on climate change and energy; the one-man show that has been the Liberal campaign, with many of Scott Morrison’s ministers apparently in hiding; the Coalition’s lack of a comprehensive third-term agenda; the departure of senior Liberal moderates like Malcolm Turnbull, Julie Bishop and Christopher Pyne; and the Liberals’ broader problem with women.

By contrast, Labor has offered leadership stability (though not popularity) since the Rudd–Gillard–Rudd period. It has a comprehensive suite of policies with an overriding theme of fairness. On climate change, a prominent issue for many voters, it offers a more credible policy than the Coalition. Though many haven’t warmed to Shorten, he can point to an impressive line-up of prospective ministers, including popular women in senior positions.

The question is how much all this matters. Labor opened up a big lead over the government in the wake of the coup against Turnbull, but the Liberals have recovered much of this ground. Since the start of the campaign five weeks ago, the polls have hardly moved. There are probably two major contributing factors. One is that voters have made up their minds and are not for turning. The other is that they are so disillusioned with politics or so apathetic that they just haven’t been paying attention. Labor hopes the first reason is the predominant one, on the assumption that it is driven by people who want to vote the government out. The Liberals’ hopes lie in the second.

In the 2016 election, 42 per cent of voters decided how to vote during the election campaign, according to the Australian Election Study. That may explain why Shorten crept up on Turnbull and almost pulled off an unexpected victory. But the figure has fluctuated considerably between elections.

Morrison’s best chance is with those voters who aren’t interested in the election and leave their decision until late, provided he can get through to them. Even sowing a small doubt in people’s minds could be enough to make them decide to stick with the devil they know. In that respect the Liberals have plenty of ammunition: Labor’s paring back of tax concessions affects only a small minority, but the Liberals are trying to convince voters otherwise. The exaggerations, the misleading claims and the outright lies are all part of a desperate bid to grab the attention of the disillusioned and the uninterested — not that the Liberals are the only offenders in that regard.

Our political currency has become so devalued that perhaps it’s time for a royal commission into politics. Just look at what it’s done for the banks: not only are they eating into their fat profits to pay compensation to some of the previously ignored customers, but the whole culture inside financial institutions has changed, or so we are assured. If that can happen with the banks, imagine the scope for cultural reform in politics.

Now why haven’t we heard that argument from the parties during the campaign? •