Like Malcolm Turnbull, John Gorton needed a solid win to cement his authority, writes Paul Rodan. And the parallels don’t end there 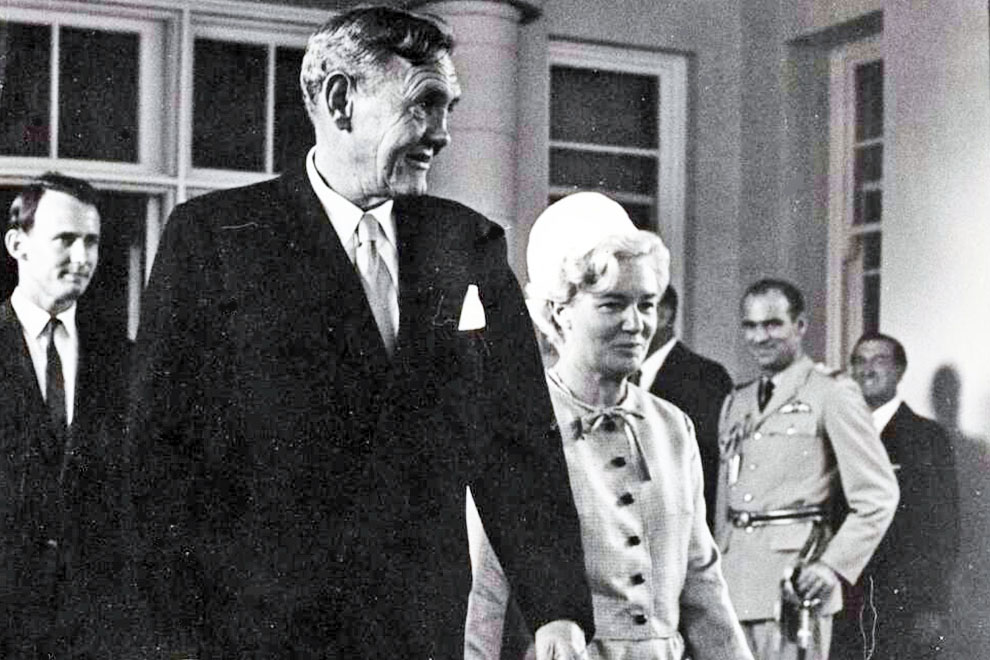 Problems looming: detail from a photo of John Gorton and his wife Bettina, c. 1968. National Library of Australia

When he succeeded Harold Holt as prime minister in January 1968, John Gorton appeared to strike an immediate chord with the Australian electorate. Rugged in both appearance and political style, the new leader’s down-to-earth persona seemed to represent an even more striking change from the staid Menzies era than had the transition to the debonair Holt two years earlier. Defending a government majority of thirty-eight, Gorton had every reason to believe that he could win convincingly whenever he chose to go the people.

This confidence would have been bolstered when it became apparent that the opposition Labor Party, led since early 1967 by the impressive Gough Whitlam, was still some way from presenting as a credible alternative government. Frustrated by party traditionalists, Whitlam resigned his leadership in April 1968 and then re-contested it, hoping to enhance his authority with a substantial victory. Instead, he narrowly beat left-wing challenger Jim Cairns, leaving Liberal strategists reassured that it was business as usual in the perennially divided Labor Party.

In this environment, it would have been quite unusual had Gorton not considered an early election. In Westminster terms, he had every right to seek his own personal mandate; in political terms, the state of the Labor Party virtually guaranteed few casualties on the government benches. And a customary argument against an early election – that it would throw House and Senate elections out of sync – didn’t apply because they had already been held separately (for the Senate in 1964 and 1967; for the House in 1966) following Menzies’s premature election of 1963.

Gorton did give consideration to an early poll, and press speculation continued through the year. Ultimately, though, he decided against it. The conventional explanation assigns the key role to the Democratic Labor Party, the breakaway anti-communist party that had formed as a consequence of the 1955 split in the Labor Party. Since its formation, the DLP had helped ensure the re-election of the conservative Coalition through its ability to discipline its preferences in Australia’s compulsory preferential voting system. In return, the party demanded strong anti-communist defence and foreign policies and what it saw as educational justice through government aid for private (in their case, Catholic) schools. Under Menzies and Holt, the smaller party mostly got what it wanted.

Early in Gorton’s term, reservations developed within the DLP about both the style and content of his leadership. He was not viewed as sufficiently hardline in his anti-communism and concerns about his personal life (mostly, it seems, his liking for a drink and the company of women) had surfaced in some political quarters, though they were not yet on the radar in the electorate at large. By the second half of the year, the DLP was sufficiently disillusioned to threaten a withdrawal of preferences if Gorton sought an early poll. It can never be known whether they were serious, although stories did the rounds that how-to-vote cards favouring Labor over Liberal had indeed been printed. Gorton’s subsequent claim – that the DLP’s threat played no role in the decision to hold off – seemed less than persuasive.

By the time Gorton called a House election, on schedule, in late 1969, his fortunes were in decline. All of the DLP’s reservations about his behaviour were now out in the open, and a Liberal backbencher (Edward St John) had launched an extraordinary personal attack in parliament earlier in the year. At a more substantial level, Gorton had antagonised conservative state premiers with his heretical centralist views on federal–state relations, and his idiosyncratic decision-making and office arrangements had disturbed those accustomed to the norms of cabinet government (including, as diaries later revealed, a new governor-general, Paul Hasluck, and deputy prime minister John McEwen). On the latter issue, the comparison with Kevin Rudd is unavoidable.

Despite Gorton’s growing problems, it needs to be remembered that public opinion polling was nowhere near as ubiquitous as it was to become in subsequent years. The expectation that, for all its problems, a government with a record majority would be comfortably returned was only shattered once the campaign was under way. A poll suggesting a genuinely close contest came as quite a shock – probably to both sides.

Ultimately, Gorton prevailed, but only just, securing a seven-seat majority in an election which, for a brief period on the night, looked like it might produce a change of government. While unfortunate for Labor, the outcome was a good one for Australian drama, providing David Williamson with the material for his marvellous play, Don’s Party.

But for Gorton, the party was essentially over. The loss of fifteen seats eroded much of his legitimacy, and while he survived an immediate post-election leadership challenge, instability and speculation were constants until he voted himself out of the party leadership (after a tied vote) in March 1971. For survivors in Coalition marginal seats, even those of them who weren’t too bothered about prime ministerial peccadilloes, federalism or cabinet government, the political future seemed bleak under a leader who had managed to lose most of a record majority in a single election.

With hindsight, it is difficult to see how Gorton could have done any worse had he gone to an early election in 1968. Labor was still in considerable disarray and, even had the DLP preferenced against the Liberals, the government majority was substantial. Moreover, Gorton appeared to enjoy solid public support throughout 1968: it was not until the following year that criticism of his performance made an impact in the wider public arena. Opportunity lost.

At one level, it is hard to envisage a Liberal leader less like Gorton than the suave, sophisticated, silver-tongued Malcolm Turnbull. In terms of the early election option closed off, though, the parallels are irresistible. After succeeding Tony Abbott, the new leader’s approval ratings were sky-high and his party’s poll lead suggested not simply minimal losses, but even a gain in seats. It’s true that a campaign may have trimmed some fat off the lead indicated in the polls, but it is difficult to envisage anything but a comfortable re-election had Turnbull gone early. Concerns about throwing House and Senate terms out of sync have some force, but the problem is solved by bringing forward the following House election (as happened in 1977 and 1984).

Latest polling seems to be more favourable to the government than earlier in the campaign, which means, as long as he doesn’t lose too many seats, Turnbull won’t need to entertain regrets about having held off. But an increased majority seems unlikely at this stage.

How many seats can Turnbull afford to lose before he needs to worry about his security of tenure? I suspect he might need a majority in double rather than single figures. If that is so, he will be hoping that the party hard-heads (on both sides) who see Labor struggling to reach double-figure gains are correct.

There is only one leader in this campaign who could feel secure with a narrow win, and it’s not Malcolm Turnbull. •

Paul Rodan is an adjunct professor in the Swinburne Institute for Social Research.