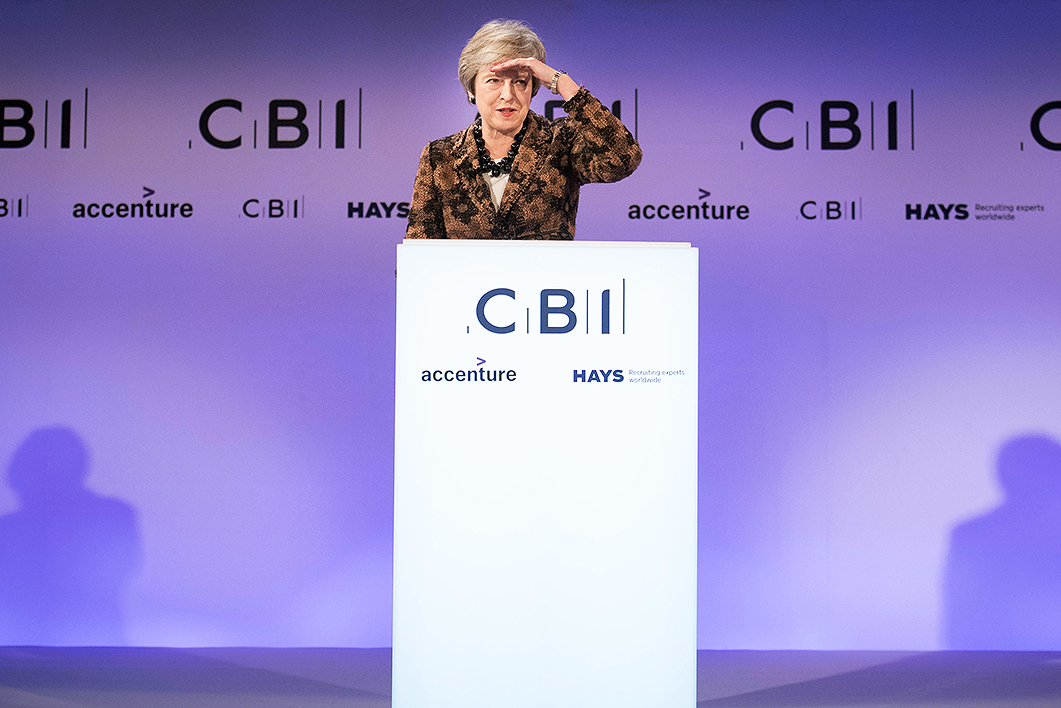 A trade-off she would accept: prime minister Theresa May at the Confederation of British Industry’s annual conference on Monday. Stefan Rousseau/PA Wire

“Am I going to see this through? Yes.” Theresa May’s pay-off line to journalists on 15 November, amid a London whirl of ministerial walkouts and rumours of more, set the terms of Britain’s latest political spasm over leaving the European Union. The previous day, two documents were released in Brussels and the UK capital, the by-product of nineteen months of opaque talks: a forbidding legal withdrawal agreement of 585 pages, and a vague political declaration on future relations of just eight. May’s future as prime minister is now hostage to their reception by her Conservative Party, the House of Commons, and the people.

Her strategy combines an appeal to the national interest with a display of grit. “This isn’t about me. It’s about what’s right for the country,” May told the journalist Sophy Ridge three days later. The prime minister is a shy figure, a poor communicator, uneasy with the public, clunkily repetitive in interviews, at ease only with close allies, but given credit for stamina and a sense of duty. At this desperate juncture, eighteen months after her ratings nosedived in a vacuous general election campaign, she is again straining to align personal brand and political message.

It is a tough sell all round. From May’s side, there are positives: no more EU budget payments or judicial oversight, and ending people’s free movement while avoiding trade friction (“we will take back control of our money, our laws and our borders” is her mantra). That said, the deal entails a transition period from Britain’s departure date of 29 March 2019 until at least 2021, during which the United Kingdom stays inside the EU’s customs union and continues to follow EU rules, thus precluding any trade agreements of its own (which were one of Brexit’s main selling points).

An equally indeterminate backstop, a device to guarantee the open border between Northern Ireland and the Republic, also grants the EU sinuous wriggle room vis-à-vis the north and the whole UK alike. These parameters will change only with a final EU–UK settlement and a solution to the backstop. That could take a decade. Meanwhile, Britain will have paid a divorce bill of £39 billion (A$69 billion) plus various extra charges, ceding potential leverage along the way.

Whatever else these trade-offs represent, it is not freedom’s dawn. Some critics — and not all of them are ultra-Brexiteers like the antiquarian Conservative backbencher Jacob Rees-Mogg — even portray it as vassalage. Jo Johnson, transport minister and ex–Financial Times journalist, left the government on 9 November, describing the exit provisions as “an utterly abject and shameful national humiliation.” But Johnson, unassuming brother of the flamboyant Boris, also describes May’s deal as making Brexit “an utterly self-defeating and pointless exercise.” He echoes widespread calls for a second referendum that takes into account the superiority of the UK’s existing terms within the EU over what May offers outside.

Could May ride her chariot through her opponents’ divided ranks, of which this example is but a taste, deploying the threat of no deal, and its attendant disruption, as a winning card? That is now a topic of fevered speculation — and of number crunching ahead of the scheduled House of Commons vote on 13 December. The government’s working majority of thirteen includes ten MPs from the Democratic Unionist Party, which represents Northern Ireland’s unionist (that is, pro-UK) and Protestant half of the population. Holding the balance of power after the 2017 election, the strongly pro-Brexit DUP struck a rewarding confidence-and-supply bargain with May. The party’s destabilising abstention on finance bill votes on 19–20 November, with more to come, piles more immediate jeopardy on the government than the hyped-up talk of a leadership spill from the Brexiteer right.

In opposing the withdrawal agreement, Arlene Foster’s DUP will be joined by a few dozen of the ideological Brexiteers among Conservative MPs (315 of the Commons’s 650). Also headed to the no lobby, for a different reason — they want to keep open the chance of staying in the EU — are veteran Europhiles such as the bombastic Kenneth Clarke and the scholastic Dominic Grieve, as well as Jo Johnson. And a few of Scotland’s thirteen Tory MPs share the fishing industry’s dismay at the deal and worry that the backstop will reboot Scotland’s independence cause. True, some MPs in all those categories might be amenable to whips’ flattery, bribery or blackmail, or they might lose their nerve or change their mind. Even then, extracting the required Commons majority of 318 (adjusting for seven Sinn Féin boycotters and other quirks) from the Tory benches alone is impossible.

That spotlights Labour, whose more workaday Brexit splits mean these tend to be overlooked. The party has plotted an artful course among the government’s travails, positing six notional tests before it endorses any government pact with the EU, while being noncommittal about a second referendum (which most of its members support). Many on the Corbynite left, following Jeremy himself, now downplay their lifelong antipathy to the EU, leaving just seven rigorous Brexiteers among Labour’s 257 MPs. More pragmatic Brexit supporters — the impressive Caroline Flint, for example — prefer May’s plan to an uncoordinated exit, which the party’s 2017 manifesto pledged to oppose.

The largest Labour group, pro-EU and Corbyn-sceptic, sees May’s deal as an obstacle to larger strategic aims. Its core members, such as the eternal coming man Chuka Umunna, are now working not just for a “people’s vote” on EU membership (as if the first one was not) but towards a new centre-left formation that could fill this putative gap in the political market. Prince-over-the-water David Miliband, lost leader Tony Blair and the outstanding Times columnist Philip Collins, author of Start Again: How We Can Fix Our Broken Politics, are names associated with this project, if that’s not too strong a word.

This Labour spectrum offers thin pickings for any May love-bombing. And the rest of the opposition, the Scottish National Party’s thirty-five MPs, Plaid Cymru’s four, and the Greens’ one, offers none at all. What cannot be ruled out is a potential two-step against a background of business tremors, a currency plunge and a media onslaught: that is, a Commons debate and vote where everyone lets it all hang out and most say no, then a follow-up brimful of self-important gravitas where, to the sound of sirens, enough say yes. “Maybe we need a bit more volatility to get us to a deal,” says J.P. Morgan’s Iain Stealey, a view elsewhere given hand-over-mouth. In the end, fear could be May’s best hope.

Until the decisive moment, getting Commons approval for the deal is whips’ work. But May is already on the front line with both her party and, via broadcasters, the public. More assured and less robotic in interviews than in that dreadful election campaign, which still casts a long shadow, her utterances nonetheless run the gamut from A (grinding platitude) to B (homily, of the “I believe, with every fibre of my being…” type). The want of imagination, or the craft to simulate it, in a country so badly in need of it is lamentable.

Will May win these audiences, or rather (for such is the maximal aim) ensure their glum acceptance of her transaction? The early signs are mixed. A closed Q&A session with Tory constituency stalwarts, where questions to the leader had been screened, reportedly did not solicit any actual enthusiasm, though a London business conference on 19 November went well for her: doubtless another trade-off she would accept.

Polls give the withdrawal agreement a negative verdict, while showing a high quotient of don’t-knows and never-heard-of-its: from 15 to 27 per cent back it, 40 to 51 per cent don’t. Adding other Brexit options — renegotiation, extending the departure date, another referendum, no deal, a legal ruling, a general election — reveals only dispiriting fragmentation. Clever, end-of-tether Tories and think-tanks such as Open Europe debate a knight’s move to a Norway- or Canada-style relationship with the EU (or in parliamentarian Nick Boles’s case, Norway-to-Canada). If EU membership was a raw binary in 2016’s ugly referendum campaign, Brexit has become a game of multidimensional chess that never ends and no one can win.

A halcyon Brexit was always a mirage. Long evaporated are any illusions that departure from the EU would be easy or costless. The deal on the table, at least for the moment, blurs the other supposed choices and amplifies the difficulties in their way. A second referendum, for example, needs a new question or list of preferences, new legislation, and new broadcasting and funding rules — and input from an exasperated EU. Where is the political basis for any of this to be found?

Britain’s new normal is not merely zero consensus but, among very many, zero desire to find one. May’s second-best hope lies in this morass. She visits the European Commission president Jean-Claude Juncker on 21 November to discuss the (non-binding) eight-pager on future ties. EU leaders will be preparing to “finalise and formalise” the two documents at a special summit, also in Brussels, four days later. Tweaks might yet be made to the former to allow her to claim a vital late concession and give fuel to her domestic push. Like Corbyn, to whom she has an unappreciated resemblance, May is a punchbag who has a knack of turning that to advantage.

In practice, May is seeking to be the beneficiary of all the fragmentation. Her lengthy record of unforced errors — alienating half the population, fixing the exit timetable without a plan, blowing an election, misleading colleagues, and more — certainly makes her foremost, though very far from alone, among its architects. If the Brexit process is a failure of governance, she was at the controls throughout. Not only Theresa May’s but also the country’s borrowed time is getting shorter. Britain needs to be very lucky in its next prime minister. •

The pioneering Indigenous journalist played a key role in establishing the Tent Embassy in Canberra. His work has been recognised this month by the Australian Media Hall of Fame 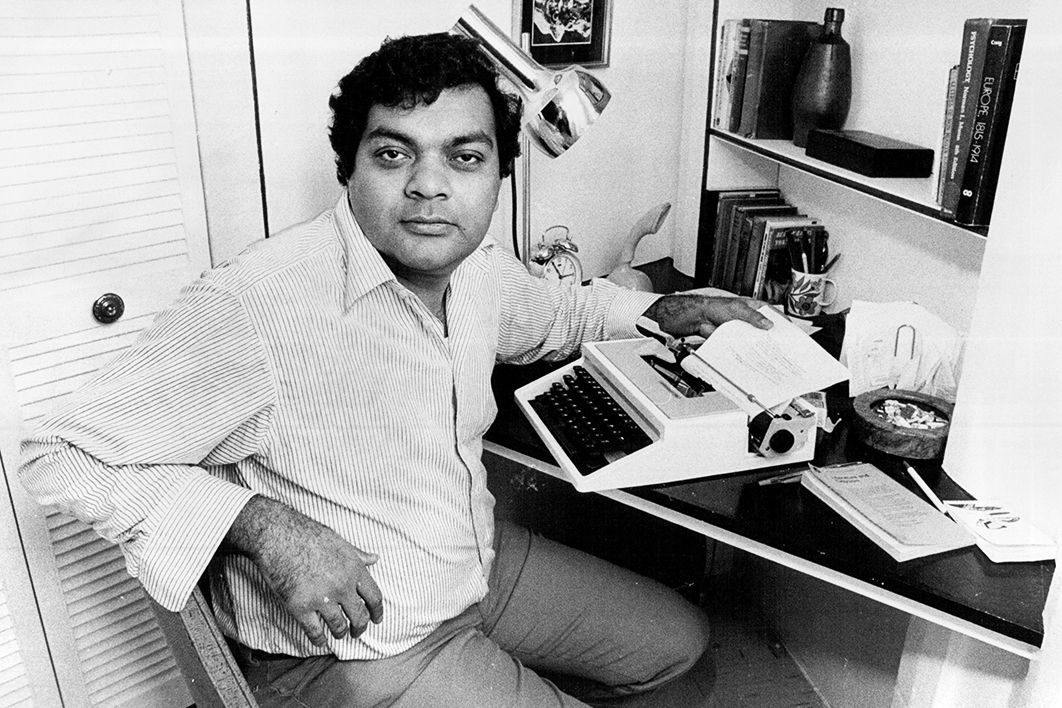