Theresa May versus Jeremy Corbyn: game on

The favourite trashes her brand, the underdog relishes his. Our correspondent is perplexed 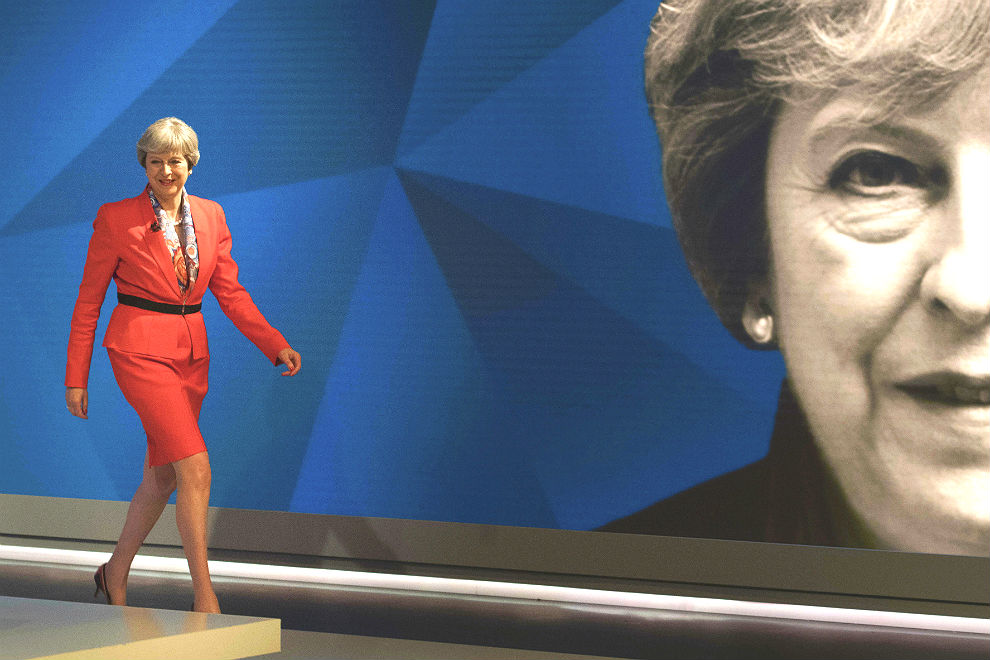 Three times during the last century, Britain’s Labour Party had reason to curse its luck on the eve of a general election. In 1924, a forged letter published in the Daily Mail spread fear of Soviet influence on the party. In 1970, poor seasonal trade figures wounded Harold Wilson’s government. In 1992, Neil Kinnock’s hollering climax to an upbeat rally turned his pitch for statesmanship to dust. Labour’s plausible expectation of victory was thwarted at the last. Each setback became a frustrating symbol of what might have been.

Could the roles be reversed on 8 June 2017? Much can still happen in this unsettling campaign, bifurcated by the slaughter of twenty-two music fans in Manchester. But it’s hard to imagine anything will equal its signal blunder: Theresa May’s panicked reaction to criticism of a scheme for care of the elderly in the Conservative Party manifesto. Her embarrassment peaked last Monday evening, 22 May, when she was interviewed live by Andrew Neil, a piranha among politicians, on the BBC’s main channel. Already drained of her normal assurance by three days of controversy, May’s shaky defence under Neil’s razor questioning stood in utter contrast to the commanding figure she has been accustomed to striking over her ten months as prime minister.

Three hours after that embarrassing broadcast, reports began to arrive of an incident at the giant Manchester Arena as the pop idol Ariana Grande’s audience was dispersing. Campaigning was suspended as the scale of the horror became clear, May phoning Labour leader Jeremy Corbyn around 4am to agree on a pause. For three days, human stories and security dramas eclipsed political news. The whispered consensus over these seventy-two hours was that May, as a national leader in a time of emergency, would by default restore her bruised authority. Simultaneously, Corbyn’s long-term sympathy for armed Irish republicanism and Islamist groups, and his lifelong opposition to counterterrorist measures, would be well aired.

Like many predictions in these confounding times, things didn’t work out quite like that, at least not immediately. For one thing, the first opinion polls published after the three-day break confirmed the previous trend of a Conservative dip and Labour jump. Even more startling, the Tories’ lead was down to between five and twelve points, consistent with those recent findings and giving no hint of boosting May’s quasi-presidential status. For another, Corbyn used the resumption of campaigning on Friday to forestall critics by delivering a speech linking the Manchester attack to Britain’s military interventions, this time nuanced enough momentarily to deflect familiar accusations of his apologetics and anti-patriotism.

In short, the thing that the controlling Theresa May seems to fear most, uncertainty, was spreading over this election. A serene glide towards big victory had seemed inevitable on 18 April when she sparked the contest, citing the need for enhanced authority to negotiate the terms of Brexit with the European Union. How long ago that feels! Now, it is her own flaws that are under scrutiny: among them a lack of forethought, peremptoriness, distrust in colleagues, and slapdash policy design. Worst of all is that in an instant she trashed her brand, by going from “strong and stable” to “weak and wobbly” overnight.

“Strong and stable” had been the prime minister’s ubiquitous offer to the voters. Since two years of exacting talks with the EU were in prospect, the formula made sense and aligned well with May’s image as a reliable and trustworthy, if stern, leader. For a month she looked likely to bore her way to electoral success on its back.

At this point the post-manifesto kerfuffle sunk to debacle. The document’s left-communitarian flavour had already proved unpalatable to influential senior Conservatives and media backers of the party. The secrecy of its preparation added to their annoyance. Within a day, public criticism began to focus on its proposed reform of the funding of social care. This would require elderly people to pay for most of their care, out of the value of their home if necessary, down to protected assets of £100,000 (A$172,000). Against the putative benefit of replacing the current, lower threshold of £23,250 (A$40,000) – which is means-tested but home-excluding – is that some families could lose the right to use or dispose of a property upon a parent’s death.

Many property owners, not only from among the Tories’ natural constituency, were disconcerted at what they saw as an attack on the cherished right of inheritance. More politically damaging was the inbuilt unfairness: a quick, early death could reward the bereaved in monetary terms, while a protracted illness might appear by comparison to penalise them. This factor was seized on, including by an unexpectedly adept Labour campaign, and the proposal skilfully labelled a “dementia tax.”

Thus customised for harsh election combat, the notion came under withering fire. For a party with long-avowed tax-phobic credentials, it was blowback with a vengeance. Few among the ranks volunteered to defend it. A fatal lack of consultation was evident. Australian strategist Lynton Crosby, this time only campaign deputy to long-term party operative Stephen Gilbert, reportedly saw the manifesto only two days before the launch, and wasn’t pleased. But May’s recoil compounded the problem. Announcing that there would be an unspecified cap on the amount any individual would have to pay, she then insisted, at a brittle session in Wales: “Nothing has changed! Nothing… has… changed!” The prime minister had achieved the worst of both worlds: screeching U-turn, then refusal to extract any credit for it.

From misguided presentation to crisis mismanagement to sheer failure of leadership, here is a case study for Harvard Business School. The pity of it is that the initial proposal hinted at awareness of linked challenges: Britain’s ageing population, broken housing market and intergenerational inequity, all of which require imaginative thinking beyond the electoral cycle. Key recommendations of Andrew Dilnot’s report on funding of social care and support, published in 2011, languish. If Theresa May’s humiliation were to force its retrieval, the “manifesto meltdown” (the Economist’s phrase) might yet be of service.

The tumbling events of these ten days have punctured earlier estimates of a huge Conservative win, leaving the outcome more open than seemed possible six weeks ago. Two factors now intrinsic to any British election reinforce that openness: the variety of regional polities and agendas in play, and the way that contests also operate in a borderless digital space whose cyber-platforms fuse media, communication, advertising and partisanship.

Increasingly refined polling techniques have been put in place since 2015, when the result came as a shock to almost everyone. Among them are more online-only surveys, attempts to factor in groups on the political margins, and the tracking of likely participation by younger voters. These, and their informing assumptions, will soon be tested against an ever more complex reality. Matt Singh, whose against-the-current, eve-of-poll analysis was on the button in predicting an outright Conservative majority two years ago, says that “pollsters are as nervous as politicians.”

Merely by spreading doubt, such trends add to Labour’s run of good news. Poll ratings as high as 36 to 38 per cent reflect substantial backing for the party manifesto’s extravagant promises, which include abolishing tuition fees, lifting wages, building a million homes, and taking control of utilities. Corbyn’s numbers too have steadily risen as he stays faithful to his own brand with setpiece rallies, while surviving media interviews with a mixture of wary congeniality and practised sermonising. He has, after all, been a member of parliament since 1983, when he was thirty-four, and spent decades as a platform speaker. (May, eight years younger, entered the House of Commons in 1997.)

Theresa’s troubles, clearly, help Jeremy. Broadcasting’s statutory obligation to provide fair coverage of the main players during an election campaign have a welcome balancing effect. Another circumstance is also at work. After two years of permanent rift since Corbyn became leader, Labour candidates and canvassers trying to maximise local votes have an interest in minimising the party’s divisions. For Corbyn-sceptics among them, the best option is to customise their local appeal, pick à la carte from the manifesto, assail May and the Tories with relish – and ignore their candidate for prime minister.

In this silent pact, both Labour sides agree to defer the coming battle – for the party’s name, resources, history and future, as much as for its leadership – until after 8 June. If Corbyn loses heavily, with seats (232) and a vote share (30.4 per cent) below those won under Ed Miliband in 2015, he must go, say critics. Corbynites have a pre-emptive barrage ready. A biased media, a rigged system, a toxic Blairite legacy, disloyal MPs’ plotting, Manchester’s diversion: against these odds the result is a strong foundation, which shows that we need to complete the Corbyn revolution by building Labour into a true socialist movement.

Jeremy’s closest allies, veterans of Stalinist and Trotskyist factions of the 1970s–80s whose views, like his, have never altered, are steeped in the logic. Tony Benn set the template; days after Margaret Thatcher’s 1983 landslide, when Labour was reduced to 27.6 per cent, the left’s then hero hailed as an “important result” that “for the first time since 1945, a political party with an openly socialist policy has received the support of over eight and a half million people.”

But what if many voters trump Labour’s internal pact with a more private one of their own? What if some blend of ancestral loyalties, constituency bonds, personal–familial interests, anti-Tory suspicions and future worries leads them to endorse Labour’s policy free-for-all – or just delivers the party a share that compares well with two years ago, denying Theresa an unalloyed triumph? Then, perhaps, Jeremy lives, the struggle continues, the Tories founder, their media supporters combust, sterling plunges – and there would be immense pressure on Labour’s factions to coalesce for the country’s as well as the party’s good.

So with ten more days to go, an amorphous race has at last found its theme. The first of two live TV inquisitions of the respective leaders on Monday evening, 29 May, at Sky News’s headquarters in west London, seemed to underline the point. Corbyn and May avoided a skewering from both a studio audience and the once-feared Jeremy Paxman. The Independent’s John Rentoul assesses the result as a trade-off between campaigning experience and negotiating authority, in effect a goalless draw.

It might be almost normal, until you remember how fantastical such a program would have seemed even two years ago. Since 2014, the UK’s extraordinary democratic tumult has seen Scotland’s referendum and pro-independence hurricane, a Conservative election win, Labour’s Corbynite insurgency and cold war, Brexit, and now this second election. Yet none of those great causes has been settled; on the contrary. Whatever the twists to come between now and Thursday week, Britain’s interesting times will continue. •

Dragged behind a chariot, watched by the crowd

Books | In the titanic battle over Greece’s economic sovereignty, the local audience was the big casualty 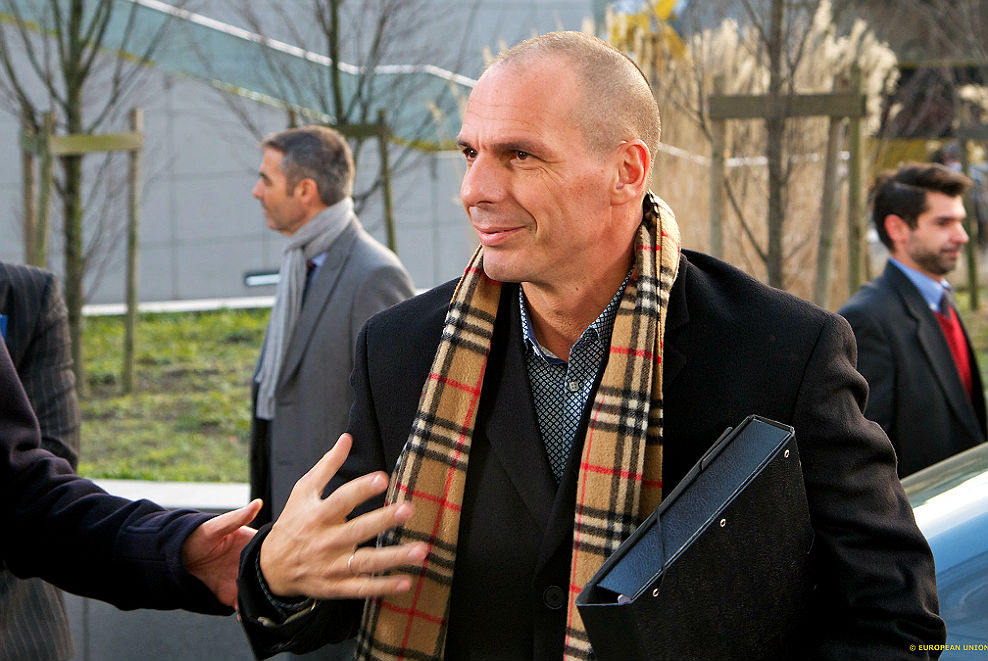