Britain’s voters have forced a two-party system to begin to operate by a three-party logic. And it’s about to get even more interesting, writes David Hayes 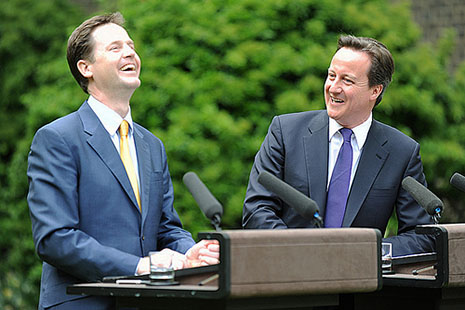 SOMETHING happened in British politics in the days after the general election of 6 May 2010 that will generate books, theses, conferences and public argument for years to come. By any routine standards of democratic procedure, its narrative heart was as banal as can be: a series of negotiations that led to the formation of a coalition government between the Conservatives and the Liberal Democrats – respectively the first and third parties in terms of the popular vote and seats won. By the standards of Britain’s brutal majoritarian politics – and indeed in light of the combative month-long election that had just ended – it was a high-level political compromise that felt (and still feels, three weeks later) like a revolution.

So the questions raised by these extraordinary six days in London go beyond (even if they include) the cyclical contingencies of electoral politics. Does the Con–Lib Dem coalition represent a crucial stage in Britain’s progress towards becoming a “normal” democracy, or does it highlight the country’s enduring democratic exceptionalism? Does the core partnership of the respective party leaders, David Cameron and Nick Clegg (now also prime minister and deputy prime minister), offer a true departure from discredited monopolistic governance or its restoration in different guise? More prosaically, will the government succeed in managing the acute public debt crisis, and rule for a full five-year parliamentary term as it has promised? And how will the Labour Party cope with opposition after the thirteen-year hegemony of Tony Blair and Gordon Brown, and which of its characters will emerge dominant now that the “New Labour” era is over?

It is part of the fascinating indeterminacy of this moment in Britain’s history that these questions have no straightforward answers.

It is retrospect’s genius to cast a glow of inevitability over even the most recent past. And indeed, some first drafts of history are already painting the intense post-election week as the fulfilment of a grand coalition scheme whose design was pre-formed in some senior Conservative and Liberal Democrat minds.

The evidence, slender as it is, draws on albeit prescient think-tank work noting the affinities between the localising, smaller-state agendas of the two parties after a decade and more of New Labour’s centralism. But the coalition’s cold political rationale owes more to the bare arithmetic of the election’s outcome, which produced under Britain’s first-past-the-post system the very “hung parliament” that polls had foretold from the start of the campaign. The Conservatives, whose yawning lead over Labour had narrowed in the months before the election, ended with 36.1 per cent of the votes and 306 seats in the 650-member house of commons; Labour with 29 per cent and 258 MPs; the Liberal Democrats with 23 per cent and fifty-seven MPs.

Yet if the forecasts were right on the big picture – and the exit polls released at the launch of an epic night’s media coverage were even more so on the details – there was little immediate sign of preparedness for what was to follow. As the results poured in and predictions and emotions fluctuated, five things became clear: the Conservatives would become the largest party but fail to win an overall majority; Labour would remain a clear second as its heartland vote stubbornly refused to collapse; the Liberal Democrats would hold the balance of power even though the “insurgency” ignited by Nick Clegg’s performance in the first of the party leaders’ TV debates proved phantasmic; the differential patterns of voting in Britain’s four nations would place the “national question” at the centre of post-election calculation; and granular local realities (including incumbency, candidates’ scandal-quotient, and the singular flavour of many constituency contests) would be in many cases, and unpredictably, decisive.

By the morning of 7 May, it was apparent that the British electorate had delivered a verdict to beat them all. After a fashion, everyone had lost – yet everyone was still in the game and had something to celebrate. This dual aspect affected even the smaller parties, among whom (for example) the Greens celebrated the election of their first MP while seeing their vote decline overall. The resulting fluidity was to dominate the frenetic days that followed.

Their pattern was set by a quickstep pas-de-trois involving the three leaders who had dominated the campaign, each intent on making a sort of victory from the exhaustion of failed hopes. Both David Cameron and Gordon Brown sought to entice the Lib Dems into supporting their claim to govern by offering movement towards the party’s foundational principle of electoral reform. Nick Clegg, whose pain was the sharpest of all given the scale of the hopes that had come to be invested in him, had stated during the campaign his preference to talk with the leader of the largest party; this gave the Con-Lib Dem option an advantage that – but for a moment after an artful intervention by Brown, announcing his intention to resign as Labour leader soon after a putative Lab-Lib Dem deal was agreed – it never lost.

After all, the electoral verdict made the logic of a joint Con–Lib Dem governing enterprise seem more compelling than any other. Yet when Gordon Brown walked away from 10 Downing Street in the early evening of 11 May, and David Cameron entered an hour later to announce that he would lead a full coalition government – as opposed to one with calibrated levels of Lib Dem support – the words still seemed disconnected from any familiar political reality.

A seismic shift had taken place. What had happened? The initial fuel for the Con–Lib Dem negotiations was that electoral numbers and pre-existing policy overlap made a new centre-right formation appear more plausible than the centre-left realignment which Labour and Liberal Democrat “progressives” had long aspired to. The deep opposition of some influential Labour figures to electoral reform, and demands to the party’s leaders to acknowledge defeat and embrace opposition, also played their part.

But a vital additional factor seems to have been that David Cameron and Nick Clegg realised that a close political bonding suited them both (Cameron especially in relation to a righter-than-he party, and Clegg in the context of his “once-in-a-lifetime” rhetoric and the crushing result that followed); and that their similar social backgrounds and identical ages (forty-three) also translated into a comradely spark. Alongside core teams which (on the Tory side in particular) showed in their hunger for power a striking readiness to adapt and concede under pressure, a deal far more extensive than could have been imagined even a week earlier was forged.

The recasting of Britain’s political world continues. The landmarks include a Cameron–Clegg press conference in Number 10’s rose garden, where the evident warmth between these fine specimens of youthful, affluent, self-consciously relaxed and modern upper-middle-class English manhood stretched the attending media’s penchant for romantic metaphors to the limit; the creation of a cabinet with five Lib Dem ministers (out of twenty-three in all); the publication of an ambitious and detailed joint program that includes sweeping legislative pledges on civil liberties, welfare reform, fixed-term parliaments, and independent schools; and the Queen’s speech opening the new parliament on 25 May, where the regal lips voiced the government’s commitment to “freedom, fairness, and responsibility” against a background of Liberal Democrat MPs squeezed onto the packed government benches alongside their Tory erstwhile rivals.

The reverberations of the compromise revolution are still working themselves through an ultra-competitive political and media culture whose last experience of coalition politics was the wartime government of 1940-45. In the absence of clear reference-points, all sides – if the word is not too redolent of Nick Clegg’s “old politics” (already, as with “new politics”, a cliché) – are quietly adjusting.

Labour’s task is hard, if perhaps less daunting than often looked likely during Gordon Brown’s three-year premiership or a sometimes bleak election campaign. The challenge of building a post-New Labour party – under one of the four forty-something leadership candidates (David Miliband, Ed Miliband, Ed Balls, Andy Burnham) of the six who have declared – will require reconnecting with the society it has done so much to shape in these thirteen years, and understanding what its defeat reveals about the emerging demands of democratic politics.

For an experimental government formed in such hedged circumstances, the coalition has made a smoothly impressive start. Its deficit-reducing determination, embodied by the chancellor George Osborne’s Lib Dem sidekick David Laws, is signalled by the first tranche of cuts (to, for example, IT programs and consultants) announced on Monday. But its mettle will be severely tested by unresolved internal differences, especially over electoral reform (which the Conservatives oppose and will mobilise against); by tensions between the parties on the ground (as in a postponed parliamentary election in the northern English seat of Thirsk & Malton, where it is bitter Con–Lib Dem business-as-usual); by Scotland, where the Lib Dems’ eleven seats (out of fifty-nine) underline their crucial coalition role yet may leave them vulnerable in an environment hostile to Tory-linked rule; and by inevitable crises, domestic or foreign.

Britain’s voters contrived in the 6 May election to deliver a result that forced a system designed for two-party politics to begin to operate by a three-party logic. To entrench this amazing achievement will now require their government to facilitate new constitutional rules – while managing a perilous economic transition in a way that minimises social hardship and avoids national fragmentation. The strains may force the coalition into attempted self-reinvention earlier than it would like. At that point, will its leaders move further in the direction of democratic revolution, or of elite compromise – or be pressed into an as-yet-unimagined realignment? Watch this tight little island with its multinational state: politics here is about to get even more interesting. •

The scandal that almost wasn’t

We now know that Securency and Note Printing Australia were fined a record $21.6 million in 2012. But why had most of the media run dead on the story?