Letter from London | Australia’s political drama gives Britain respite from Brexit, along with a crash course in Canberrology 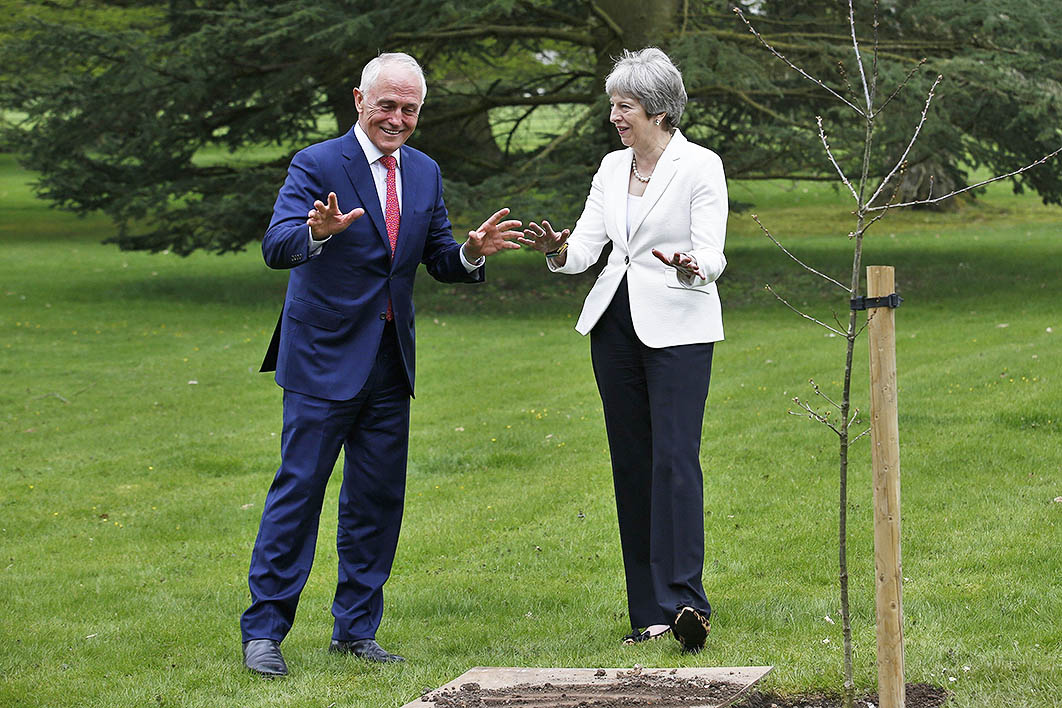 Happier days: Malcolm Turnbull with Theresa May during a tree planting at the British prime minister’s country residence, Chequers, in April. Luke MacGregor/EPA

“When you have Italian friends making fun of your country’s political instability, you know you have problems.” The Financial Times quote jumped off the page. Good angle on the two-year running farce that is Brexit, I thought. So much of the endless mockery comes from Germany or Fra — hold on, what’s a picture of Malcolm Turnbull doing there?

British coverage of Canberra’s latest spill motions — a term at last entering the lexicon here — has on the surface been impressively straight. The Liberals’ power games are well reported, energy and immigration policy cited, and the underlying political problems listed, though the Queensland dimension and the Labor opposition barely feature. There’s no trace of the schadenfreude that has accompanied tabloid reporting of Angela Merkel’s year of troubles. Clearly, sporting rivalries don’t transfer to politics. At the same time, there’s a perceptible motif of bemusement, tinged with the relief of being temporarily off the hook. And the sterling work of reporters on the ground has surely firmed up London editors’ grasp of Canberrology.

At the shakier end was an editorial on 25 August in the tabloid-sized Times, part of Rupert Murdoch’s stable, which is currently on an investigative roll. “Democracy Down (Under)” veers from lurid (“ritual bloodletting… frenzied public humiliation… a spectacle of back-stabbing and indeed front-stabbing… leaders are roasted alive if they show signs of losing support in the heartlands”) to arch (“Friends have the duty to say: mate, your system is dysfunctional”), before settling on trite (“Mr Morrison will put the brakes on Mr Turnbull’s shift to the left but will still need to work hard to differentiate his party more clearly from Labor”).

A day earlier, as the drama was climaxing, the Financial Times’s front page had signalled its own view with that alluring reference to “Italian-style political instability.” Inside, a scorching editorial attributed Turnbull’s impending fall to a toxic fusion of culture and energy wars:

The troubles stem from dysfunction in political institutions, a shock-jock right-wing media and a shift to a US Tea Party-style populism within the ruling Liberal party… [Peter Dutton’s proposals] risk consigning Australia to another decade of energy insecurity, rising prices and failure to meet its obligations on carbon emissions… [Business support for a bipartisan approach] makes the Liberal–National coalition’s latest decision to press the self-destruct button over energy policy especially ill-timed.

The weekly Economist, going to press on Thursday, had its customary headline pun fun (“Poison spill,” “Spill will”) before getting serious. “Australians are frustrated by stagnant wages, but they have never rallied behind right-wing populists,” its reporter said. Dutton is “one of his party’s most reactionary figures.” However, “the fad for spill motions” makes the country’s politics look “alarmingly volatile.”

These three publications, while distinct in character, are each at heart centre-right, pro-business, culturally liberal and international. All are dismayed by Britain’s own populist temptations. It’s striking then that their commentaries nowhere mention Brexit, and in this respect they are typical of wider coverage. Could it come to matter that Australia’s leadership tussle is, refreshingly, not being seen through a solipsistic Brexit lens, as has almost every major overseas news story for two years?

The latter was true of the federal election in 2016, held just nine days after the UK vote to leave the European Union. And since then, London’s interest in Australia — security agencies apart — has been defined nearly exclusively by the prospects for a free-trade deal. Alexander Downer’s former status as high commissioner in London made him a fixture on the BBC, while his breezy optimism won favour in the anti-EU press: a rare double. More recently, the farmers’ plight and China tensions have had a good airing. But reaction to Australia’s latest drama, coinciding with fevered divination of Britain’s post-Brexit fate, invites a glimpse of a less inward future.

Dream on? Probably. That Scott Morrison’s early calls were to Donald Trump, Joko Widodo and Jacinda Ardern probably gives Fleet Street’s terrible twins — the Daily Mail and Guardian — material for default lament of Britain’s collapse into irrelevance. The Mirror, a robotic left-wing tabloid long eclipsed by Murdoch’s Sun, is already on the case, reading Trump’s empty boasts of friendship with Australia as a “swipe” at Theresa May and a “slap-down of the so-called ‘special relationship’ between the Britain [sic] and America.” Whereas the Telegraph’s Jonathan Pearlman, writing in the paper’s Sunday edition, stays on topic in an overview of “this bizarre Australian phenomenon [of] revolving-door leadership.” Of the new prime minister’s first press conference, he says, Morrison “was unable to answer the question the nation, and the world, wish to know: why did his party remove another elected leader?”

Such reports are a reminder of the all-round value of the informed, connected foreign correspondent. Jamie Smyth’s reports for the Financial Times during the crisis, weaving the views of experts such as ANU’s Ian McAllister, Melbourne’s Sarah Maddison, and Griffith’s Paul Williams into a concise daily narrative, are a good complement to Inside Story’s roster. His latest, on the cabinet reshuffle, is just out. That Italian sucker punch, sourced to Kevin Rudd’s former political strategist Bruce Hawker, came from Smyth’s story on the Turnbull–Dutton bout. On the eve, he wrote a long, absorbing piece on the “African gangs” tale, focused on the Australian Rules player Aliir Aliir.

There is of course much more, not least on broadcast and social media. On BBC radio, the ABC’s Geraldine Doogue voiced embarrassment that Australia had become “the coup capital of the world in the democratic sense.” Vox pops with disarmingly contemptuous Sydney citizens provided one highlight, the scabrous politesse of Tonightly clips another. Some British viewers were rhapsodic: “Leave it to the Aussies to cut through the bullshit in the most coarse way and make it sound like you just shared a joke,” wrote one. In face of “the dog-eat-dog antics of their political class” (Roger Maynard in the Sunday Times, another Murdoch outlet), the Australian branch of the international fed-up citizens’ union, acronym optional, is evidently kicking free. ●

While Fairfax’s future seems likely to be in the hands of Nine, much of its past has recently been made accessible at the State Library of New South Wales. At a symposium earlier this month, Bridget Griffen-Foley introduced the company archive 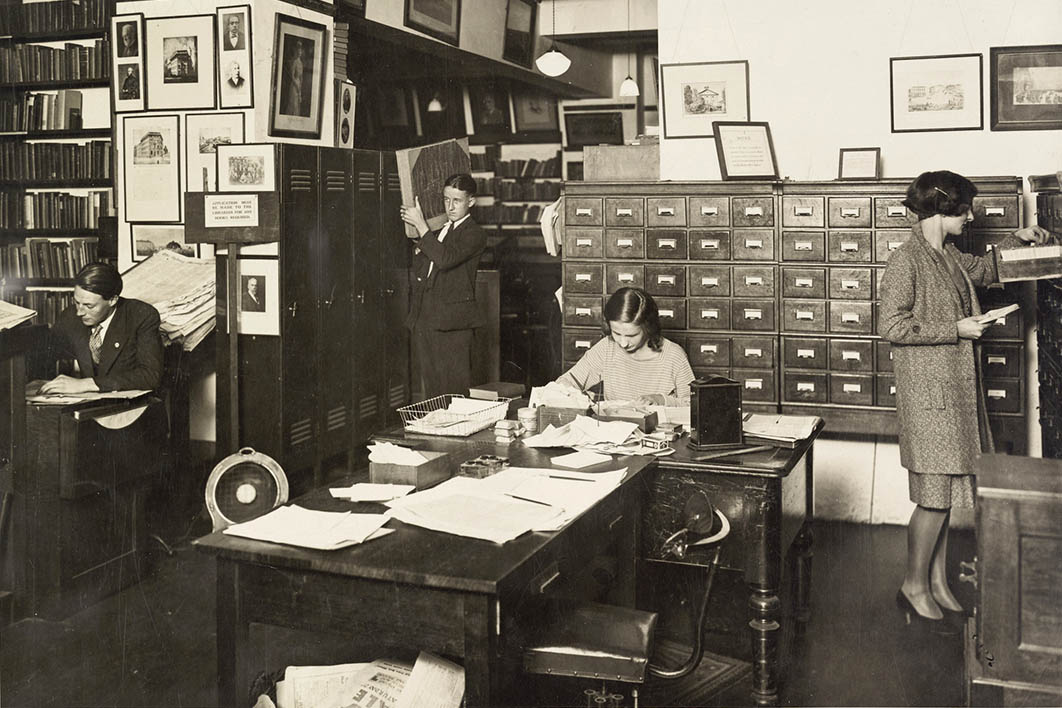