Britain’s media finds in Australia’s drama some relief from the country’s own, says David Hayes 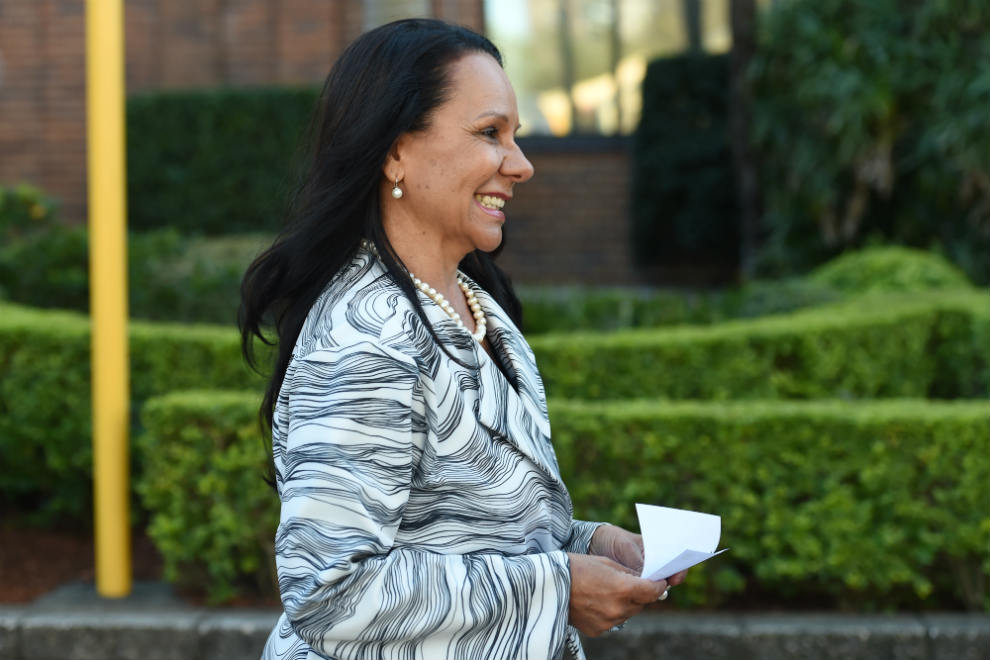 Democracy in action: the new Labor member for Barton, Linda Burney, arrives for a press conference in Sydney on Sunday. Paul Miller/AAP Image

Australia’s recent elections have had a fair go in the British media, not least because of the interest generated in Britain by the dramatic contests for the leadership of both major Australian parties (or spills, as some of us are learning to say). This time was different: the two-month campaign coincided with the squabble here over Brexit, which left foreign news, especially non-European, fighting for airtime and page space.

But Australia’s immigration policy did feature strongly, especially when advocates of leaving the European Union embraced a new mantra – “an Australian-style points system” – as a good option for a post-EU Britain where free movement to and from the other twenty-seven member countries would no longer apply. And leading players on Britain’s political right, who champion their antipodean links far more vocally than their counterparts on the left, also invoked Australia as part of their whimsical aim of turning the “Anglosphere” into a geopolitical alliance.

Neither of these registered much beyond slogans, though. Remainers-in-the-EU were quick to point out that such a migrant-selection system already applies to non-EU migrants and, besides, Australia receives more migrants per capita than Britain does from the EU. The argument went into remission as the post-referendum “national nervous breakdown” (Robert Harris’s phrase) took over. Now, the Australian election’s inconclusive result and tense aftermath have at last given the British media a compelling political story that offers respite from our own.

This time, there was no equivalent of Nick Cater–style cheerleading for Tony Abbott, a feature of the Sunday Times’s coverage in the 2013 election. Instead, the News Corp–owned paper’s fine Far East correspondent, Michael Sheridan, notes Malcolm Turnbull’s “slump in support” and election-night speech to a “half-empty ballroom,” quotes Bill Shorten’s immediate reaction (“Mr Turnbull will never be able to claim that the people of Australia have adopted his ideological agenda”), and cites the advances of Nick Xenophon, Pauline Hanson and (a welcome touch) Linda Burney. A reference to mutual insults between James McGrath and Alan Jones provides local colour, illustrating that the “Australian tradition of robust political exchanges remained intact.”

Rod McGuirk of the Associated Press, in a widely syndicated article, writes that the election has continued an “extraordinarily volatile period in the nation’s politics,” with only the third hung parliament since 1940 now possible. He cites the observation of Monash University’s Nick Economou that Turnbull’s ill-timed election had brought several hardline social conservatives and right-wingers into the Senate, with whom he would find it difficult to work if his government survives: “What an amazing amount of political damage Malcolm Turnbull has been able to inflict in a very short period of time as prime minister,” Economou says.

The Telegraph’s Jonathan Pearlman, describing Turnbull’s election-night address as “unusual and slightly shrill,” writes that his “political gamble appears to have spectacularly backfired.” The report, accompanied by a short video showing voters at the London high commission on Friday (“I’m a huge fan of democracy in action!” says one), mentions the Labor leader’s sausage sizzle moment, which is compared here to Ed Miliband’s tussle with a bacon sandwich.

The Mail confirms that a right-wing editorial stance needn’t inflect news reporting, with Peter Devlin quoting Barrie Cassidy’s assessment “early in the night” that a hung parliament was likely (“Good I’ll get the rope,” says a Sydney-based commenter) and characterising the election as “a cynical electorate seemingly not impressed enough with either party to give them the power to govern in their own right.”

Peter Wells of the Financial Times, writing that Australia “has joined a growing list of closely contested political decisions” globally, contrasts the calm market reaction with the Brexit fallout. Most financial analysts are sanguine, though Wells speculates that budget reform problems might put Australia’s triple-A credit rating in jeopardy. For now: “No worries, mate.”

The paper’s Australian correspondent, Jamie Smyth, however, highlights Labor’s plan for an inquiry into an allegedly toxic banking culture and says big business “is likely to be a loser from the election” even if Turnbull remains in the post, as he “is unlikely to be able to deliver on his pledge to cut company tax rates and tackle trade union power.”

Smyth reports Shorten’s charge that Turnbull had “Brexited himself” and become the “David Cameron of the southern hemisphere” by leading “a divided party [to] an inferior and unstable outcome.” Turnbull’s predicament is encapsulated by the scathing judgements of Griffith University’s Duncan McDonnell (“a massive defeat” for the prime minister), ANU’s Ian McAllister (a “far too long” campaign and “messed up” tax policies), and Melbourne University’s Sarah Maddison (in failing to “change course” and “follow a more liberal path” after Abbott, “he didn’t come across as sincere or a conviction politician”).

“The election results suggest Australia is experiencing some of the voter disillusionment seen in other western democracies with the two mainstream political parties receiving their lowest share of first preference votes since at least 1943,” says Smyth, a point illustrated by voters in the “explainer” alongside and debated usefully below the line, by “Aussie Red” and “wise monkey” in particular. Before the booths opened, the Economist had said the campaign “shows how outmoded Australia’s two-party system has grown” when faced with the more complex concerns of a more diverse society.

The titanics of British news and opinion respectively, and for many the first choice on any topic, are the BBC and the Guardian. The BBC’s website covers the show, from the voting tallies through the psychic croc to Laurent Sanguinetti’s “planet of forbidden prime ministers,” while the Guardian adds depth and brilliant data to the BBC’s news concision. Their riches include a quirky feature by the broadcaster on the seat of Durack, and a reflective one by the paper’s Bonnie Malkin on going beyond being “a half-hearted expat.”

There are clearly more rounds in the post-election drama to keep the British media interested. Jon Snow’s Channel 4 news interview with Clive James on 4 July, mostly on literature, death and Europe, touched on the subject. Australian politics is “a real mess,” the omnivore said. “What you’ve got here is nothing like what you’ve got in Australia!”

That was hard to gauge from the snatches of ABC’s live election night broadcast I watched, whose good humoured professionalism was as beguiling as the information was bewildering. A few phrases in, however – “double dissolution,” “two-party-preferred,” “we’re in for a long night” – and I was riveted, not least by Antony Green’s high-speed tightrope walk over each result (“In Richmond, there are a lot of alternative lifestyle communities”… “I suspect these are just reports from one booth – back to the candy bars on this!”… “Lindsay, a bellwether seat” ... “It’s difficult to beat them [Senate figures] into any shape”). And the rare ventures from the studio where Scott Morrison and Penny Wong lightly sparred brought the unfamiliar sight of candidates being interviewed as their supporters formed around them. The one with Linda Burney in Barton (we fought “a good old-fashioned Labor Party campaign”) was downright moving. Democracy in action indeed.

The “death of distance” never seems so real than when leaning in to an election program on the other side of the world – yet also so much what the French call a “false friend,” as any tiny slice of a huge and complex reality must be.

That London continues to see its own reflection is suggested by the Times’s Monday editorial (“Disarray Down Under”), which hears Australian echoes of “Britain’s post-Brexit turmoil”: “Across the country, a growing number of voters in the poorer regions argued, like Brexit supporters outside London, that their interests had been overlooked.”

In the electoral as well as the sociological realm, however, a far closer parallel suggests itself. Many of the ingredients of Australia’s result –a centre-right incumbent who falls short at a time of his choosing and is now stalked by rivals, a challenger who gains both seats and respect, the rise of smaller groups, the continued decline of a historical two-party hegemony, a (likely) hung parliament – were foreshadowed by Ireland’s election on 26 February, under the country’s single transferable vote (Hare-Clark) system.

The comparison will doubtless have occurred to the Irish Times’s Sydney-based correspondent Pádraig Collins, whose despatches are striking for their range and insight. In Ireland, it took seventy days to form a government. However things turn out in Australia, the overlaps between the two states, and lessons to be learned from these elections, are worth exploring. If Britain can tune in, then so much the better, for after Brexit it needs curiosity and engagement with the world more than ever. Just following the great Australian drama is a good start. •