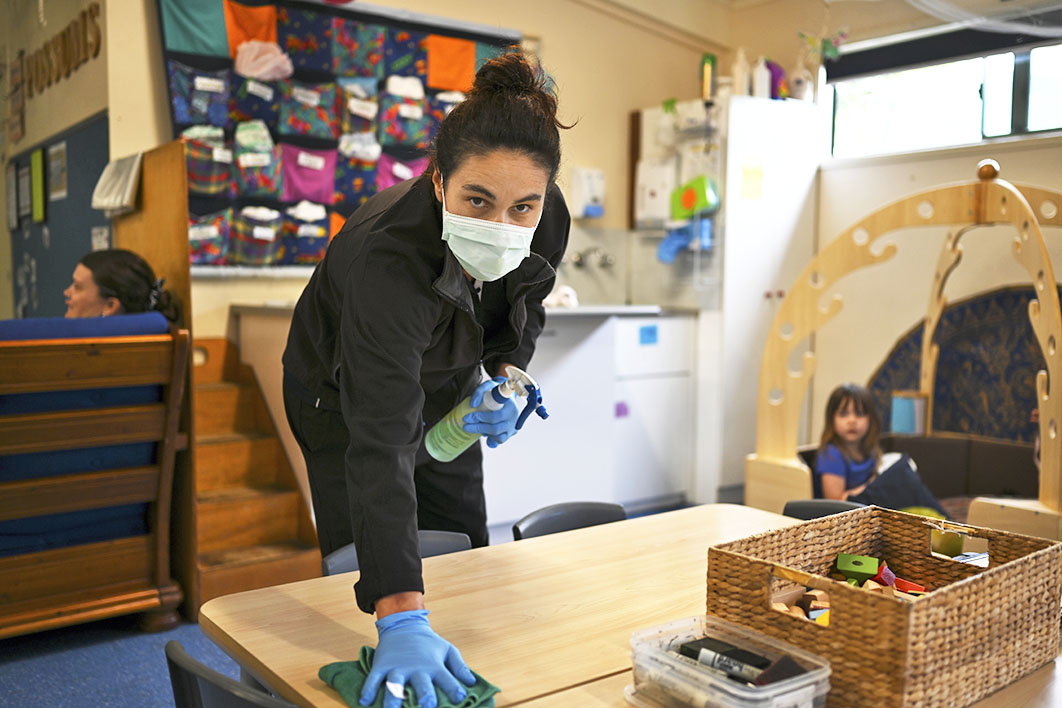 Early childhood educator Josephine at the Robertson Street Kindy Childcare Centre in Helensburgh, south of Sydney. Increased spending on childcare is the best way for the federal government to help women during the recovery from the pandemic. Dean Lewins/AAP Image

International Women’s Day 2020 came at the start of Australia’s fight against Covid-19. Since then, the progress to “Covid normal” has been significant, but it has come at great cost, particularly for women.

As we celebrate International Women’s Day, we should recognise the economic pain women have borne through this crisis. They were more likely to lose their jobs, more likely to pick up extra unpaid work, and less likely to get government support.

It isn’t too late to right the wrongs. In a new Grattan Institute report we argue that federal and state governments should boost support for women’s employment to build a broader recovery and avoid exacerbating economic inequalities between women and men.

Women were more likely to lose paid work during the pandemic because they are more likely to work in the “social consumption” businesses that were forced to scale down operations or close entirely during lockdowns. About two-thirds of hospitality and personal service workers, for example, are women.

Since lockdowns lifted, the employment bounce-back has been faster than expected. But it is still incomplete. In January, 55,000 fewer women were in work than before the crisis, and 9000 fewer men. Unemployment and underemployment remain too high for both women and men, and are expected to stay that way for years.

Most of the industries that continue to be affected by restrictions — higher education, tourism and hospitality, for instance — employ a majority of women. Prominent among the vulnerable groups that haven’t experienced a bounce-back are single parents, 80 per cent of whom are women.

The divergence between men and women at work has been compounded by a divergence at home. Women already did the lion’s share of housework, caring and other unpaid work. With many adults working from home during the crisis, and children learning from home, that load only grew. Everyone did more, but women, and especially mothers, took on a bigger share of the extra work.

More unpaid work means less time for employment and education. Many women reduced their paid hours, left the workforce altogether or stopped studying. These choices, made out of short-term need, have long-term ramifications for women’s earnings, careers and economic security.

What can be done? In the short term, governments must give priority to reducing unemployment and underemployment as quickly as possible. More stimulus is likely to be needed, and governments should take this opportunity to build a broader recovery.

The extra spending should be targeted to the sectors that are still struggling, many of which are major employers of women. This could include vouchers to encourage spending on hospitality, tourism and entertainment, and temporary expansions of social programs and services.

The federal government should also strengthen support for people who are still out of work. It should expand the JobMaker hiring credit and, as has been widely advocated, further increase the JobSeeker payment and Commonwealth Rent Assistance. This would boost economic activity, help unemployed people to look for work, and improve the living standards of Australia’s most vulnerable people, including single mothers.

As they focus on rebuilding in the longer term, governments should invest in the care economy to boost economic growth and improve the living standards of all Australians, while reducing women’s economic disadvantage. Making childcare cheaper is the most significant thing the federal government can do to support women’s employment. Investment in aged care is also urgently needed and would create jobs for women while improving the living standards of older Australians.

So far, the federal government has failed to meaningfully tackle the economic costs borne by Australian women in the Covid-19 recession. It should use the next budget, due in May, to ensure Australia really does build back better. •

Danielle Wood is Chief Executive Officer of the Grattan Institute, where Kate Griffiths is a Fellow and Tom Crowley an Associate.