Can Turnbull do a Menzies?

A former high-profile lawyer who rose rapidly in politics but was dumped as leader by his own party… Yes, Robert Menzies did bounce back, writes Norman Abjorensen 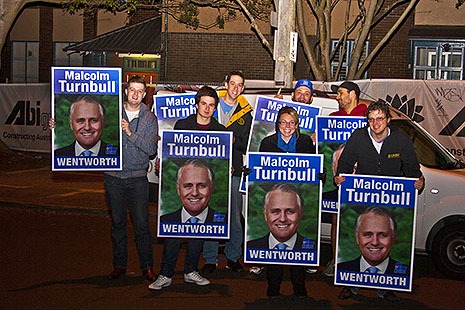 In 2007, the Liberal Party of Australia hit rock bottom and, for the first time in its six-decade history, found itself out of office virtually everywhere. Its most senior elected figure in the land was the lord mayor of Brisbane, Campbell Newman. But since John Howard was consigned to the wilderness there has been a marked resurgence in the conservative brand, with Labor vanquished first in Western Australia, then in Victoria and now in New South Wales. All three cases involved a state Liberal Party dominated by the right but led into government by a moderate. Is this an indication that voters approve of a conservative party only when it is under moderate leadership?

Robert Menzies, credited with being the driving force behind the establishment of the Liberal Party back in 1944–45, went to considerable pains to position both himself and the new party within the vast mainstream of Australian society rather than amid the vested interests with which its predecessor, the United Australia Party, was so closely identified. Menzies still casts a formidable shadow over the Liberal Party, so it was no coincidence that when elements of big business criticised Barry O’Farrell, as NSW opposition leader, for sitting on the fence over electricity privatisation he handed out a copy of Menzies’s 1942 “Forgotten People” speech. In that famous broadcast, Menzies argued that a non-Labor party should not be beholden to vested interests – unions on the one hand, the “rich and powerful” on the other – and should frame policy in the wider public interest.

At the time, of course, Menzies was in the political wilderness himself. To most observers, he looked like a man with a brilliant future behind him – a Victorian MP at thirty-four, he had risen rapidly through the ministerial ranks; forsaking Melbourne for Canberra, he immediately entered the federal ministry and – on the death of Joe Lyons in 1939 – became prime minister at the age of forty-four. Despite winning an election in 1940, he was driven from office by his own party room the following year and retired ignominiously to the backbench.

A lesser man might have called it quits, especially when he was already a highly regarded barrister who could have commanded the highest of fees at the bar. Against the taunts of his detractors, mostly from Sydney, that “you’ll never win with Menzies,” he set about the long, hard process of political rehabilitation, first reinventing himself and then designing and building a comeback vehicle, the Liberal Party. Menzies was prescient enough to know that the United Australia Party, wracked by dissension, was in terminal decline, a view shared by the electorate in 1943 when the party’s vote slumped to 16 per cent and just twelve members were returned to the House of Representatives.

The rest is history now. The new party failed at its first outing in 1946 but triumphed spectacularly in 1949, with Menzies staying on as prime minister for a term that ended only with his retirement in 1966, and the party itself remaining in office until 1972.

Part of the Menzies saga, at least in terms of his career, has a distant echo today in the person of Malcolm Turnbull, who might, just might, do a Menzies of sorts – and without having to create a new party. Once he lost the leadership in late 2009, by a single vote, to Tony Abbott, Turnbull was tempted to retire from the field. As a highly successful lawyer, then a banker and businessman, he didn’t lack post-political career options. But after announcing he was quitting politics he had an abrupt change of heart, recontested his seat in 2010, and is still hanging in. What’s more, the latest polls show he is more popular as a potential leader than the man who defeated him, Tony Abbott.

The circumstances of that leadership change are worth revisiting to understand more fully the dynamics inside the parliamentary Liberal Party. Turnbull had been left largely isolated in his party – and was being actively undermined – over his support for an emissions trading scheme. The conflict came to a head in December 2009, when forty-eight MPs, a clear majority, voted for a spill. In a three-way ballot, Tony Abbott topped the list with thirty-five votes, short of an absolute majority; Turnbull won twenty-six votes and Joe Hockey twenty-three. Of Hockey’s tally, seven went to Abbott in the run-off, fifteen to Turnbull and one was informal. What was remarkable was the fact that Abbott won the final ballot forty-two to forty-one, meaning that of the forty-eight who voted for the spill seven reverted to Turnbull when faced with the prospect of an Abbott victory.

What this suggests is that the wariness about Abbott, which first surfaced publicly in 2007 when he sounded out colleagues for a leadership run, was still there. He might have gone on to win over some of the doubters with his effective election campaign last year, but the doubts have returned over some of his recent tactics – especially his encouragement of the Tea Party–style rally in Canberra earlier this month, which was populist politics at its most blatant and placed him in very questionable company.

The Abbott style has always been that of the streetfighter. By its very nature, this can produce some spectacular successes. But it can so easily backfire, which always creates dismay among a streetfighter’s followers. More importantly, there is the perception that Abbott’s strident conservatism is too hard-edged for the electorate to accept – and this is where the party’s regeneration in the states becomes a key factor. Do the Liberals need a moderate leader rather than an all-out “conviction” leader who comes unapologetically from the party’s hard right?

With Joe Hockey apparently destined to remain the lightweight pretender, this leaves Malcolm Turnbull as the most eligible moderate. Admittedly, a comeback looks a remote possibility from the perspective of Abbott’s near miss in 2010, but if there’s any sense that Abbott is floundering in the polls or making further political miscalculations then that possibility may well come into play.

No one who knows Malcolm Turnbull believes for a moment that he is there simply to carry a spear for another general. His every word is worth watching closely; he is far from the forgotten man. •

Norman Abjorensen is a Visiting Fellow in the Policy and Governance Program in the Crawford School at the Australian National University.