Europe offers lessons for Australian parties uneasy at the prospect of having to talk to each other, says Tim Colebatch 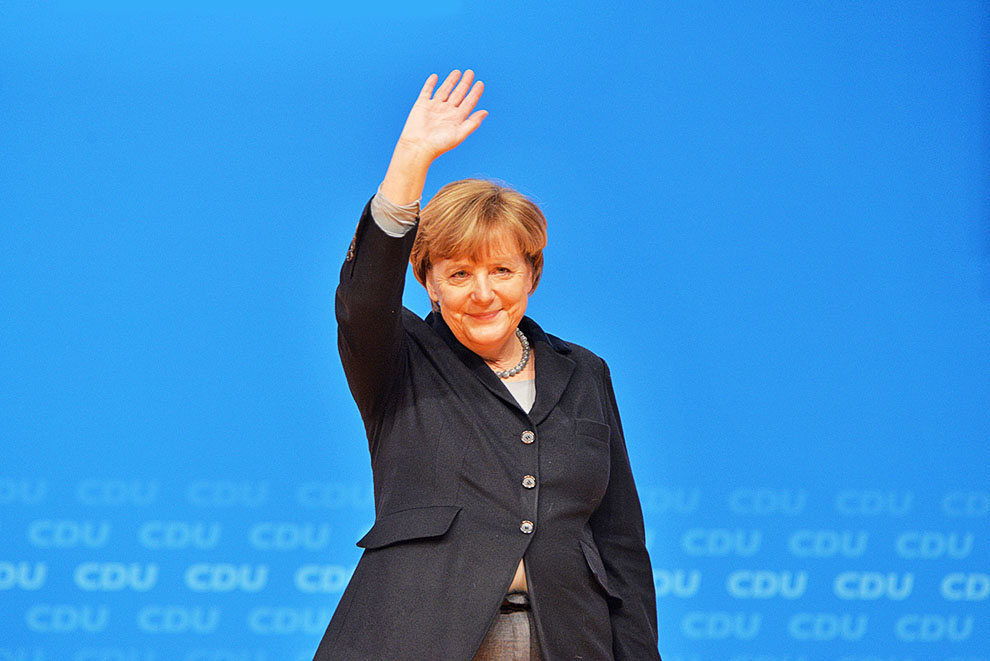 Caravan of chaos? Angela Merkel’s government is a “grand coalition” between her Christian Democrats and their main rival, the Social Democrats. Olaf Kosinsky/Wikimedia

In the week that Malcolm Turnbull called the 2016 Australian election, another conservative leader on the other side of the world did what his Australian counterpart has been saying he will never do. Thomas Strobl, chairman of the Christian Democrats in the dynamic high-tech southern state of Baden-Württemberg, agreed to join with the Greens in a coalition government.

It wasn’t too much of a shock. Coalitions between the Greens and the Christian Democrats – Germany’s version of Australia’s Liberal Party – are not new in German states and cities. Indeed, there’s a successful one across the border in the state of Hesse, which includes Germany’s financial capital, Frankfurt. What made Baden-Württemberg different was that the Christian Democrats were joining as the junior partner in a government led by the Greens.

Surely it will be an unstable coalition – a caravan of chaos, as Scott Morrison warns us?

Probably not, for governments in Germany are almost always formed by coalitions between political rivals. It’s like that in much of Europe. It’s like that in New Zealand. And there are lessons that all parties in Australia should learn from them.

The bookies now have the Coalition at almost unbackable odds to retain government. A minority government, or “hung parliament,” is rated as only a one-in-four chance. And while the polls suggest those odds are right, it would take only a small shift in votes and/or some surprise wins by the Nick Xenophon Team for the Coalition to lose the net fifteen seats that comprise its majority.

It is certainly possible that neither the Coalition nor Labor will emerge with a majority. That’s why Turnbull and Morrison and some of the Coalition’s media supporters have been so insistently warning us that minority government means chaos, and that we must therefore vote to give them a stable majority. And it’s why Bill Shorten swears hand on heart that Labor won’t do a deal after the election with the Greens, Xenophon or independents.

But neither Turnbull nor Shorten will tell us what would happen if they emerge as the largest party but without a majority. Would they send us back to the polls again? I suspect most Australians would rather they sat down and negotiated a solution.

That’s a perfectly normal process in Europe. Apart from one four-year term in the 1950s, every federal government in Germany has been worked out after the election in negotiations between the rival parties. Angela Merkel’s government is a “grand coalition” between her Christian Democrats and their main rival, the Social Democrats (Germany’s Labor Party).

It’s even more mixed up at state level: fifteen of the sixteen German states have coalition governments, and they’re made up of ten different combinations of parties.

If coalitions between opposing parties were unstable, as Malcolm Turnbull and Scott Morrison insist, that would mean chaos. But Germany is not in chaos, it’s a success story: a stable, well-functioning democracy.

In the past decade, despite all the problems of its neighbours, growth per head has averaged 1.5 per cent a year in Germany, compared with 1 per cent in Australia. German unemployment (as we define it) is just 4.2 per cent nationally; in Baden-Württemberg it is less than 3 per cent, about half the rate in Australia. And that’s under a Green-led government.

Why does Germany have so many and such diverse coalition governments? And how does it make them work, when our parties seem unable to cooperate on anything?

Three big differences explain it. First, elections in Germany are decided by proportional representation: any party gaining 5 per cent of the vote wins seats according to its share of the vote. The right usually governs alone in the big southern state of Bavaria, but nowhere else. The average election sees five parties emerge with a share of the seats, and a combination of arithmetic and ideological common ground decides who ends up in government.

Second, most German parties belong at least partly to a wide, inclusive centre. There are ideological differences, of course, but they are more muted than here. Germans have tried extreme ideologies of left and right in the past, and they left bitter memories. Most of their parties today, even the Greens, are pragmatic and inclined to negotiate compromises with their opponents rather than try to wedge them.

(The Greens had a lengthy power struggle back in the ’80s between the fundis – fundamentalists – and the realos – realists – that saw the realos end up decisively in control. In Australia, the battle seems to still be on, especially in New South Wales.)

Third, though, come the two German parties that are outcasts from that inclusive centre. With the other parties anxious to build successful coalitions without them, they make the arithmetic important.

One is The Left, which at its core is the successor to the old communist party of East Germany. It still retains considerable support there (which suggests that many people in the East didn’t think communism was too bad), heading one state government and participating in another. But the Christian Democrats refuse to enter a coalition with The Left, and the Social Democrats do so only if there is no feasible alternative.

The other outcast is the rising new force of right-wing protest, the Alternative for Germany. It has become the third force in German politics by riding the wave of hostility to immigration from Europe and the Middle East. The established parties place high value on racial tolerance, which means the Alternative has no allies.

That explains why the Christian Democrats, Social Democrats and Greens now form a Kenya coalition in the eastern state of Sachsen-Anhalt. The election in March saw the Alternative emerge as the second-biggest party, winning twenty-four of the eighty-nine seats. The Left won seventeen. That left the other three parties with just forty-six seats between them, so any viable majority government had to include all three of them.

In Baden-Württemberg, the Greens had been governing in alliance with the Social Democrats, their usual ally. But the March election saw the Alternative take 15 per cent of the vote from both major parties. The Greens prospered, but the Social Democrats lost so many seats that the only viable solution was for the Greens to join forces with the Christian Democrats.

It helped that the Green premier, Winfried Kretschmann, a communist in his youth, is now sixty-eight, a Catholic, and as firm on supporting business as he is on defending the environment. He and the Christian Democrats negotiated an agreement to prioritise spending in four areas: faster broadband, better transport and university infrastructure, more police and more renewable energy plants.

What does the German example tell us? Coalitions are not inherently unstable or chaotic. In fact, Germany confirms on a far wider scale the lessons Australians could draw from our own limited experience of them.

What was chaotic about the Gillard government was the internal instability caused by the rivalry between Julia Gillard and Kevin Rudd, along with a range of political errors made by its leader and key ministers, and Tony Abbott’s war on virtually all its key legislation. Apart from Gillard’s decision to breach a clear election promise and levy a carbon tax, none of these destructive forces had anything to do with the fact that this was a minority government supported by the crossbenchers. Much of the chaos would have occurred even if Labor had been a majority government.

The Liberals and Nationals themselves ran a minority government in New South Wales from 1991 to 1995 – lest we forget, a government dependent on the support of a New England independent named Tony Windsor. Yes, there was chaos in that government, but it had nothing to do with Windsor; the premier, Nick Greiner, was brought down by his own political errors, and those of a key minister.

Sure, Tasmania has had Labor–Greens coalitions that didn’t work – although the last one lasted almost its full term. But a similar coalition has proved stable over the last eight years in the Australian Capital Territory, whatever you think of its decisions. And in South Australia, Labor now has a majority, but it has kept two independents in the ministry; that too has proved a stable government.

Across the Tasman, every New Zealand government has been a minority government since Kiwi voters decided to switch to proportional representation in 1993. They’ve seen a succession of stable and successful coalitions, far more stable than Australia’s single-party governments, which have seen four prime ministers overthrown by their own side in twenty-five years.

Turnbull and Morrison know that their claim that minority governments are inherently unstable and disastrous is phoney. They’re just saying it to win our votes. If the voters deliver a hung parliament on Saturday, both sides ought to be pragmatic.

They might start by reading Alain de Botton’s essay about what makes marriages work, published recently in the New York Times. It has lessons for politicians, too:

If the votes on Saturday don’t come out quite as expected, our political leaders will have to learn how to become good at handling disagreements and tolerating differences with generosity. •

Tim Colebatch is a regular contributor to Inside Story, and former economics editor, columnist and foreign correspondent for the Age.