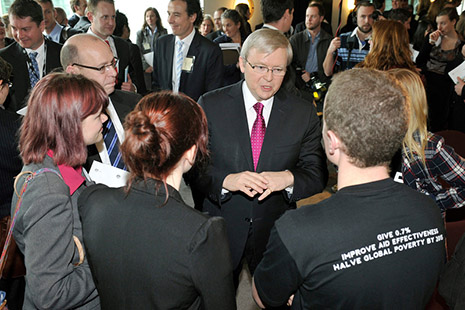 IT’S BEEN a fortnight since the report of the Independent Review of Aid Effectiveness was finally released to the public, together with the federal government’s response. The review managed to be strong yet cautious, an amazing balancing act of political tact for which the panel should be commended.

This is an aptly timed review, with the aid program facing a massive scale-up to a heady 0.5 per cent of gross national income by 2015–16 from 0.35 per cent this financial year. While 0.5 per cent is still well short of the 0.7 per cent adopted by the General Assembly of the United Nations in 1970 – a figure with obscure current relevance except as a useful advocacy tool – it is certainly heading in the right direction. The massive expansion in Australia’s aid program enjoys bipartisan support, a rarity in the current political climate. Both political parties realise that Australians can and should be more generous to those far less fortunate than us. And Australia is generous. Despite falling short of the 0.7 per cent target, Australia is the twelfth biggest donor of official development, punching above its weight as the world’s seventeenth biggest economy (according to purchasing power parity).

The debate continues to rage as to whether aid has done any real good in the countries in which it is spent. Critics of Australian efforts often point to the continuing and widespread poverty that prevails in our second-biggest recipient country, Papua New Guinea, despite over $15 billion in aid since independence. But most indicators are moving in the right direction. For example, World Bank data shows that life expectancy – a critical measure in anyone’s eyes – has increased from forty-seven years in 1975 to just over sixty-one years in 2009. While the picture in Papua New Guinea and other recipient countries may not be all rosy, we suffer from a lack of a counterfactual – that is, what would have happened if those millions of dollars had not been spent? The situation could well be far worse.

But Australia does need to do a better job in making sure our money is spent wisely and is improving the lives of the impoverished as best it can.

Sceptical commentators like Hugh White are right to argue that economic growth is the key to bringing people out of poverty, but in doing so they mix up cause and effect. Economic growth is the combined and measurable effect of a country’s many complex social and economic interactions, in which aid is merely one of many factors. Honest advocates of aid spending cannot pretend that aid is the answer to all problems. But, like government spending in our own country, government spending in other countries via aid can be an important part of the answer. As the review panel member Professor Stephen Howes suggests, more important than arguing over the current efficacy of aid is to investigate how our aid money can be spent more effectively in the future.

Primarily this means getting value for money by targeting those areas where Australia can “make a difference,” as the review rightly concludes. But it also notes that Australia does not focus its efforts well, with programs that cost over $200,000 a year currently being run in eighty-eight countries. Under Labor leadership, country programs have also spread to Africa and Latin America. This scattergun approach spreads our aid money thinly on the ground, creating a huge knowledge burden on rapidly rotating AusAID staff and limiting our effectiveness.

While Sub-Saharan Africa contains the most recognisably distressing poverty on the planet, it is not a place where Australia has any considerable experience running country-level programs. There are plenty of wretchedly poor people in dire need in South Asia, where Australian knowledge and experience is far greater and we are better placed to effect real improvements. Latin America is even less impoverished and equally removed from our national interest as Africa, and the review suggested that the country programs there be discontinued. However, the government's disingenuous response was to agree to support the status quo.

Of course, this raises the question of why the government wants to keep an Australian finger in every pie. Cynics would argue that aid sweeteners are being used as part of the grand strategy for securing a seat on the United Nations Security Council in 2013. Yet Kevin Rudd is sure to be aware that piecemeal aid projects are not likely to win over any but the most dependent recipient countries. The more likely explanation is that Rudd wants Australia to be seen by the world as a global player in the business of giving aid, and this means buying a seat at every table.

Active middle-power diplomacy has been a hallmark of Australian foreign policy under previous Labor governments, and should not be discouraged. But international aid should be used only sparingly and selectively in pursuit of the national interest, and then only where it will actually leverage actual influence. After all, being the “good international citizen,” a hallmark doctrine from the Gareth Evans era of foreign policy that Labor still harkens to, is also about being seen to be doing good – for the right reasons.

This leads us to the perennial debate about whether the national interest should have any place at all in an aid program. Australia is being transparent when it states explicitly that its aid program has the twin objectives of furthering the national interest while reducing poverty. This is not the difficult balancing act so many make it out to be. Acting in Australia’s interest is not inherently incompatible with altruism, and is in fact usually indivisible from it. If Australian values include providing for those in need, and giving everyone a fair go at life, then this is the national interest.

The current aid program faces many challenges in the coming years as it rapidly expands. As the review’s report so comprehensively reveals, while Australians have an aid program that has its flaws, it is an aid program doing its best to improve people’s lives around the world – an aid program we can be proud of. •

Good news from the News of the World

Steady concentration has been a feature of the Australian media landscape; the legislative challenge is to take advantage of the shift in sentiment, argues Tim Dwyer

Rupert Murdoch appearing before the Culture, Media and Sport Committee in London on 19 July. Ben Terrett/Flickr 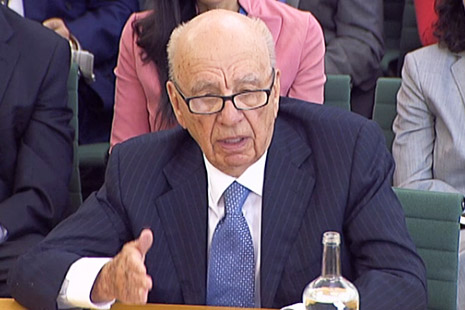 Rupert Murdoch appearing before the Culture, Media and Sport Committee in London on 19 July. Ben Terrett/Flickr