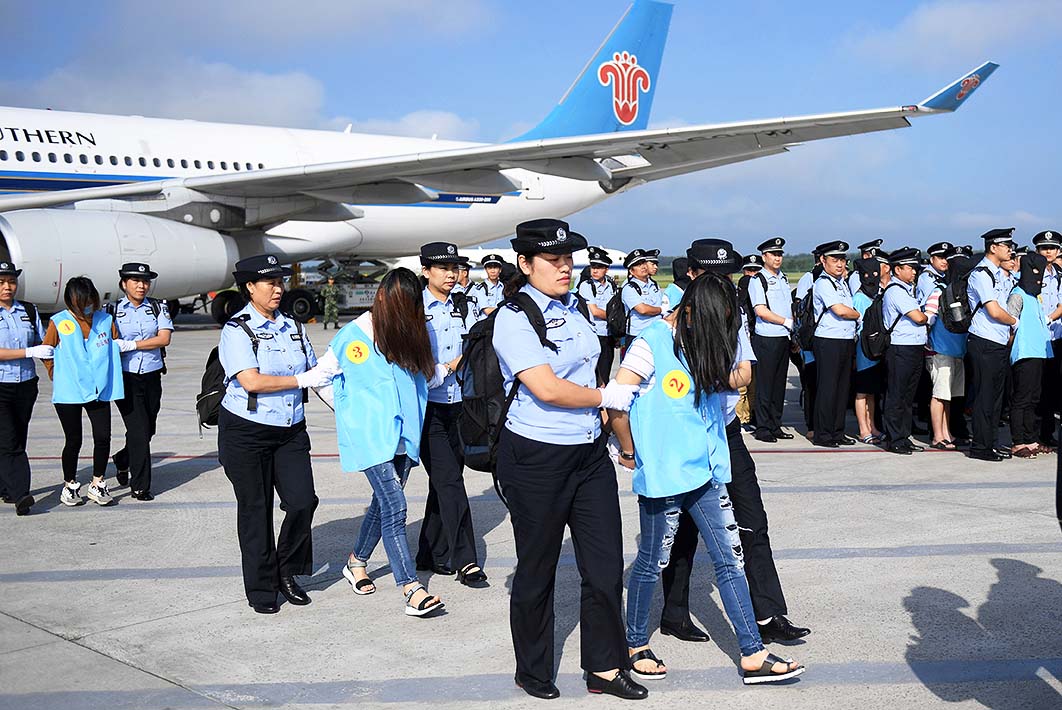 Trial by media: some of the seventy-seven Chinese brought back from Fiji, shown here at Changchun Longjia International Airport, in Jilin Province, on 5 August this year. TPG/Getty Images

When news broke two months ago that seventy-seven Chinese nationals had been deported from Fiji on a China Southern aircraft, the pictures seemed to tell the whole story. The criminals, said to be involved in a massive telecommunications fraud targeting people all over China, were marched onto the plane in Nadi, with black balaclavas over their heads and a police officer on each arm.

Without access to independent sources, wire services carried the Xinhua News version of events in its entirety and even “liberal” newspapers in China simply ran the official line, without adding any detail. The facts, as presented, seemed believable, and coincided with the arrest of hundreds more Chinese and Taiwanese nationals said to be involved in online and telephone fraud in Indonesia and Cambodia. Other Pacific nations quickly registered interest in having Chinese police round up shady Chinese nationals in their countries.

But Hagar Cohen’s report on this week’s episode of Radio National’s Background Briefing makes the remarkable allegation that most of those deported weren’t hardened scam artists but teenage girls “who were brought to Fiji as sex workers.” The extent of the prostitution industry in Fiji is not a matter of contention; even the thoroughly tame Fiji Times reports that “Fiji Police are aware of local operations but seem either ignorant or quiet on the issue of Asian, mainly Chinese, prostitution which happens in a much more organised manner.”

Scams of the type described in Chinese media are also real, and other raids in China and Southeast Asia carried out alongside the Fiji operation could have been entirely genuine. But a search of images used in domestic and Chinese media reveals that hoods weren’t used to disguise the identity of suspects in those cases. In Indonesia, where Taiwanese nationals were also rounded up, they were even made to wear different coloured t-shirts according to where they had been found. There are some women in the images, but not teenage girls.

The handful of images taken of the Fijian seventy-seven before they were hooded supports Background Briefing’s claims. The lack of photos taken during the operation in Fiji, in sharp contrast to the Indonesia and Cambodia round-ups, points to the efficiency of the Fijian state in controlling the media and the message (which will be the subject of next week’s Background Briefing). But one post on the ever-scurrilous Fijileaks site a few days after the arrests suggests word is leaking out:

There goes my weekly massage at HAPPY FEET, Suva. The girls there can do a lot more than online fraud. I think I’ll find RFMF [The Republic of Fiji Military Forces] giving the massage there now.

Leaving aside whether the program’s allegations turn out to be verifiable, the question remains: why is China conducting expensive, high-profile arrests in far-off lands? Police in China are absurdly underfunded, and crime researchers paint a picture of spiralling crime rates alongside systematic falsification of crime figures. In a recent interview with the Little Red Podcast, criminologist Borge Bakken argued that 97.5 per cent of crime in the city of Guangzhou is simply not reported in the official crime statistics. One of the great ironies of these show arrests is that the Chinese police were given more power in Fiji than they usually wield in China. One of the greatest problems Chinese police face is that their forces answer to local authorities and often protect local criminals — even child kidnappers — sought by law enforcement agencies from outside their bailiwick.

Given that the average cop in China has one of the worst jobs in the world — to the point that they have shorter lives than nearly everyone else in China — why is Beijing sending a hundred of them to Fiji to sit in a plane with hooded teenage girls? The answer is in plain sight. Just as you can glean what the Communist Party of China thinks by parsing the front page of the People’s Daily, so too can insights be gleaned from the text that accompanies the Fiji arrests, which no media outlet in China has deviated from. The final paragraph reads:

A Ministry of Public Security official said that in recent years there has been an increasing incidence of telecommunications network fraud. The masses have an implacable hatred for this plague on society. The public security agencies will strike hard, strengthen international law-enforcement cooperation, continue to forcefully rectify this problem and resolutely rein in the high incidence of such crime. Above all, the police will preserve the security and legitimate rights and interests of the masses.

The message: we know this is a problem, but don’t worry, we’re doing something. We will go to the ends of the earth to track down these criminals.

A similar message is carried by officially approved pop culture. Wolf Warrior 2, which has broken every Chinese box office record, has China’s muscular security forces (in the form of one man) willingly going to the ends of the earth to ensure the safety and lawfulness of Chinese citizens abroad. The film’s trailer gives a taste — it’s Top Gun without the homoerotic tension but with foreign mercenaries, dodgy locals and corrupt Chinese as villains. If you miss it, try Netflix police drama When a Snail Falls in Love, in which Myanmar provides a similar backdrop for Chinese police heroics.

Show arrests in Fiji and elsewhere serve a domestic propaganda agenda; even the nature of the crime can be fabricated. Arrests like these ones, carried out with the host nation’s media outlets and legal system sidelined, should be treated with the same scepticism we apply to show trials. China’s police forces lack the capacity to conduct investigations based on collecting forensic evidence or eyewitness testimony. The Chinese justice system continues to rely on prolonged pretrial detention. Convictions are based on confessions extracted through torture when needed, and the acquittal rate is less than 0.1 per cent, even after a concerted campaign to stamp out wrongful convictions.

Regardless of who was sitting under those hoods, this is the justice system those on the flight from Nadi to Changchun were delivered up to. This should give pause to those who think ratifying an extradition treaty with China is a smart move. •

Graeme Smith is a Research Fellow in the Department of Pacific Affairs at the Australian National University and host of The Little Red Podcast.

Dr Gillespie and the substitute statute 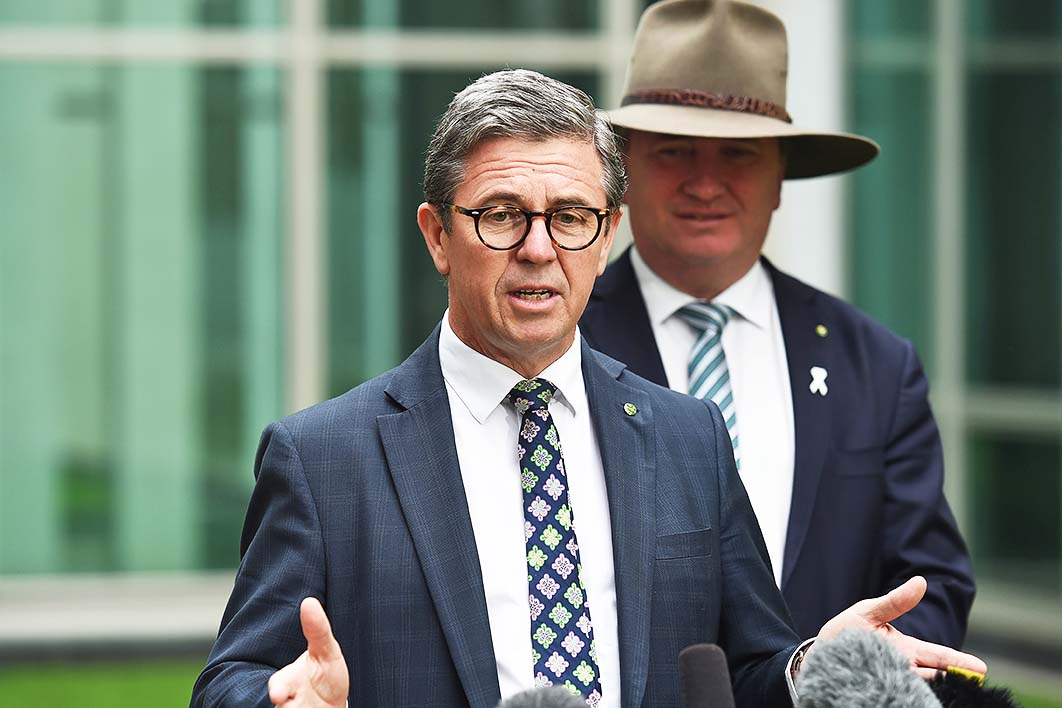