What the Republican Party is attacking is democracy itself 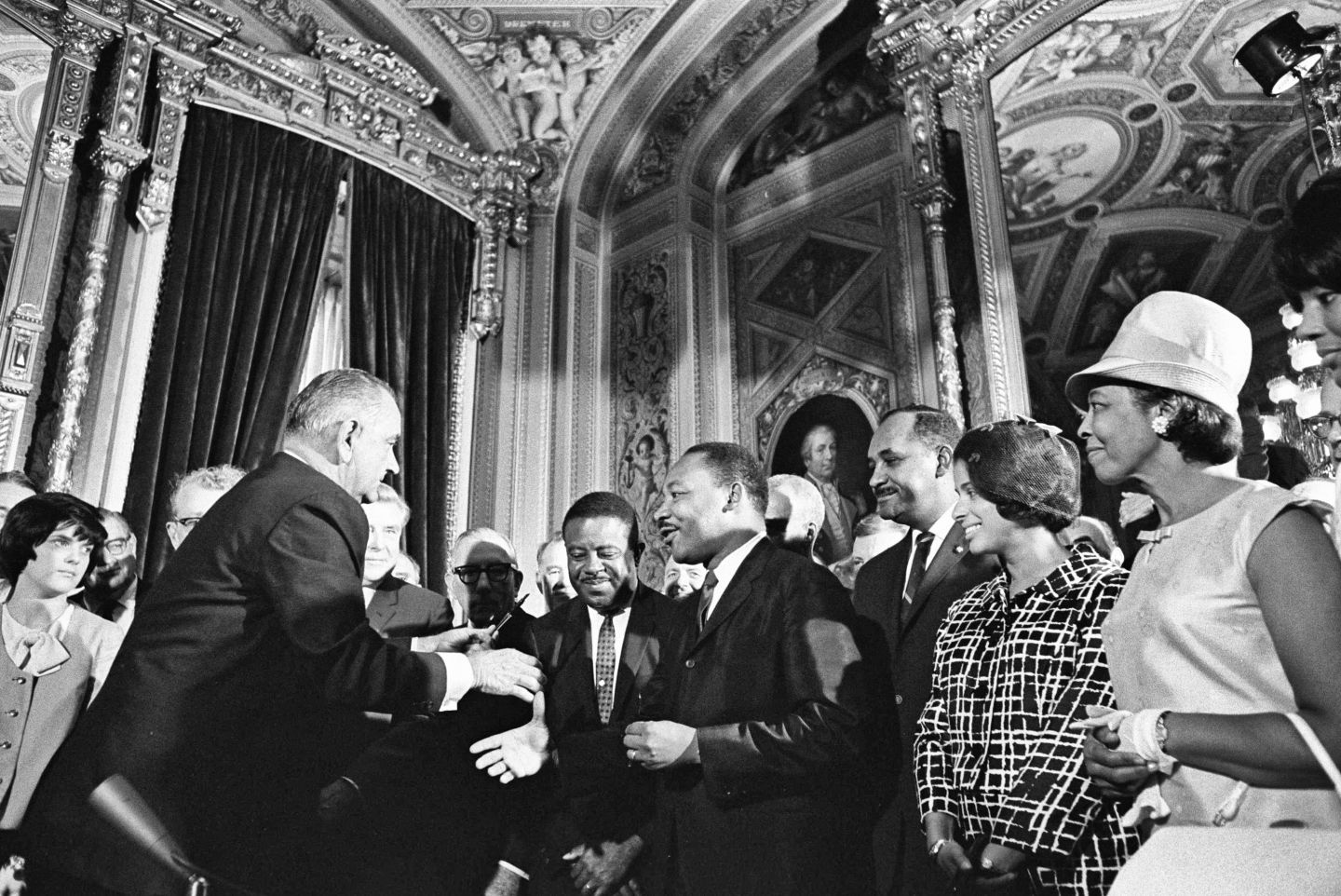 Democratic revolution: president Lyndon B. Johnson with Martin Luther King at the signing of the Voting Rights Act in August 1965. Niday Picture Library/Alamy

In California, the Republican Party has set out a series of fraudulent ballot drop boxes, hoping to entice unsuspecting voters into accidentally throwing away their ballot. In Texas, the governor ordered real ballot drop boxes to be winnowed to one per county, leaving Harris County’s four million–plus residents with a single early-voting site. In Michigan, courts have once again changed the state’s mail-in ballot deadline, moving the cut-off date from mid November to 3 November amid the Trump administration’s efforts to slow the postal service and shake voter confidence in mail-in voting.

Worried that a record turnout of voters is trending Democratic, Republicans across the country have been running a series of shadow campaigns: while candidates lobby for people’s votes, lawyers and activists lobby for those votes not to be counted.

The pandemic has forced these campaigns into the open, with the desperate scramble to limit the franchise clashing with voters’ demands for more ways to cast their ballots in the midst of a public health emergency. But the Republican campaign to shrink the electorate stretches back decades as part of a growing anti-democratic strain that now defines the party.

To understand how this anti-democratic politics emerged, it’s first necessary to understand how Americans came to embrace broad democracy. That story can be told as a slow expansion of the vote — first, to unpropertied white men in the 1830s, then to Black men in 1870, women in 1920, and Indigenous Americans in the 1950s. But formal enfranchisement didn’t mean people could actually cast a ballot. For most Black Americans, for instance, a series of laws backed by violence made voting next to impossible until the 1960s.

In that decade, two things happened: the Voting Rights Act of 1965 empowered the federal government to protect voters who had been discriminated against, and the Supreme Court developed its “one-person-one-vote” doctrine that said, generally speaking, one person’s vote shouldn’t be more powerful than another’s. These changes marked a democratic revolution, and Americans increasingly came to expect universal and equal franchise: the notion that every citizen has an equal right to vote.

For a Republican Party increasingly reliant on white voters in a rapidly diversifying country, this was a problem. In the early 1980s, they began pushing back against expanded voting rights by complaining about “voter fraud,” arguing that new measures had to be put in place to make voting more secure. If fewer people voted as a result, well, that was the price Americans must pay to have confidence in their elections.

How that played out on the ground was not so neutral. In 1981, the Republican National Committee sent a “National Ballot Security Task Force” to Black and Latino neighbourhoods in New Jersey. This group of armed off-duty police officers plastered the neighbourhoods with warnings that they were hunting fraudulent voters, and then appeared at polling sites and challenged Black and Latino voters to show their voter registration cards. This voter-intimidation scheme was so blatant that the Republican Party was forced by the courts to enter a consent decree, in which it agreed not to intimidate voters at the polls. (That decree expired a few years ago.)

The Republican voter-disenfranchisement project gained new energy in 2010, when huge victories put Republicans in charge of state houses across the country. Conservative legislatures introduced hundreds of laws to restrict ballot access, including strict voter ID laws that required voters to pay significant fees for required documents. Republican secretaries of state also purged voting rolls and closed polling sites in minority neighbourhoods, leading to the hours-long lines that have become a standard part of American elections in the past decade.

The courts, too, have played an increasingly pivotal role in voting restrictions. Most important, in 2013 a conservative Supreme Court gutted the 1965 Voting Rights Act, ending most protections for voters in states that have historically discriminated against minority voters. Legislators in those states rushed to pass new restrictions following that ruling. And now in 2020, appeals courts packed with Trump appointees have stayed most efforts to make voting easier during the pandemic. (This year has already seen more than 350 court cases over ballot access and deadlines, meaning the courts are playing an outsized role in this election.)

This may all seem like rough-and-tumble politics, political parties fighting for whatever advantage they can get on election day. But even setting aside the ethical component of that argument — disenfranchising voters is more than a political tactic, it’s a violation of a fundamental right — a broader political development is worth mentioning. Republicans have increasingly adopted policies and positions attractive to a shrinking minority of voters in the United States. Along with voting restrictions, they have begun to explore ways to limit democratic representation more broadly.

Nothing is more emblematic of the GOP’s anti-democratic strain than calls to repeal the 17th Amendment. That amendment allowed for the direct election of senators, who, for the first century of US history, were selected by state representatives. The Senate had been constructed that way so it could serve as a firewall against popular democracy.

By the early twentieth century, though, Americans had come to see the Senate as a corrupt body of self-dealing politicians with no accountability. So they amended the constitution to enable the people to directly elect their senators. In recent years, a growing number of writers and politicians on the right have begun to complain about this amendment. Just last month, Republican senator Ben Sasse penned an op-ed calling for it to be repealed. There had been, he decided, just too much democracy, which was a bad thing for the American people.

In the midst of all this, a countervailing force has emerged: a new voting rights movement. This movement began receiving national attention in 2013, when the “Moral Mondays” movement emerged in North Carolina in response to a radically conservative Republican legislature’s stripping of voting rights and democratic representation from Democrats across the state.

The voting rights movement has had an impact. Not only are Americans far more aware of the efforts to limit voting rights — and the reality that voter fraud is vanishingly rare — but Democrats winning control of state houses in recent years have instituted reforms that make it easier to vote: automatic voter registration, no-excuse absentee voting, and even felon enfranchisement.

That last move has had a massive impact. A number of states strip people convicted of felonies of their right to vote, even after they have served their sentences. Given the racial disparities in the criminal justice system, this had disenfranchised enormous numbers of Black men in many states. In Tennessee, for instance, more than 20 per cent of Black people had been stripped of their right to vote. Thanks to reforms by Democratic legislatures and voter initiatives, people with felony convictions are in the process of having their voting rights restored in several states.

The fight over which ballots count in 2020 is likely to continue past election day, as Republicans attempt to win in courts and counting rooms what they could not win at the polls. But this is not just a 2020 problem. The major parties disagree about a very basic democratic principle: that all citizens should have the right and ability to vote, and that their votes should be equally counted. That fight, over the desirability of democracy itself, will go on for years to come, and Americans who believe in democracy will have to grapple with what it means that theirs is not a broadly shared faith. •

Lessons from the lockdown

Is Melbourne emerging from its second lockdown wiser than it went in? 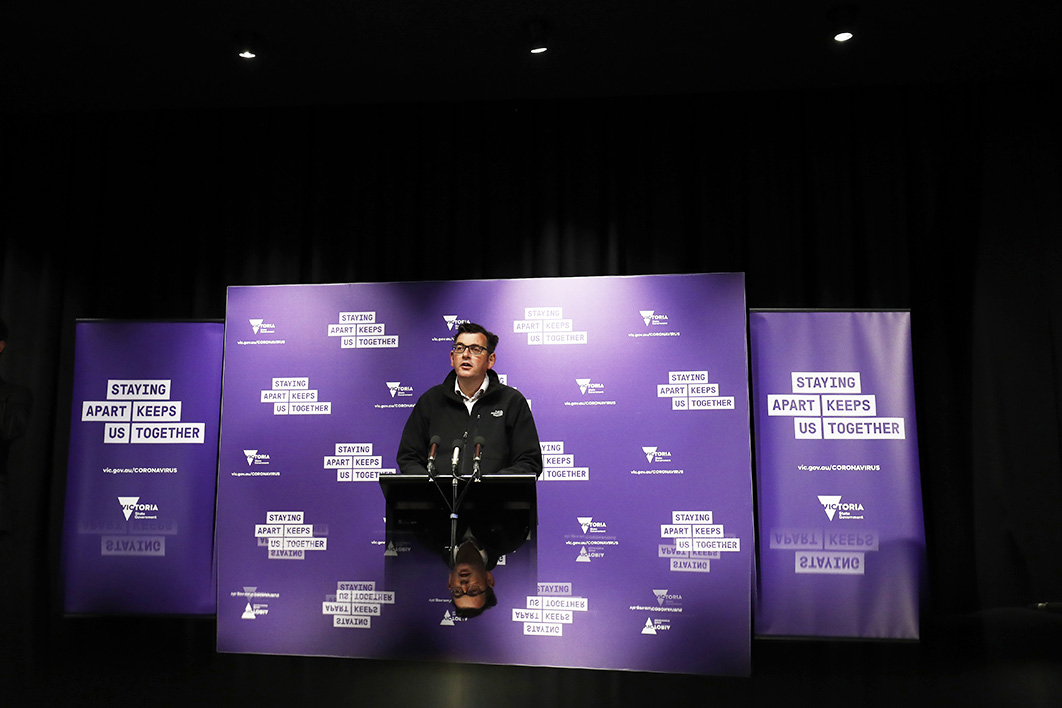