GetUp! has scored an unexpected victory in the High Court, giving an extra 100,000 people a chance to vote on 21 August and opening up the debate about the right to vote, writes Graeme Orr 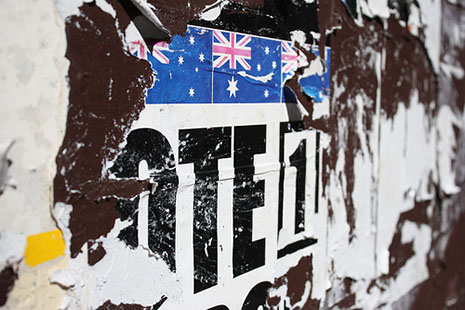 FOUR YEARS AGO, in controversial circumstances, the Howard government legislated to close the electoral roll significantly earlier once an election was called. After the election campaign formally began, new voters had only until 8pm on the day the electoral writ was issued to lodge their enrolment form. Those voters who needed to update their addresses were allowed a bare three days. Given that our quaint Westminster heritage gives prime ministers the right to call an election when it suits them, it was hardly a democratic measure. New Zealand electors, for instance, can enrol up until polling day. Canadians can enrol on polling day.

Early roll closure did not even have the support of electoral bureaucrats. In the past, the Australian Electoral Commission, or AEC, has handled hundreds of thousands of roll changes in the first week of the campaign, and uncovered no systemic attempts at fraudulent enrolment. But an attempt by Labor to reverse the 2006 legislation was blocked by the Senate and this month’s election kicked off under the Howard-era rules.

Barely a fortnight ago, the progressive lobby group Get Up! launched a challenge to this law. The case is named after the test-case plaintiff, Shannen Rowe. As if to show the other branches of government that leisurely approaches are inapt when fundamental rights are involved, the High Court rushed the case on for hearing. And within a day it brought down its verdict.

The majority ruling in Rowe’s case has struck down early closing of the roll. Shrewdly, the head of Get Up!’s pro bono legal team, Ron Merkel QC, did not ask the Court to take a step into the unknown, so the Court has not ruled that enrolment cut-off days are entirely unnecessary, as in Canada. Nor has it ruled that in a 24/7 society paper-based enrolment is unreasonable. Instead the law has simply jackpotted back to the pre-Howard rule, dating back to 1983, that electors have seven days’ grace to organise their enrolment.

The immediate effect is that approximately 100,000 enrolments will be processed that otherwise would have lain in abeyance. Some of these are not new enrolments: just a matter of getting people into their correct electorates. The figure could have been much higher: we will never know how many people were deterred from trying to enrol because they thought they were too late.

The longer-term effects of the decision are hard to assess. The Court rushed down its orders, but will take some weeks to craft its reasons. It is not yet clear whether the majority was a clear or paper-thin one. Unless four judges agree not just on the outcome but also on the basis for it, the case may be confined to roll closure rather than influencing future disputes over voting rights.

By judicial standards, the Court is full of relatively new members. As in some other key cases, one suspects a plurality opinion, if not a single majority opinion, will be crafted around the Court’s older, centrist judges, Justices Gummow and Hayne.

Regardless, the outcome is surprising. The High Court can be hard to predict, but in recent years it has generally been conservative in methodology and outlook. Until four years ago, it was not even clear that the Constitution protected the universal franchise at all, let alone the machinery that gives it life.

It took another piece of Howard government overreach – the disenfranchisement of all prisoners – to stir the sleeping giants on the bench. In a case involving an Indigenous prisoner, Vicky Roach, a majority finally agreed with old and long-gone Labor judges, such as Lionel Murphy and Edward McTiernan, that the rule that federal parliament be “chosen by the people” means that parliament may only limit the franchise in ways that are reasonable or proportionate to representative democracy. The result of Roach’s case was not radical. Only “short term” prisoners benefited from that ruling.

But Roach’s case, along with the political broadcasting, or ACTV, case of 1992, gives the Court a backstop role. It has no place micro-managing electoral law, but it has reserved to itself a power of veto over unnecessary restrictions on voting rights or political communication. To what extent do such rulings empower the judicial branch over others? Discussion from the bench in Rowe’s case suggests that at least one judge is interested in the very American idea of applying “strict scrutiny” to legislation that affects fundamental political rights at least where parliament may be motivated by self-interest.

None of this means the Court is boot-strapping a Bill of Rights, however, let alone turning itself into a vanguard of the civil-rights movement, like the Warren Court in the United States. The Australian judicial tradition of deferring to parliamentary expertise or discretion remains immanent in many other decisions. The majority opinions in Rowe’s case will probably be narrowly crafted.

They will highlight the fact that early roll closure was not evidence-based legislation: the Howard government merely asserted a risk of fraud, without giving reasons or evidence to support itself. The opinions will also rely on the fact that Australia does not have fixed parliamentary terms.

Some judges will point to compulsory enrolment and voting as a reason to ensure that enrolment procedures are not too burdensome. Contrarily, it is likely that judges in the minority will take the conservative view that compulsion should work the other way – that it is the individual’s responsibility to maintain their enrolment, and giving them thirty-five out of thirty-six months in an electoral cycle is plenty of time.

Curiously, the Commonwealth did not argue the case by analogy with United States law. There, despite a much stronger judicial interest in voting rights, the Supreme Court has accepted registration cut-offs of between thirty and even fifty days. Perhaps the Commonwealth thought that appealing to American practice in electoral legislation would not smack of best practice. Perhaps their lawyers reasoned that the United States has fixed terms and primaries, so electors have year-round notice of when elections are due. Or perhaps in the hurried hearing, they simply overlooked comparative law.

What does the case mean politically and institutionally? Julia Gillard rushed to an election, which she announced back on Saturday 19 July. She could have delayed the writs – and hence roll closure. Indeed for a long time that was the practice in Australia. Prime ministers of old would delay issuing the writs from anywhere between five and sixty-three days. Gillard did not. She wanted the writs out urgently to give the opposition the shortest possible campaign (thirty-three days), a decision she may now be regretting.

Nonetheless, in enrolment terms the Labor government has now had its cake and eaten it too. It got the short campaign it thought it wanted, and yet is getting back some of the first-timers who would have missed out on a ballot but for the High Court. The AEC has even said it will phone or contact every lucky enrollee affected by the decision.

There has been speculation that the AEC and the government, as official defendants to the case, deliberately ran dead. While neither will be unhappy with the result, that speculation lacks credence. As an independent agency, the commission never takes a stand on the validity of the law it works under. And since the case was launched while the government was in caretaker mode, the solicitor-general would not have received riding instructions from any minister.

For civil society there is another lesson from this case. Australia does not have a strong history of civic associations using the law to run test cases or to keep law reform on the front-burner. Get Up!’s success may be changing this. It is also mounting a Federal Court case to argue that electronic submission of enrolment forms is permitted under legislation enabling “e-signatures.” [Graeme Orr’s analysis of the decision in that case, given on 13 August 2010, can be read here.]

Institutionally, the ball is back in the parliamentary court. If Labor wins the election, it is likely to push on with its preference – backed by an AEC concerned about the bigger issue of the million or so people “missing” from the roll – to implement automatic enrolment. New South Wales has moved in that direction for state elections, and Victoria also, at least for school-leavers. Unless those state trials tank, there will be pressure on the Coalition to stop simply saying “no” to any electoral modernisation. Victoria is going so far as to trial a form of election-day enrolment, by allowing unenrolled people to claim a provisional vote at the polling station. (“Provisional” on their entitlement to vote being checked.)

The number of electors who will benefit from the High Court’s decision is not insignificant. Yet spread across 150 electorates, they are unlikely to affect the outcome in any but the most ultra-marginal seat. The poll analyst Possum Comitatus, who blogs for Crikey, assessed early roll closing as costing Labor less than 0.1 per cent of the two-party vote. If so, its undoing will at most be worth a bit of extra funding for the parties (votes being worth $2.30 each), especially the Greens.

But political effect is not the point. In principle every vote is sacred and the whole purpose of the roll is accuracy and comprehensiveness, not being a hurdle to the ballot. The High Court has struck a modest blow for those principles. •

Graeme Orr is an Associate Professor in Law at the University of Queensland and author of The Law of Politics: Elections, Parties and Money in Australia (The Federation Press, 2010, forthcoming). He discussed the High Court decision with Damian Carrick on ABC Radio National’s The Law Report. (Disclosure: Graeme assisted the Get Up! legal team with research on US registration law.)

As Australian political records tumble, Rodney Tiffen looks at the pitfalls of poll-watching and the lessons of post-war Australian elections

Julia Gillard and treasurer Wayne Swan board the media bus in Sydney on 3 August, heading for a day of campaigning on the central coast. AAP Image/Alan Porritt 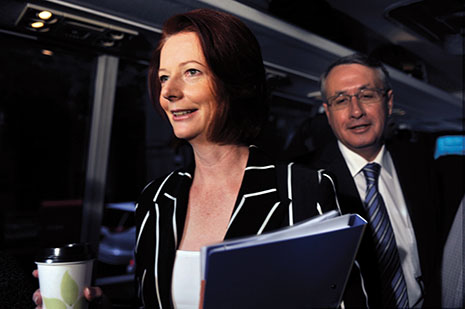 Julia Gillard and treasurer Wayne Swan board the media bus in Sydney on 3 August, heading for a day of campaigning on the central coast. AAP Image/Alan Porritt