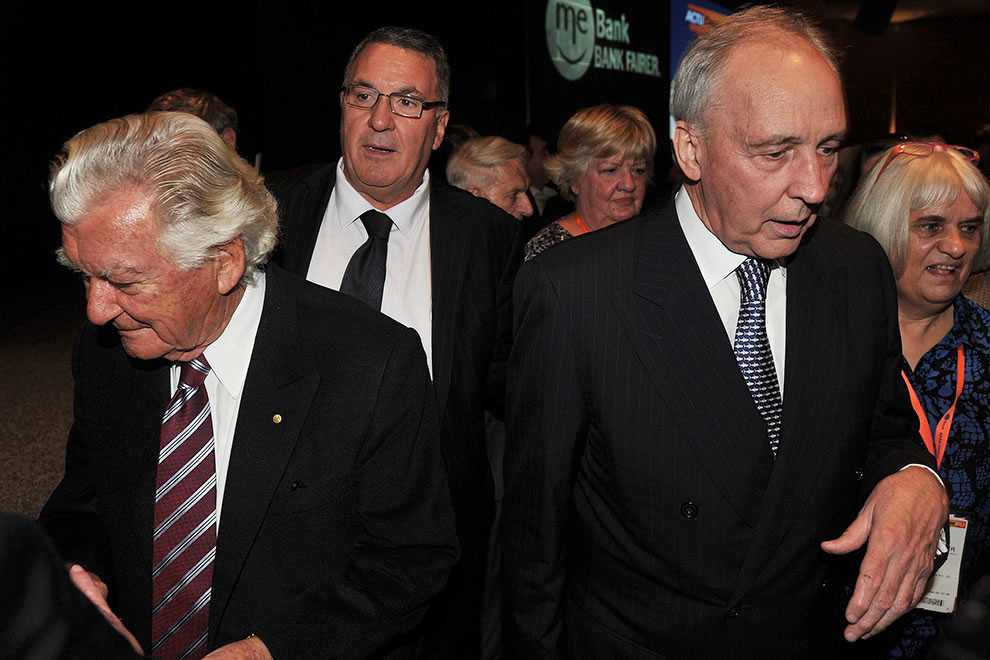 Fee bonanza: as prime minister and treasurer, Bob Hawke (left) and Paul Keating (right) presided over the creation of Australia’s compulsory superannuation scheme. They are shown here at the close of the ACTU National Congress dinner in Sydney on 16 May 2012. Paul Miller/AAP Image

While the budget “debate” drags on in Canberra, there are increasingly plain signs that, economically speaking, we might be on entirely the wrong tram.

Two senior economists at the Bank for International Settlements, or BIS, have surveyed recent research about the impact of the finance sector on the rest of the economy. They draw two conclusions. First, higher growth in the finance sector reduces growth across the economy as a whole. “In other words,” they write, “financial booms are not, in general, growth-enhancing, likely because the financial sector competes with the rest of the economy for resources.” And, second, “credit booms harm what we normally think of as the engines for growth” – those sectors of the economy fuelled by research and development. Add in the experience of the financial crisis, the two economists say, and there is “a pressing need to reassess the relationship of finance and real growth in modern economic systems.”

The punchline was provided in the Economist’s coverage of the report. Serious trouble starts, it says, when private sector debt exceeds 100 per cent of GDP or when the finance sector accounts for more than 3.9 per cent of total employment. Australia is at or very near those benchmarks.

So what does that mean for our economy? Usually we think of financial excess in terms of the risks borrowers take. Borrow too much, go bust. Like John Elliott. Or Greece. The BIS researchers focus instead on the wider impact. Too much finance, they think, stifles innovation (or productivity, in econspeak) because finance is conservative. Investors and lenders like to bank bricks and mortar, or at least solid incomes. They tend not to like untried ideas, or intangible assets, like science or new technology.

When finance gets too big, the economy grows the equivalent of a beer belly. Good times attract smart people to work in hedge funds or big banks or investment banking. Fewer people and less money go into engineering or science or areas where research and innovation are central. The economy ends up without the diversity and healthy innovation that provide balance and vitality.

In Australia two factors seem to have contributed to a conspicuous increase in the finance sector’s share of the economy. First, the deregulation of banks fundamentally changed the supply of credit. Then compulsory superannuation inflated the supply of equity to share markets and, possibly more importantly, drove a huge amount of fee income into the hands of people who might otherwise chase careers in something productive.

Ignoring for a moment the consequences of exaggerated household debt and compulsory super, the BIS perspective points to another important issue. What’s happened to the economy?

There is no doubt that Australia has ridiculously over-invested in private housing. Most of it is existing housing, so the rising debt is largely a function of asset price inflation. Similarly, the bulk of the trillions forced into super is invested in existing businesses.

Two problems are immediately apparent. The first is obvious. We know that the global financial markets are volatile. We know that Australian markets have attracted very large swathes of foreign cash. And we know that in 1997 this sort of behaviour caused huge problems for the so-called “tiger” economies to our north. (Indeed, some observers are worried that the end of “quantatitive easing” by American authorities offers a hint of déjà vu.) When the tide goes out for us – and the collapse of commodity prices is certainly that – Australia doesn’t look quite so rock solid.

As the BIS demonstrates, there is a second area of risk. Australia already had an over-reliance on commodity exports. We have always known that demand for those exports is cyclical, and we are witnessing a cyclic downturn. But the muscled-up finance sector adds to the problem because it has detracted from diversity and added asset inflation to the mix.

We live in a world of technological change, of rapid innovation and market restructuring. Yet Australia has a big exposure to volatile capital markets and commodity markets, with finance secured largely against historical assets.

There are plenty of arguments for changing the tax and regulatory treatment of Australia’s finance sector. But possibly the best one is the need to shift away from risky overreliance on finance and debt and to promote diverse economic activity better suited to the world we live in.

What the BIS and others, like the Financial Times’s Martin Wolf, have demonstrated is that the cycles of financial trouble we have seen over the past couple of decades have grown into an entrenched malaise. The novelty of home loans in Port Macquarie made cheap by foreign debt were an early instruction. The US savings and loans debacle was another. We’ve now had a global crisis, the effects of which still resonate. Yet in Australia we have skipped along unchecked and evidently unheeding.

It is clear that Australia needs to reduce risk and promote economic diversity. Soon. That is not a matter only of dealing with budget deficits; it must also involve a serious go at the distortions we have allowed to entrench during a very comfortable few decades. •