In the second part of our series on this month’s German election, our correspondent wonders about what has been left out of the debate 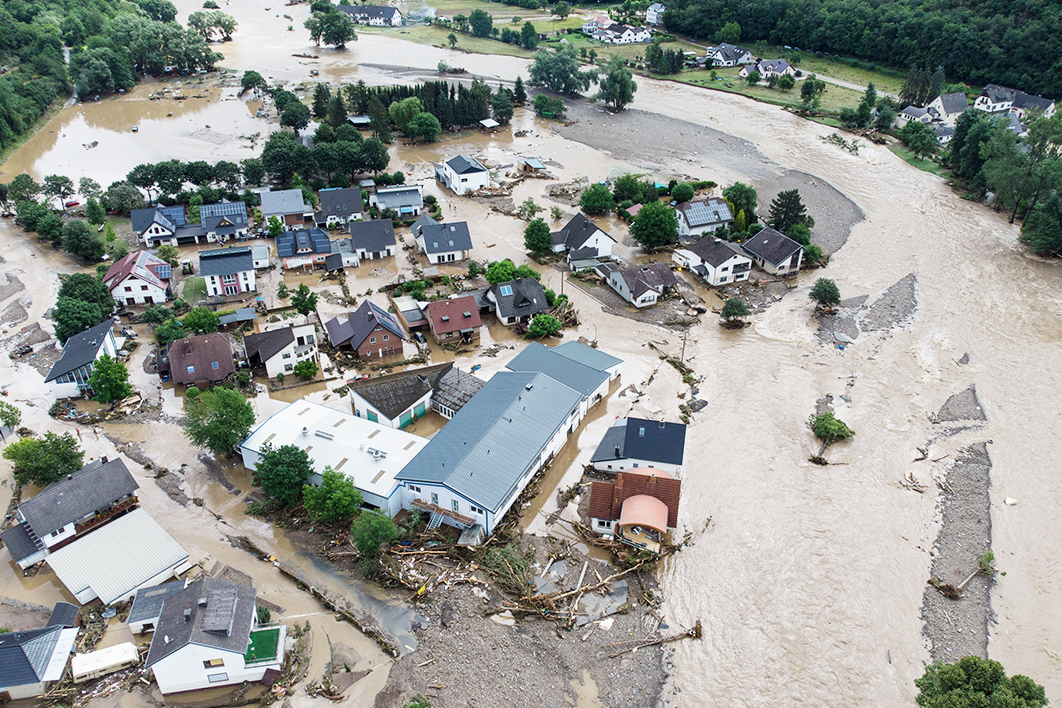 The partly submerged village of Insul, in the southwest German state of Rhineland-Palatinate, after massive rainfall in mid July. Boris Roessler/dpa via Getty Images

It matters who wins the German election on 26 September, not only to those entitled to cast a vote but also to people elsewhere. It matters to people living in the European Union whether Germany will push for greater European integration; how it plans to hold accountable governments, like Poland’s and Hungary’s, with little respect for human rights; and whether it favours a further enlargement of the Union. It matters not just to my neighbours in the Hamburg suburb of Altona, but also to people in Altona, New York, and Altona, Melbourne, whether Germany will be an advocate for a sustainable and just world.

After the second world war, Germans often cared a lot about how they were perceived by others. They worried a great deal, for example, about the reputational damage caused by the pogrom-like riots in Rostock and Hoyerswerda in the early 1990s. Many were proud when commentators adopted Hungarian writer Péter Esterházy’s description of Germans as “world champions of dealing with the past.” They liked the fact that Angela Merkel was perceived as the only Western leader willing and able to stand up to Donald Trump. Some were even proud when Merkel was praised abroad for her decision in September 2015 not to close Germany’s borders, and for her refusal to flinch when Germany admitted close to 900,000 asylum seekers that year, although they might have had misgivings about Merkel’s policy when talking to fellow Germans.

Given this history, it’s surprising that the attention paid by people outside Germany to the election that will determine Merkel’s successor has not been matched by the contestants’ references to the world beyond their borders. True, both Christian Democrat Armin Laschet and the current frontrunner, Social Democrat Olaf Scholz, recently paid visits to French president Emmanuel Macron. But those encounters were hardly noticed, and weren’t in any case used by either candidate to talk in any detail about Germany’s crucial relationship with France or the Berlin republic’s future role in the European Union.

The candidates’ apparent blind spot was in evidence on Sunday night, when more than eleven million viewers watched a televised debate between Laschet, Scholz and Annalena Baerbock of the Greens. As the only one of the three pre-election debates aired by both the public broadcasters during this campaign, it was widely seen to be the most crucial event in the lead-up to the election. During its ninety minutes the candidates made brief comments about the foreign policy credentials of the left-wing Linke, but otherwise didn’t mention Germany’s role in the world and their own ideas for the European Union, for Germany’s relationship with China, Russia and the United States, and for the country’s relations with the developing world. Not once.

The absence is also reflected elsewhere in the campaign. The only posters I have seen that refer to foreign policy — yes, posters are still important in German election campaigns — have been Linke posters in East Germany demanding “peace with Russia.”

While correspondents for the international media have been trying to fathom what a government led by Scholz or Laschet would mean for the rest of the world, the politicians engaged in the campaign, including international law graduate Baerbock, seem oblivious to the wider world. That’s not because the world has been of no concern recently. The scandalous mismanagement of Germany’s withdrawal from Afghanistan by three senior government ministers — Social Democrat foreign minister Heiko Maas, Christian Democrat defence minister Annegret Kramp-Karrenbauer and the Christian Social Union interior minister Horst Seehofer — could have been one of the key issues of the campaign. It wasn’t. The fact that Germany leased planes in June to evacuate Afghans who would be in danger following a Taliban victory, but then cancelled the evacuation because Seehofer’s ministry objected to Afghan employees of the German military entering Germany before the completion of all relevant paperwork, received barely any attention.

The absence of the European Union and foreign policy from Sunday’s debate is partly the responsibility of the two journalists who chaired it. But it’s also a reflection of the stature of the three candidates. It makes even Angela Merkel, a skilful diplomat but hardly a foreign relations visionary, look farsighted.

In one sense, though, the three candidates’ failure to mention other countries comes as a pleasant surprise. All three acknowledge that Germany must do its share to meet the targets of the 2015 Paris Agreement. They might differ about how to do that, but none of them follows the lead of other world leaders by declaring that Germany’s approach relies on what China, the United States or other major emitters of greenhouse gases do. No mention was made on Sunday of Polish coal-fired power stations or Finnish and French reliance on nuclear energy. Emissions in Russia weren’t cited as an excuse for a lack of ambition by a future German government.

Part of the reason the candidates didn’t try to shift responsibility is that the country’s highest court committed the government to a comparatively ambitious German target earlier this year. The court found that Germany’s existing policy would unduly restrict the choices available to today’s young people after 2030. In a press release, the court said that:

fundamental rights are violated by the fact that the emission amounts allowed until 2030… substantially narrow the remaining options for reducing emissions after 2030, thereby jeopardising practically every type of freedom protected by fundamental rights… The legislator should have taken precautionary steps to ensure a transition to climate neutrality that respects freedom — steps that have so far been lacking.

The ruling forced Merkel’s coalition government to legislate to bring forward its climate neutrality goal to 2045 (rather than 2050, as in the legislation passed in December 2019) and its emissions-reduction goal to 65 per cent (rather than 55 per cent) by 2030.

So far, so good. The bad news is that a detailed study conducted by DIW Econ, the German Institute for Economic Research’s consulting company, has found that the 2021 climate protection legislation would not ensure Germany’s compliance with the Paris targets.

That study wasn’t concerned with the gap between the climate neutrality law and what the German government had committed to in Paris (although it identified such a gap); rather, it asked whether the election manifestos of the Christian Democrats, the Social Democrats, the Free Democrats, the Greens and the Linke included measures commensurate with the revised legislation’s targets. It concluded that a government formed by any of the first three of those parties — assuming they were in a position to implement their programs — wouldn’t even come close to meeting the targets. Perhaps more surprising was the study’s finding that the measures envisaged by the Linke would also fall short. And the Greens? The study found that their measures, while more effective than those of the other four parties, would also be insufficient.

Climate change is the election campaign’s most important issue. That’s particularly the case after the floods in the west and southwest of the country in July, which claimed 180 lives and swept away houses, bridges, roads, rail tracks and other infrastructure. The repairs and rebuilding will, on current estimates, cost about €30 billion. Yet all main contestants in this election campaign pretend that climate neutrality can be achieved without any impact on consumers’ hip pockets and without changing the way we move around, eat, work or build our houses. Christian Democrats and Free Democrats even maintain that neither new taxes nor new public debt will be needed.

While the composition of Germany’s parliament is determined by the percentage of votes won by parties that exceed the 5 per cent threshold, 299 seats are decided in individual electorates, where the first-past-the-post system applies. Electorate #158 (Sächsische Schweiz–Osterzgebirge), in the southeast of the country, gained notoriety in the 2017 election because it was one of three electorates won by the candidate of the far-right populist Alternative for Germany, or AfD.

A debate last week between six of the candidates vying to win electorate #158 was even more dispiriting than Baerbock, Scholz and Laschet’s encounter on Sunday night. When it came to climate change, the Green and Social Democrat candidates, perhaps trying to appease the local audience, were even reluctant to endorse their own parties’ manifestos. The Greens candidate went as far as declining to rule out building new nuclear power stations to compensate for the decommissioning of coal-fired generators. (Perhaps in an attempt to reciprocate, the pro-nuclear AfD candidate then demanded more bicycle paths.)

Nearly all the questions from the audience came from local politicians or supporters of minor parties that hadn’t been invited to the forum. Towards the end of the debate, though, a seemingly unaligned audience member — a teacher in a vocational school — put up his hand. His students had instructed him to ask the candidates how they thought Germany would meet the Paris agreement’s 1.5°C target. He hadn’t come unprepared: he had read the DIW Econ study and knew that whatever the parties were offering wasn’t going to be enough. He also had first-hand experience of the frustration of young people, many of them too young to vote. The candidates acknowledged that frustration, but not one of them had a satisfactory answer to the question.

Given the reluctance of politicians to promote painful decisions, the teenagers asking hard questions and demanding answers are our best bet. Fridays for Future activists, who have already had considerable influence on German policymaking, are mobilising for nationwide demonstrations on 24 September, two days before the election. “This election provides us with a once-in-a-century choice,” the group’s Luisa Neubauer wrote. “The political decisions taken during the next four years will determine the fate of my generation.”

And while they are at it, maybe Fridays for Future activists could also raise the issue of Germany’s place in the world — not in order to provide excuses for it to sit on its hands, nor to lecture the world about a German model. Global injustice is one of the key impediments to a sustainable world, and a vision for global sustainability and justice is sorely needed.

In any case, the world may soon look towards Norway, rather than Germany, when contemplating how to tackle climate change and accelerate the transformation of economies. Yesterday, an alliance of parties led by Labour’s Jonas Gahr Støre won the Norwegian election with a mandate — and seeming resolve — to end Norway’s reliance on fossil fuel production and export, with one potential government party, the Greens, demanding an end to fossil fuel production by 2035. That should interest others whose countries rely on the production coal, oil and gas, including the people of Altona, New York and Altona, Melbourne. •

Klaus Neumann works for the Hamburg Foundation for the Advancement of Research and Culture and is an honorary professor at Deakin University.