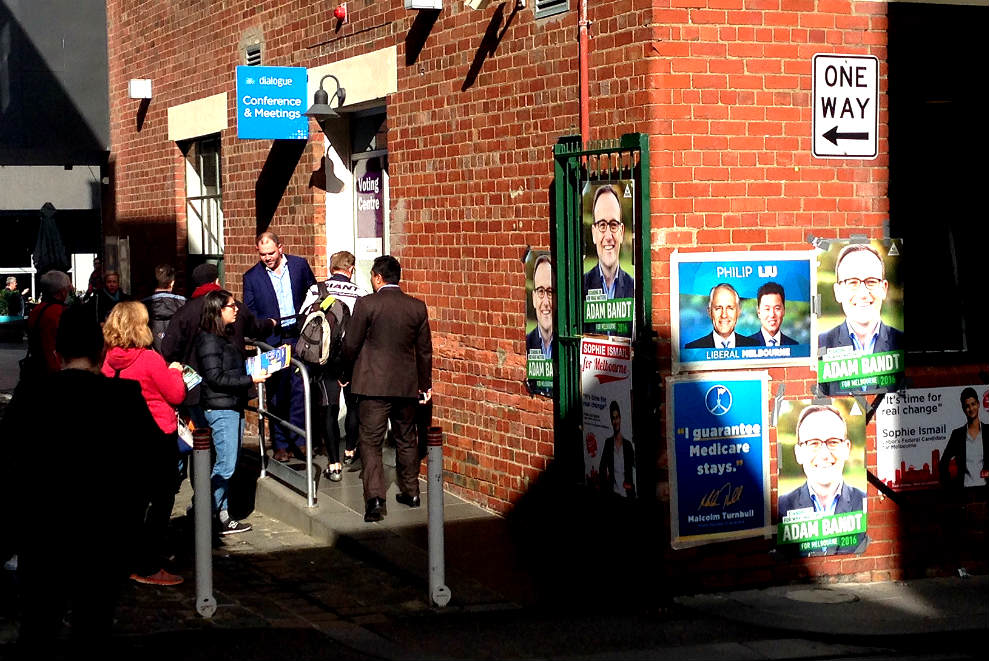 At a recent house party in Melbourne’s inner-north – deep in Adam Bandt territory – 100 per cent of voters surveyed had already voted or intended to vote early in the federal election. Despite my less-than-robust methodology and a demographic sample you could throw a blanket over, early voting has become the thing. And it has been growing at such a rate, in Victoria particularly, that there’s little or no reliable research to tell us who’s doing it and why.

In the United States, where they’ve been at it in significant numbers for a while, they call it convenience voting. In the states where it’s available, it’s mostly designed to reduce barriers and motivate people to vote at all. In general, though, researchers have found it hard to pinpoint whether convenience voting lifts participation rates or whether it’s just an option taken up by those who were going to vote anyway. The evidence leans a bit towards the latter.

In Australia, that question is largely irrelevant; we have to vote. And it might as well be convenient. We do so much else to accommodate the time-poor lives we’re told we all lead – catch-up television, education, shopping, work – so why not do democracy at our leisure too?

Some pundits don’t like it. They say that those who go early cast their vote with less information than those who wait. They’re right, of course. Consider that the polling places opened on 14 June, three days before the third leader’s debate and more than a week before Labor officially launched its campaign. Consider, too, that the Liberal Party only launched its campaign at the weekend. A week is a long time in politics, and there’s plenty of time yet for Mark Latham to get involved or at least for someone to burst out of a radio studio with his patented campaign handshake and shed a vote or two.

The naysayers also worry about the fickle types among us, and the combined effect of opportunity and outrage. Perhaps you’re one of those nitpicky types. Perhaps you’re too principled for your own good. Perhaps you’ve just heard David Feeney has forgotten about a Northcote property he owns that’s worth a couple of million dollars. Perhaps you’ve just seen David Speers or Leigh Sales turn a hitherto political heavyweight into a quivering mess with a simple question about, I dunno, metadata or something. And perhaps you live a short walk from an early polling station. So you march in five minutes later to teach that buffoon a lesson. Have you really thought that one through?

Such fluid concerns, though, are really only the province of the swinging voter. For the rusted on, early voting makes a lot of sense. The queues are shorter, for one – and that seemed to be the principal reason among the voters in Fitzroy, at least. Though with the figures tracking at an historically large number of votes cast prior to Saturday, and from fewer polling stations, shorter queues are no guarantee.

Many also worry that going to the polls before election day means something more profound is lost: that we lose the ritual of the nation converging on our schools and our town and church halls, as one, to perform our most democratic duty. On this measure it might be the P&C associations and the local church and community groups that have the most to lose. Sausage sizzles and cake stalls across the country are staring at a large reduction in takings this Saturday. Perhaps they’ll pick up the slack at Bunnings, where the early voters will no doubt be swanning about unencumbered by urgent civic duties.

Early voting isn’t quite as simple as it sounds. You still need an excuse to do it. On that the rules are pretty clear. You must be eligible. If you’re going to be away on election day, or in prison, if you live in remote parts of the country, or are ill, working or indisposed in various other ways listed on the Electoral Commission’s website, then you can vote early.

Proving you’re in one of these categories is not necessarily the most onerous of tasks, however. When I early-voted – and yes, that’s a verb now – I was asked if I was eligible not why. “Yes,” I said. “Okay,” said the polling booth staffer, who then ticked me off the roll, handed me the ballot papers and directed me to the booths. I was in the car and on the way home in less than five minutes.

After the 2014 state election in Victoria, in which around 30 per cent of electors went to the polls before election day, the Palmer United Party candidate for the Northern Metropolitan Region, Maria Rigoni, sought to invalidate the election in the Victorian Supreme Court. She argued that the Victorian Electoral Commission was derelict in its duty when it failed to require early voters to make an explicit declaration of their eligibility. While Rigoni was unsuccessful both in the election and in the courts, her shot across the procedural bows appears to have scared no one at the Australian Electoral Commission – at least if straw polls at parties in Melbourne’s inner north are any guide. I was the only one surveyed who had even been asked if they were eligible. It turns out that I was the only one who had a valid reason, too.

While it’s not hard to see why many of us are attracted to the idea of early voting, it’s not as easy to see which party will benefit most. Given that the rise in popularity of early voting is no secret and that Turnbull called the election on a day when most of the nation is on school holidays, you would have to think that the Libs like the idea. They certainly don’t fear it; that much is clear. In any case, if a bird in the hand means anything then Turnbull should probably get as many votes in the box as possible before he loses any more skin in the personal approval ratings, particularly when Shorten keeps surprising people with his apparent talent for campaigning.

Returning to the question about who is taking the early-voting option and why, the speed of its uptake so far precludes a definitive answer. My Swinburne University colleague Nathaniel Reader says that there was a 300 per cent increase in early voting in Victorian state elections between 2006 and 2014. He suspects, like many others, that those who are voting early are the inner-city professional types from Melbourne and Sydney. On that point, though, like any good researcher, he also suspects that as the data piles up he may well be wrong. •