Election myths in the making (and the latest state of play)

The count goes on, and history is already being written and rewritten. Tim Colebatch looks at three more myths 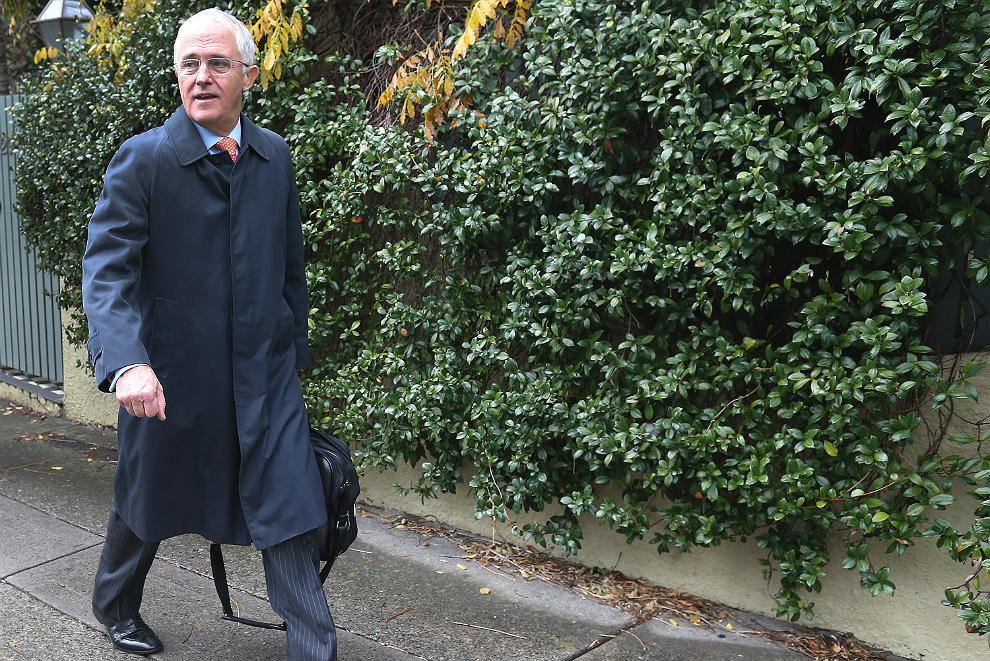 Another day of uncertainty: prime minister Malcolm Turnbull outside his home in Sydney this morning. David Moir/AAP Image

The lack of any serious counting in the last two days hasn’t inhibited a forest of myths spreading up about what happened and why. I tried to lop down a couple of them on Sunday, but let’s look at three more.

First, an update: the counting since Saturday night has made no significant change to the status of seats in doubt, except that Labor’s position has improved in Hindmarsh, though it’s still too close to call. Of the eight closest seats fought out between the two parties, Labor leads in Forde (by 0.11 per cent), Hindmarsh (0.40), Herbert (0.60), Capricornia (0.68) and Cowan (0.73). If it won them all, it would have seventy-two of the 150 seats in the new House. But I suspect at least one will drift back to the Liberals, and maybe more.

The Coalition is leading in Chisholm (by 0.05 per cent), Gilmore (0.23) and Dunkley (0.32). Given that postal votes and pre-poll votes generally favour the Coalition, especially in seats it already holds, I’m assuming that it has held Robertson (0.73), Petrie (0.78), Peter Dutton’s seat of Dickson (0.88) and La Trobe (0.93), although Antony Green still lists Petrie as undecided. If the Coalition wins all seven seats, it too would have seventy-two seats in the new House.

While the Electoral Commission has yet to produce any figures for votes after preferences in Cowper, scrutineers from both sides agree that Rob Oakeshott has narrowly lost his bid to return to Parliament. In Grey, the commission has counted just six booths in Port Augusta. They favoured Nick Xenophon’s candidate Andrea Broadfoot, who comes over as a sort of Spencer Gulf variant of Cathy McGowan; but it’s a very diverse electorate, and the seat is too close to call.

The bottom line is that the Coalition will probably have more seats than Labor, but not a majority. It will now have to chat up the parties it’s been telling us are too dangerous to be trusted with any role in government. Okay…

Let me deal with three of the myths doing the rounds.

1. Senator Cory Bernardi, Liberal dissident: The Coalition has lost a million votes and Labor half a million votes to smaller parties like One Nation because the big parties are no longer reflecting the conservative instincts of voters.

Fact: Senator Bernardi is comparing the progress count of votes this time to the final count in 2013. So far just over eleven million formal votes have been counted, roughly 75 per cent of those enrolled. The final count last time was almost thirteen million votes, from 93 per cent of eligible voters.

But where did the voters leave the Coalition, and who did they vote for instead?

In percentage terms, comparing apples and apples, the big shift was in Senator Bernardi’s own state of South Australia, and it was to the Nick Xenophon Team, which won 21 per cent of the vote. Almost half of that came from disillusioned Liberals such as Rebekha Sharkie, former Liberal staffer and now Xenophon MP for Mayo. I don’t think those voters were looking for a more conservative option.

Fact: Pauline Hanson’s One Nation has won just 1.3 per cent of votes for the House nationally, less than a quarter of the vote the Palmer party scored in 2013. In the Senate, a fairer test because One Nation stood in all states, it has won 4.1 per cent, compared to Palmer’s 4.9 per cent.

That’s one in twenty-five voters. One Nation can’t be ignored, but it will probably end up with the votes of just over half a million Australians. It’s still a fringe party. And Hanson’s agenda has more in common with Tony Abbott’s than Clive Palmer’s.

3. Numerous sources: The Coalition and Labor might do a deal to change the order of election of senators so that more of their senators get six-year terms, and more Greens and crossbenchers get three-year terms.

Under the constitution, the Senate has the task of deciding which half of the twelve senators elected from each state get six-year terms and which half should get three-year terms. The obvious answer, of course, is to decide it by order in which they were elected – but this is high politics, so the temptation is to rort it.

The suggestion is that the two big parties might repeat the deal they did after the 1987 double dissolution, when they ordered the Australian Electoral Commission to use half-Senate election quotas to determine which senators receive six-year terms. The effect of this was to deprive most Australian Democrat senators of six-year terms.

Fact: Whoever suggested this has not done the sums. While none of us know what the Senate outcome will be, let’s assume – since I can’t see a better assumption – that preferences have no impact on it, and senators are elected in the order they stand now.

Under this assumption, the new 76-member Senate would be: Coalition 30, Labor 27, Greens 9, and crossbenchers 10 (Xenophon 3, One Nation 3, plus Jacqui Lambie, Derryn Hinch, the Christian Democrats in New South Wales and the Liberal Democrats in Queensland. (I am certainly not predicting that, by the way.)

The 36 senators elected to six-year terms would be: Coalition 14, Labor 12, Greens 5 and crossbenchers 5 (Xenophon 2, Lambie, Hanson and Hinch). The 40 who would face the voters again in 2019 (including four from the territories) would be: Coalition 16, Labor 15, Greens 4, cross-benchers 5.

The actual order of election, by contrast, would give the Coalition 16 long-term senators, Labor 13, the Greens just 3 and the crossbenchers 4 – with Derryn Hinch given a three-year reduction in his sentence.

In other words, if Labor and the Coalition fiddle with the order of election as they did last time, it will only hurt them. Why? Because in 1987 they won almost 85 per cent of Senate votes between them, whereas right now they have just 65 per cent. •