Falling between the cracks of temporary migration

A British nurse who wanted to make her life in Australia now finds herself caught out by circumstance, writes Peter Mares 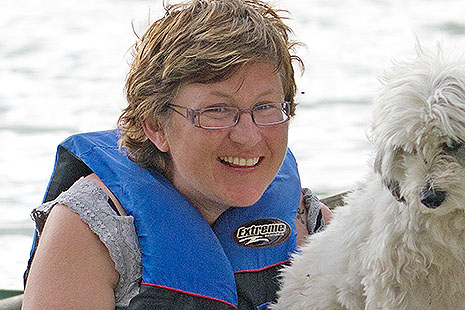 “I’m not asking for any favours,” says Claire Hewitt.

WHEN thirty-four-year-old British nurse Claire Hewitt migrated to the Northern Territory in 2009, it was no rash decision. Claire and her photographer husband Terry had spent the previous year travelling around Australia by campervan, deciding where they wanted to live and what they wanted to do. Although Claire could easily have landed a job in a capital city, they fell in love with the outback. “Working in Sydney or Melbourne would have been just like staying in London,” she says. “I wanted to do something that I couldn’t do anywhere else.”

The couple settled in Alice Springs and Claire took up a position with the NT health department, working on trachoma treatment and prevention in remote Aboriginal communities. It was important work. Trachoma, an easily treatable and preventable eye disease, is the leading cause of infectious blindness in fifty-nine of the world’s poorest countries. With Indigenous communities still afflicted, Australia is the only developed country in the world where trachoma is still active.

Claire would have preferred to migrate to Australia on a permanent visa, but she says that option wasn’t open to her. Authorities in the Northern Territory reported bad experiences sponsoring health professionals for permanent migration: unprepared for local conditions, new arrivals would often decamp to cooler or more urbanised locations. Claire says the health officials led her to believe that if she came on a 457 temporary skilled work visa they would sponsor her for permanent residency after twelve months. “We were in the middle of the paperwork for our application for permanent residency at the time of the accident,” she says.

In May 2010, driving along the Tanami Highway to the remote community of Mt Liebig, Claire lost control of her work vehicle and it rolled six times. Trapped for some time, she was lucky to survive massive head injuries, thirty-three chest fractures and severe nerve damage to both arms.

She was hospitalised for three months and underwent major surgery, including an operation to transfer a pectoral muscle from her chest to her shoulder to replace a damaged deltoid and restore her ability to raise her left arm – a procedure performed only once before in Australia. Eighteen months of full-time rehabilitation followed, and much of her routine still revolves around regular appointments with therapists and specialists. Since the accident, Terry has been devoted almost full time to her care.

It’s a nightmare story, but Claire’s recovery has astounded doctors. Les Koopowitz, a professor of neuro-psychiatry at the University of Adelaide, says that Claire “continues to attain the type of progress seldom realised following such a serious, devastating and debilitating accident.”

The result, says Claire, is “a lifetime of disability, pain and medical conditions.” She accepts that she can’t return to her old job in remote communities, but is nevertheless determined to return to nursing in some capacity. “Right from the beginning they almost had to hold me down to stop me trying to go back to work,” she says. “In a way I haven’t helped myself. I tried to do too much too soon. My brain has to relearn things and that takes time.”

Throughout her rehabilitation, says Claire, the NT health department assured her that it would fully support her eventual return to work, tailoring her duties where necessary. In early 2012, she believes, the department prepared and lodged the first two stages of an application for her to gain permanent residency under the Regional Sponsored Migration Scheme.

‬Recently, however, everything changed. According to Claire, the department indicated to her that it would no longer employ her or sponsor her application for permanent residency after her current temporary visa expires in June 2014. Unless another option can be found, Claire and Terry will have to leave Australia in the middle of next year.

The implications are profound. As the rehabilitation specialist consulting on her case, Les Koopowitz says that interruptions to Claire’s “continuity of care and environmental stability” could seriously compromise her recovery and render a return to meaningful work “an unrealistic challenge.” ‬‬‬‬‬‬For her part, Claire says that if she can’t stay in Australia, “I will not only lose access to the extensive medical and rehabilitation team that have worked with me for the past three years, but I will also lose any realistic chance of returning to my career as a nurse.”

Claire’s crash was a workplace accident: she was at work and driving a government vehicle at the time. As a result, NT Workcover pays her medical bills and she receives 75 per cent of her salary. Her legal advice is that if she has to return to Britain then the workers’ compensation scheme will continue to pay all medical bills relating to her accident. But her salary entitlements are a different matter.

If Claire leaves Australia, however, her salary entitlements will cut out after two, or possibly four, years. After that time, she believes, she would have to get by on a British disability pension.

Claire says that the Territory health department has told her she no longer fits the criteria for sponsorship as a skilled migrant. Whether or not she does, Claire wants them to sponsor her, even if the immigration department is almost certain to knock back the application. The health department’s cooperation is vital because Claire’s best hope of staying in Australia may now lie in ministerial intervention. There is a catch 22 here: the immigration minister can’t use his discretion to intervene in a case – even one with compelling and compassionate circumstances – until all other avenues of appeal have been exhausted. Until the Territory sponsors an application that fails, Claire has nothing to appeal against and can’t get to first base.

ALTHOUGH Claire’s case is unique, the bind she finds herself in is not exceptional, according to her migration lawyer, Chris Johnston. Her uncertain fate is one of the unintended consequences of the rise of temporary migration in Australia. “Most of our legal and institutional structures are based on an assumption that if you are not a short-term visitor to Australia, then you are either a citizen or a permanent resident,” Johnston says. “But there are an increasing number of migrants living and working in Australia on a long-term but temporary basis who do not fit these categories.”

One example is the fate of international students caught out by the collapse of the Swan Services cleaning group. According to United Voice, the union that covers Swan’s employees, the company went into administration owing around 2500 staff $2.3 million in unpaid wages and $7.2 million in annual leave. In theory, workers who are out of pocket can seek assistance under a federal government scheme known as the Fair Entitlements Guarantee. But the scheme only covers permanent residents and citizens. International students, who made up a big chunk of Swan’s workforce, are ineligible. Some are owed close to $3000.

New Zealanders can also be caught out, even though they have the right to live and work in Australia indefinitely. In the summer of 2010–11, many New Zealanders who were long-term residents of Queensland were initially excluded from the federal government’s emergency assistance to victims of the floods and Cyclone Yasi. They may have lived in Queensland for up to a decade, had kids, bought a house or established a business, but because they did not fit the Social Security Act’s definition of an Australian resident they were ineligible for emergency relief payments. The inequity of their treatment was rendered all the more stark by the New Zealand government’s conduct in response to the 2011 Christchurch earthquake a few weeks later: Australians resident in that city were offered the same emergency and unemployment benefits as New Zealand citizens.

The ensuing controversy on both sides of the Tasman prompted the Australian government to offer an “ex-gratia assistance payment” to New Zealanders who had been refused help. Similar payments have been made in response to subsequent emergencies, like the 2013 floods in Queensland and the NSW floods, but the overall system of eligibility for Australian Government Disaster Recovery Payments remains unchanged.

While the details of Claire’s situation are specific and particularly tragic, Chris Johnston says he represents many 457 visa-holders and other temporary migrants “who have fallen into legislative or regulatory cracks” that weren’t previously apparent. “Unfortunately, I have seen a pattern over time, where a small percentage of employers use the finite nature of a temporary visa to try to avoid obligations they would otherwise have to meet.”

In response to questions about Claire Hewitt’s case, the NT health department issued a statement saying that it is “committed to exploring whatever employment options are available including immigration visas that Ms Hewitt and the Department can satisfy criteria for.” The department denies that it had “previously committed to sponsoring Ms Hewitt” for permanent residency under the Regional Migration Scheme but noted that it had sponsored her current two-year temporary visa “to enable her to continue her rehabilitation and planned return to work.” It said it would continue to provide “extensive support to Ms Hewitt’s rehabilitation and employment” and continue to discuss “all options that are available.”

The NT Workers Rehabilitation and Compensation Act defines rehabilitation as “the process necessary to ensure, as far as is practicable… that an injured worker is restored to the same physical, economic and social condition in which the worker was before suffering the relevant injury.” In Claire Hewitt’s case, the only way to give proper meaning to that definition is to enable her to remain in Australia.

“I’m not asking for any favours,” she says. “Just the same support as would be offered an injured worker who was already lucky enough to be a permanent resident or an Australian citizen. Our lives are here. We didn’t come here with the intention of having a holiday, we moved ourselves lock, stock and barrel.” And after all that she and her husband Terry have been through, Australia feels more like home than ever. •