Fear puts One Nation back where it counts

The count has finished, writes Tim Colebatch, and Pauline Hanson has done better than expected. But has she the smarts to use that power? 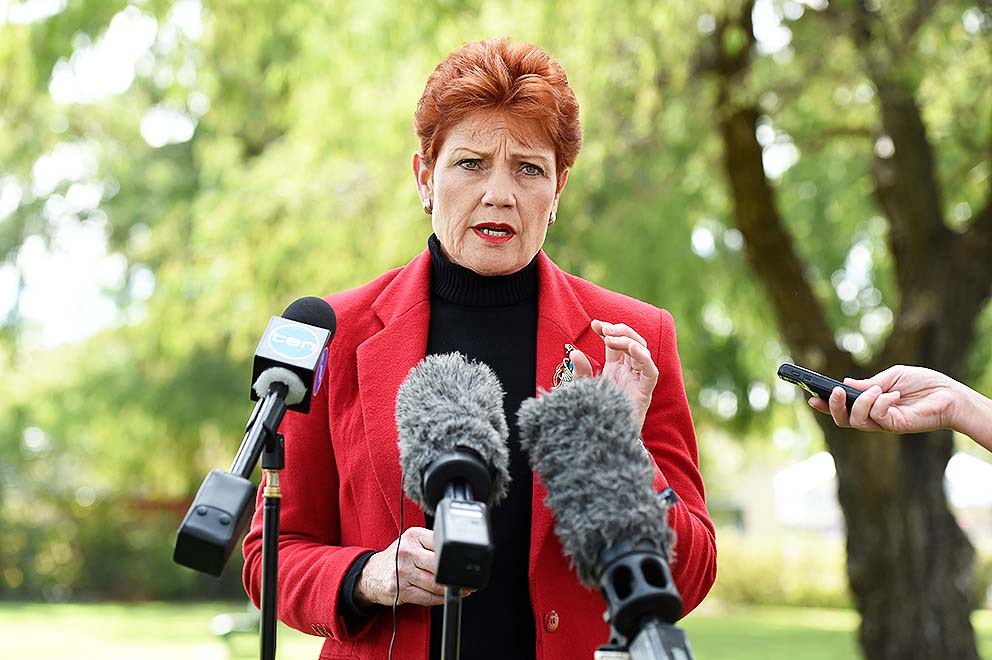 When Pauline Hanson stood for the Senate in New South Wales in 2013, she won just 1.2 per cent of the vote. It was her seventh consecutive defeat at federal and state elections, and her most humiliating. We thought she was finished.

But as terrorist attacks on the West have increased, Pauline Hanson has come back. At last year’s Queensland election, she came within cooee of winning the seat of Lockyer. And now Queensland has given her two seats in the Senate, and Australia has given her four Senate seats, and she has more power in federal parliament than she has ever had before.

Hanson almost won five seats. In Tasmania, One Nation lost the closest race of the whole election by just 141 votes. And hers is a party that is essentially about one woman. Whatever she decides at the time, almost by definition, becomes party policy. Right now, her key policy is to stop Muslims coming to Australia.

No one saw this coming, not on this scale. Sure, with the quota for election lowered to 7.7 per cent for the double dissolution, it looked like Hanson herself would finally win a Senate seat, after failing so often in the past. But two seats in Queensland, another in New South Wales, a fourth in Western Australia, and almost a fifth in Tasmania – no rebel party on the right has achieved that since the DLP was at its peak half a century ago.

On Thursday, the Electoral Commission announced that Hanson’s running mate Malcolm Roberts had unexpectedly secured the final seat in Queensland. On first preferences, the Liberal Democrats had looked set to take it, but they were swamped by the deluge of preferences going to One Nation, and to Family First, which won its second runner-up plate in two days.

One Nation also coasted home to take the second-last seat in New South Wales, with Liberal Democrat senator David Leyonhjelm hanging on as preference surges for Family First and the Shooters Party, in turn, fell short, leaving him with only the Christian Democrats to beat, which he did with ease.

The left had no candidate in the final stages. The Greens reached their solitary quota in the middle of the count, Labor had enough for four quotas but little more, and actress Lynda Stoner, running for Animal Justice, was the best of the rest but fell far short of joining her ex-fiancé Derryn Hinch on the crossbenches.

If Labor and the Greens oppose a piece of government legislation, it will pass the Senate only if the Coalition can persuade Hanson, Xenophon and at least two of the other four to support it. On most issues, Leyonhjelm and Day do support it, but in many debates, getting Hanson and Xenophon onto the same side will be challenging.

It’s possible that the forgotten cause of this double dissolution, the legislation to reinstate the Australian Building and Construction Commission to police the construction industry, will be one piece of legislation that both the micro-parties will support. Xenophon voted for it earlier this year, and Hanson is assumed to be in favour.

The most striking thing about One Nation’s success this time was the strength of the preference flows it received from other parties. It suggests that, while One Nation won only 4.3 per cent of first preference votes for the Senate – far short of the 9 per cent it won in 1998 – it has probably at least that number of sympathisers again who are well-enough disposed to give it their preferences.

It was a different story in South Australia, where the Xenophon team had the best of the preference count, and different again in Victoria, where Family First came from nowhere to finish as runner-up for the final seat. In this new system of preferences in the Senate, voters have been liberated to write them as they like, and it’s allowed us to show how different each state is from each other.

When Pauline Hanson stood for the Senate in 2001, she won 10 per cent of the vote in Queensland but hardly any preferences; under the old system, the parties decided our preferences, and few were willing to risk public odium by giving preferences to Hanson. In those days, her simple ignorant racism, so typical of the Australia she grew up in, was seen as beyond the pale.

It is quite likely that if the voters of 2001 had been free to give their own preferences, Pauline would have become Senator Hanson fifteen years ago, giving her a platform for her views throughout the second half of the Howard government. Had that happened, history might be a little different. The WorkChoices debacle might never have got to first base. The 2007 election might have had a different result.

Now she has come back as a sort of retro favourite, a bit of the old Australia that makes some feel warm and sentimental – and that was reflected in the preferences on 2 July. By contrast, the Christian Democrats and Liberal Democrats won relatively few preferences. Like it or not, the voters have made Hanson the leader of the fringe to the right of the Liberal Party. But does she have the political smarts to take advantage of her new power? I doubt it.

Pauline Hanson shows no sign of having changed. Her views have not mellowed, or become better informed. The reason why one-in-eleven Queenslanders voted for her this time, as against just one-in-eighty at her last Senate bid, is that the stress of long years of war between the West and one Islamic group or another, or many, has frayed the edges of our tolerance, creating the disunity and distrust that provides a fertile ground for a politician like her.

In her earlier period of influence, Hanson proved flaky. Almost everyone close to her was forced out sooner or later: John Pasquarelli, David Eldridge, David Oldfield. Remember how quickly the Palmer United Party became Palmer Disunited? What are the odds that One Nation will soon become Two Nations, Three or even Four Nations?

Her senators owe their places to the accident of a double dissolution. In a normal half-Senate election, only Hanson would have been elected. Next time, they will face a half-Senate election, and will probably fail to gain re-election. They may well feel they have nothing to lose if they cut free well before that and make their own decisions, rather than be bound to their idiosyncratic, emotionally fragile leader.

Would Malcolm Turnbull’s job be easier if the four One Nation senators remain loyal to their leader, or if they go their own ways? Bearing in mind how rarely Glenn Lazarus and Jacqui Lambie supported the government after they broke with Clive Palmer, it would probably prefer One Nation to stay together. Yet governing Australia that way will be hard.

So, that’s it. The count is now all over. It has been full of oddities. The only place the Coalition picked up a Senate seat was in Victoria, yet its vote there fell by 7 per cent, the biggest fall in any state. By contrast, it lost a seat in Western Australia, where its vote rose by 3.9 per cent. Figure that one out.

For the most part, the Senate was decided on first preferences alone. Only two senators got there on second and later preferences: Malcolm Roberts in Queensland, and Bob Day in South Australia. Most parties’ preferences went all over the shop, even when voters had their how-to-vote cards in their hands.

A classic example occurred when Gavin Marshall won Labor’s fourth senate seat in Victoria, and his 1327 surplus votes were distributed among the seventeen remaining candidates. Labor’s card directed preferences to the Sex Party (as a reward for preferencing Labor in its inner-suburban battles against the Greens), then to Hinch, then to the Greens. But only 22 per cent of Labor voters complied, while the rest preferenced the Greens, Hinch, Animal Justice, Family First, the Liberals… anyone and everyone.

Similarly in New South Wales. When Labor’s fifth candidate was eliminated, the biggest slice of his preferences went to the Liberals, who were certainly not on Labor’s how-to-vote card. And when the fifth Liberal dropped out of the count in South Australia, only 38 per cent of Liberal voters followed the party card and preferenced Senator Day. Almost as many voted instead for Xenophon, and a similar number for one of Labor, the Greens or One Nation.

The new system has put power back in voters’ hands. That has allowed the undercurrent of racism that is one of many minority views here to surface and make itself heard, emphatically.

Well, just as it might have been better for the Howard government had Pauline Hanson won that seat in 2001, maybe it’s better for us that it’s happened that way now. Bring the issues out into the open. Expose Pauline Hanson’s arguments to the full light of day. In the long term, it might be good for us. But in the short term, it will make good government harder. •