Odds are that the ACT government will be returned this weekend, but the balance between Labor and the Greens could shift 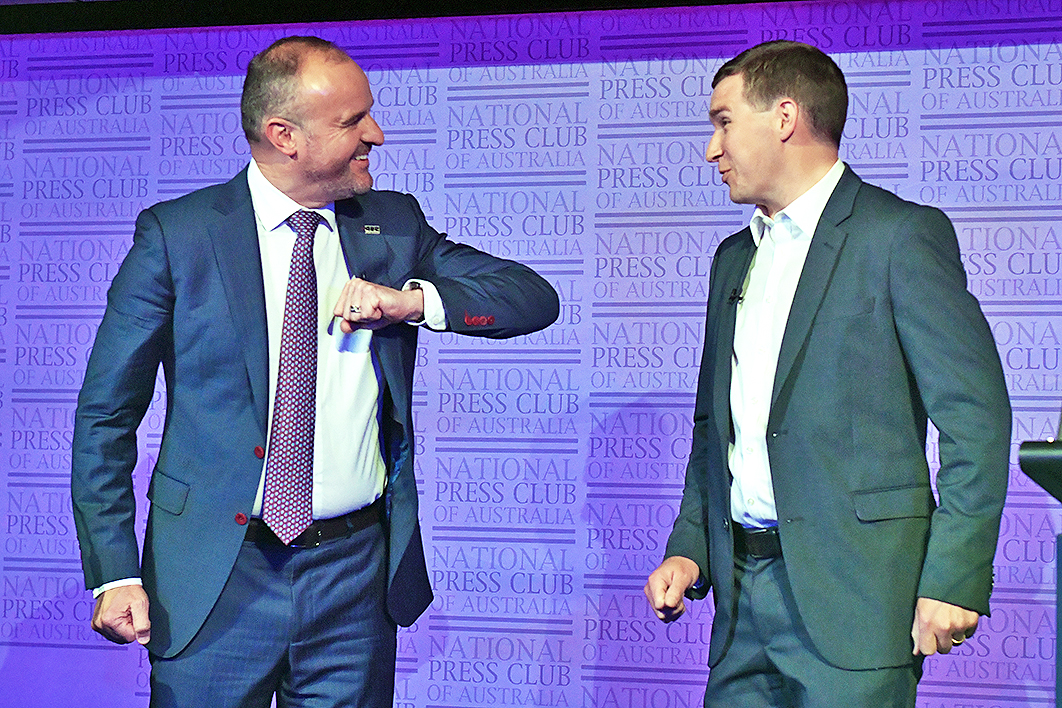 New Zealand and the Australian Capital Territory go to the polls on Saturday, with Queensland two weeks later, followed closely by the United States. Of all those polls, the one attracting least attention among Australians is in the ACT.

For one thing, it’s solid Labor (or now Labor–Greens) territory; the Liberals have not won an election here since 1998. For another, who outside Canberra cares? It’s the second-smallest Australian jurisdiction, with just 430,000 people, most of them reasonably well-off, some of them even working for the Australian Taxation Office.

And yet this relatively rich bit of Australia plays a part in our political fabric. The current Labor–Greens government has been there in one form or another since 2001, and has pioneered a number of reforms. Under Jon Stanhope as chief minister, it passed Australia’s first Human Rights Act and made repeated attempts (frustrated by the Howard government) to legalise same-sex marriage.

More recently, the ACT has become the only Australian jurisdiction to phase out stamp duty on conveyancing and replace it with taxes on land (mostly as higher rates). And it is the only one that claims emissions-free electricity generation (not strictly true, but its electricity consumption is now outweighed by the electricity generated by its solar and wind farms).

It is also a unique example of a harmonious Labor–Greens coalition government in Australia. It is very likely that one day, whatever the relevant Labor leader says before the election, there will be similar coalitions of the left in other Australian jurisdictions — even in federal parliament. It could even happen in Queensland on Saturday. The ACT election deserves a little more attention than it’s getting.

The government is expected to get back. No polls have been published since the election began, but the last one, by uComms in August, implied that result. A quick survey of the bookies’ odds on Wednesday found that, on average, they gave Labor a 78 per cent chance of leading the next government. That’s better than Joe Biden’s chances of ousting Donald Trump (an understated 66 per cent among bookies) or Annastacia Palaszczuk’s chances of re-election (62 per cent), though it’s no match for Jacinda Ardern’s (92 per cent).

Yet you would not guess that from local media coverage. It’s been talking up the Liberals’ chances as if they’re more like a 50–50 bet. This probably reflects boredom with and grumbling about a government that’s been there for so long: a boredom that local media are particularly prone to feel.

But sometimes that boredom and grumbling spreads throughout the electorate. We saw that in 1995 when Kate Carnell, now the federal small business ombudsman, led the Liberals to an upset win by telling voters to “make Labor listen.” Well, the voters did that all right: Labor MLAs had to listen to Liberal ministers announcing all government decisions for the next six years.

There’s a chance of that, if only an outside one, as I explained in an earlier piece.

The ACT Legislative Assembly has twenty-five members elected in a Senate-style election, with five members elected from each of five districts: Yerrabi (the Gungahlin district in the outer north), Ginninderra (Belconnen, middle north), Kurrajong (the inner suburbs, mostly north of the lake but some south), Murrumbidgee (Woden/Weston Creek, middle south) and Brindabella (Tuggeranong, outer south).

The major parties each need only 33 per cent of the vote to secure two seats in each district, so the real battle is for the final seat. In 2016, Labor won it in Yerrabi and Ginninderra, the Greens in Kurrajong and Murrumbidgee, and the Liberals in Brindabella. A coalition of twelve Labor and two Greens MLAs formed the government, and eleven Liberals the opposition.

The Liberals need only two extra seats to win government. That sounds feasible enough, particularly as a favourable redistribution and the retirement of a Greens member have given them a good chance of taking the final seat in Murrumbidgee. They hope to win a third seat in Yerrabi as well to give them a majority, but on my estimates that requires a landslide swing of 5.5 per cent or more.

Plan B is the possibility of forming a government with their one-time party leader Bill Stefaniak, who has emerged from twelve years in political retirement to form the Belco party, based on stirring up resentment that “Belco” (Belconnen) is not getting its fair share of the ACT government’s spending. He has been joined on the party’s ticket for Ginninderra by other former candidates, including Chic Henry, founder of Canberra’s Summernats festival, notorious for endless car burnouts, boozy behaviour, loud music and thousands of car-loving hoons coming from near and far. (Nothing about Canberra defies its typecasting better than Summernats — a working-class festival in what must be Australia’s least working-class town.)

Parts of Belconnen are as working-class as Canberra gets, and the district has good reason to feel ignored. It’s possible that the Belco party can funnel those resentments to win a seat. But it feels like an old men’s show, and previous attempts by ex-Liberal MLAs to establish their own party flopped badly.

In the two other seats, the Liberals are on the defensive. The party’s victory in Brindabella last time was the closest race of the election. And the same redistribution that has strengthened its position in Murrumbidgee has weakened it in Kurrajong. At last year’s federal election, the Greens outpolled the Liberals on the new boundaries; if they could repeat that vote — a big if — they could win two seats in Kurrajong to the Liberals’ one.

This is an unusual election. By the end of today, more than half of the electorate will have voted already, out of a fear of the coronavirus, even though it is three months since Canberra last had an active case. Their votes have been cast electronically, so the result of the election, including preference distributions, is expected within an hour or so of the close of counting at 6pm on Saturday night.

But beware: the early figures could be a bit misleading. Last time, a third of all votes were cast in pre-poll centres, and 39.2 per cent of them were for the Liberals, who got only 34.8 per cent of votes cast on the Saturday. The Greens, by contrast, won only 8.8 per cent in the pre-poll centres but 11.2 per cent on the day. Labor also did slightly better on the Saturday. The left, despite its vegan fringe, clearly likes democracy sausages more than the right, and its vote will improve during the count.

Liberal leader Alistair Coe has not repeated Kate Carnell’s deceptive call for a protest vote against Labor, but he has copied another of her winning strategies: promise to make hefty cuts to taxes and charges while increasing spending across the board. It worked for Carnell, but while chief minister Andrew Barr effectively pinned Coe down on the implausibility of this in the leaders’ debate, it is not an issue that has gained traction with the media or, as far as one can tell, the voters.

Yet, in reality the ACT has no fiscal room to expand — indeed, former Labor chief minister Jon Stanhope has been lashing Barr for lax fiscal management. Coe’s explanation that he would pay for his promises by attracting more people to build homes in the ACT rather than across the border is laughable. A Liberal government could well lead to a banquet of broken promises, Joe Hockey–style.

That aside, nothing too dramatic is at stake. After the PR success of Canberra’s first internal rail track, a tramline from the city to Gungahlin — which has proved popular, although expensive for taxpayers — Labor and the Greens are planning an even more expensive tramline to the south, first to the parliamentary triangle and then to Woden. The Liberals are not openly opposing the plan, but clearly don’t share the enthusiasm. If they win office, and the fiscal screws are applied, that could be vulnerable.

At the same time, the contrast between the two leaders is striking. Barr is the first openly gay man to lead an Australian government; last year he married his long-time partner, Anthony Toms. Coe, by contrast, although in his mid-thirties, was the only Liberal leader anywhere in Australia to vote against same-sex marriage at the referendum.

A survey of candidates’ views by Ian McAllister of the ANU found that Coe, on social issues, is the most conservative candidate standing at this election: strongly against abortion, strongly against euthanasia, and strongly in favour of governments paying for school chaplains and churches being able to refuse to perform same-sex marriages. This conservatism sparked a brief rebellion last year, with some MPs urging colleagues to replace him with the more liberal Elizabeth Lee, but she lacked the numbers.

Of all the places for Tony Abbott’s version of Liberal values to be reborn, the progressive ACT would seem one of the most unlikely. If Coe wins, it will be an interesting term.

One last curious thing about ACT elections. The ballot papers rotate the names of party candidates so the parties cannot put out a ticket showing them in order of priority. It’s a great system for those who know which party they want but want to choose which candidate. But it means that the most dangerous candidates for sitting Labor and Liberal MPs are not their opponents, but their colleagues.

Ask planning minister Mick Gentleman. He lost his seat of Brindabella in 2008 to one of his running mates, Joy Burch (now the speaker of the Assembly). And both of them are now seen as vulnerable to a new generation of Labor candidates running alongside them.

No Liberal member in the ACT has ever been defeated by his or her party losing a seat. No Labor candidate has lost that way since 1995. But in the elections since then, five Liberal and five Labor MPs have been deposed by colleagues running alongside them on the ticket. On past practice, that will probably happen again on Saturday, though we don’t know who or where.

The uComms poll in August, which implied that the government will be re-elected, had the Greens possibly gaining seats from Labor. For what it’s worth, my guess is that the bookies’ odds are about right. Labor and the Greens are likely to win, but the Liberals are an outside chance. •

Tim Colebatch is a regular contributor to Inside Story, and former economics editor and commentator for the Age.