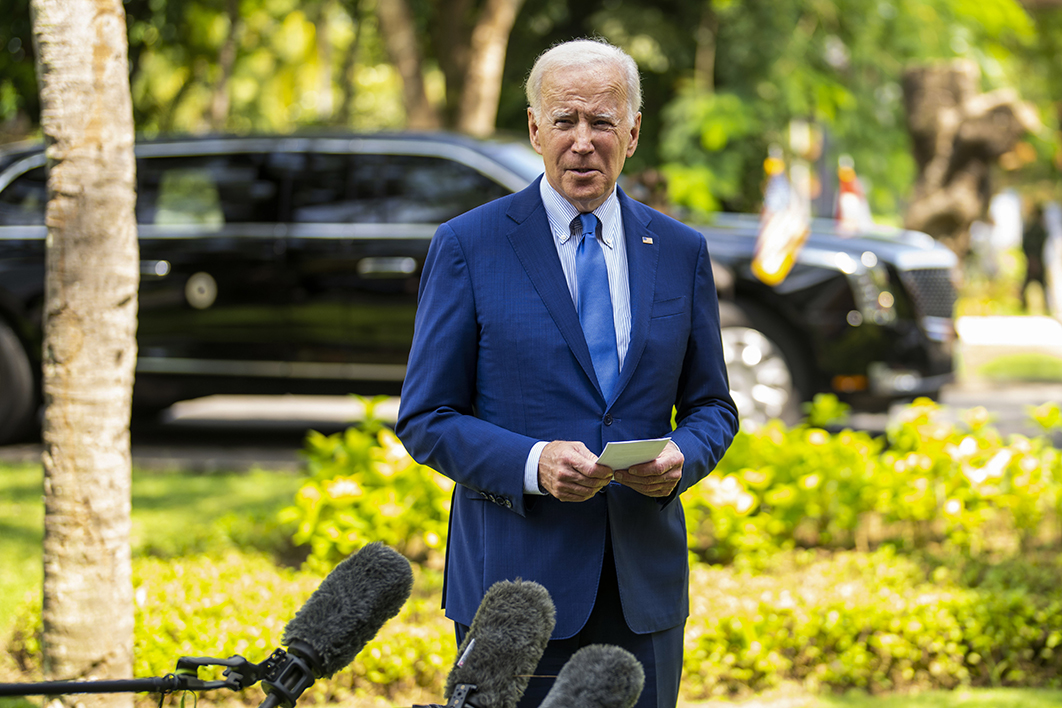 Resurgent: US president Joe Biden, shown at a meeting of G7 and NATO leaders in Bali today, faces a different Congress from the one widely predicted. Doug Mills/The New York Times via AP

Votes in the US midterm elections are still being counted; Republicans are openly brawling over congressional leadership positions; former president Donald Trump and his handpicked candidates are being widely blamed for his party’s failed “red wave.” And yet the former president used a sometimes incoherent speech in Florida today to announce he is running for president in 2024.

Midterm elections — treated by many voters as a referendum on the sitting president’s agenda — are always fraught with danger for the party in the White House. This year the Republicans ran on issues like crime and the economy, seen as their bailiwick, and hoped to capitalise on lingering resentments over Trump’s 2020 election loss and the partisan divide opened up by the Democrats’ probing of the 6 January invasion of the Capitol. But Trump changed the dynamics fundamentally when he inserted his candidates, his policies and indeed himself into the campaign.

The expected Republican wave failed to eventuate not just federally but also in the states. Democrats lost fewer House seats than in any midterm election under a Democratic president in forty years. They retained the Senate and performed better in midterm elections for state governors than at any time since 1986.

With angry Republicans blaming Trump, the former president’s role as party kingmaker is under challenge from Florida governor Ron DeSantis, who emerged as the big Republican winner.

The election results have immediate consequences for the remainder of Joe Biden’s first term. They will help shape the 2024 elections, and provide important clues as to how changing demographics will influence the future of American voting.

Those polls also revealed other factors driving support for Democrats: anger at limits on abortions, concerns about healthcare costs and gun control, and a high turnout among young voters. As Biden had warned in a prime-time address ahead of the elections, the very future of the nation was on the line in the face of election denial, voter intimidation and political violence. His concern was no doubt driven by the large slate of extremist candidates for federal and state offices endorsed (and largely handpicked) by Trump on the basis of their loyalty to him and their support for his grievances.

Voters in crucial battleground states, perhaps tiring of the endless rhetoric about a lost presidency during a period of high inflation, rejected Trump’s election-denying candidates. Voting was peaceful, with few technical glitches and only muted Republican claims of election fraud. Biden summarised election day thus: “It was a good day, I think, for democracy.”

That optimism overlooks the fact that the president will have to deal with a Republican-controlled House of Representatives less interested in working cooperatively than in investigating and probably impeaching him, his family and Democratic leaders like Nancy Pelosi. Biden must push hard to get key elements of his agenda — and legislation essential for the operation of government, including a lift in the debt ceiling — enacted by the lame-duck Congress that lasts only until new members take their places in January.

The House promises to be a can of worms for both sides of politics. For all that Trump’s election slate has been deemed a failure, at least 145 of the Republicans elected to the House are election deniers. Importantly, they will constitute the majority of the GOP caucus.

This means that current House minority leader Kevin McCarthy might not have sufficient support to realise his ambition of becoming speaker; the position could instead be taken by someone as contentious as Representative Jim Jordan, a founding member of the House Freedom Caucus and the top Republican on the House judiciary committee. With a slim majority, Marjorie Taylor Greene and other so-called MAGA Republicans will make electorally unpopular demands of the leadership. But perhaps the chaos that is almost certain to ensue will work in the Democrats’ favour in 2024.

In the Senate there is a very real possibility that the Democrats can win fifty-one seats, but this is dependent on incumbent senator Raphael Warnock winning a run-off against Herschel Walker in Georgia. With a Republican-controlled House, Democratic control of the Senate is essential if Biden is to win confirmation of any future appointments. A one-seat majority on the relevant committees will help, and will also provide a buffer during difficult negotiations with senators Joe Manchin and Kyrsten Sinema, who often resist toeing the Democrats’ line.

In the states, meanwhile, Democrat victories will provide a bulwark against the erosion of electoral rights. Democrats won important gubernatorial races in Arizona, Wisconsin and Pennsylvania, along with secretary of state positions (responsible for overseeing elections) in Minnesota and New Mexico. They also took the majority in state houses in Minnesota and Pennsylvania, long controlled by Republicans. For the first time in modern history, Democrats were elected to all twenty-six statewide and federal offices in Rhode Island and Massachusetts.

In Michigan, governor Gretchen Whitmer, who has been heavily targeted by Trump, made abortion rights central to her winning campaign and Democrats won control of the state legislature for the first time since 1984. Michigan’s election lines have been determined since 2018 by an independent, nonpartisan panel.

In Florida, by contrast, incumbent governor DeSantis had made sure new electoral districts were heavily gerrymandered in his party’s favour He defeated his Democrat opponent Charlie Crist by nearly twenty percentage points and delivered four more Republican seats in the House of Representatives.

DeSantis, who contends that his state has become a (Republican) “promised land,” has positioned Florida in the vanguard of many of the nation’s most polarising culture war fights. His election success sets him up for a fascinating presidential primary battle — and simmering warfare — with Trump.

While DeSantis may not emerge as the Republican saviour, Trump’s status as party kingmaker is no longer secure. Republican leaders are openly blaming election losses on his poor-quality candidates and failure to financially support their efforts. Trump has responded with his usual denial of responsibility, lashing out at his advisers. Many wealthy potential donors are looking at other potential presidential contenders, including former secretary of state Mike Pompeo, Virginia’s governor Glenn Youngkin, South Carolina’s senator Tim Scott and even former vice-president Mike Pence.

Where the money goes will be an important factor for the Republican presidential primaries. Trump’s early entrance into the field is as much about getting first access to donors as it is about trying to fend off other contenders — and is perhaps also an attempt to avoid prosecutions.

In a few short weeks (or sooner if Trump has his way) the United States will be plunged into the maelstrom of presidential primaries, and political operatives will start strategising for 2024. Far-thinking Republicans must recognise that rusted-on Trump supporters — mostly older, white and without a college education — are a diminishing demographic. On the other hand, Democrats can’t take for granted the longstanding support of Black voters or ignore evidence that Hispanic support is slipping.

Across the nation, the share of non-Hispanic white voters is declining. America’s youngest voters, millennials and generation X, are more racially and ethnically diverse than older generations. At the same time, the increasing proportion of voters aged sixty-five and over (19 per cent by 2024) will force a focus on social security and Medicare, programs Republicans have said they will cut.

The fevered gerrymandering and vote-suppressing efforts of Republican governors and legislators reveal their understanding that only these forms of election-rigging stand between their party — at least in its present form — and oblivion. Even the Republican-dominated US Supreme Court has pitched in, allowing states to use unlawfully gerrymandered congressional maps for last week’s elections and currently hearing a case that would undermine the Voting Rights Act.

The midterm results have delivered a sense of relief to many, including leaders in other democracies, but they also highlight the work still needed to protect American democracy and America’s place in the world. The new balance in Congress is hardly a prescription for the national unity that Biden seeks to promulgate, and the looming internecine warfare between Trump, DeSantis and the Republican leadership will work against any efforts to bridge the party divide. •