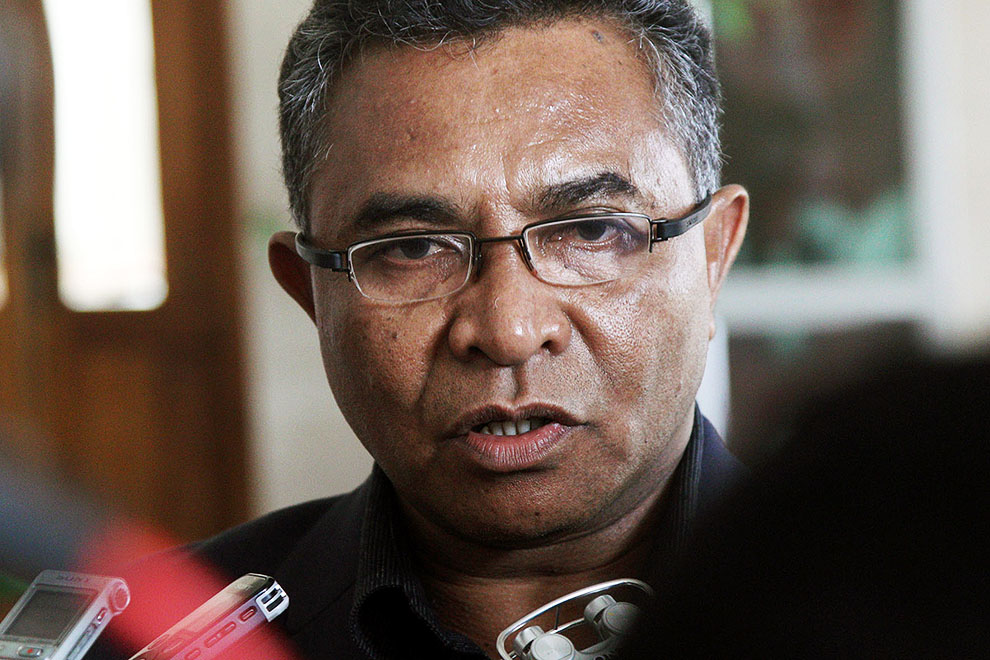 Former resistance leader Xanana Gusmão, who has been prime minister of Timor-Leste since 2007, has once again surprised political pundits, this time by anointing Rui Araújo, a high-profile member of the opposition party FRETILIN, as his successor. Sworn in on Monday alongside the new PM were three new ministers from FRETILIN, who will join a smaller, revamped ministry dominated by Gusmão’s own CNRT party. Though Gusmão’s retirement has been on the cards since 2013, and a government of national unity has been mooted for many years, the outcome is still remarkable. Relations between the two major parties were openly bitter as recently as 2012.

Gusmão himself was sworn in yesterday as the new planning and investment minister, a move designed to provide stability as the new government takes it first steps. Given his enormous stature in East Timorese politics, his departure from centre stage – negotiated over recent months with the FRETILIN leadership and within his own party – was always going to be a watch point for political stability. This extraordinary remaking of the government, elected in 2012, is clearly designed to smooth the transition from the 1975 generation of leaders that has dominated post-independence politics.

Despite coming from the opposition party, Rui Araújo’s relationship with Gusmão dates back to when he was a clandestine messenger within the student resistance in the early 1990s. After training as a doctor in Indonesia and working in Dili in the late 1990s, he undertook a master of public health in New Zealand, focusing on models for a new health system for Timor-Leste. He then served as health minister in the first post-independence government from 2001 to 2007, and was briefly deputy prime minister. A widely respected figure, Araújo was a political independent until he joined FRETILIN in 2010. Most recently, he was a senior adviser to health and finance ministries, and is regarded as a highly competent and incorruptible administrator. These aspects of his public reputation were evidently critical to Gusmão’s choice.

That Gusmão was able to persuade his own party to back this deal, given the known leadership ambitions of its other senior figures, is a testimony to the importance of his charismatic authority to its political fortunes. That the main players have come together in the national interest is a tribute to the party itself. In his swearing-in speech on Monday, the new PM described the outcome as “a more pragmatic logic of serving the national interest… the coming together of wills, experience and skills will allow us to overcome the traditional political and democratic contest, so that we may meet the challenges faced by the country.” He also warmly acknowledged the 1975 generation of leaders – Gusmão, former PM Mari Alkatiri and José Ramos-Horta, along with current president Taur Matan Ruak – as “older brothers,” signalling this moment as one of generational change.

Along with the prime ministership, FRETILIN takes the key portfolios of foreign affairs and agriculture. The appointment of Hernani Coelho, a former ambassador to Australia, to the foreign affairs portfolio shows the priority of resolving key issues in that relationship. The community can expect business as usual on two key foreign policy issues that unite the major Timorese parties: a maritime boundary determination with Australia, and a fairer return from the Greater Sunrise oil and gas field. It is believed that Rui Araújo also had a hand in picking new ministers in the critical portfolios of health and finance. CNRT continues to dominate the rest of the ministry, with senior figures Agio Pereira and Dionisio Babo-Soares retaining major coordinating ministries that will see them continue to wield considerable power in the reformed government.

Though FRETILIN insists the new ministers will serve as individuals rather than as party representatives, there is a strong sense that these moves formalise the consensus approach that appears to have prevailed between Gusmão and the FRETILIN leadership over the past year. Some commentators worry, not without justification, that accountability may suffer under what is effectively a “grand coalition.” For more traditional Timorese outside the capital, however, this attempt at a consensus politics resonates far more closely with local notions of political legitimacy than does the winner-takes-all model of party competition, often seen as divisive and foreign.

If Timor-Leste doesn’t quite have a government of national unity after yesterday’s ceremony, then it certainly has a power-sharing executive. Rule-based power-sharing executives have been attempted elsewhere in the region, with mixed results, as a means of balancing the potentially destabilising consequence of disputes over prized ministerial positions. In New Caledonia – where any party with more than six seats in the fifty-two seat chamber must receive a proportionate share of ministries – the arrangement has worked well, though it was a failure in Fiji in 1990s when the largest party handed out essentially trivial ministries to its opponents. In the Timorese context, if the new power-sharing executive performs well, there is a strong chance it could be taken to the scheduled 2017 elections with relatively minor modifications. It would prove a formidable opponent.

For the other, smaller parties in Timor-Leste’s former governing coalition, the outcome of Gusmão’s changes is far less appealing. While Fernando “Lasama” de Araújo, the leader of the Democratic Party, or PD, retains a senior coordinating ministry in social affairs, other figures – notably former agriculture minister Mariano Sabino – are absent from the new ministry, which could yet cause a split within the party. Former president José Ramos-Horta has called on the PD to “show humility, wisdom and statesmanship and throw their full support to Rui Araújo and Xanana Gusmão in this new political arrangement.”

The smaller Frenti-Mudança – a FRETILIN breakaway – has fared worst of all. Former foreign affairs minister José Luís Guterres has exited the ministry, and another former minister, Jorge Teme, refused the token offer of a vice minister position. Strategically, Gusmão’s new informal alliance with FRETILIN has allowed him to reconstitute the ministry, removing under-performers and those under a cloud of corruption charges. It is strongly rumoured that former finance minister Emília Pires has left the country.

Less commented on is the change within FRETILIN itself. Though the party retains the same executive leadership, Gusmão’s retirement as PM has in a sense brought forward a generational shift there as well – albeit in the form of an opportunity too good to refuse. While one commentator has memorably likened the move to “Tony Abbott stepping down to become a minister in a government led by Bill Shorten,” in practice it is more like one led by Tony Burke or Tanya Plibersek. While he remains general secretary of FRETILIN, former prime minister Mari Alkatiri now leads a new authority charged with developing the exclave of Oecusse: a deal that effectively sees him depart centre stage at the same time as Gusmão. FRETILIN’s more conciliatory attitude since the CNRT’s clear victory in 2012 has been another critical factor in bringing together the two major forces of Timorese politics. Both Gusmão and Alkatiri will remain key figures in the background during this transformation.

The new government faces major challenges. Domestic and observers will be watching to see whether PM Araújo can begin the long process of steering the country away from big-money megaprojects, and the overspending of Timor-Leste’s finite oil and gas revenues, towards an era of rule-based funding, greater transparency and improved policy performance. Given public finances and procurement are in a worse state than is publicly acknowledged, this will be a big job. The former government’s effective but unsustainable strategy of “buying peace,” which placed a premium on social stability, also created a host of potential losers in any transition to more sustainable infrastructure budgets.

In the meantime, the key constituency of veterans of the independence struggle remain onside with the new government, perhaps cautiously, as they see their substantial sway potentially diminish. Gusmão’s continuing presence in the key portfolio of planning and investment, which comes with oversight of the National Development Agency, will see him remain centrally involved in infrastructure policy, and will aid the new government in its dealings with veterans. Gusmão’s move from direct responsibility for defence and police, meanwhile, is a significant indication of confidence in stability, despite ongoing tensions with a restive veterans group led by disaffected former guerilla commander Mauk Moruk.

In his swearing-in speech on Monday the new PM wasted no time in signalling a change in direction, pledging to “fight the culture of bureaucratisation in public administration” and promising a “new bureaucratic order that is leaner, more professional, more technical and less politicised.” He also strongly signalled a new economic direction and a halt to the “waste and the ineffective use of public monies,” with a welcome commitment to economic diversification in neglected areas such as tourism, agriculture and fisheries. He pledged to increase tax revenues to reduce Timor-Leste’s overwhelming dependence on petroleum funds. Other themes of the speech included commitments to finalising the long-delayed land and property law and prioritising education spending, particularly to encourage women to enter the labour market. A welcome commitment to fighting domestic violence also featured.

The new government is likely to be strongly welcomed by Timorese outside the political elite as the best chance of unifying the country in the post-Gusmao era. This is especially important because popular allegiances to CNRT or FRETILIN still echo the divisive regional affiliations that erupted in the 2006 crisis, albeit much diminished in recent years. The new power-sharing arrangement will make it very hard for disruptive elements to make trouble on that scale again. It also represents an acknowledgement from Gusmao that the price of “buying peace” – in the form of massive infrastructure contracts and pensions to groups that might otherwise upset the apple cart – is unsustainable. Gusmao is perhaps all too aware that his own incomparable brand of charismatic legitimacy, which has bound the country together since 2007, is not transferable. If Rui Araújo represents anything to the Timorese, it is policy competence and technical expertise; in that sense, his appointment represents an attempt to move to a different type of political legitimacy, rational–legal in orientation, less reliant on the incumbent’s personal history and more dependent on performance and outcomes.

No one should doubt how difficult this transition will be for the East Timorese polity. Though all parties should be congratulated for the reorientation, much of the credit must go to Gusmão himself. Read one way, the new government reinforces his legacy, once again uniting the factions of the former resistance movement, as he did so effectively during the Indonesian occupation. These latest developments are a reminder of why he remains a towering figure in Timor-Leste’s long struggle for nationhood. •